Accessibility links
U.S. Probes Abuse Allegations Under Worker Visa Program Recent allegations that a McDonald's franchise abused students, who came to the U.S. on cultural guest work visas, is reactivating the debate about how immigration reform should deal with guest workers, and whether the State Department's efforts to curb abuse have failed. 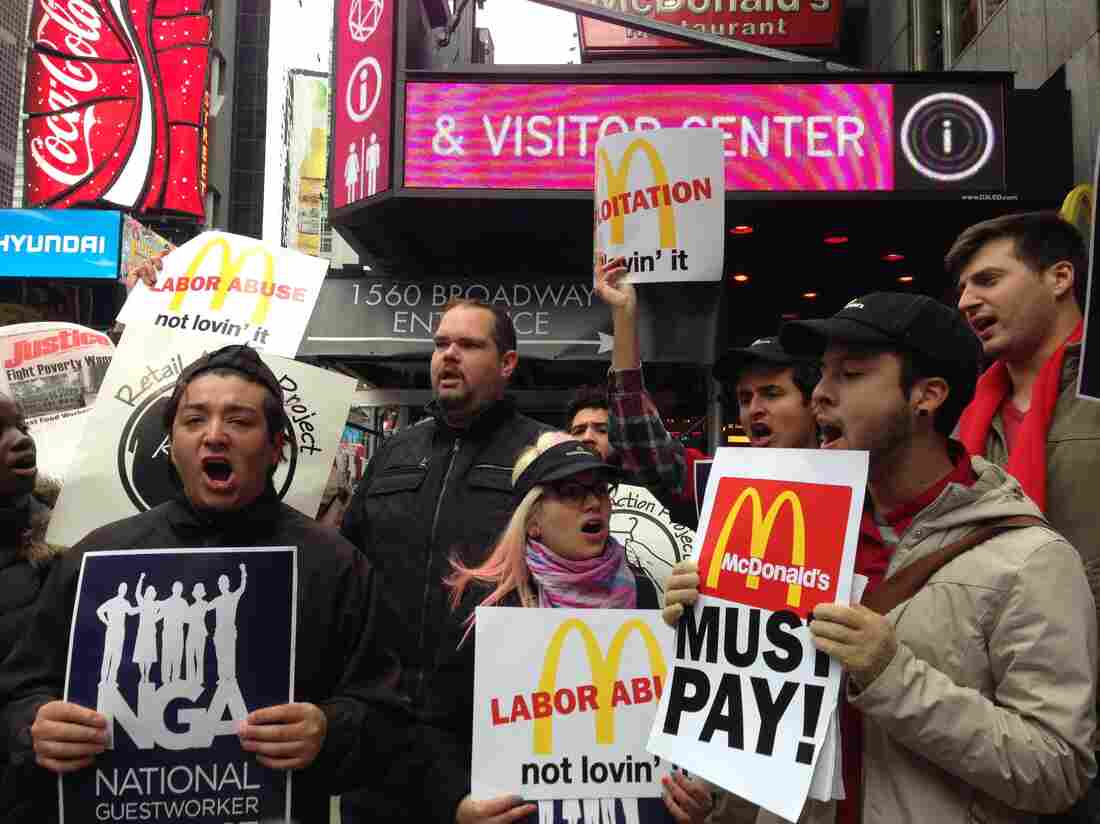 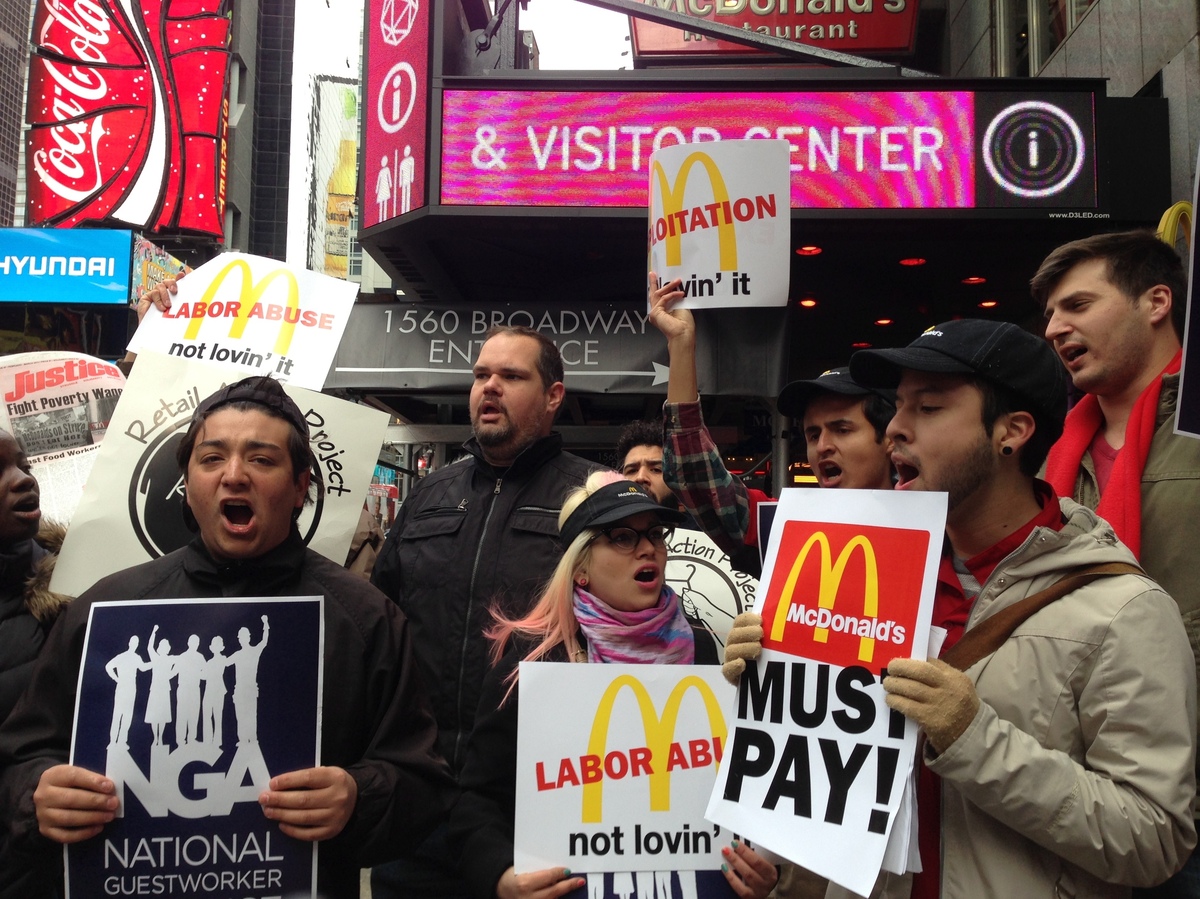 Workers and labor organizers in New York City protest the alleged exploitation of students on J-1 summer work travel visas who worked at a Pennsylvania McDonald's, on Thursday.

A group of foreign college students who came to the U.S. on cultural work exchange visas in December have been protesting their working conditions at a McDonald's in Harrisburg, Pa. In the process, they've wading into a debate about guest workers in the U.S.

The students include Jorge Rios, who says three months ago he eagerly did the legwork necessary to get a J-1 visa, used for student work exchange.

"I had to do a lot of paperwork back in my country to get the visa. I had to travel long distances because I don't live in the capital of Argentina, Buenos Aires, I live 14 hours away from there," he says.

Rios borrowed much of the $3,000 it cost. When he arrived in the U.S., the experience wasn't what he was told to expect.

He was escorted to a room in the basement of a house owned by family of the McDonald's franchise owner where he worked. He shared the tiny quarters with seven other students. Each of them got $300 deducted from their paychecks every month for rent — far above market rates.

"We didn't have any privacy. We slept in bunk beds that were meant for children because they moved and squeaked," he says.

Rios says the students were told they'd get 40 work hours per week. But they got only 25 and were told to remain on-call at all times. When they complained, Rios says, his employer threatened them with deportation and further reduced their work hours.

Earlier this month, after reading online about previous student-worker protests, Rios retaliated. The social communications major organized his 15 student co-workers and staged a strike. They have filed grievances with the U.S. Labor Department and State Department, and are requesting a meeting with McDonald's corporate management.

According to the State Department, the J-1 visa, or Summer Work Travel Program, started after World War II to promote cultural diplomacy. Following allegations of abuse in recent years, the State Department curtailed the number of students permitted to come to the U.S. to about 90,000 a year, from a peak of about 150,000 a year.

Robin Lerner, deputy assistant secretary in charge of exchange programs, says the instances of abuse are regrettable and rare.

"Most of the program is filled with wonderful placements," she says, "and the students say what a wonderful time they had and the time they spent here in the United States will forever change their lives."

Lerner says reports of abuse are taken seriously. Companies licensed to administer the programs are sometimes disqualified. The State Department conducts spot checks of programs — though it didn't visit the Harrisburg McDonald's. Now, the State Department says it is investigating Rios' claims.

McDonald's said in an emailed statement that it is also investigating the case. Kevin Morgan, chief executive of GeoVisions, the company that is the State Department-licensed intermediary with the students, said in an email, "we are collecting data, talking with people involved and investigating all aspects of this case."

"We don't want people to come here and have a negative experience, and then leave," Lerner says. "I mean, to me that is the polar opposite of the reason why we have this program."

The Debate Over Work Visas

But the McDonald's case taps into a broader ongoing debate about foreign temporary workers, over 1 million of whom come to the U.S. every year on various visas, including H-2A and H-2B visas. Agriculture and home health care businesses rely heavily on cheap imported labor. But businesses and unions are at odds over how many guest workers should be allowed, and how much to pay them.

Saket Soni is president of the National Guestworker Alliance, a union that helped Rios organize. He says both student and guest workers often fall victim to exploitation.

"It's a massive problem," he says.

Soni says many students — like Rios — go into debt to come here and then are coerced into hard labor or forced to live in destitute conditions.

"The problems with the J-1 visa are part of a bigger picture, which is that guest workers across the country are firstly exploited, and secondly used to undercut local workers and turn jobs into temporary and low-wage jobs," he says.

In 2011, Ionut Bilan, a 24-year-old student in Romania, helped organize J-1 visa student-workers at a Hershey's chocolate warehouse. He says his experience in the U.S. doing hard labor taught him some unexpected lessons.

"I wanted to stand up for myself, and I wanted to get this situation fixed," he says. Because the McDonald's student-workers were inspired by his protest, it was well worth the effort, he says.

Rios also says his stint has turned into a complex lesson about American society and politics.

"I think that our real cultural exchange started since we decided to get organized and expose this situation. Because we learned that, although we were going through that, most American people, they don't know this is going on," he says.

Rios says he plans to return to Argentina next week.