Accessibility links
Women In Combat, And The Price They Pay For years, the Army has effectively ignored the ban against women in combat, though it's still hard for them to receive full recognition for what they've achieved. "Battle-fatigued female soldiers" is a new and uneasy concept for American society. 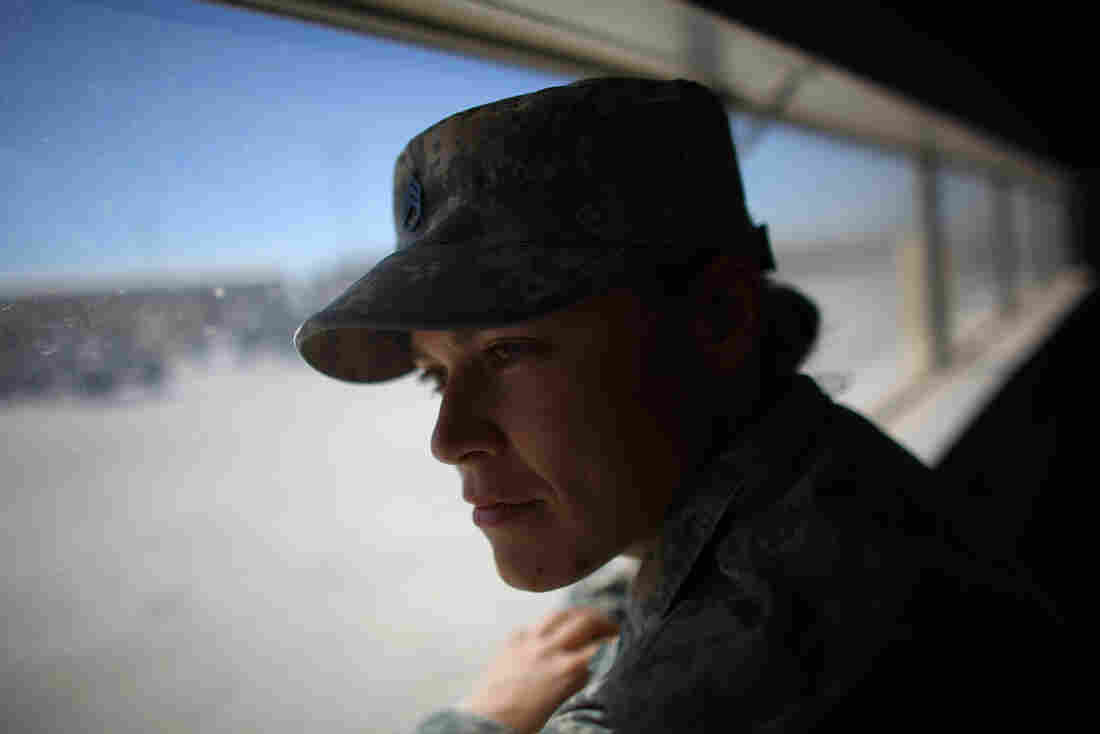 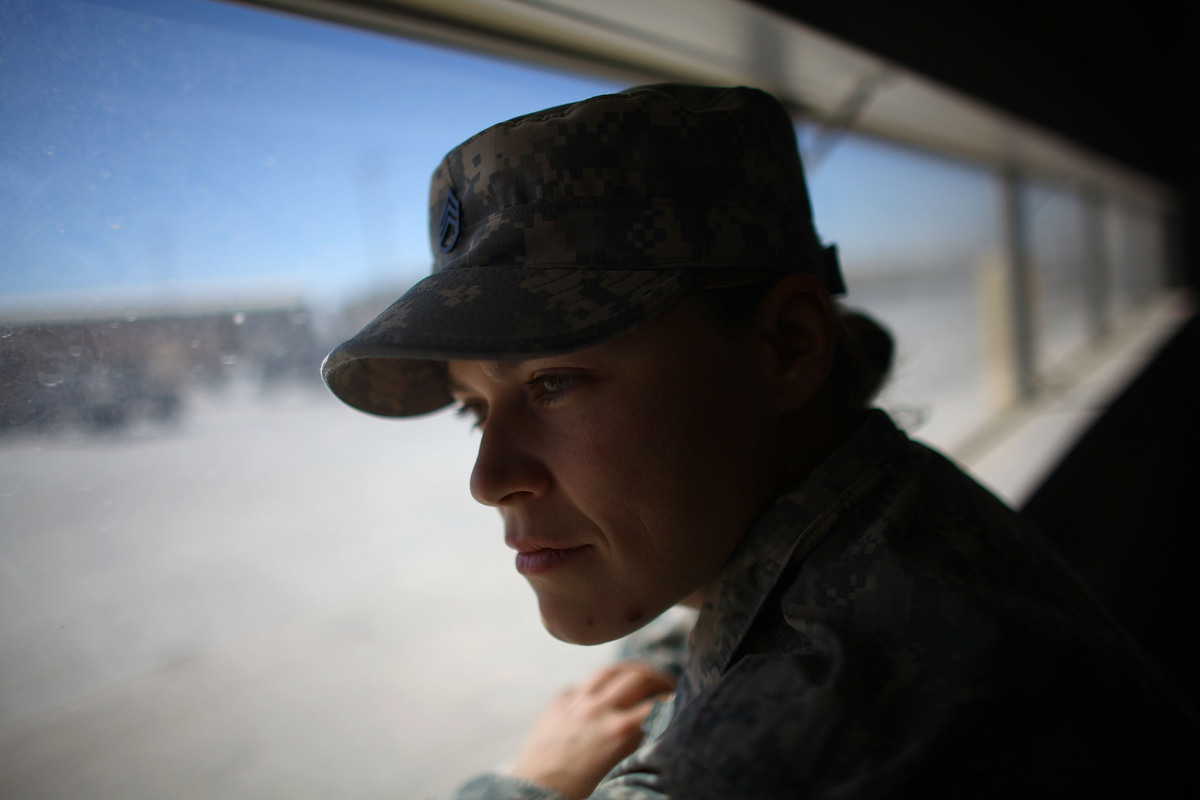 America has been debating the role of women in combat since 1779.

That's when the Continental Congress first awarded a military disability pension to Mary Corbin after she manned a cannon in the Revolutionary War at the battle of Fort Washington in New York. Corbin got only half the pension male soldiers received, but she asked for — and received — the full ration of rum.

Today, as the Pentagon decides how to remove the combat exclusion, women still have trouble getting fully recognized for what they've achieved at war.

Keown was a combat medic in Iraq and then pulled patrols with a female engagement team, or FET, in Logar, Afghanistan, last year. She accompanied Special Forces raids and infantry dismounts through dozens of firefights. 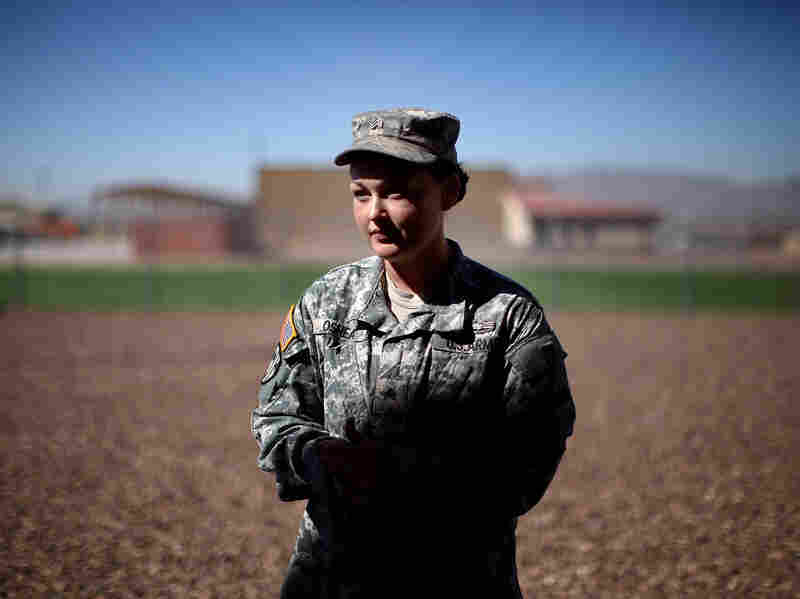 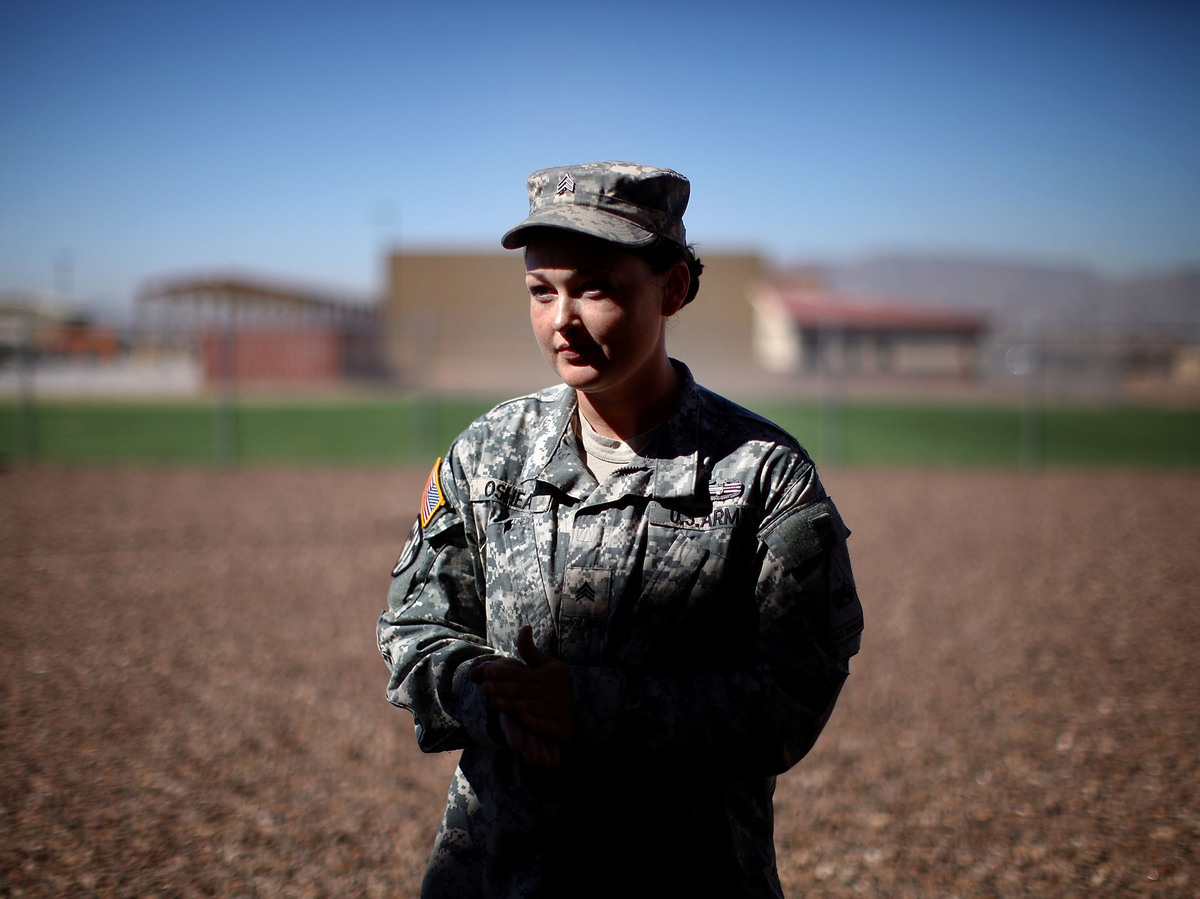 "It got to the point where you're doing a patrol and they start shooting at you — right next to your head, that whizzing sound," says Sgt. Jaclyn O'Shea, who served in the same unit. "And you're just like, you get used to it."

Back home, however, female soldiers don't always get acknowledged for what they've accomplished — especially because the official prohibition on women in combat is still on the books.

O'Shea says she's sometimes reluctant to wear her hard-earned Combat Action Badge because people will see that she's a woman and assume she got the badge by sleeping inside a fortified base while rockets flew overhead.

But the military seems to have come around to women's value. While the Pentagon is re-examining the combat exclusion rule, Army Special Operations Command has set up a permanent corps of female soldiers to go out on missions.

The military has found that women have the physical stamina and haven't disrupted cohesion in male units. Most importantly, they're mentally tough and don't break under fire. 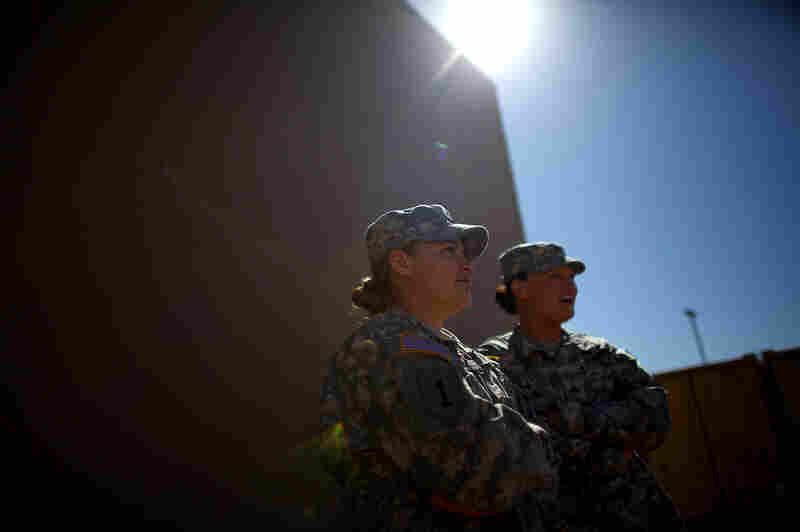 As part of a FET in Logar, Afghanistan, Keown, left, and O'Shea were involved in dozens of firefights. David Gilkey/NPR hide caption 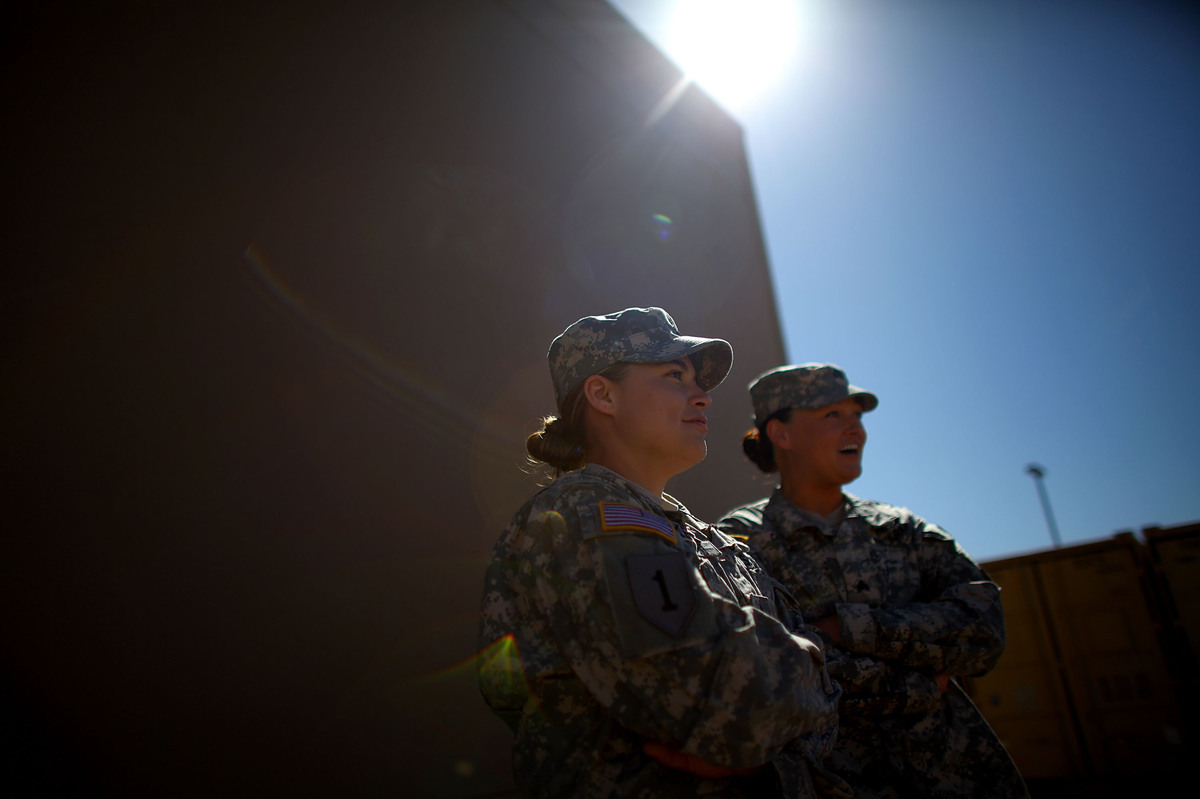 As part of a FET in Logar, Afghanistan, Keown, left, and O'Shea were involved in dozens of firefights.

"They fired upon us so we would return fire. The training kicked in and I think it registered that I'm actually shooting at a live breathing person and then it was instinct — that feeling, I go home and they die," says Sgt. Alyssa Corcoran, from the same FET team. "It was pretty much my life or my friend's life — or them."

Corcoran did come home, but she came home angry. She would blow up at her friends and family over nothing. And she couldn't really get her head out of combat mode.

"I had nightmares, I couldn't sleep. I was in high alert, ready to go," she says. "I'd wake up in the middle of the night and actually think that I was getting ready for a mission."

Post-traumatic stress disorder hits 20 to 30 percent of veterans who serve in Iraq and Afghanistan. It's still early to say whether it affects women differently than men. Corcoran's family pushed her to get professional help and says she's doing better.

But the whole idea of battle-fatigued female soldiers is new, and American society is not yet comfortable with the thought that women can be traumatized, gravely wounded, or lost.

Cedric Gordon, a deputy police chief in St. Petersburg, Fla., says it never really hit home that his daughter, Brittany, was at war until she sent him a Father's Day card that featured a photo of her in full battle gear, with a flak jacket and rifle. Brittany deployed to Kandahar last year as an Army intelligence analyst. She still kept in touch with her dad through letters and phone calls.

"She'd always call and ask me my opinion," he says. "I could always tell when she was serious, 'Dad do you have a minute?' "

I wonder sometimes if that's the depth of my grief, because I always felt like I should be there to protect her, you know, as a father.

Cedric Gordon, whose daughter was killed in Afghanistan where she was serving with the Army

Last year, on Saturday, Oct. 13, when Spc. Brittany Gordon missed a regular call, her father didn't think much of it. The phone lines sometimes went down.

She had recently told him that she was going on missions outside the base. She was on a mission that day to meet with Afghan intelligence north of Kandahar.

But one of the agents was wearing a suicide vest; his target appeared to be a senior Afghan official. A small piece of shrapnel hit Gordon just below the edge of her Kevlar helmet, killing her.

"Funny story is, she wasn't even supposed to be out on the mission. She had been out a lot," says Chief Warrant Officer 2 Gary McCabe, who was in Kandahar with Gordon.

Gordon had flourished on deployment, and McCabe says she was doing the work of a soldier several grades above her rank. She had a high emotional intelligence, one of her officers said. And she loved getting outside the wire to see Afghanistan.

"We were going to send somebody else; he had never been out before," McCabe says. "She would mentor him, teach him [to] deal with Afghan officials."

So in the end, she had gone on that patrol.

"I try to tell myself often Brittany is heaven, and heaven is such a nice place that even if she could come down here on Earth and spend time with her dad she wouldn't," Cedric Gordon said as he packed up his daughter's effects after a military funeral. "So that's how I give myself comfort."

Gordon has another daughter in the Air Force and a son in the Army. It's different with daughters, he says. He realized that when he went to Dover Air Force Base in Delaware to receive Brittany's coffin.

A bus carried him and another family out to the hangar, and Gordon says he forgot his own pain for a moment. The other family was a wife and young kids who'd lost their father, her husband. When they reached the hangar, the young widow was too distraught to get out of the bus. He realized that his anguish was different: He felt guilty.

"I wonder sometimes if that's the depth of my grief because I always felt like I should be there to protect her, you know, as a father," Gordon says.

Of course, Spc. Brittany Gordon, with her body armor and rifle, didn't need his protection. And he was proud that she pushed limits for what women are doing in the military.

Still, he feels like he should have been able to do something to save her.

"I think that's the way you feel about your daughters," Gordon says, "whether they're in the military or not."

The audio of this story, as did a previous Web version, incorrectly identifies the ranks of two service members. Jessica Keown is a staff sergeant, and Gary McCabe is a chief warrant officer 2.