Accessibility links
A Measured Look At Roth As The Writer Turns 80 The celebration of Philip Roth's career reaches its peak in a new documentary — Philip Roth Unmasked — that will screen on PBS next week as part of the American Masters series. There's no doubt that Roth is a master, and not just an American one, but the film tiptoes around the novelist's dark ferocity. 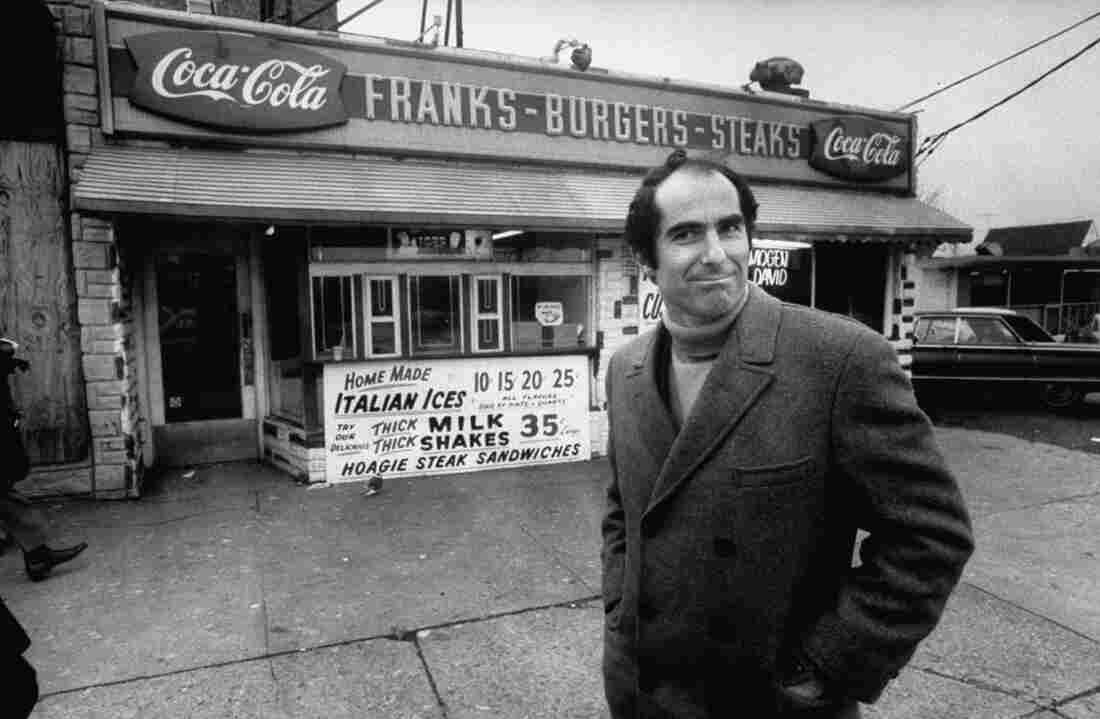 In Chinua Achebe's novel The Anthills of the Savannah, one of the characters says, "Poets don't give prescriptions. They give headaches."

The same is true of novelists, and none more so than Philip Roth. If any writer has ever enjoyed rattling people's skulls, it's this son of Newark, N.J., who's currently enjoying something of a victory lap in the media on the occasion of his 80th birthday. The celebration reaches its peak with a new documentary — Philip Roth Unmasked — that will screen on PBS next week as part of the American Masters series.

Now, there's no doubt that Roth is a master, and not just an American one. His first book, Goodbye, Columbus, won the National Book award in 1960, and he's been racking up prizes ever since. From the beginning, Roth was nobody's idea of the artist who sits invisibly behind his work paring his fingernails. The hilariously obscene Portnoy's Complaint made him into something of a pop icon, and his later creation of fictional alter egos has let readers spy on imaginary versions of everything from his fame and back pain to all of the hot sex he presumably was having.

In 'Philip Roth: Unmasked,' An Unadorned Portrait Of An Aging Master

What's A Judge To Do?: A Dissenter Protests Philip Roth's Latest Award

Philip Roth and His 'Everyman,' Revisited

Of course, it takes enormous confidence to say what other people aren't willing to. In Philip Roth Unmasked, he talks about his willingness to go for broke on the page. Roth speaks lucidly and well — he's really fun to listen to. And in this documentary he comes across as a smart, thoughtful, rather harmless man who loved his parents and devoted 60 years to his craft.

This isn't really surprising. After all, it's the nature of the American Masters series to be laudatory and upbeat about culture, to suggest that the person being celebrated has done work that is somehow noble and good for you.

Now, this might be a plausible approach to a literary politician like John Updike. But Roth is a guy who once wrote, "For a pure sense of being tumultuously alive, you can't beat the nasty side of existence" — and this idea reverberates through his work. Here's a writer who specializes in anger, sarcasm, iconoclasm, dirtiness, atheism, comedy and sexual attitudes that smack of misogyny.

While Philip Roth Unmasked doesn't completely ignore his dark ferocity, it tiptoes around it. We learn little about his personal life, which was messy enough to prompt his ex-wife, actress Claire Bloom, to spend 150 pages of a book excoriating his manipulative narcissism. Nor do we get much insight into what's obvious from Roth's work — his ambition, his princely sense of entitlement, his use of fury as fuel, his tendency toward political sanctimony, his way of seeing women as one big perk of fame.

Watching Philip Roth Unmasked, I couldn't help but compare it to his 1988 autobiography, The Facts, where Roth spends the first 157 pages presenting himself pretty much the way he does in the documentary: as a smart, hardworking, somewhat flawed Jewish guy from Newark.

But Roth is too honest to leave it at that. He'd no more let us believe that he's actually this boringly simple than he'd let himself believe in the balm of an afterlife. And so he ends The Facts with an imaginary letter in which one of his alter egos, Nathan Zuckerman, scrutinizes this autobiography and rips into all the ways that Roth has smoothed out the truth, creating an official version that sounds honest enough but actually leaves out the pulp of life in all its fury, mire and nastiness

In Roth's novella The Dying Animal, the narrator talks about learning to play classical music.

"Like all enjoyable things," he says, "it has unenjoyable parts to it." The same is surely true of learning to appreciate Philip Roth himself.