Accessibility links
Israelis, Palestinians Spar Over Controversial Settlement Palestinians object to all Israeli settlements in the West Bank. But one in particular, the E-1, is a major source of friction. Israelis say it's merely the expansion of an existing settlement. But critics say the Israelis are building a ring around Palestinian neighborhoods of east Jerusalem, cutting them off from the West Bank. 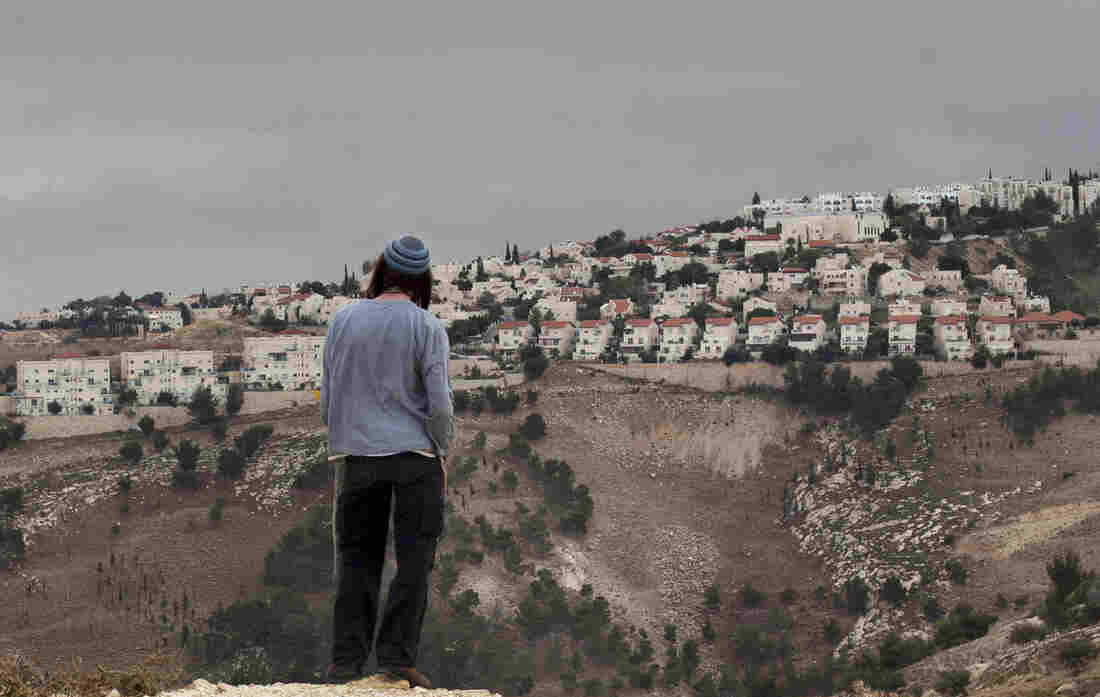 A Jewish settler looks at the West Bank settlement of Maaleh Adumim from the E-1 area on the eastern outskirts of Jerusalem on Dec. 5. The Israelis are planning a controversial housing project in E-1. Sebastian Scheiner/AP hide caption 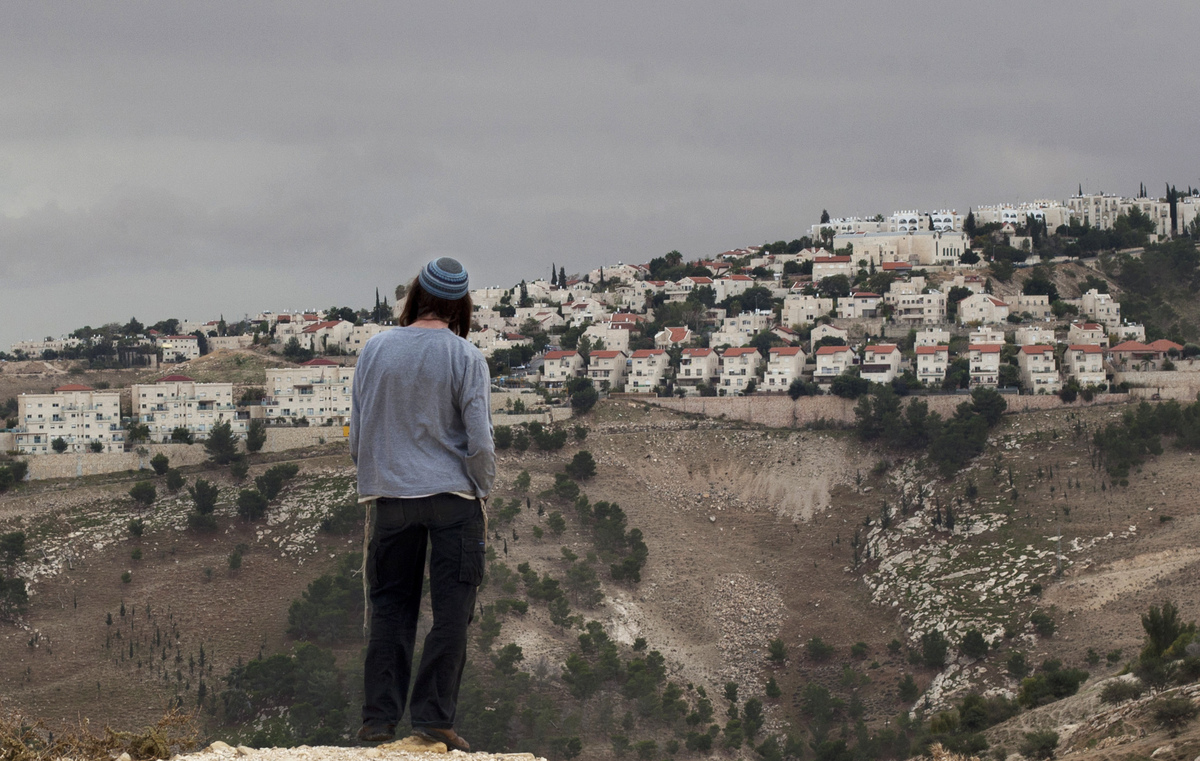 A Jewish settler looks at the West Bank settlement of Maaleh Adumim from the E-1 area on the eastern outskirts of Jerusalem on Dec. 5. The Israelis are planning a controversial housing project in E-1.

In practical terms, a project known as E-1 would provide 3,000 or so new housing units for Israelis in an area between east Jerusalem — which the Palestinians hope will someday be their capital — and the large Israeli settlement of Maaleh Adumim.

But numbers can be deceiving: Palestinians are renewing their objections to the growing number of Israeli settlements, and many fear E-1 could tip the balance in a way that makes an Israeli-Palestinian peace agreement impossible.

To understand why the Israeli government wants to build E-1, climb to the top of Mount Scopus. From there, former government spokesperson Miri Eisin says, it's obvious that Jerusalem doesn't have much room to grow. 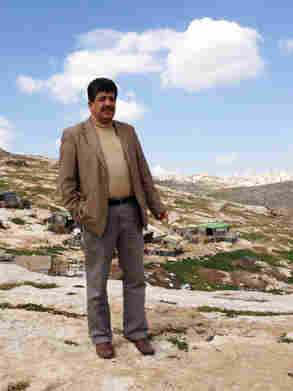 Palestinian Hadar Dibis is an activist from the Shuafat refugee camp, which would be surrounded if the Israelis build the E-1 settlement project. Larry Abramson/NPR hide caption

Israel found a way out of that pincer grip when it seized the whole of Jerusalem in the 1967 war. The country began building Jewish neighborhoods inside east Jerusalem, which at the time was almost entirely Arab.

And past the city limits, Israel built entire cities, islands of Israel surrounded by Palestinian communities in the West Bank.

One of the biggest of those island cities is Maaleh Adumim, a town of 40,000 people that lies several miles east of the Jerusalem city line. Maaleh Adumim has been there for decades. Now, Mayor Benny Kashriel says a new generation of residents has grown up and wants to find homes in the same settlement.

"We have a lot of children that have been born here, were raised here, were educated here," Kashriel says. "Now there are young couples that want to live in the place they have been born. And we have to give them this opportunity."

E-1 would provide more than 3,000 new housing units for that next generation. But it would do much more than that. The addition would end Maaleh Adumim's isolation by linking it directly to east Jerusalem.

That's why groups critical of Israeli settlement activity say E-1 is not just a housing project. They says it's part of an effort to build an Israeli ring around the Palestinian neighborhoods of east Jerusalem and cut them off from the West Bank.

Betty Herschman of the group Ir Amim gives tours of the city to illustrate how the government is using city planning for political ends.

Map of Greater Jerusalem and the E-1 Project

"The goal would appear to [be to] create a greater Jerusalem," she says. "The only way to do that is continue to expand the boundaries out."

That "greater Jerusalem," she fears, would end the Palestinian dream of having east Jerusalem as the capital of a future state. Adnan Husseini, the Palestinian-appointed governor of Jerusalem, says Israel wants to use E-1 to take Jerusalem off the table for future negotiations.

"This is No. 1, of course, is to have east Jerusalem," Husseini says. "And they [the Israelis] want it, also inside of east Jerusalem, to have minimum number of [Palestinians], so we are a minority ... and there is no issue."

The U.S. and the European Union have voiced similar concerns, fearing that E-1 could make a two-state solution impossible because it would cut off Jerusalem and nearly slice the West Bank in two.

The timing of the E-1 announcement made it clear that this is no ordinary settlement: Israel dusted off decades-old plans for E-1 last November, immediately after the Palestinians won their fight to be recognized as a state by the United Nations. Dore Gold, a former Israeli ambassador to the U.N., says E-1 was indeed a political response to that act.

The Palestine That Isn't In The Headlines

"Certainly if the Palestinians go forward with their unilateralism, if they take Israel to the International Criminal Court and a number of other measures, then Israel will have to protect its interests," Gold says. "And that's what the E-1 struggle is all about."

Israel has defended E-1 by saying it is just part of Maaleh Adumim, arguing that previous peace talks assumed that major settlements would remain part of Israel. In exchange, Palestinians would get land inside Israel.

Kashriel, Maaleh Adumim's mayor, says if you ask any Israeli, "everyone believes that Maaleh Adumim, finally, will be [a] legal part of Israel."

But land in and around Jerusalem is particularly sensitive.

The proposed site of E-1 is a desolate spot, with an impressive view of the Dead Sea and the Jordan Valley. In the other direction is the Shuafat refugee camp and Arab villages that would be surrounded by E-1. Hadar Dibis, an activist from the camp, says his people will never swap.

"Israel should be on its side, and the Palestinians should be on their side. And therefore, we reject the whole notion of transfer of land," Dibis says.