Accessibility links
A Turning Point For Talking About Suicide And Guns In Wyoming Wyoming has the highest suicide rate in the U.S., and two-thirds of the state's suicides are by firearm. Like much of the West, Wyoming's gun ownership rates are high, and gun culture is strong. The state's relationship with guns has made suicide prevention efforts tough, but that may be changing. 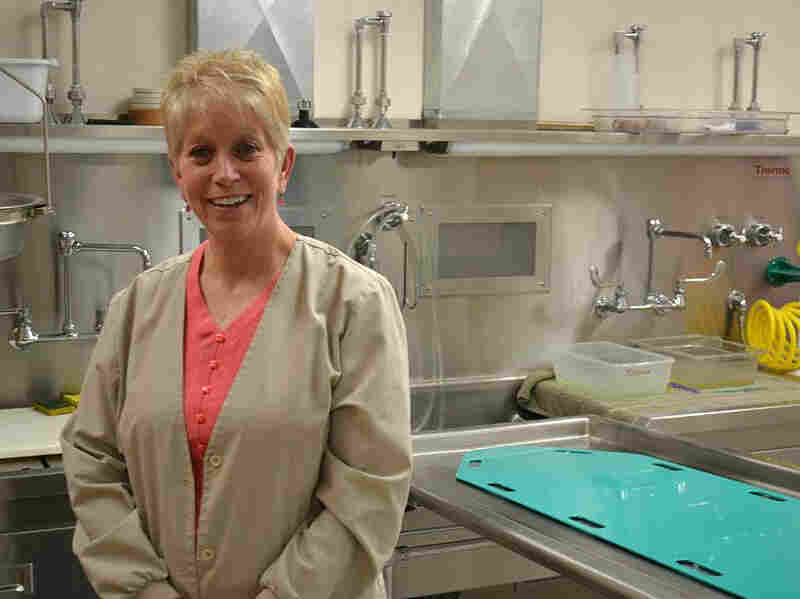 Connie Jacobson, coroner in Natrona County, Wyo., says suicide is one of the biggest public health problems facing the state. Wyoming has the highest suicide rate in the U.S., and two-thirds of suicides in the state are by firearm. Kirk Siegler/NPR hide caption 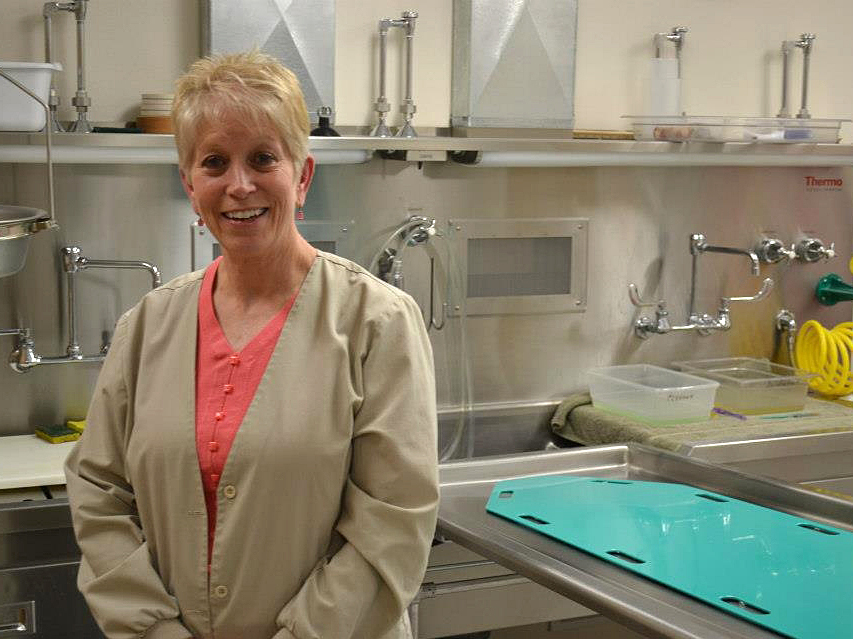 Connie Jacobson, coroner in Natrona County, Wyo., says suicide is one of the biggest public health problems facing the state. Wyoming has the highest suicide rate in the U.S., and two-thirds of suicides in the state are by firearm.

Guns are a big part of everyday life in Wyoming, and many residents have been directly impacted by a suicide in which a gun was used. The state has the highest suicide rate in the nation, and three-quarters of Wyoming's suicides are by firearm.

The rural state's relationship with guns has long made suicide prevention efforts challenging. But that may be starting to change.

Last year, there were more suicides in Natrona County than anywhere else in Wyoming.

The soft-spoken county coroner saw them all.

"My last suicide was a week ago, and yes, it was a male with a gunshot wound," Connie Jacobson says in her office on the outskirts of the small, wind-swept city of Casper. Beneath her is the morgue, where the bodies of suicide victims are brought.

Her latest case fits a pattern. In Wyoming, it's mostly men who kill themselves, and most use guns. Jacobson knows this grim reality both professionally and personally.

"Twenty years ago, my husband died by suicide, and also his brother died later that same year, by suicide," she says. Both were by firearm.

In her spare time, Jacobson volunteers for local suicide prevention efforts. She says suicide is one of the biggest public health problems facing Wyoming. For her, the key is keeping people away from any lethal means during a time of crisis.

"If a person is suicidal and is serious about it, they're going to find a method," she says.

But talking about the preferred method in Wyoming — guns — has never been easy here. Asked what her own relationship is with guns, Jacobson pauses.

"I guess I've never thought about that, nobody's ever asked me about that. I have a nice relationship with guns," she says. "I was a sport shooter for many, many years after my husband died. I hunt. I appreciate a firearm, so I have no problem with firearms."

If I go into any community in Wyoming and say, 'Suicide's a real problem, we'd like you to take away your guns, or we'd like to put these controls on them,' I'll be run out of town.

Keith Hotle of the Wyoming Department of Health

And that's Wyoming. The state's gun laws are among the most lax in the nation. It's not uncommon to see someone carrying a gun in a holster in a Wal-Mart or openly in the back of a pickup. And even if a town's too small for a gas station or bar, chances are there's still a gun dealer.

Keith Hotle, the suicide prevention team leader at the Wyoming Department of Health, says limiting the availability of guns would be the best way to lower the suicide rate.

"That's simply repeatedly proven by the evidence," he says. "If you've got access to guns, your rates are going to be higher, so Wyoming and our other states around us, and states like Alaska, perennially have the highest rates."

But coupling suicide prevention with a hot-button issue like gun control is a non-starter here.

"If I go into any community in Wyoming and say, 'Suicide's a real problem, we'd like you to take away your guns, or we'd like to put these controls on them,' I'll be run out of town," he says.

So instead Hotle says you have to separate the two — the protection of the Second Amendment in one corner and curbing suicide by stressing firearm safety in the other. That's at the heart of a report Hotle recently helped write at the request of Republican Gov. Matt Mead. It recommends public awareness campaigns that urge people to keep their guns locked in their homes and keep the keys away from vulnerable people during a crisis. The report also asks people who sell guns to get involved, calling on store owners to provide locks and raise red flags if a customer looks depressed.

Even at 2 o'clock on a weekday afternoon, the sales floor at Rocky Mountain Discount Sports in Casper is bustling. Young men in baseball caps and muddy Carhartt jeans pore over glass display cases full of ammo and handguns.

The store sells cable locks and trigger locks, and the store's owner, Shawn Wagner, says most guns already come with some sort of safety lock. He also tells his staff to give them away if a customer asks. Wagner considers himself the first line of defense.

"You can kind of read a person's state of mind, and we are giving them a deadly weapon if it's not treated correctly," he says.

Wagner started getting involved in suicide prevention in Casper a couple of years ago, after he intervened to stop his own brother from killing himself. But he doubts there's much of a connection between the state's gun culture and its high suicide rate. He thinks it's more to do with the cowboy culture.

"The Marlboro cowboy didn't go and get mental health appointments and talk it out with his shrink, and that's kind of the mentality of Wyoming," Wagner says. " 'Man up, you're a man."

Life in Wyoming can also be isolating. People live far from services, and frankly, it can be pretty lonely. There are fewer than 600,000 people in a state that covers more than 97,000 square miles.

"I hear people all the time say about some places in Wyoming [that] there's nothing to do there but get pregnant and get drunk," says 17-year-old Mady Schmidt of Casper.

Mady, a junior at Kelly Walsh High, looks like an ordinary teenager. Her hair is carefully done; she's wearing makeup and stylish clothes. But underneath, Mady battles deep bouts of depression and thoughts of suicide. Most of it she traces to losing her brother, Evan, who was just 11 when he shot himself with one of the family's guns in their home.

"I can't even explain how much that I would give back just to have my brother back," she says.

Her family got rid of all the guns in their house after Evan died. She shares her experience and talks openly about suicide and mental illness as she travels around the county talking to schools. She's not afraid to talk about the role of guns either, even though she's not sure the issue is black and white.

"I'm so in the middle because I see points on both sides," Mady says. "Of course, yeah, what if we just outlawed all guns? But then I think about well, things like meth are illegal."

It's hard to find someone in Wyoming without some connection to suicide that involved a firearm. Just a few years ago, that connection was rarely talked about publicly. State suicide prevention officials here say, this openness, if nothing else, signals some progress.

A previous Web version of this story incorrectly stated that the rate of Wyoming's suicides by firearm was two-thirds. That is the national statistic. In Wyoming, it is three-quarters.