Accessibility links
'Severing Love From Diapers': The Other Case Against Gay Marriage Detractors say extending recognition to same-sex couples will weaken a bedrock institution meant to protect women and children. The Supreme Court is set to hear arguments regarding gay marriage next week. 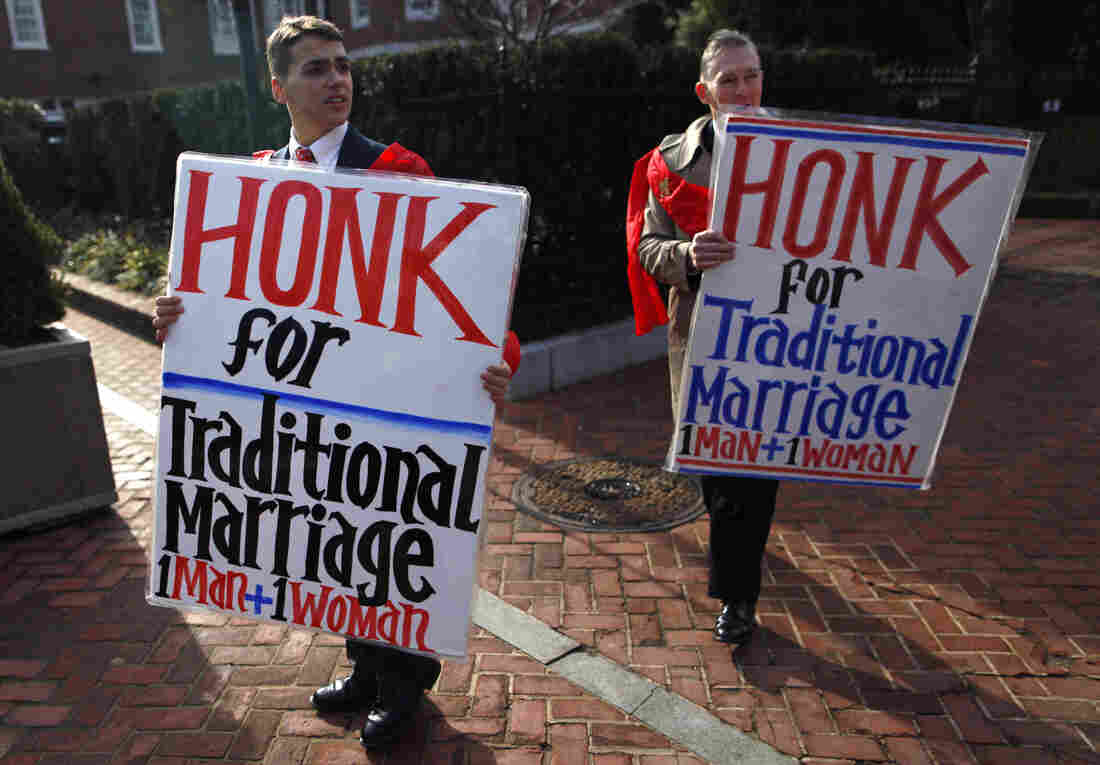 Zachariah Long (left) and Edward Ritchie protested last year against a gay marriage bill in Maryland. In 1973, Maryland became the first state to define marriage as a union of one man and one woman. Voters there legalized gay marriage in 2012. Patrick Semansky/AP hide caption 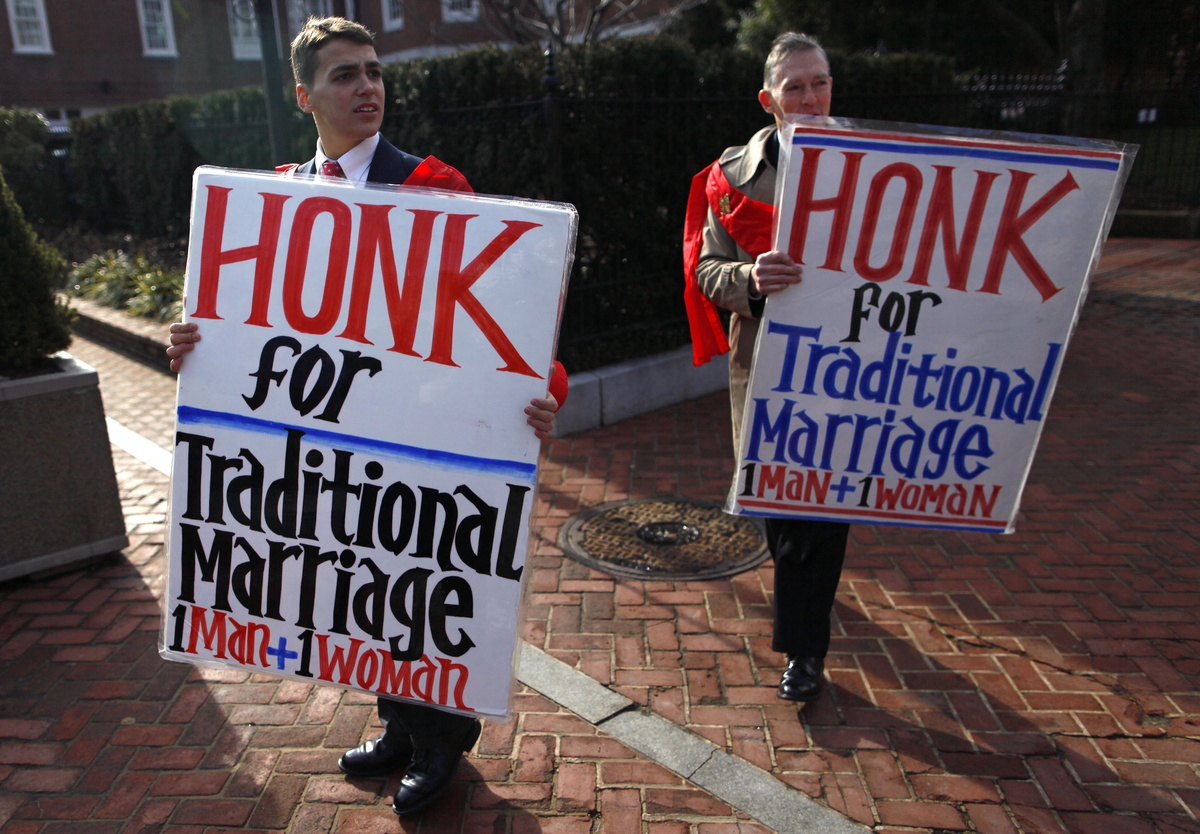 Zachariah Long (left) and Edward Ritchie protested last year against a gay marriage bill in Maryland. In 1973, Maryland became the first state to define marriage as a union of one man and one woman. Voters there legalized gay marriage in 2012.

When the Supreme Court hears oral arguments about same-sex marriage next week, much of the debate will turn on legal questions surrounding issues such as federalism and due process.

But the underlying questions are more emotional, with moral objections frequently raised by members of the faith community.

"I believe marriage will be between a man and a woman," says Ruben Diaz, a minister in the Church of God and a Democratic state senator from New York who plans to demonstrate outside the court next week. "It's as simple as that."

But there are secular arguments against gay marriage, as well. Its opponents believe that redefining marriage to allow two men or two women to wed each other will weaken an institution set up across centuries and societies to protect women when they are pregnant and ensure that children's fathers take responsibility for them.

"If the law redefines marriage to say that fathers are optional, then it's hard to make the argument that fathers are essential," says Ryan T. Anderson, a fellow at the conservative Heritage Foundation.

Anderson was an undergraduate at Princeton University in 2004 when the Massachusetts Supreme Judicial Court put the issue on the national agenda by granting same-sex couples in the commonwealth the right to wed.

Opinion at the university's dining halls ran heavily in favor of the decision. "Everyone at Princeton was in favor of it," Anderson recalls.

But he was left feeling uneasy. His efforts to explore the issue led him to the offices of law professor Robert George, who arguably sits at the epicenter of the intellectual opposition to gay marriage, as well as abortion.

Together, Anderson, George and another Princeton alum named Sherif Girgis wrote an article — later expanded into a 2012 book called What Is Marriage? Man and Woman: A Defense — that Slate called "the best argument against gay marriage."

The whole reason the government is involved in the marriage business, Anderson says, is that when a man and a woman lie down together in love, a new life can result.

"The state's not interested in my love life as such, or my romantic feelings," he says. "We don't need the state regulating that."

But the state does have an interest in seeing that relationships that result in children are permanent and monogamous, to ensure their care and feeding, he says. Otherwise, the state might have to help with their support.

"Marriage is the way the state non-coercively incentivizes me to be in the institution that does best for children," Anderson says.

Allowing gay couples to marry, he says, weakens the power of marriage as a coercive force for procreating couples. And gays can secure the rights they need, such as hospital visitations and inheritance issues, through other changes in the law, Anderson says.

"Marriage doesn't have to do all of the work we need to do to do good public policy," he adds.

Caitlin Seery shares Anderson's concern that weakening the "marriage culture" could lead to more government intervention and expenditure of resources to aid children who would have been better off raised by a mother and a father.

"The most compelling arguments I've heard are for traditional marriage — the other side makes emotional arguments," says Seery,director of programs at the Love and Fidelity Network, a Princeton-based group that prepares students to talk about marriage and other issues on college campuses. 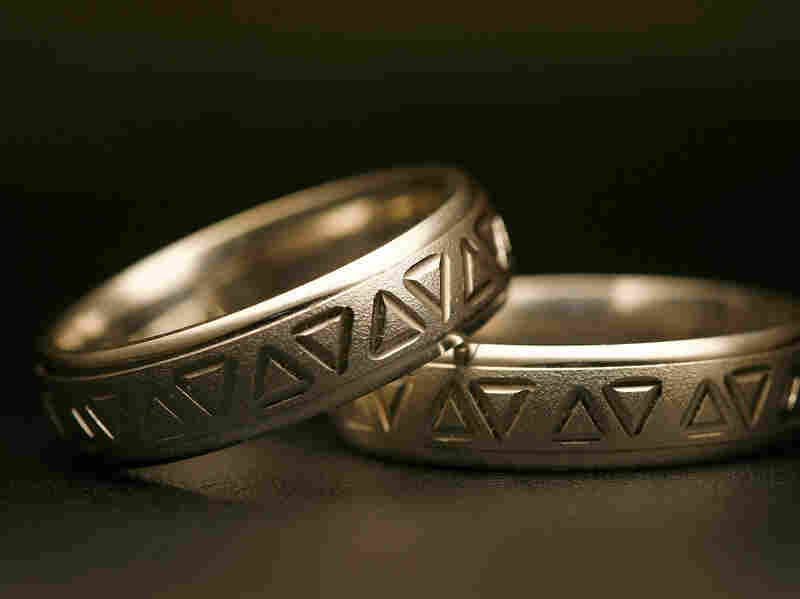 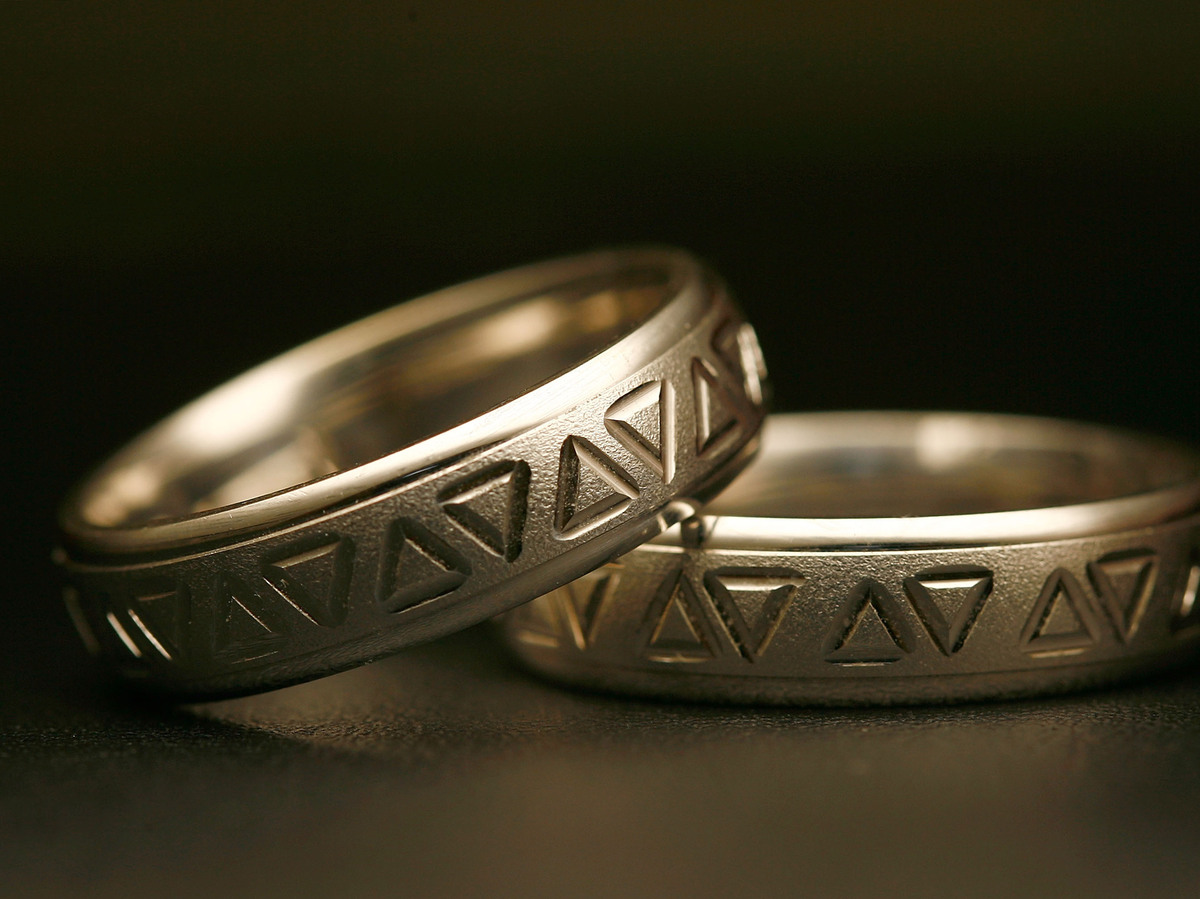 Same-sex wedding rings are engraved with triangles, a symbol of gay pride. Detractors say extending recognition to same-sex couples will weaken a bedrock institution meant to protect women and children.

She also agrees that marriage is misunderstood as a celebration of romantic love.

"Most of us grew up thinking marriage is about romantic love and living happily ever after, whereas when we grow up, we realize it's about raising children and providing them with a mother and a father," Seery says.

Marriage is primarily a "device" meant to solidify relationships that can result in children, says Sam Schulman, a journalist who has written a number of articles on the subject over the past decade.

When a man cheats on his spouse, it's an affront not only to her, but to the entire social order, Schulman says. "Basically, what I'm talking about is that impulse of shame in a man that's meant to come when a woman who is his mate becomes pregnant and they are not married," he says.

Schulman recognizes that gay couples can adopt — something he supports — and that part of their argument in favor of marriage rights is specifically to strengthen families that already exist.

Still, he says that because marriage is an essential part of the broader kinship system that protects women and children, redefining it so thoroughly could weaken it in ways as yet unforeseen.

Granting marriage rights to gay couples "dilutes the currency that makes a woman married to a man a wife," Schulman says.

Breaking Not Bending The Rules

Procreation is necessary for the species, and marriage is the best way to ensure thriving families, says John C. Eastman, a Chapman University law professor and chairman of the National Organization for Marriage.

Allowing gays to marry, he says, would be "almost the nail in the coffin" in terms of a trend toward the "delegitimizing of marriage," through no-fault divorce, out-of-wedlock births and other phenomena he says weaken marriage.

"This would dramatically transform the way we think about marriage," Eastman says. "It would forever sever the connection of marriage to procreation — forever sever love from diapers."

Redefining marriage because gays want to marry would accelerate the prevalent "cavalier attitude" about the institution, he says, and further the sense that it's only meant to serve adult interests.

"We think there's a reason why in every society — across cultures, across history, across time — that there's a reason societies benefit from that unique relationship that's uniquely capable of producing children," Eastman says.

Schulman, the journalist, says it's patently obvious that not all heterosexual unions are happy.

He also recognizes that some straight couples who had been blase about marriage as an institution have seen their interest revivified by the struggle of gay couples to enter into the bonds of matrimony.

Still, Schulman says the tradition matters. All societies have rules that define marriage, typically barring practices such as incest and polygamy. People who do transgressive things want recognition, too, he says.

"This idea that gays should be able to marry because gays want to marry — it would be very hard to say that guys who want to date their mom or brothers or sisters, to say you can't do it," Schulman says.

Although there were broken homes long before the political and legal debates about gay marriage began, marriage as a socially sanctioned institution is meant to ensure children are raised by a mom and a dad, he says. Gay marriage lacks that "unique" quality that is beneficial to society.

"From a historical perspective, there are lots of societies in the world experienced with gay relationships," Limmer says, "and for some reason those societies aren't around."