Accessibility links
Movie Review - 'Olympus Has Fallen' - Retro Cold War Fears Roar In Flashy Flop There was a time when foreign invasion was a huge American concern. Now is not that time — but you could have fooled the makers of the crass, jingoistic Olympus Has Fallen, a sharp retreat to an era of military-fueled paranoia. 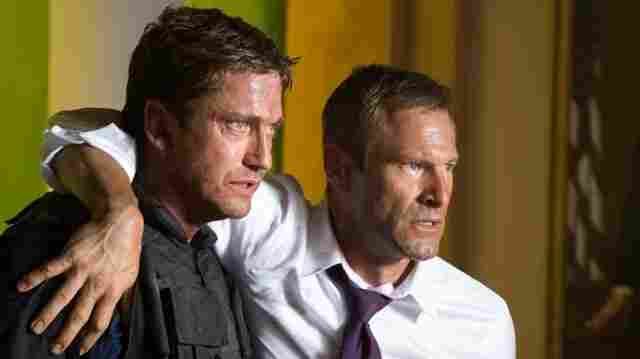 Rated R for strong violence and language throughout

It's probably best not to think of Olympus Has Fallen as a movie released in 2013. Antoine Fuqua's film — about a band of North Koreans who invade the White House — feels from start to finish like a throwback to the action cinema and military thrillers of decades past.

It's like an ersatz reproduction of an archaeological relic, if the archaeologists in question had just thrown together a bunch of random artifacts from different eras, taken a blurry photograph and then asked someone to make an accurate model based only on their memory of that photograph.

The obvious reference point here is Die Hard, with Gerard Butler stepping awkwardly into Bruce Willis' shoes as Mike Banning, the man trying to single-handedly thwart a hostage situation from the inside. He's a disgraced Secret Service agent, formerly part of the president's detail, now languishing in the apparent purgatory of the Treasury Department. But when a massive coordinated attack on the White House from the air and the ground leaves the president (Aaron Eckhart) held hostage in the basement of the building, with most of his protection lying dead in the smoking ruins above, Banning is the country's last hope.

At times the debt the film owes to Die Hard is so huge that it goes uncomfortably beyond homage and into wholesale theft. Try not to see Robert Forster's Joint Chiefs chairman as this film's Police Chief Dwayne Robinson, or the attempted Black Hawk attack on the White House as a direct quotation of the failed SWAT team assault in that movie.

Banning's conversation with a villain disguising himself as a good guy in the house may as well have just inserted the analogous scene between Willis and Alan Rickman in the earlier film.

But that's hardly the only source material. The jingoistic fear-mongering, the maudlin nationalistic paeans to God and country? Straight out of Red Dawn. There's a shout-out to 1950s B-movies, with an Earth vs. the Flying Saucers-style attack on downtown D.C. and the resultant shortening of the Washington Monument.

The nuclear-scare subplot comes complete with a White House doomsday device so ill-advised and poorly thought out that it seems designed specifically for an enemy to use against the U.S. It owes its debt to Dr. Strangelove, but absent that film's satirical edge, it just seems nonsensical.

That lack of any kind of self-aware winking is where the film fails. Its more ridiculous notions — only two fighters are scrambled to divert an unregistered military transport heading straight for D.C., for instance, and only threaten to shoot it down when it's 30 seconds away from the National Mall — might have been more excusable if there was any sense that Fuqua meant any of this in jest. 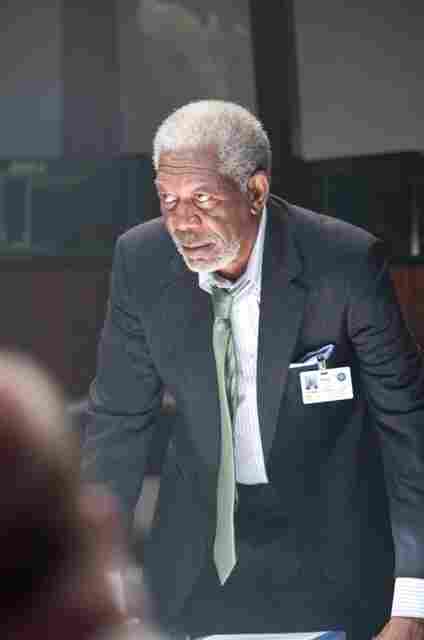 It has to be a joke, right? The budget for the film was $130 million, yet the CGI of D.C. being attacked looks little better than a CNN infographic, and the sets look obviously constructed of hastily assembled drywall. If you spend that much money making something look like a cheap B-movie, then there must be some self-aware parody going on. Yet everything is played with the straightest of faces.

Sure, I'll admit to gripping my armrest tight during a few sequences. The self-important humorlessness of the film, which seems to beg the viewer to take the adventure seriously despite never earning it, does play well in the action sequences. The producers wisely don't attempt to go for a PG-13 rating, and the killing is as violent and unflinching as it would have to be for an attack like this to succeed. There's a real sense that anyone here could die, and that at least gives the film enough stakes to engage on a gut level.

But it also creates some unpleasantly uncomfortable moments, namely in a scene that plays the torture of captured enemies for both cheers and laughs, both of which it rather nauseatingly received from the audience I watched with.

But that's judging the film by 2013 standards, in a time when we think about what a movie's gleeful attitudes toward torture, or its simplification or demonization of our enemies, might say about us. Olympus Has Fallen belongs to a cinematic era when enemy stereotypes that tap into our deep anxieties about an unstable world are merely a shortcut to getting audiences to cheer at the raising of an American flag in the twinkling light of a new dawn. So Mission Accomplished ... I guess.