Accessibility links
Movie Review - 'Spring Breakers' - Avant-Garde Teen Adventure Is Surprisingly Square Harmony Korine's splashy crime comedy Spring Breakers has made headlines for its surprising, sexualized use of Disney-certified starlets. It packs a few surprises, but the violent, bloody film ultimately tries a little too hard to be truly avant-garde.

'Spring Breakers': A Square Trip To The Seamy Side

'Spring Breakers': A Square Trip To The Seamy Side 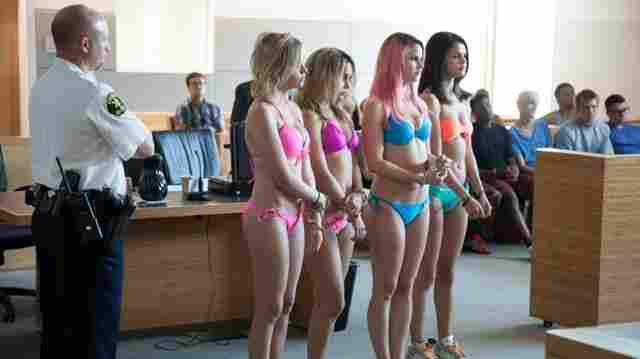 In the '70s and even into the '80s, exploitation movies used to come to us naked and innocent, rarely pretending to be anything more than what they were. Now, pictures intent on delivering cheap thrills tend to arrive dressed in art-house costumes, much like the ones Harmony Korine's killer college girls wear in his arch little sociological study, Spring Breakers.

On the night they commit their deadliest deeds, these girls-gone-wild slip pastel ski masks over their beachy-blond heads. Only the girls' eyes and their Crest Strip-white teeth show through the little holes: They look like pink ninja chipmunks.

Spring Breakers is half action comedy, half moral meditation on the sorry state of youth today, which is maybe what you'd expect from writer-director Korine, the guy who first sounded the youth-in-danger alarm nearly 20 years ago with his screenplay for Kids.

Although parts of Spring Breakers are very funny, there's also something tsk-tsking and superior about it, as if Korine had thought a lot about young middle America's idea of midsemester fun and decided he doesn't like it one tiny bit.

But that doesn't mean he eschews the scenery. As Spring Breakers opens, four young women, bored to tears while stuck at some dreadfully landlocked college, yearn to cut loose and run semi-naked and free on the Florida coast.

Problem is, Candy (Vanessa Hudgens), Brit (Ashley Benson) and Cotty (Rachel Korine, the director's wife) don't have enough money to make the trip. Even though they've taken a fourth (rather innocent) little chick under their wings — Selena Gomez's aptly named Faith — they just can't scrape together the necessary dough.

So the three of them, unbeknownst to Faith, hold up a local restaurant — with fake guns, though they also employ some noisy hammers as a scare tactic — and thanks to the wonders of quick, time-defying cutting, it's barely a matter of minutes before they're prancing around in the Florida sun, wearing nothing but bikinis and sneakers.

Compared with some of the other nubile young hotties who drift past Korine's lens — he favors color-drenched pans and just-out-of-film-school slow-motion effects — these four seem relatively innocent. (Others are doffing their bikini tops, joyfully; just about everyone, male and female, is clearly overdoing it on the beer.)

After a few days, though, our four comely cuties go off with some local bad guys, snort some cocaine, and run afoul of the law, landing themselves in jail. A local operator known as Alien (played by James Franco, with cornrows and a glittery platinum grill) bails them out and makes off with them, ostensibly just waiting for the moment when he can do really bad things with — or to — them. 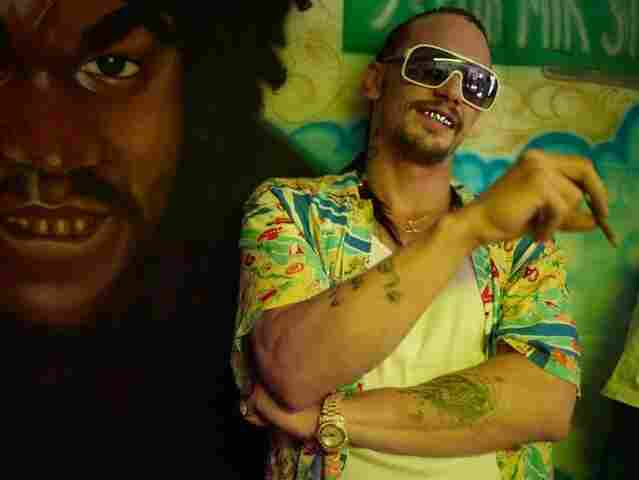 Wanna-be gangsta rapper and drug lord Alien (James Franco) takes the vacationing college students under his wing after they get arrested during their spring break. A24 hide caption 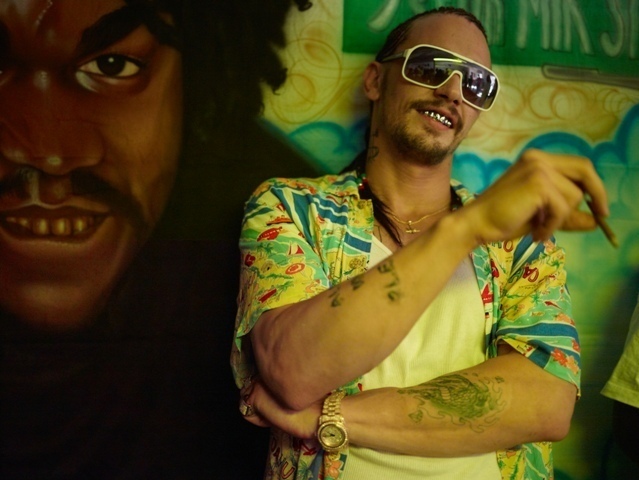 Wanna-be gangsta rapper and drug lord Alien (James Franco) takes the vacationing college students under his wing after they get arrested during their spring break.

Yet that's not exactly how Spring Breakers unfolds, and however exasperating Korine may be as a filmmaker, he still pulls off some surprises. The picture is filled with phony experimentalism — it's not nearly as daring or as compelling as Korine thinks it is. Bits of the story are told out of sequence; now and then one girl or another will recite, in moony voice-over, a letter home, vaguely referencing the "good time" she's having, or expressing eagerness, real or feigned, to get back and settle down to what really matters.

It's hard to know exactly what's happening when, which is part of the plan. Korine is making a statement here. At one point, Alien — who makes a handsome living as a drug and arms dealer and runs Scarface on a loop as a constant source of inspiration — sits down at the keys of a white outdoor piano, tinkling along sensitively to the strains of Britney Spears' "Everytime" as the girls twirl about, like music-box ballerinas, in those aforementioned pink balaclavas. The moment is so avant-garde it's square.

That sums up the whole movie, come to think of it. Korine is tap-dancing so fast that it's never really clear exactly what he's up to, but none of it adds up to much in the end.

Franco turns his performance into one massive look-at-me stunt, and admittedly, it's hard to take your eyes off him: Those shiny metallic teeth are mesmerizing — they're reminiscent of an older, cozier symbol of American success, the grill of a Cadillac. Alien likes his money, and he loves what it can buy. (He delivers a hilarious monologue detailing his favorite things, which decidedly do not include raindrops on roses and whiskers on kittens.)

Franco is amusing until his shtick wears thin. And the spring breakers themselves — even the effervescent charmer Hudgens — are basically interchangeable, right up through the movie's final, tastefully violent spree.

Only Gomez, as the churchgoing sweetheart Faith, distinguishes herself. The actress plays a character, not just a state of being — she manages to put some thought and discernment behind Faith's innocence. It's little wonder Faith is Alien's favorite. She's the one character in the movie that not even Korine, the mastermind behind this feverish shockeroo exercise, can fully control.