Accessibility links
As Gay Marriage Heads To Court, A Look Back At The Bumpy Ride The Supreme Court hears two gay marriage cases next week. These will be the next major steps on a path the country has traveled for decades. Those who have been affected by the gay marriage battle reflect on the changes so far. 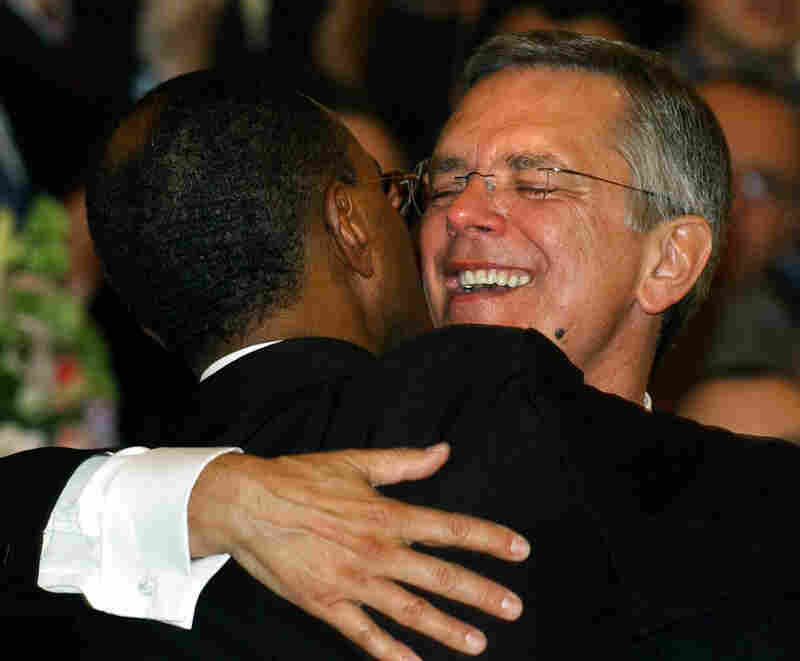 David Wilson (left) and Rob Compton embrace after being married by a Unitarian minister at the Arlington Street Church in Boston on May 17, 2004. They were one of the first couples in Massachusetts to be legally wed. Stan Honda/AFP/Getty Images hide caption 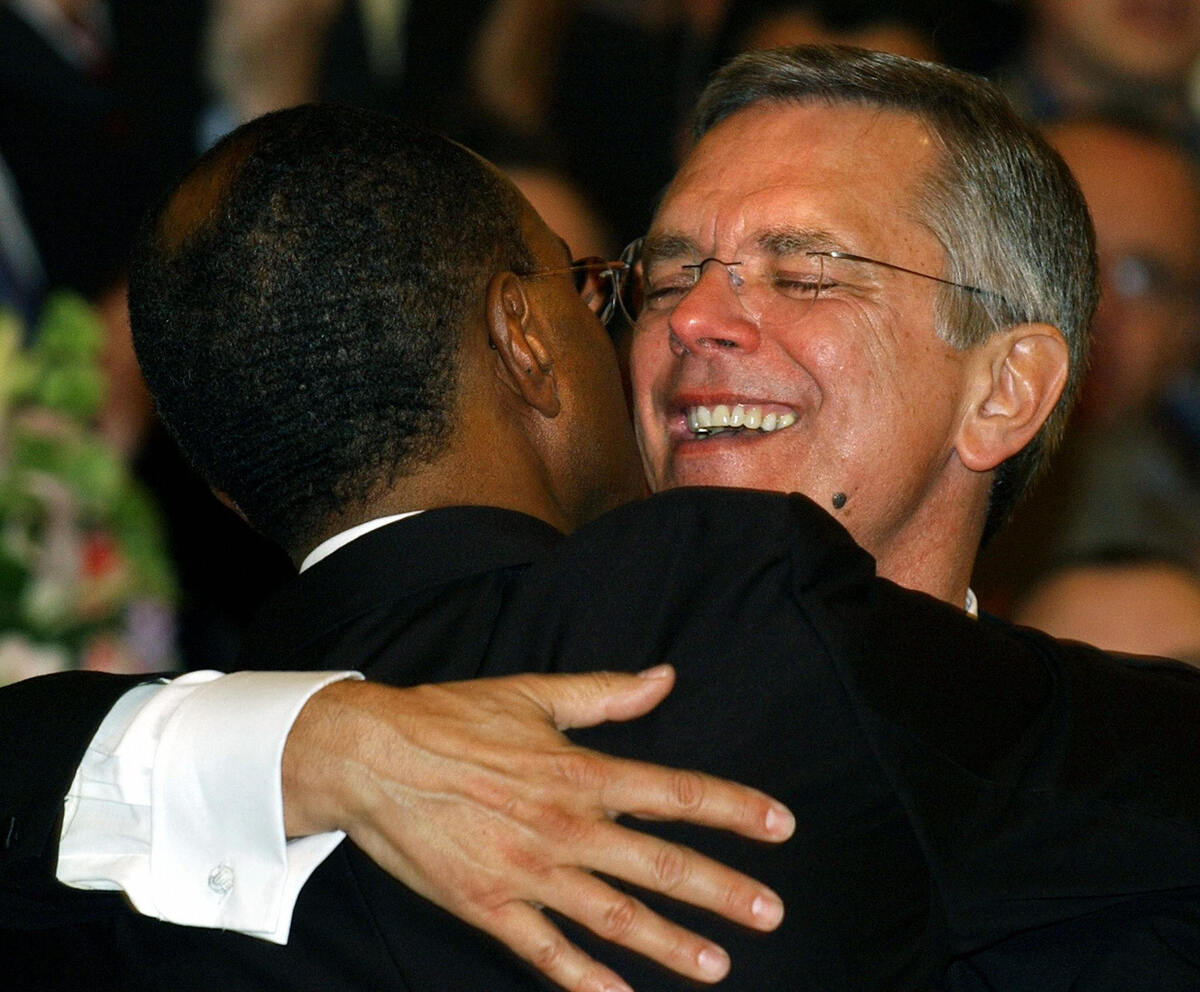 David Wilson (left) and Rob Compton embrace after being married by a Unitarian minister at the Arlington Street Church in Boston on May 17, 2004. They were one of the first couples in Massachusetts to be legally wed.

Gays and lesbians have adopted the phrase "it gets better" as a kind of slogan to assure young people that life won't always be so tough.

Looking back, life has gotten dramatically better for LGBT people in the United States in a very short period of time. The modern gay rights movement began less than 50 years ago. Today, supporters of same-sex marriage outnumber opponents.

Now, the Supreme Court is about to hear two big cases that could shift the landscape for gay rights again.

Gay rights groups are more wound up than they have been in years. Based on next week's arguments, the Supreme Court may dramatically change their fortunes for better, or for worse.

The same feeling was in the air after police arrested two men in Atlanta in 1982. Those men were charged with sodomy — consensual sex in one man's home. The case, called Bowers v. Hardwick, went to the Supreme Court.

As Georgia's attorney general at the time, Mike Bowers prosecuted the men.

"For me, it was just part of doing a job," he says now. "I had a specific duty to carry out, and I tried to carry it out."

Bowers won on a 5-4 vote. Sodomy laws stayed in place until the justices overturned that ruling some 15 years later.

Today Bowers says he always believed that sodomy laws would be the first domino to fall in a chain leading to marriage.

"I predicted to a magazine writer that this was coming," Bowers recalls. "And he called me one of the craziest people he'd ever talked to. Once you do away with the sodomy laws, it's just a short step to debating same-sex marriages, and I thought it was sure to come."

His legal team also argued that repealing sodomy laws would lead to polygamy, incest, prostitution and more. Those are not on the horizon, even as same-sex marriage is. 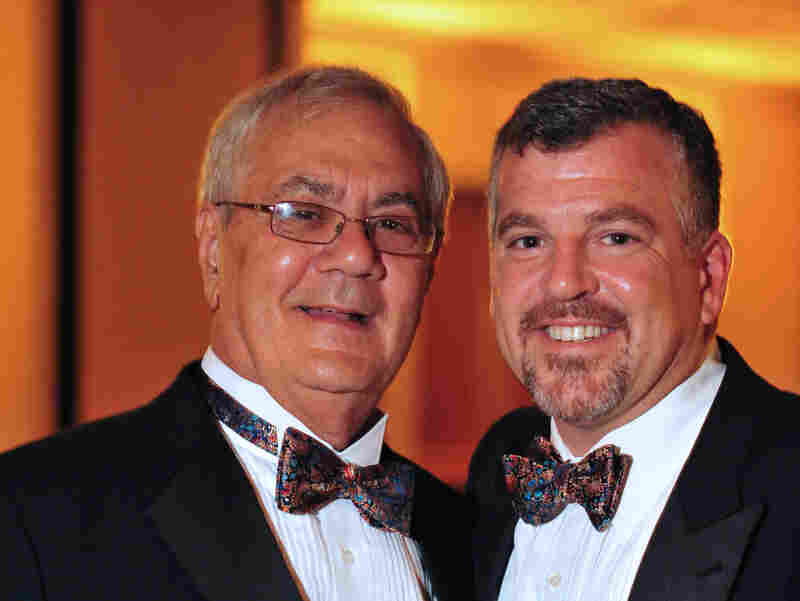 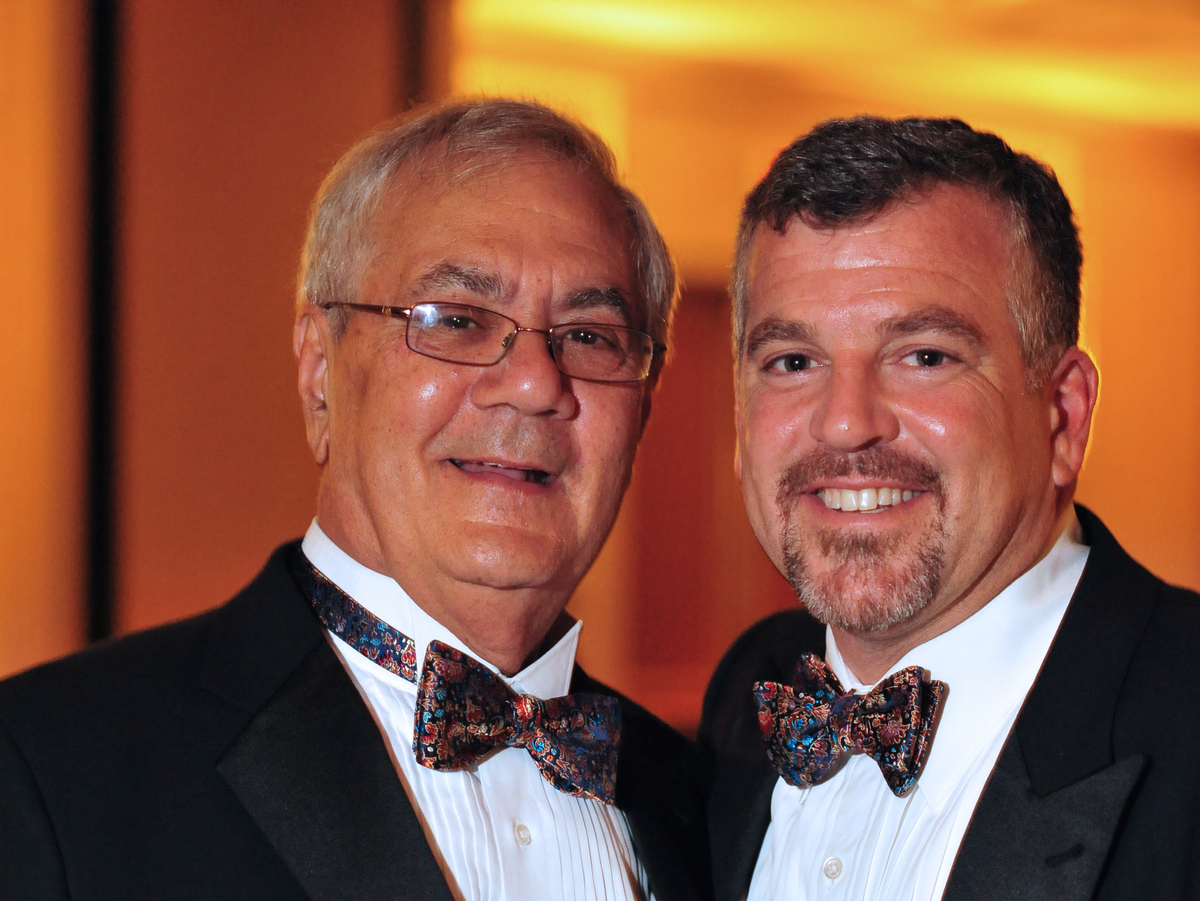 It took a long time to reach this place. And the path included a lot of suffering for a lot of people.

When former Massachusetts Rep. Barney Frank was a kid in the 1950s, gay marriage was inconceivable. He barely thought he could work in government as an openly gay person.

"It never struck me as remotely possible that I could have an elected career and even an appointed career," he says. "I assumed I would have to be very closeted to get that."

The Democrat finally came out publicly in 1987. Republican Sen. Alan Simpson of Wyoming called him right away. "And he said, 'Barney, I just want to apologize. I probably, knowing me ... told some anti-gay jokes in your presence, and I'll never do that again. ... I feel terrible.' It was very decent of him," Frank says.

Millions of people around the country had similar experiences as they got to know gay people personally. Even fictional TV characters have made a difference.

In the early 1990s, the media seldom told gay stories unless the subject was people dying of AIDS. Then a show called My So-Called Life started in 1994.

"I didn't see any images of myself on TV, and ... to have, you know, a character who was both Latino and gay ... said to me that I am a part of the fabric of American society," Cruz says.

When Cruz started filming the show, he wasn't speaking to his father.

"When I came out to him on Christmas Eve, he threw me out and I lived on the street," Cruz says.

That story became a plot line on the show.

A lot has changed in the decades since the Supreme Court dismissed a gay marriage case for lack of a "substantial federal question" in the 1970s. As the court once again weighs the issue of gay marriage, here's a look at how the debate has touched American life.

"My father called me after seeing that episode," Cruz says, "and, because of seeing it, said that he understood better what it was that I went through."

People watching at home understood, too. Four years later, an awful real-life story opened people's eyes even wider. In Wyoming, Matthew Shepard was tortured and murdered for being gay.

His mother, Judy Shepard, received tens of thousands of letters from strangers, including many mothers.

"Especially young moms who were just starting their families, who said, 'I will never teach my children that hate. ... I'm going to be different as a parent, and I'm not going to teach hate to my kids, like maybe my parents taught me,' " she says.

Her son's death seemed to flip a switch for many Americans. After seeing Matthew Shepard, it no longer felt like enough to say "live and let live."

"He spoke to the straight community in a way that I'm not sure other incidents did," his mother says. "People recognized him as he could've been their neighbor, their son, their grandson."

Still, two years later, when Vermont became the first state to legalize civil unions for gay couples, it was a national earthquake. Then-Gov. Howard Dean signed the bill in 2000.

"The phone calls, from mostly out of state, were so awful," he recalls. "I actually took a turn, without identifying myself, answering the phone in the office just to see how hateful they were, and they were really repulsive."

It got worse. Dean says there were death threats.

"My security detail asked me to wear a bulletproof vest for the summer when I was campaigning after I signed it," Dean says.

For all the controversy, civil unions soon took a back seat to the push for marriage. In 2004, the Massachusetts Supreme Court allowed gay couples to wed.

On May 17 in Cambridge, Rob Compton and David Wilson took their vows in front of their kids and grandkids. They were plaintiffs in the marriage case and among the first to wed. 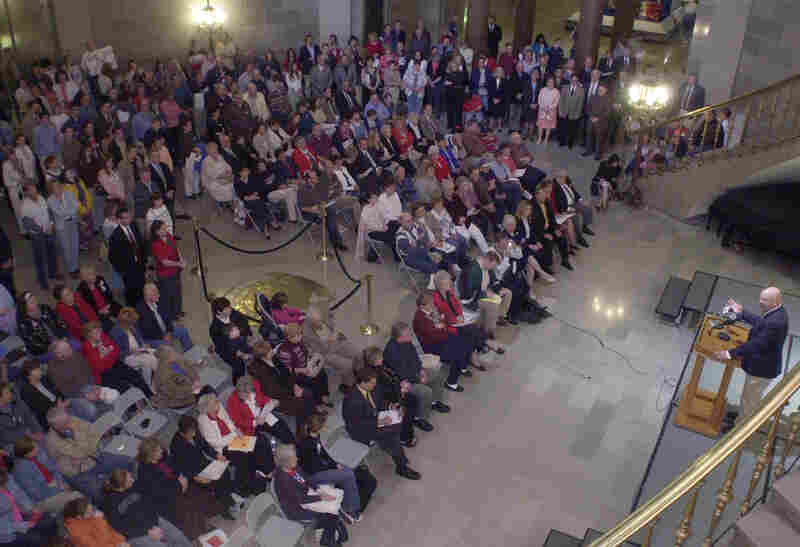 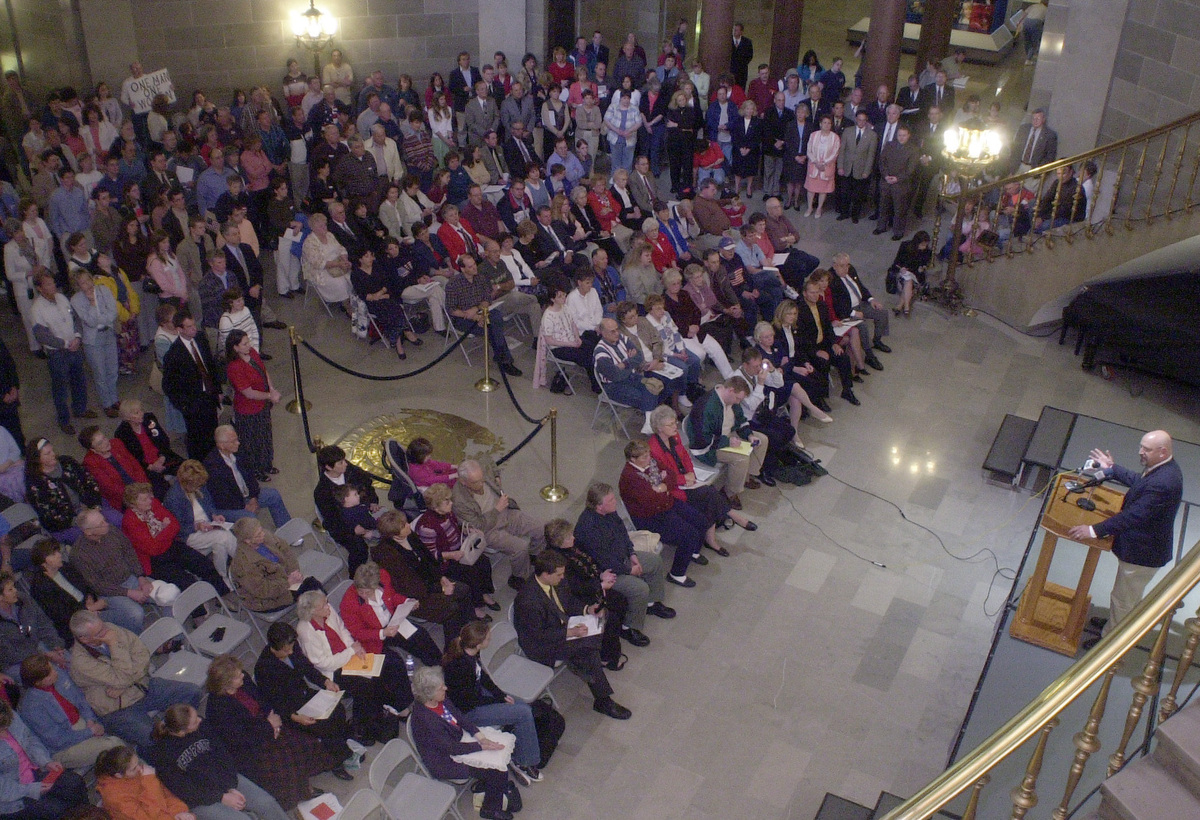 Missouri state Rep. Kevin Engler, a Republican, speaks during a rally for a state constitutional amendment banning gay marriage on May 3, 2004, in Jefferson City, Mo.

As other parts of the country took steps in the same direction, a backlash began. On Election Day in 2004, 13 states passed constitutional amendments banning same-sex marriage.

Missouri state Rep. Kevin Engler sponsored the ban in the Missouri House. Today he says he has gay friends and colleagues, and he wants them to have legal protections — but not marriage.

"In Missouri, we still have a law saying that you can fire somebody if they tell you they're gay," he says. "And I don't think that's right. I don't think we should be persecuting people, nor do I think that we should allow the sanctity of marriage to be performed by gay or lesbian people."

Engler accepts that the country is moving away from his view. But he thinks it's a shift in the wrong direction.

"Things, yes, do change to become the norm, but that doesn't mean that that's necessarily the right thing," he says. "It used to be once it was a shame and embarrassment if you were a single mother. Now ... there may be eight birth announcements in the paper and there won't be one or two that are married."

Frank, the former representative who thought he could never have a political career as an openly gay man, married his husband last year just before he retired from Congress.

"My problem was, you know, from where I started ... thinking, 'I'll never be able to come out; I'll never win.' You get to 2012, when my problem was dealing with hurt feelings from members of Congress I hadn't been able to invite to the wedding because we had to put a limited size on it," Frank says.

Next week, the Supreme Court hears challenges to California's gay marriage ban and to the law known as the Defense of Marriage Act. These will be the next major steps on a path the country has traveled for decades. We won't know for months which direction the steps will be.