Accessibility links
The Abnormally Normal Science Of Sinkholes When a Florida man vanished into a massive sinkhole that opened underneath his home in February, the case garnered national attention. But geologists say sinkholes occur regularly without much notice. 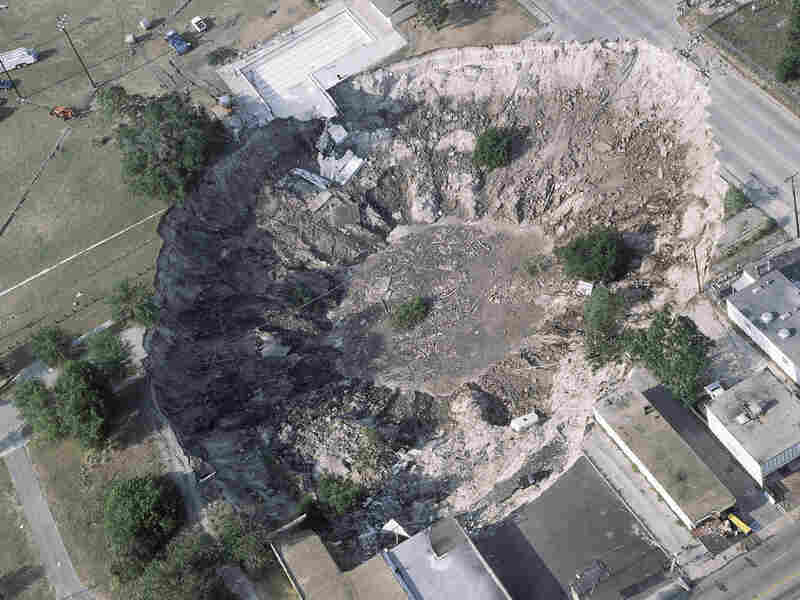 In the spring of 1981, a woman's house and part of a car dealership were swallowed by a sinkhole in Winter Park, Fla. AP hide caption 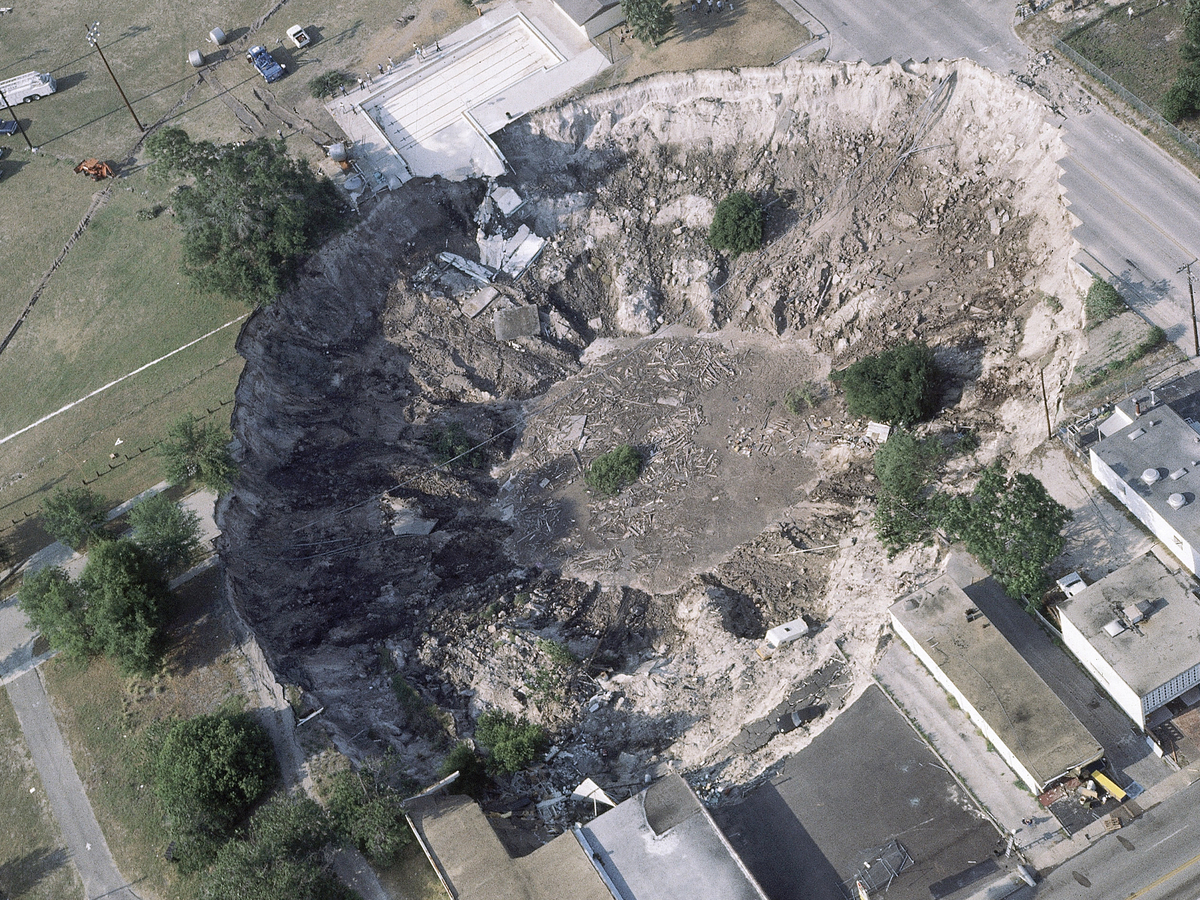 In the spring of 1981, a woman's house and part of a car dealership were swallowed by a sinkhole in Winter Park, Fla.

When a Florida man vanished into a massive sinkhole that opened underneath his bedroom in February, the case garnered national attention. Every so often, tragedies like this put sinkholes in the spotlight.

Researchers say that minor sinkholes occur all the time around the world without much notice.

Lewis Land, a hydrologist at the New Mexico Bureau of Geology and Mineral Resources, is one of the organizers of the 13th Multidisciplinary Conference on Sinkholes and the Engineering and Environmental Impacts of Karst. Karst is a term for landscapes made of porous, soluble rock — areas where sinkholes are naturally prone to occur.

Since 1984, geologists, hydrologists, biologists and other researchers have gathered every few years to share knowledge and research about karst terrain.

Land talks with NPR's Celeste Headlee about what happens when Earth swallows things.

On where sinkholes occur

"If you see one sinkhole, then chances are that you are in an area that is prone to sinkhole formation. There are specific geological conditions that make an area more likely to have sinkholes. And so there are parts of the country — and north and central Florida is notorious — for sinkhole formation. Western Illinois is another area, western Kentucky, and ... they occur pretty frequently in those parts of the country.

"One of the things that causes sinkholes — one of a number of mechanisms — is excessive groundwater withdrawals. And if you're in an area that's experiencing a drought ... there might be a lot more pumping going on. And that's one thing that could trigger a sinkhole formation."

On possibilities for predicting sinkholes

"You might get an early warning. You might see some, say, concentric fractures forming in the ground. But in some cases, it just happens without much warning at all, unless your property ... has all sorts of geotechnical monitoring systems on it. In some cases, you just don't know until it happens. ...

"But no seismologist can predict exactly where and when an earthquake will occur within a few days or weeks. ... There's a variety of different geophysical techniques that you can use to survey an area and determine if there [are] cavities in the subsurface. They cost money. ... Most homeowners can't afford to have that kind of thing done."

On how human activity can lead to sinkholes

"Excessive groundwater withdrawal for irrigation purposes, for example, can sometimes trigger a sinkhole because it depressurizes the aquifer. Another mechanism that ... occurred here in New Mexico a couple of years ago was brine well pumping. There was a company here that was injecting freshwater into the salt beds in the subsurface and dissolving out the salt to form brine. ...

"They're using the brine for drilling fluid in the oil fields here. And it was legal. They had a permit from the state. But what you effectively are doing is creating a big cavity in the subsurface. And that big cavity collapsed in two different places, about 20 or 30 miles north of Carlsbad, and created very large sinkholes."

On what you do to fix a sinkhole

"A mistake that a lot of people make when they are doing what we would call sinkhole remediation. They think the simplest thing to do is to just fill it full of dirt. ... The problem is you've got a conduit into the subsurface that ultimately caused that sinkhole.

"It's connected to the aquifer — in most cases to some underlying aquifer. And if you don't take care of that, then all you're doing is exacerbating the problem, and you're likely to have another collapse. ... There are engineers whose specialty is sinkhole remediation, and they spend a lot of time and a lot of engineering skill to try to identify those subsurface passages so that they can fill them up with things like grout, for example."

On how the sinkhole convention came to be

"It's a pretty specialized field. ... It was initiated because of the sinkhole that formed in Winter Park, Fla,, and swallowed up a woman's house and part of an import car dealership and a swimming pool. ...

"Insurance companies didn't really know anything about sinkholes, and so ... for a while there, the Legislature was funding a sinkhole research institute. ... And the conference series has been going. It takes place every two or three years and has been since the 1980s."