Accessibility links
Movie Review - 'Hunky Dory' - An Indie Musical As Breezy As The Summer Term It Depicts As chipper and breezy as the summer term its students long to escape, the indie musical Hunky Dory cheerfully ignores the consequences of its plot holes. A spirited performance from Minnie Driver holds interest, though, as does a David Bowie-focused Shakespearean musical. 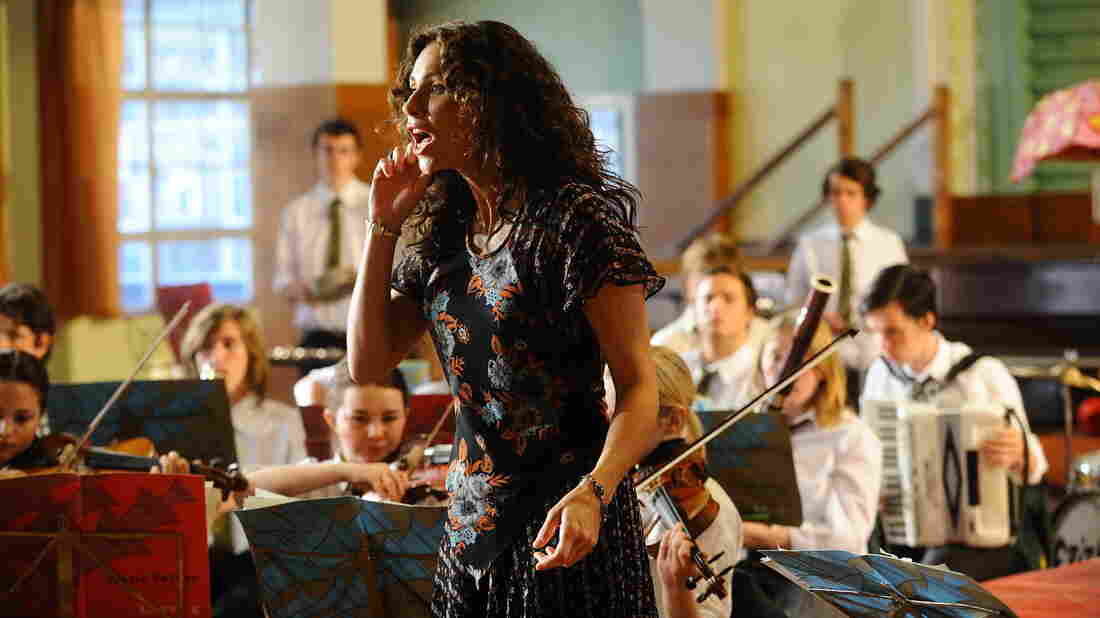 Free-spirited drama teacher Viv (Minnie Driver) hopes to use a summer musical production of The Tempest to give her students a chance to express themselves in Hunky Dory. Variance Films hide caption

Set in a seaside town in Wales in the summer of 1976 — the U.K.'s warmest summer on record — Hunky Dory follows the passion project of Vivienne (Minnie Driver), a free-spirited high school teacher who wants her senior students to stage an unconventional production of The Tempest that David Bowie would be proud of. When Viv promises contemporary music and a freer classroom environment, the students are sold. That is, until the last two weeks of school arrive.

It's the height of summer, and the kids have checked out completely, missing rehearsals and thinking way more about the beach and who's wearing what there than about their studies. Davey (Aneurin Barnard), cast as the play's romantic lead, Ferdinand, is busy going after his Miranda, Stella (Danielle Branch), only he hasn't noticed yet that she's lost interest. Mandy (Jodie Davis) is busy pining after Evan (Tomos Harries), while Lewis' (Adam Byard) best friend is secretly seeing his sister.

With all these distractions, it's no wonder Viv's tolerant teaching style isn't inspiring cooperation.

Most of the teachers are as apathetic as the seniors, uninterested in both the students' problems and their potential. Some, like the prickly social-studies lecturer, have given up long ago and barely hide their disdain for their working-class wards.

Viv, though, is determined to give her students a rare opportunity for self-expression in a space free from the pressures of home and classroom. With many of her students not planning to go on to university, this will be the last time anyone takes a real interest in their development. 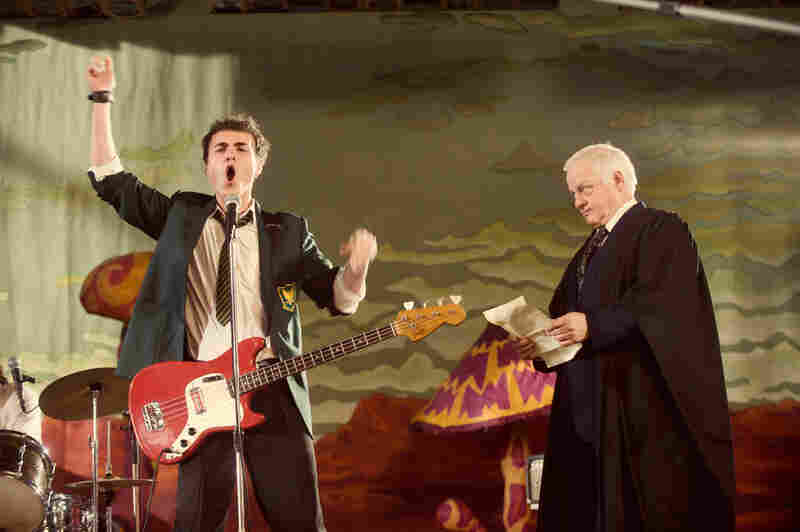 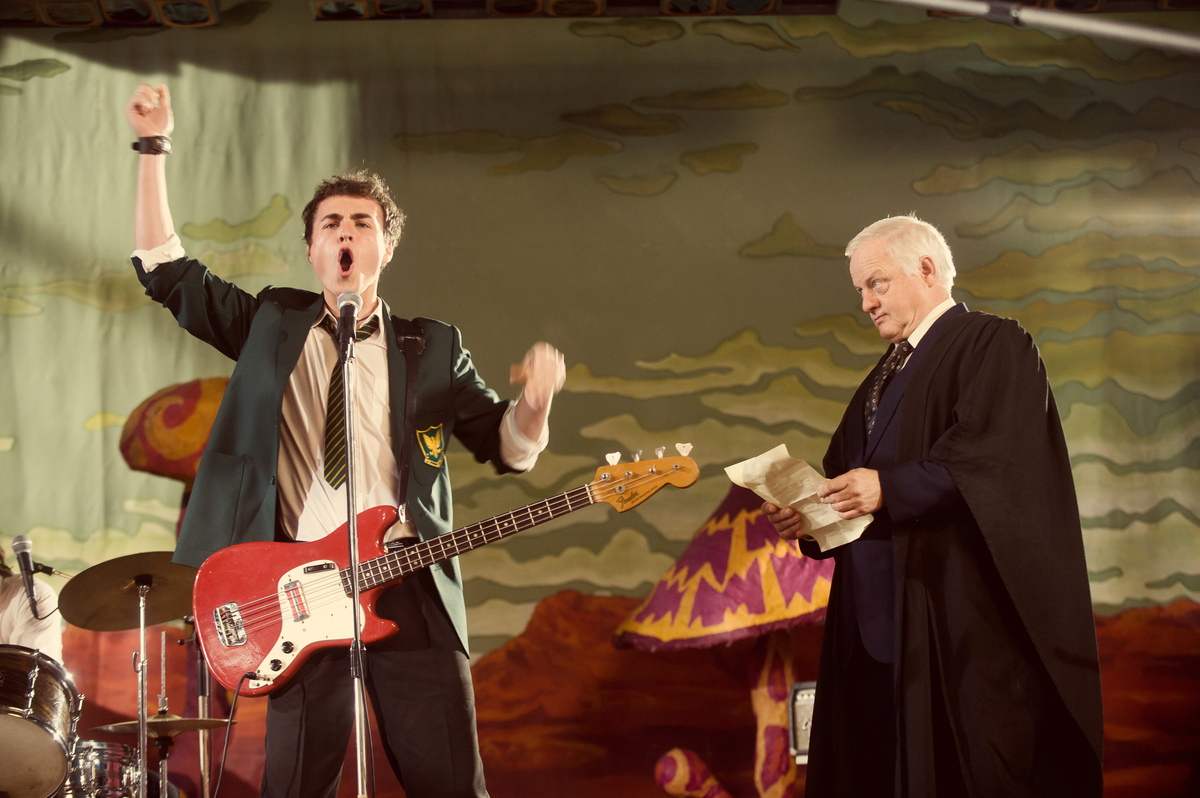 Shakespeare's words don't play much of a role, but the play's situations provide the occasion for glam- and folk-rock songs the kids can actually connect with. They want to perform Bowie, Iggy, and Zeppelin, and although A Midsummer Night's Dream might seem more appropriate to the season and the movie's mismatched teenage lovers, a (Life on) Mars-set Tempest makes a certain sense: It blends the strangeness of Prospero's island with the dreamlike music of the time, and with its themes of rebellion and romantic and sexual confusion.

The Tempest is also an apt choice for its outsider characters: Viv casts the popular but closeted Evan as the sprite Ariel, and Kenny (Darren Evans), a boy teased at school and pressured at home into going skinhead, as the malignant, exploited grotesque Caliban.

Their teacher's encouragement is well-intended, but the vulnerability possible in the rehearsal space doesn't extend to the rest of the world, and the line between exploring emotions healthily and getting more than you asked for inevitably blurs. Jealousy, betrayal, bullying, the overflow of problems at home, even the specter of an inappropriate student-teacher relationship threaten to manifest when Viv opens the emotional floodgates.

Even with those dangers lurking just out of sight, Hunky Dory flits along blithely from number to transporting musical number until it ends — with a sigh — and dodges any authentic engagement with its own ideas. Just as the consequences of Viv's teaching methods and the dynamics of the kids' final, fraught summer threaten to boil over, a final song fades up to solve everything, or at least to suggest that these problems don't really have solutions.

The Tempest, too, ends on a lighter note than it might, with Prospero's hand stayed from vengeance, but that fantasy doesn't deal in the messiness of class, sexuality, peer pressure and identity-questioning at the coming-of-age juncture that Hunky Dory initially hopes to address. That's not necessarily a bad thing — just don't expect more than a passing summer breeze.