Accessibility links
Daily Variety Magazine Drops Its Daily Print Edition, Continues Online And In Weekly Showbiz info is everywhere now, making it harder to sustain Hollywood's slang-filled must-read as a daily print publication. The magazine printed its last daily this week but will continue online and in a weekly edition. Cultural historian Neil Gabler explains why this shift is significant. 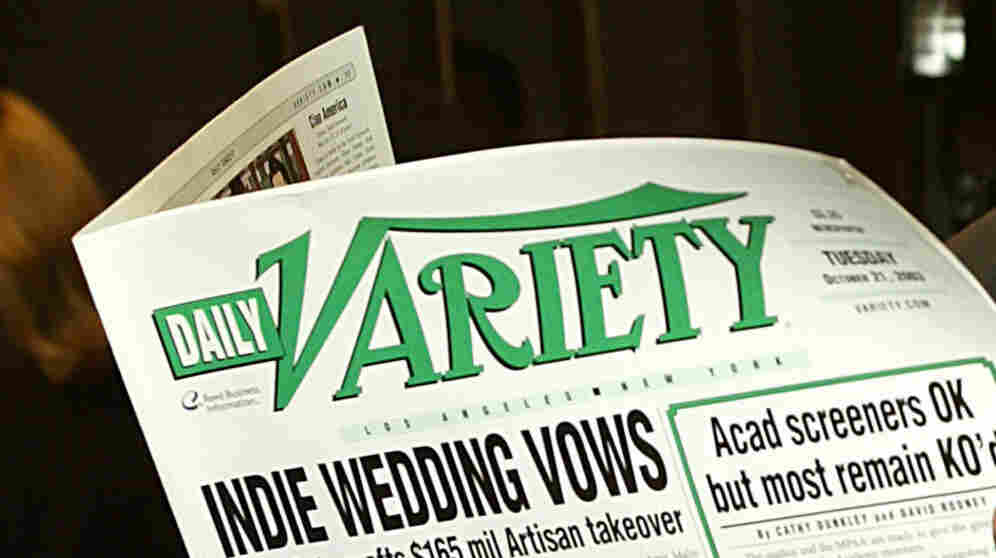 Print versions of Daily Variety, like this one from 2003, will no longer be available on L.A. newsstands. Variety will continue online and in a print weekly, but the daily print edition is being dropped. Kevin Winter/Getty Images hide caption 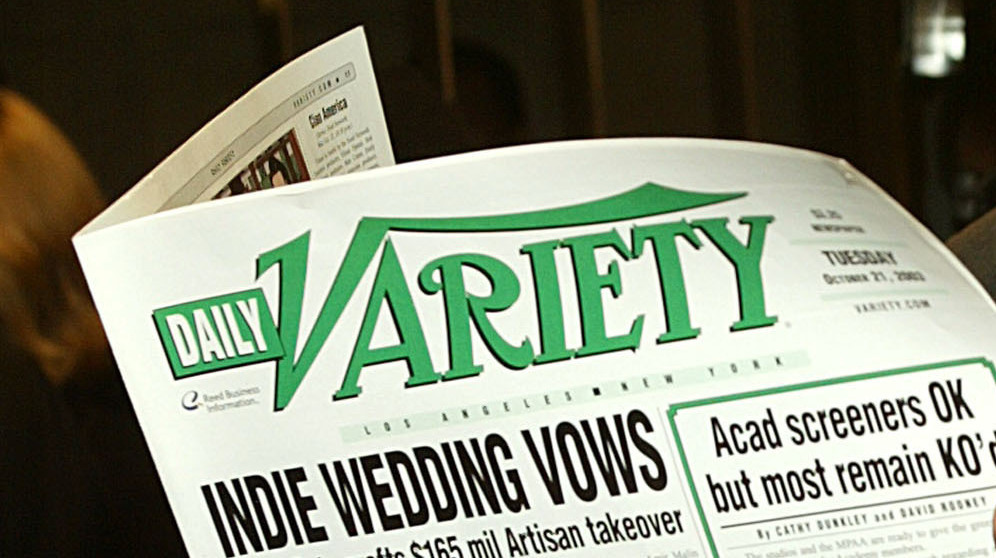 Print versions of Daily Variety, like this one from 2003, will no longer be available on L.A. newsstands. Variety will continue online and in a print weekly, but the daily print edition is being dropped.

For eight decades, Daily Variety has been a Hollywood must-read for everyone from studio heads to actors looking for a big break. But the days of assistants running out to grab the "trades" are over: This week, the Los Angeles institution published its last daily edition.

Daily Variety will continue online — or on the "info-pike," as the magazine would say in its distinctive "slanguage" — and a print magazine will still appear on a weekly basis. The shift away from a daily reflects the fact that, like many other publications, Daily Variety has been buffeted by changing reader habits as well as major shifts in the industry it covers.

Neil Gabler, a cultural historian at the University of Southern California's Norman Lear Center, joins NPR's Renee Montagne to explain the importance of Variety, decode some of its slang and explain how the world of Hollywood news has transformed.

On why Daily Variety was so important in Hollywood

"Well, first of all Daily Variety was itself a product of technological change. Variety began as a weekly in 1905, and it covered primarily Broadway and vaudeville. But as the motion picture industry became more important, in 1933 Variety decided that it need a Los Angeles edition and a daily edition that spoke primarily to the motion picture industry. And it became one of the two basic sources of news for the motion picture industry, the other being The Hollywood Reporter. Every day, virtually every executive, every author — in fact every stagehand — would get their copy of Daily Variety and thumb through it to see what films were being put into production, what the grosses were, what executive was being fired. This was the place that everyone in Hollywood went for information."

"In the early days of Variety, there were all sorts of 'slanguages' that were used by the pape, and that eventually crept its way into the Hollywood daily version as well. Things like 'boffo' when a picture was doing well; or, you know, a director never directed a film, he 'lensed' a movie. No one ever signed a contract — they 'inked' a contract. These were the sorts of things that became legendary."

On what led Variety to stop daily publication, and how Hollywood is reacting

"The same thing, by the way, happened to The Hollywood Reporter, the chief rival of Variety. Several years back it also ceased its daily publication went to a weekly and went primarily online. But there's an old saying, that everybody has two businesses, his own business and show business. And I don't think that's ever been truer than over the past 20 years. You can find show business information everywhere. Once upon a time, if you wanted to know what a film grossed, you would have to go to Variety or to The Hollywood Reporter. There weren't grosses available anywhere else. Well now we all know that on Sunday night on our local news we get the film grosses for that weekend.

"I think there is sadness. ... I think there was this kind of ritual that almost everyone in Hollywood had gone through, where they'd grab their coffee and they'd grab their Daily Variety, and they'd sit there — probably looking for their own names. ... But I think now that ritual is gone. That's all gone, and now it's going to be part of nostalgia rather than part of routine."