Accessibility links
As Support For Gay Marriage Grows, An Opponent Looks Ahead Maggie Gallagher is one of the nation's most public opponents of gay marriage. These days, she's thinking more about how to continue advocating for marriage between one man and one woman, even as society's views — and laws — are shifting rapidly. 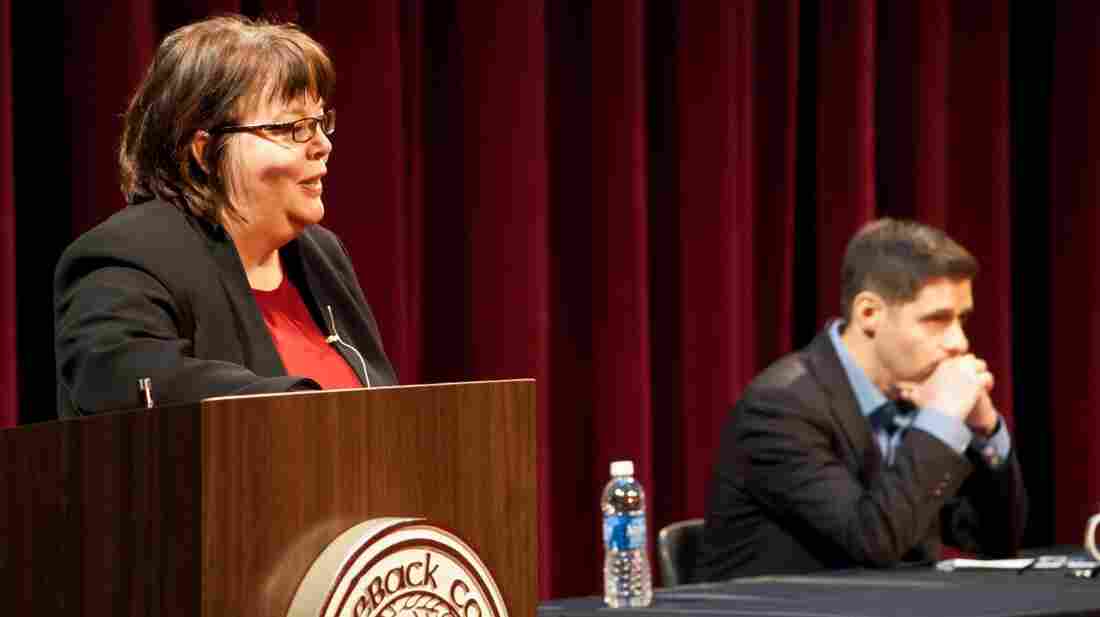 Maggie Gallagher has been an outspoken opponent of gay marriage for the past decade. She debated the issue at Saddleback College this month with John Corvino (right), a gay-marriage proponent who is also a personal friend. The Lariat/Robert Cody Shoemake hide caption 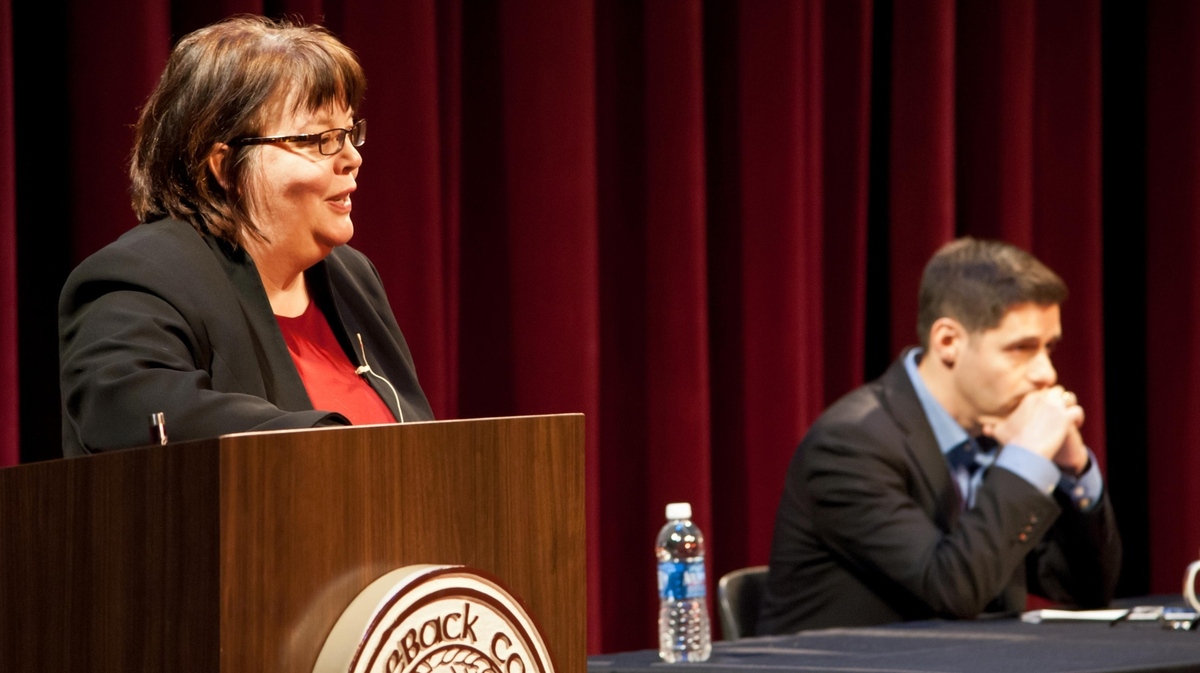 Maggie Gallagher has been an outspoken opponent of gay marriage for the past decade. She debated the issue at Saddleback College this month with John Corvino (right), a gay-marriage proponent who is also a personal friend.

As the U.S. Supreme Court prepares to weigh in on gay marriage, Maggie Gallagher, one of the nation's leading voices in opposition to same-sex marriage, is also preparing for what might come next.

Gallagher, co-founder of the National Organization for Marriage, likes to call herself an "accidental activist." After graduating from Yale in 1982, she thought she'd become a writer and focus on what she called "important things," like money and war. She never fathomed she'd end up on TV almost daily, smack in the middle of the war zone over gay marriage.

Indeed, Gallagher only started speaking against gay marriage in 2003, when, she says, she could no longer avoid it. She'd spent the prior decade publically warning about the decline in marriage in general — how the sexual revolution, feminism and divorce were threatening the institution and children. Then gay marriage lurched out as the biggest threat of all.

Gallagher's crusade to save the institution of marriage was driven by her own experience as a young, unwed mother and the pain she saw in her own son.

"By time he was 2, he was asking where his dad was," Gallagher says. "And I think it's wrong to deliberately create a child, consciously depriving them of either their mother [or] father."

Gallagher's beef with gay marriage is actually more practical than moral or religious — although she is a practicing Catholic. If you believe that kids need a mom and dad, she argues, you simply can't endorse same-sex marriage at the same time. If you do endorse gay marriage, her argument continues, you automatically send the message that a married mom and dad are not really critical. And then, she insists, more kids will end up hurt.

I'm thinking more hard about — how do we sustain the ideal of marriage that I care about if this idea is treated as the moral and legal equivalent of racism in the public square?

"I don't like saying this, in one way, because it's not like a contest. But in truth, the suicide rates of teenagers whose parents divorce are elevated at about same rates as teenagers who are LGBT," Gallagher says. "But we don't hear much about the one and we hear a lot about the other. You know, Lady Gaga is not making songs about it."

That's exactly why Gallagher says she's focusing now on what she calls "culture creating." She's not quitting the fight, she says, but rather making sure that even if the legal battle ends, the fight for traditional marriage will go on.

"I'm thinking more hard about — how do we sustain the ideal of marriage that I care about if this idea is treated as the moral and legal equivalent of racism in the public square?" she says.

She recently gave up the weekly syndicated newspaper column she's been writing for 17 years, so she could focus more on the "big picture." But Gallagher says she will continue writing on her blog and speaking publically.

Earlier this month, she debated the issue at Saddleback College in Mission Viejo, Calif., with Wayne State University philosophy professor John Corvino, a gay man and gay-marriage advocate. He is also the co-author of Gallagher's book Debating Same-Sex Marriage — and a personal friend.

"People often ask me how, I, as a gay man, can be friends with someone who's fighting against my rights," he says as the debate opens. "The answer to that question is very simple: I drink."

The auditorium is filled with students who overwhelmingly favor gay marriage, but Gallagher — as tough as she is sharp — pulls no punches.

Several students stand up to push back, some calling her argument offensive. But Gallagher is unapologetic. "That cannot stop me from talking for these children on this issue," she says. "Because I think it's too important."

A 'Culture Of Marriage'

These days, Gallagher spends less time making her case against gay marriage than she does trying to convince people that there's even a legitimate case to be made.

"I have always believed that gay people are human beings with human dignity who need to be treated with respect," Gallagher says. "But that's different from having a foundational norm that says there is no morally relevant difference between same-sex and opposite-sex relationships and [that] if you see one, you're like a bigot who's opposed to interracial marriage."

If being on the front line of such a heated debate takes a toll on Gallagher, she doesn't show it.

"I'm not worried about me. Maggie's fine. Everything's cool," she says. "I do worry about other people — I worry when I get an email from a woman who's a nurse in a hospital, who wrote a letter to the editor opposing gay marriage, and finds that she fears her job is in jeopardy."

Gallagher has earned the respect of some of her opponents, as being smart, well-intentioned and pretty good about the facts. But even those admirers balk at her claim that gay-marriage opponents are being victimized.

"I mean, Barack Obama was against gay marriage until less than a year ago," says Jonathan Rauch, a fellow at the Brookings Institution who's also friendly with Gallagher. "No one went around saying, 'The guy's a bigot.' "

But Rauch says it is true that the shifting moral consensus is leaving gay-marriage opponents in a position that gay people know all too well.

"I don't think what Maggie has had is a fraction of what gay people have had," Rauch says. "That said, it's still difficult when you feel that society is just not getting it. I know it's hard. I've been there."

It's easier to feel empathetic, Rauch says, knowing that Gallagher is not motivated by animus. But knowing her to be intelligent and thoughtful can also be more exasperating for those who disagree with her.

Corvino says he remains frustrated by what he calls her "blind spot." Gallagher's argument "goes from what is not true to what does not follow," he says. Even if you accept her premise that a mother and father is the ideal for every child, it doesn't follow that society should outlaw everything else. It could also be true, he reasons, that a specific number of siblings is best for a child or a certain level of family wealth, but society doesn't restrict marriage, or parenting, based on those criteria. If Gallagher's goal is to strengthen marriage, he says, she should want everyone to marry. It's a paradox that has troubled him since their very first conversation.

"I pulled out my cellphone at one point and showed her a picture of my partner, Mark," Corvino recalls. "And he's got this great smile and she looked at the picture, and she said, 'Oh, I can see why you call him home. He's home for you.'

"And I thought to myself, 'Well, wait a second — how can you get that Mark is home for me ... but spend your life fighting to make it the case that, legally speaking, Mark cannot be home for me?' You know, there's definitely a disconnect there," Corvino says.

'I Just Don't Believe In Inevitability'

What Gallagher will never understand, however, is how gay marriage could ever be considered "marriage." She's focusing now on new ways to strengthen what she calls the "culture of marriage," through the arts and churches, for example.

With several polls now showing public support for gay marriage at greater than 50 percent and growing, Gallagher says she's less optimistic about her cause than she used to be, but still holds on to hope.

"I was told when I was young that there would be no more people opposing abortion and that communism was the inevitable way of future," she laughs. "So, first of all, I just don't believe in inevitability."

But Gallagher has definitely adjusted for the possibility. A decade after declaring that gay marriage was threatening civilization, her mission has evolved from staving off the threat to making the world safe for dissent.