Accessibility links
In Saudi Arabia, Shiite Muslims Challenge Ban On Protests When demonstrators began rising up against Arab governments in 2011, Saudi authorities responded with large spending projects and with tough actions against protesters. However, the Shiite minority in eastern Saudi Arabia persists with regular demonstrations. 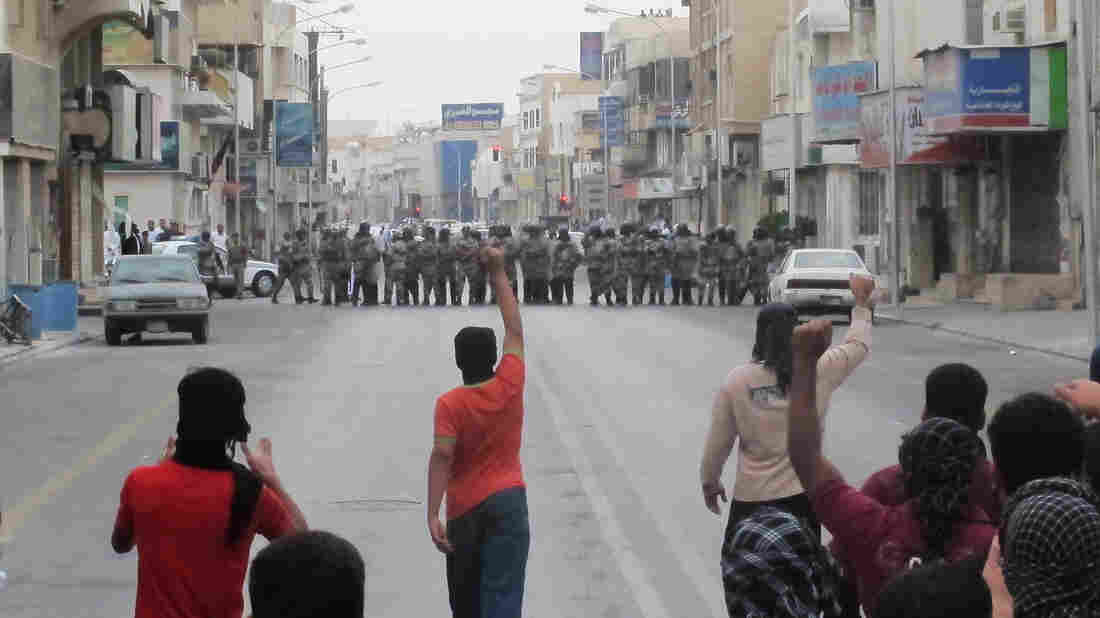 Anti-riot police face off with protesters in Saudi Arabia's eastern city of Qatif on March 11, 2011. Despite bans on the demonstrations, Shiite Muslims in the eastern part of the country have continued to stage protests, demanding political changes. Reuters /Landov hide caption 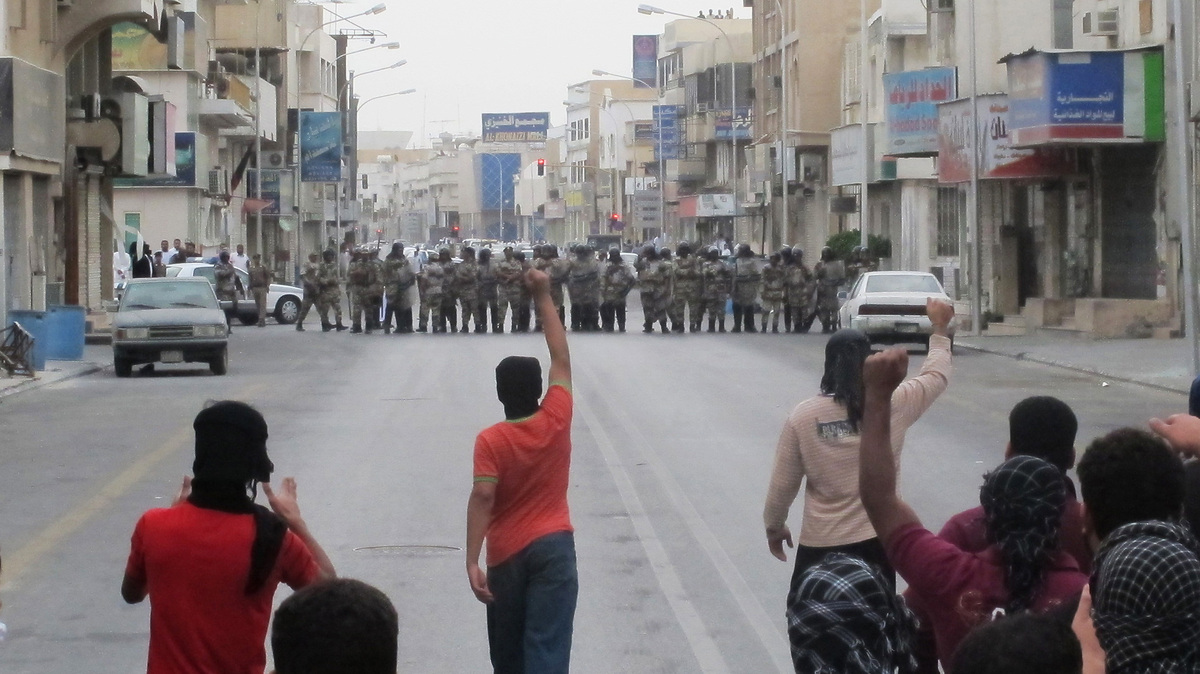 Anti-riot police face off with protesters in Saudi Arabia's eastern city of Qatif on March 11, 2011. Despite bans on the demonstrations, Shiite Muslims in the eastern part of the country have continued to stage protests, demanding political changes.

Editor's note: When Arab Spring protests broke out in Saudi Arabia in 2011, the government reacted quickly, pumping $130 billion into the economy and cracking down on dissent. While this approach has worked in some cities, the Shiite Muslims in the Eastern Province continued to demonstrate. Reese Erlich, on assignment for GlobalPost and NPR, managed to get into the city of Qatif and meet with protest leaders.

Night has fallen as the car rumbles down back roads to avoid the Saudi Army's special anti-riot units. To be stopped at any of the numerous checkpoints leading into Qatif would mean police detention for a Western journalist and far worse for the Saudi activists in the car. They would likely spend a lot of time in jail for spreading what Saudi authorities deem "propaganda" to the foreign media.

Demonstrations are illegal in Saudi Arabia, but here in Qatif, residents have defied the ban for many months. At least once a week the mostly young demonstrators march down a street renamed "Revolution Road," calling for the release of political prisoners and for democratic rights.

The anti-riot units deploy armored vehicles at strategic locations downtown. The word on this night is that if demonstrators stay off the main road, the troops may not attack.

Minutes later several hundred men march down the street, most with their faces covered to avoid police identification. Shiite women wearing black chadors, which also hide their faces, follow closely behind, chanting even louder than the men.

One of their banners reads, "For 100 years we have lived in fear, injustice and intimidation."

Despite two years of repression by the Saudi royal family, Shiite protests against the government have continued here in the Eastern Province. Though Shiites are a small fraction of Saudi Arabia's 27 million people, they are the majority here. Most of the country's 14 oil fields are located in the Eastern Province, making it of strategic importance to the government.

Shiites have protested against discrimination and for political rights for decades. But the Arab Spring uprisings of 2011 gave new impetus to the movement. Saudi Arabia is home to two of Islam's most holy cities, and the government sees itself as a protector of the faith. But its political alliances with the U.S. and conservative, Sunni monarchies have angered many other Muslims, including the arc of Shiites stretching from Iran to Lebanon.

The government cannot follow everybody's Twitter user name. The authorities have to be selective and, hopefully, they don't select my name.

Abu Zaki, the pseudonym of a Shia Muslim protester in eastern Saudi Arabia

Saudi officials claim they are under attack from Shiite Iran and have cracked down hard on domestic dissent.

Saudi authorities are responsible for the death of 15 people since February 2011, according to Waleed Sulais of the Adala Center for Human Rights, the leading human rights group in the Eastern Province. He says another 60 people have been injured in that time and that 179 detainees remain in jail, including 19 children under the age of 18.

The government finds new ways to stifle dissent, according to Sulais. Several months ago the government required all mobile phone users to register their SIM cards, which means text messaging about demonstrations is no longer anonymous.

Abu Zaki, who uses a pseudonym to prevent government retaliation, says demonstrators now rely on Facebook and Twitter, along with good old word of mouth. Practically everyone at the recent Qatif protest march carried iPhones. Some broadcast the demo in near real time by uploading to YouTube.

Organizers hope their sheer numbers, along with government incompetence, will keep them from being discovered.

"The government cannot follow everybody's Twitter user name," says Abu Zaki. "The authorities have to be selective and, hopefully, they don't select my name."

When protests began, demonstrators called for reforms. But now, younger militants demand elimination of the monarchy and an end to the U.S. policy of supporting the king.

Abu Zaki and several other militant activists gather in an apartment in Awamiyah, a poor, Shiite village neighboring Qatif. In this part of the world a village is really a small town, usually abutting a larger city. Awamiyah is one such town, chock full of auto repair shops, one-room storefronts, and potholed streets. It is noticeably poorer than Sunni towns of comparable size.

Strong, black tea is served along with weak, greenish Saudi coffee. The protest movement in Qatif, they observe, resembles the tea more than the coffee.

Abu Mohammad, another activist who uses a pseudonym, tells me protests have remained strong because residents are fighting for both political rights as Saudis, and against religious and social discrimination as Shiites.

Shia face discrimination in jobs, housing and religious practices. Damman, the largest city in the area, has no Shia cemetery, for example. Only six Shia sit on the country's 150-member Shura Council, the appointed legislature that advises the king.

"As Shia, we can't get jobs in the military," says Abu Mohammad. "And we face the same political repression as all Saudis. We live under an absolute monarchy that gives us no rights and steals the wealth of the country."

The government denies those claims of discrimination and repression. In the capital Riyadh, Maj. Gen. Mansour al Turki, spokesperson for the Ministry of Interior, is the point man who often meets with foreign journalists. Al Turki is smooth and affable and practiced at the art of being interviewed by Westerners.

He dismisses Shiite charges of discrimination as simply untrue.

"These people making demonstrations are very few," he tells me. "They only represent themselves. The majority [of Shiites] are living at a very high level."

Such assertions, however, don't account for the frequent and sizable Eastern Province demonstrations supporting Sheik Nemer al Nemer. The charismatic Shiite cleric has long been a thorn in the government's side. His willingness to speak out against discrimination and call for militant action endeared him to the younger generation of activists. For months he avoided arrest by shifting residences and only appearing in public during large rallies.

Then in July 2012 authorities made an arrest while he was briefly visiting his house in Qatif. He was shot and seriously wounded. Police claim it was an armed shootout in which they fired in self defense.

The sheik was unarmed, according to his brother, Mohammad al Nemer. He says his brother hasn't been publicly charged, but has been told that he faces a long jail term for instigating unrest against the king and organizing illegal demonstrations.

Four police bullets shattered his brother's thigh bone, says al Nemer. "If he doesn't receive proper medical care, he will have a lame leg for the rest of his life."

Al Nemer's popularity has grown exponentially since his arrest, with graffiti demanding his release sprouting up throughout the area and marchers regularly chanting his name.

Shiite leader Sheik Mohammed Hassan al Habib offers understanding of the continuing protests. The cleric lives in a modest home on a side street outside Qatif. Al Habib adds something special to the usual proffering of tea and coffee: Swiss chocolate.

Al Habib tells me that the Eastern Province movement seeks democratic reforms while maintaining the power of the monarchy.

"We need to give real power to the parliament," he says. "The government should allow establishment of political parties, freedom of speech and assembly." But the king would still have final authority, he concedes.

"We don't want toppling or removal of the regime," he emphasizes.

He acknowledges, however, that many younger protesters have given up on reform. For example, activist Abu Mohammad says, "People now want the overthrow of the ruling family as a reaction to the escalation of repression in Qatif. I think the best form of government for Saudi Arabia is constitutional monarchy like they have in Britain."

While calling for a U.K.-style constitutional monarchy is rather tame by Western standards, it's treasonous in Saudi Arabia.

"People must complain through the legal process," argues the Ministry of Interior's al Turki. The legal process does not include calling for an end to the monarchy.

But neither government spending nor harsh crackdown have so far deterred the protesters in Qatif.

The demonstrators see themselves waging a political battle in which popular support can overcome the government's repressive apparatus. The Shiites of the Eastern Province are the only Saudis regularly holding protest marches, but as Shiite cleric al Habib tells me, Sunnis in other parts of the country also call for reform.

"We work with reformers who don't care about your sect," he tells me. "They look only for reforms. We hope Sunni and Shia will get together one day to pursue this goal."

After a sip of black tea and a final piece of chocolate, we say goodbye to the cleric and head out to that night's demonstration. Somehow we manage to avoid the checkpoints. And for that night, at least, there was no violence.

Freelance journalist Reese Erlich's reports from Saudi Arabia and Bahrain are part of a GlobalPost Special Report on the role of the Sunni-Shiite rift in the Middle East, in partnership with NPR.