Accessibility links
Can Detroit Return To Its Former Glory? A population exodus, as well as bad financial management, has put the city on the brink of bankruptcy. These drastic times forced the governor to appoint an emergency financial manager, who has the Herculean task of reviving what was once the bustling car capital of the U.S. 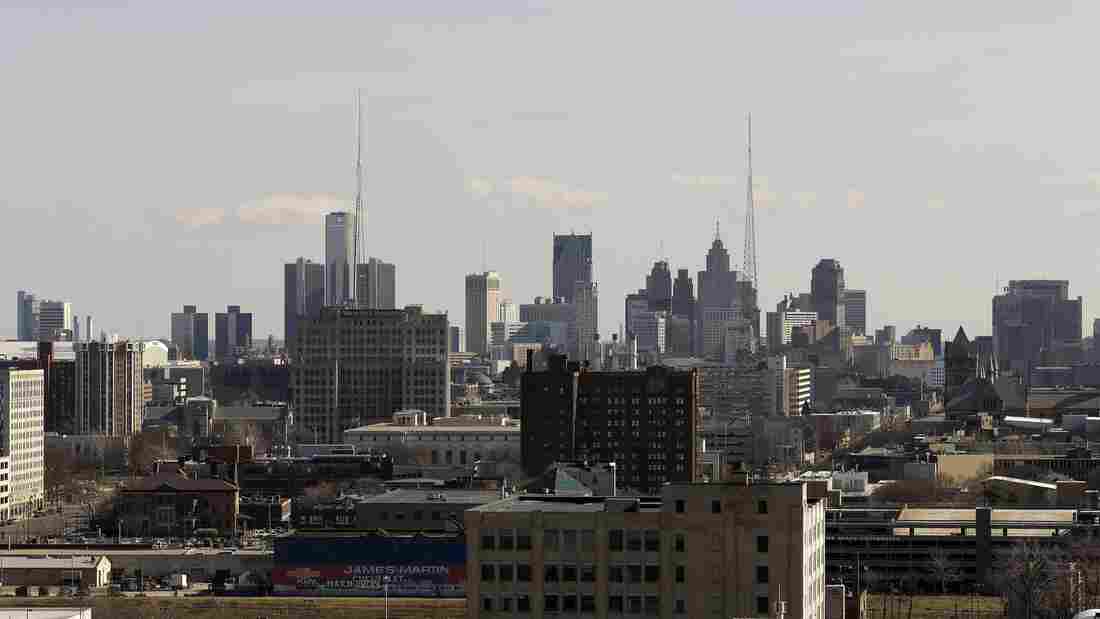 The population of Detroit has dwindled, and now there aren't enough taxpayers to pick up the tab for essential city services. Paul Sancya/AP hide caption 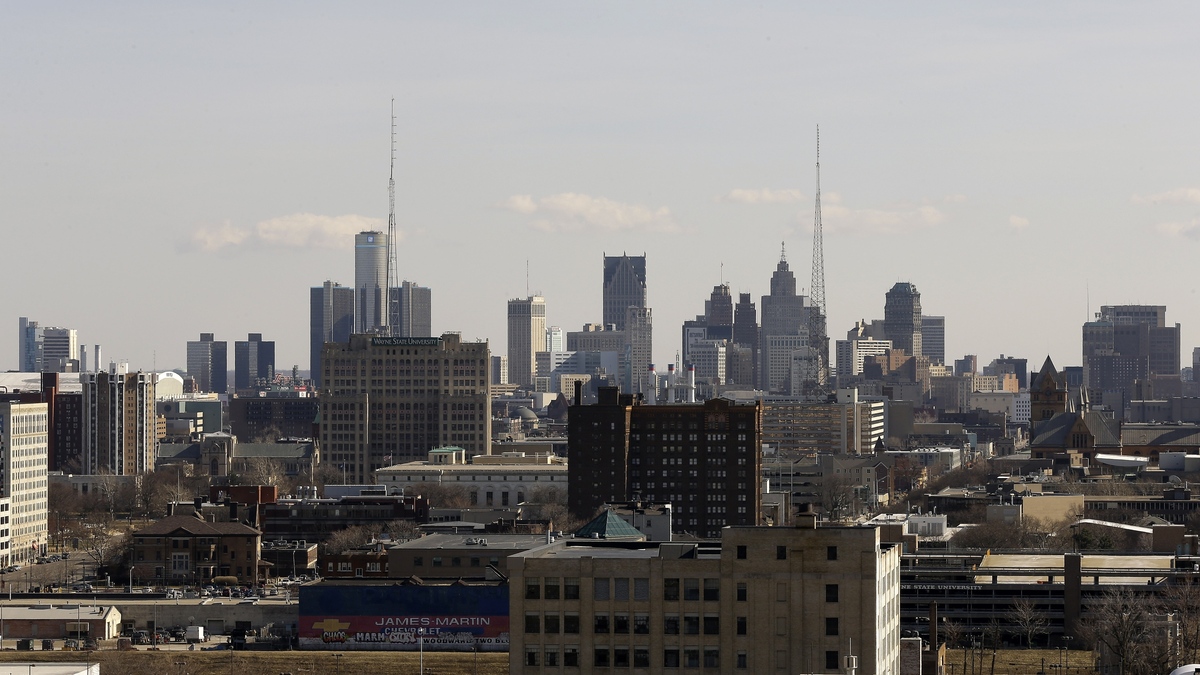 The population of Detroit has dwindled, and now there aren't enough taxpayers to pick up the tab for essential city services.

The newly appointed emergency financial manager of Detroit begins the Herculean task Monday of turning the once bustling capital of the car business back from the brink of bankruptcy.

Though Detroit still has its cultural centers, architectural gems, funky restaurants and packed sporting events downtown, the city has suffered an urban blight that has slowly eaten away at its neighborhoods.

"Detroit has become a ghost town," says Russ Wilson, who has lived in Detroit for all of his 47 years. "You can live on one block and live on a real nice block, and then the block over behind you can be so desolate and just deserted. It's horrible."

People are literally dying waiting for ambulances. The things that we would expect any city to deliver at a basic level just do not happen here.

"The blocks were full of people," he says, "children playing, people had jobs. But now people have no jobs; they have no hope."

In the 1940s and '50s, at the height of auto manufacturing, Detroit was a booming metropolis. But as the auto factories expanded, they opened new plants in the suburbs, taking working-class Detroiters with them. Racial tensions also led to "white flight" from the city.

Over time, the suburbs have sucked the population out of inner-city Detroit, it dropped by a million since 1950, leaving empty neighborhoods, abandoned properties and very few residents from whom to draw tax dollars to pay for everything.

Those that remained, says Scott Martelle, author of Detroit: A Biography, are increasingly stuck in poverty.

"In Detroit in the last census, 1 in 4 people hadn't graduated high school," Martelle says. "That compares with 1 in 10 in the state of Michigan. Thirty-six percent of Detroiters live below the federal poverty level, compared with 16 percent statewide."

The city of Detroit is large, about 140 square miles, that's enough room to fit Manhattan, Boston and San Francisco inside with room to spare, Martelle says. But the population has declined to just over 700,000 — that's fewer than the number of people on the National Mall for President Obama's second inauguration.

Imagine that number of people paying city taxes for the roads, public transportation, education and emergency services for a 140-square-mile city. It's just not efficient.

Is Hope On The Way?

Last week, Michigan Gov. Rick Snyder, a Republican, took a dramatic step by taking financial control away from the city government and putting it in the hands of Kevyn Orr, his chosen emergency financial manager. The move is completely legal under state law.

Some Detroiters, like 56-year-old Keith Higgins, are happy that someone is finally doing something about the city, which has been on the brink of bankruptcy for years.

"There's not decent management taking place in this city," he says. "Financially, there's been misappropriation of funds. There's been stealing, there's been lying [and] there's been cheating." Detroit's former Mayor Kwame Kilpatrick was recently found guilty of federal racketeering and corruption charges

But other residents are protesting what they see as a violation of their rights, since they didn't vote Orr into government and he now controls their tax dollars.

"I think everybody is of two minds about this," journalist Stephen Henderson tells weekends on All Things Considered guest host Don Gonyea.

Born and raised in Detroit, Henderson has written about the city government and the feelings of residents for the Detroit Free Press, where he is an editor.

"Anyone who lives here can tell you how awful city services have become," he says. "People are literally dying waiting for ambulances. The things that we would expect any city to deliver at a basic level just do not happen here."

At the same time, he says, no one is thrilled about the idea of an appointed financial manager taking away power from the people they've elected. Coupled with the fact that a Republican governor made the appointment for a Democratic city, Henderson says, people are even more suspicious.

At this point, however, he says the law is what it is.

"This is the process that we've chosen as a state to deal with cities and school districts when they get into financial trouble," he says. "It's one thing to say you're not happy about this; I think it's another thing to indulge the unreality of the idea that you can now stop it.

"It's really sort of a distraction from the work that we need Kevyn Orr to start doing on Monday," he says.

Detroit has been dealing with a loss of population and financial troubles for years, but the tipping point, Henderson says, is when agreements made between the Detroit City Council, Gov. Snyder and the state treasurer didn't take place over the last 12 months.

"The governor just had enough," he says.

Detroit's cash problems, Henderson says, are connected to the decline of the city's population and tax base over a very long period of time, and no one has had a great answer for fixing it.

"Detroit right now is collecting half the income tax money that it was just 12 years ago," he says. "We've got to figure another way to either downsize, so that we are only spending as much as we are taking in, or find a way to get more revenue to the table."

A Tale Of Two Cities

Detroit's plight sounds really bleak, but other cities have been in similar positions and have pulled out of the downward spiral.

In 1995, Washington, D.C., faced huge financial, education and crime problems similar to those in Detroit. And like Detroit, D.C. was subject to an emergency financial takeover.

Anthony Williams was the man appointed to handle the district's financial crisis. He went on to become mayor of the city for two terms, but back in the late 1990s, he faced a job similar to the one Orr faces.

"My job was to essentially put in place a budget and financial plan that would bring the district back to solvency and ultimately financial recovery," Williams tells Gonyea.

He says financial accountability is key to turning around a city's social and governmental problems. It's also the key to public trust and the willingness of businesses and citizens to live in and invest in a community.

Williams says Orr has a tough job ahead, but that he needs to start taking baby steps immediately and "just start doing things."

"Show people that there is intelligent life, that the light's on and somebody is home," he says. "Putting in place a program that shows people that for the first time, maybe in a long time, there will be every year, not only a budget for the current year, but a financial plan for the out years."

Williams acknowledges Detroit's unique problems, but is confident that this is the right step for the city.

"[The] sense that the city has been victimized over years and years — some of it may be true, some may not be," he says, "[but] ... we have to avoid re-litigating the past and look toward the future."

And if there's one thing Detroiters are good at, it's hanging tough and looking to a better future.