Accessibility links
Where's George?: The Trail Of $1 Bills Across The U.S. For the last 15 years, a group of hobbyists has been tracking the movement of currency across the country. Self-named "Georgers" — after the president on the $1 bill — log the date, location and condition of bills they've encountered, and even spread the money by traveling across the country. 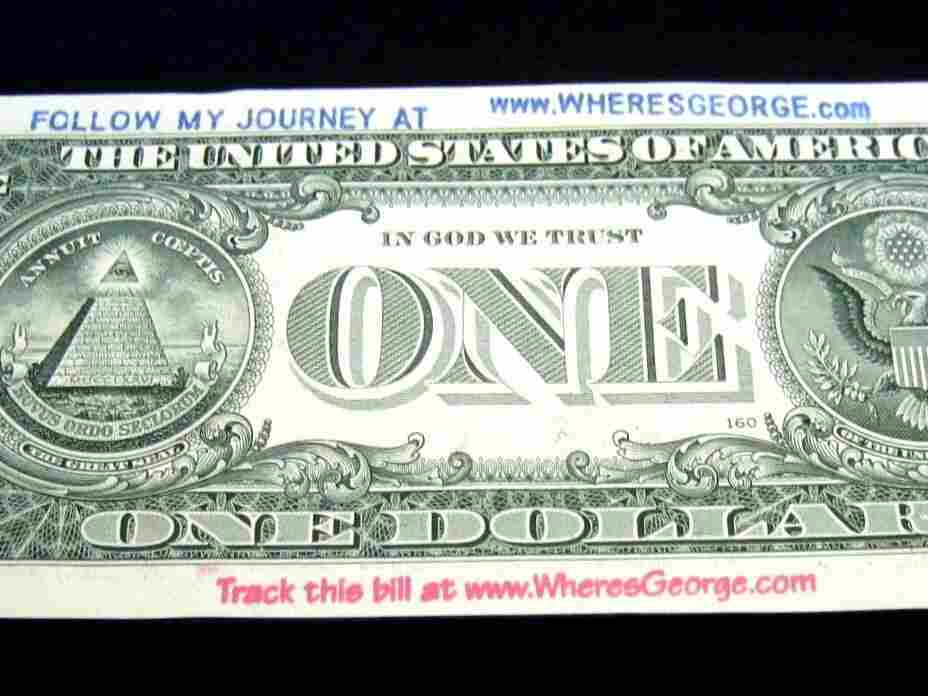 A group of hobbyists has been tracking the movement of stamped "Where's George?" $1 bills across the country. Prince Roy/Flickr hide caption 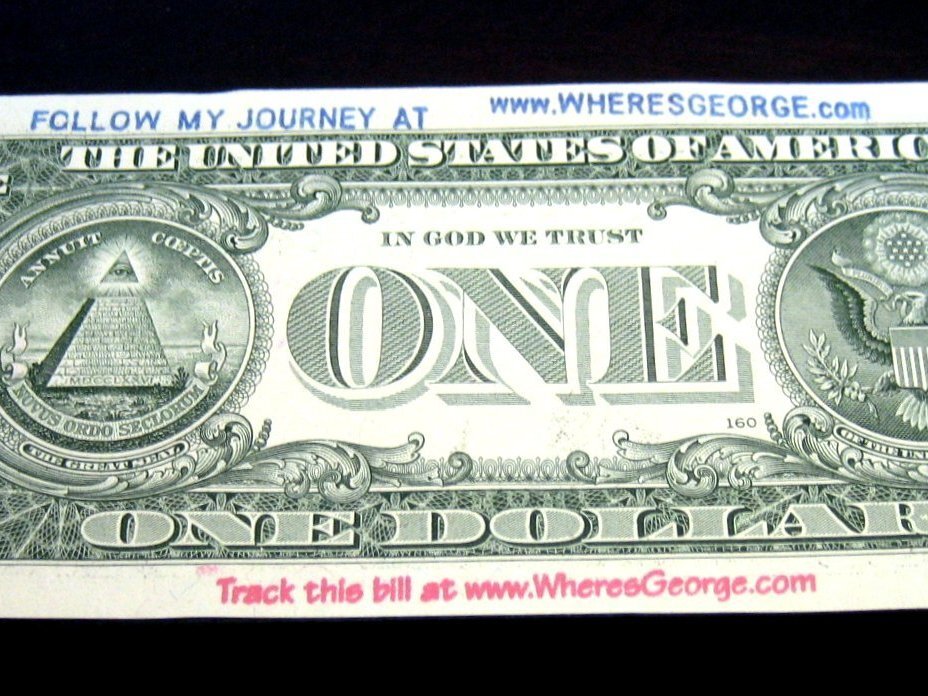 A group of hobbyists has been tracking the movement of stamped "Where's George?" $1 bills across the country.

When you hear the words "social network" you probably think of Facebook or Twitter. But years before either of those websites — when most of us weren't using the Internet at all — a smaller, stranger community was emerging around something called WheresGeorge.com, a 15-year-old subculture that's dedicated to the $1 bill.

At Kabooz's Bar and Grill at New York's Penn Station, Jennifer Fishinger is covering her table in stacks of ones. There are 500 $1 bills laid out.

At the next table over, David Henry has his stacks of cash in plastic bags. They're paper-clipped $1 bills in groups of 10. 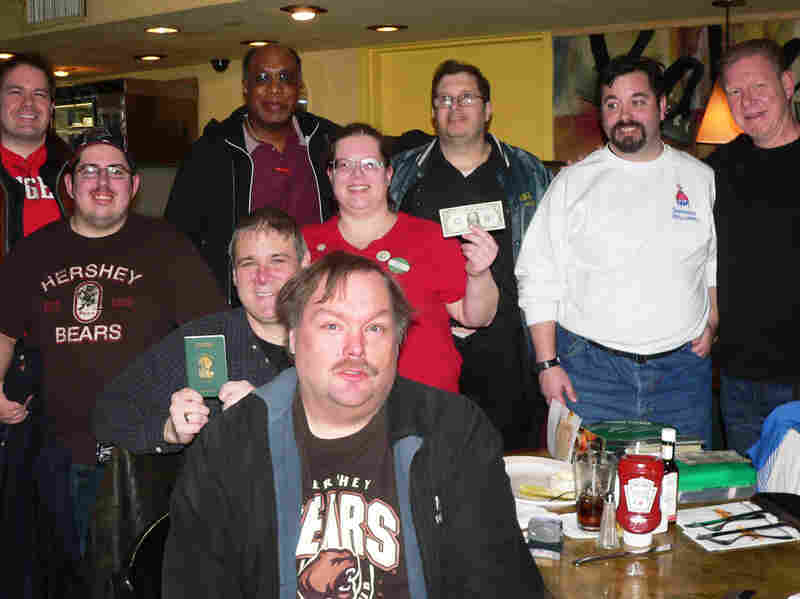 Avid users of wheresgeorge.com gather at Kabooz's Bar and Grill at New York's Penn Station to trade dollar bills and send off a group that's going on a cross-country train trip to Los Angeles. Stan Alcorn for NPR hide caption 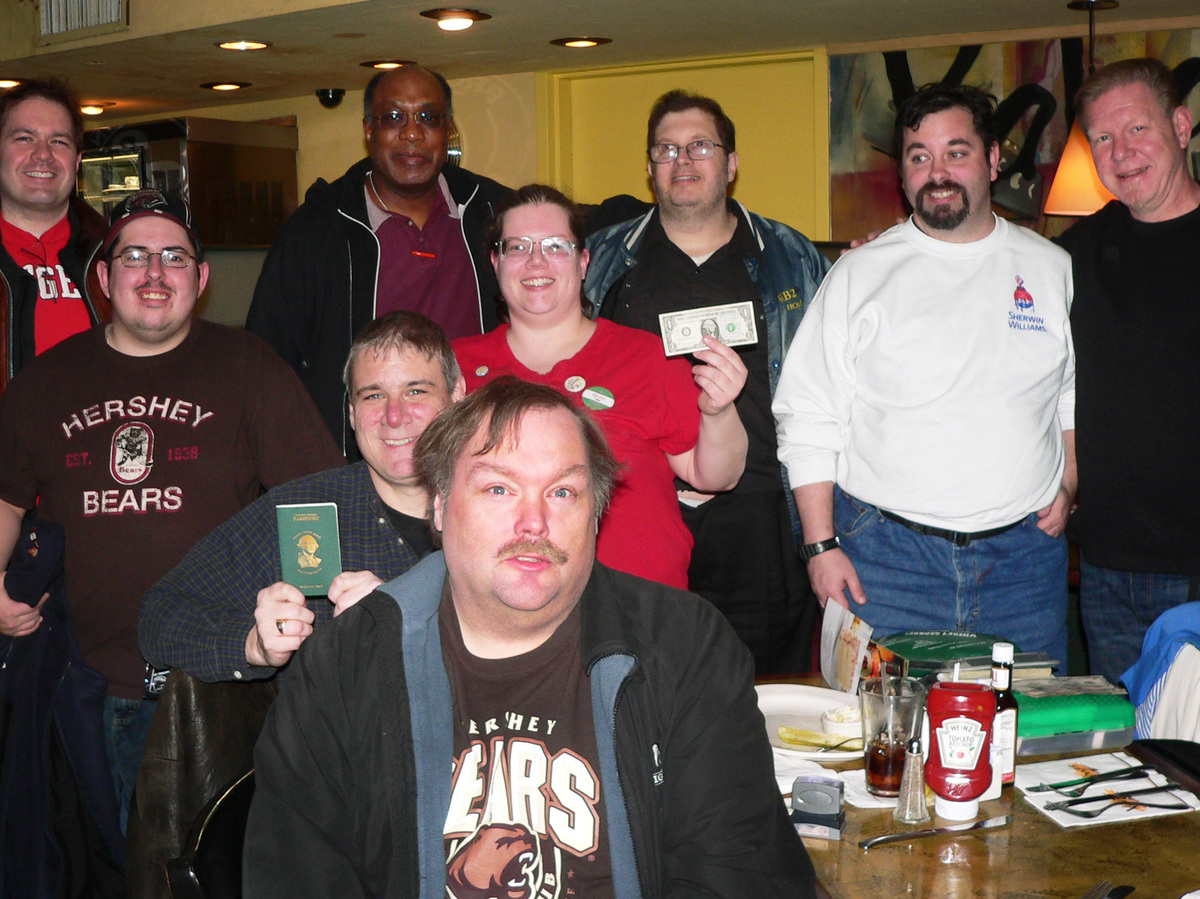 Avid users of wheresgeorge.com gather at Kabooz's Bar and Grill at New York's Penn Station to trade dollar bills and send off a group that's going on a cross-country train trip to Los Angeles.

For this group, it's all about the George Washingtons. Their dollars are stamped with messages like "currency tracking project" and "Track me at WheresGeorge.com." The website is the brainchild of Hank Eskin, a former tech consultant.

"I started the website in '98 as just a quirky idea. I didn't expect anything to happen," Eskin says. "I had no idea it would turn into a hobby or create this whole sensation."

It's called Georging. And typical Georgers log in religiously to enter their dollars' serial numbers and ZIP codes before they stamp and spend them. If one gets entered a second time, the Georger gets an email. That's called a "hit."

Robert Rothenberg was sitting at the table in Kabooz's when he got a hit in New Jersey. He gets a lot of hits, since he's entered nearly 100,000 bills into the website's database.

Part of the attraction for a segment of users, Eskin says, is the math and data.

"Getting a lot of bills out there, getting them into different states and counties, seeing where they hit and analyzing all the statistics and the distance and time and the ZIP codes — real-like gearheads," he says.

But it's not just gearhead Georgers who love the statistics.

"As a data set, it is very sexy," says Dirk Brockmann, a theoretical physicist at Northwestern University. He was studying human mobility when a cabinetmaker in Vermont told him about the website.

"I was like, 'Oh wow, this is amazing because it's data that goes down to the ZIP code scale in the U.S.,'" Brockmann says.

By analyzing the Where's George? data, he's tested theories about networks, modeled infectious diseases and mapped the flow of currency in the U.S.

"It turns out that what started as a — in quotes — 'silly game' did some massive science, it was like the first measurement of human mobility on this scale," he says.

And human mobility interests the individual Georgers, too. The gathering at Kabooz's is to send off a group going on a cross-country train trip from New York City to Los Angeles. Howard Weissman isn't traveling on this journey, but he has envelopes full of stamped bills to trade with the Geogers who are.

"I don't travel much nowadays," Weissman says. "This is one way for me to get my bills across the country. The bills do a lot more traveling than I do."

This is the wistful side of Georging and maybe of capitalism, too — your money always travels a little bit farther than you do.