Accessibility links
Former Bush Aide Pushes 'Conservative Case' For Gay Marriage Ken Mehlman, the political director for the George W. Bush White House, compares the right to marry to other fundamental rights conservatives embrace. He rounded up a group of 131 prominent Republicans to sign a legal brief that's at odds with the House GOP leadership and the party's platform. 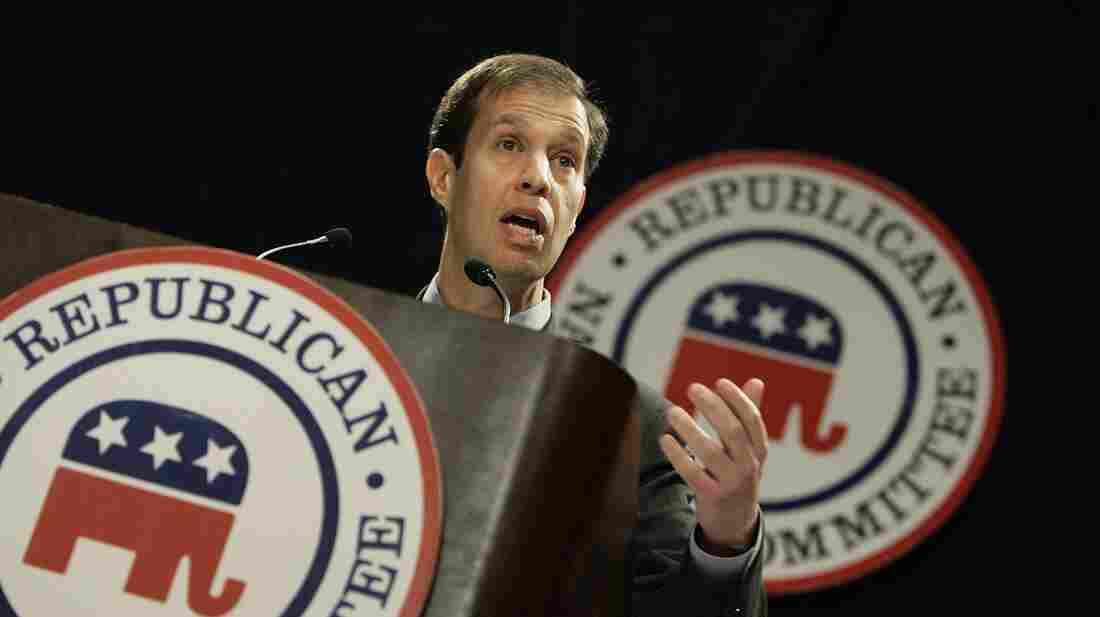 Ken Mehlman, then chairman of the Republican National Committee, speaks during a meeting at the Capitol Hilton in January 2006 in Washington, D.C. Chip Somodevilla/Getty Images hide caption 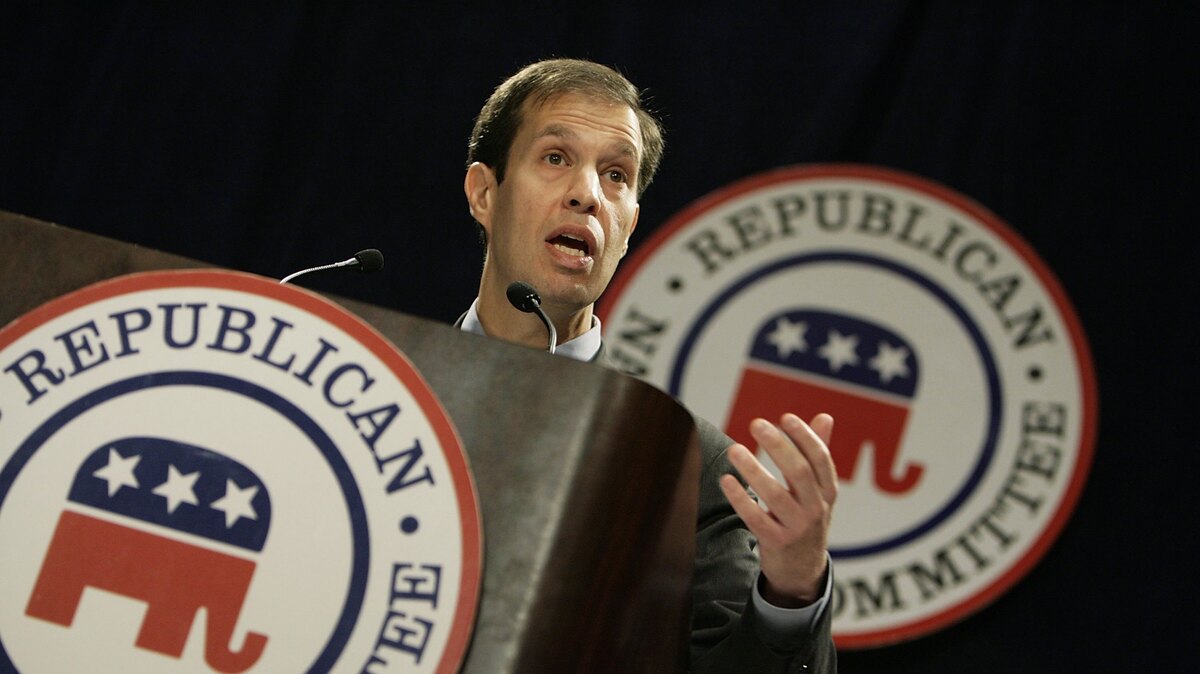 Ken Mehlman, then chairman of the Republican National Committee, speaks during a meeting at the Capitol Hilton in January 2006 in Washington, D.C.

One hundred thirty-one prominent Republicans have signed a pro-same-sex marriage legal brief that is clearly at odds with the House GOP leadership and the party's platform in the most recent election. Because of the prominence of the signers, the brief stands out among the more than 150 friend-of-the-court briefs filed in two same-sex marriage cases to be argued at the U.S. Supreme Court this week.

The man who rounded up the group is Ken Mehlman, the former political director for the George W. Bush White House.

For years, Mehlman forged a path as a Republican leader — chairman of the Republican National Committee and head of the 2004 Bush re-election campaign. And all the while he had a secret. In August 2010, he came out of the closet and is now arguably the most high-profile openly gay Republican in the country.

He has used his newfound openness to promote what he emphasizes is "the conservative case" for gay marriage. He says, "It's amazing what happens when you make the case in terms that people who are on the right side of the political aisle find familiar, with voices that they find familiar, and they realize that if you believe in freedom, if you believe in limited government, if you believe in family values, then allowing adults who love each other to form families is something that makes a lot of sense."

Mehlman, a lawyer and businessman, is no stranger to the Supreme Court. In fact, he helped get some of the conservative justices confirmed.

"I thought that it would be beneficial for the justices to hear those of us who are judicial conservatives explaining why, from our perspective, we saw Proposition 8 should be overturned," he says. Proposition 8 is the California ballot initiative that banned same-sex marriage.

Mehlman compares the right to marry to other fundamental rights conservatives embrace — for example, the right to bear arms and the right of corporate free speech embodied in the Supreme Court's controversial 2010 decision striking down the ban on corporate spending in candidate elections.

But what makes this brief different from others are the signers — an astonishing array of conservatives. Some have changed their minds about same-sex marriage — including former Utah governor and presidential candidate Jon Huntsman and Meg Whitman, who supported California's Proposition 8 when she ran for governor. Then there are the top policy officials from recent Republican administrations. Among them: former National Security Adviser Stephen Hadley, former Deputy Attorney General James Comey, former Commerce Secretary Carlos Gutierrez and former White House Chief of Staff Kenneth Duberstein, to name a few. In addition, there are top political strategists from recent GOP campaigns — like Steve Schmidt, who ran John McCain's 2008 presidential campaign.

Schmidt is among those who has had a change of heart on gay marriage. "In 2004 and 2000, I was not a supporter of marriage equality," he says. "But over time, as you talk to gay people and you understand the importance that your marriage has in your life, why would you ever want to deny anyone that?"

Schmidt concedes that some parts of the country are still firmly opposed to same-sex marriage, but he contends the numbers are "moving as fast as any social justice issue has ever moved in the United States." And he says that the reason for that change is, in part, that a clear majority of younger people support the legalization of same-sex marriage.

Alex Lundry, 35, who was director of data science for Republican Mitt Romney's presidential campaign and who also signed the Mehlman brief, is representative of that younger generation. Like most in his age group, he has always supported gay marriage. "For me, I think it's kind of a no-brainer that if you believe in freedom, then you should believe that gays and lesbians have the right to get married."

The divide over same-sex marriage is at "an incredible inflection point in the party," says Lundry, and it shows that "there's some real soul-searching" going on over what it means to be a conservative.

You can't change the past, but you can try to, as much as you can going forward, be helpful and be constructive.

Pulling together such a wide-ranging group of people is never as easy as it looks. Another brief signed by 278 corporations urging the court to recognize same-sex marriage as a fundamental right was a heavy lift, according to some who were involved in the process. And like that brief, the Mehlman brief is the product of hundreds of long conversations — and many rejections, too.

For Mehlman, though, the brief is a particular triumph. He is clearly embarrassed about the role he played in the 2004 presidential campaign, when the GOP aggressively moved to put bans on same-sex marriage on many state ballots in order to bring out the conservative base. And he has repeatedly apologized to gay rights activists.

"You can't change the past," he says, "but you can try to, as much as you can going forward, be helpful and be constructive."

It is hard not to see his passionate advocacy now as some measure of atonement for the part he played in 2004 and now regrets.

Mehlman credits another long-time conservative, Ted Olson, with helping him to speak out. Olson achieved conservative rock star status when he won the landmark 2000 case of Bush v. Gore, putting George W. Bush in the White House. He would go on to serve as the Bush administration's chief legal advocate in the Supreme Court.

But in 2009, back in private practice, Olson filed the lawsuit challenging California's ban on same-sex marriage — the case he will argue in the Supreme Court on Tuesday.

Mehlman calls Olson his "nightingale" because the nightingale "only sings when it hears other nightingales sing." You never hear just one nightingale singing, Mehlman observes. "You'll always have a group of them," and when Olson made the case for same-sex marriage, "a whole lot of folks, myself and others included" listened to that song and got the courage to repeat it.