Accessibility links
In Teen AIDS Activist's Hometown, Old Tensions Remain Kokomo, Ind., was deeply split in the 1980s by teenager Ryan White's AIDS diagnosis and a battle over his right to attend school. An oral history project finds that the topic still hits a raw nerve in the community more than 25 years later. 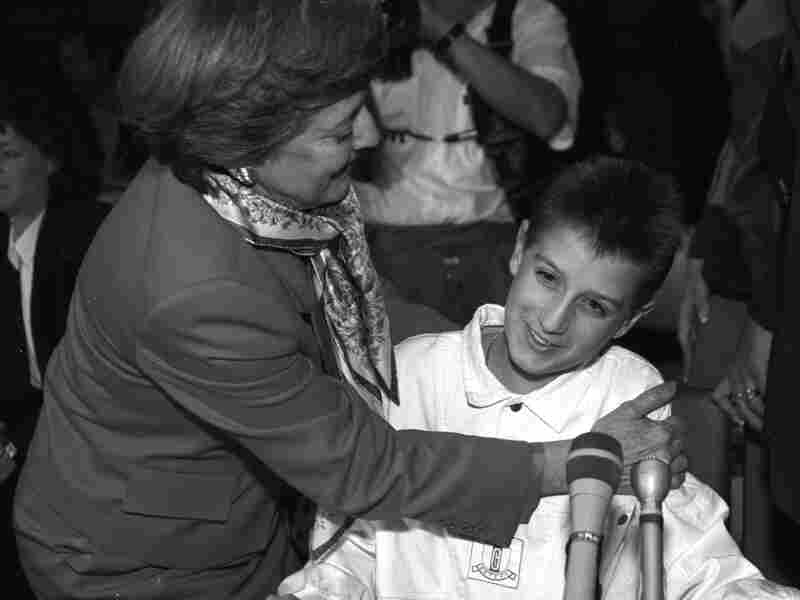 Ryan White gets a hug from Dr. Cory SerVaas after testifying to a presidential commission on AIDS in 1988. He told the panel of his battle with the disease and the taunts and jeers he endured from classmates. Nanine Hartzenbusch/Reuters/Landov hide caption 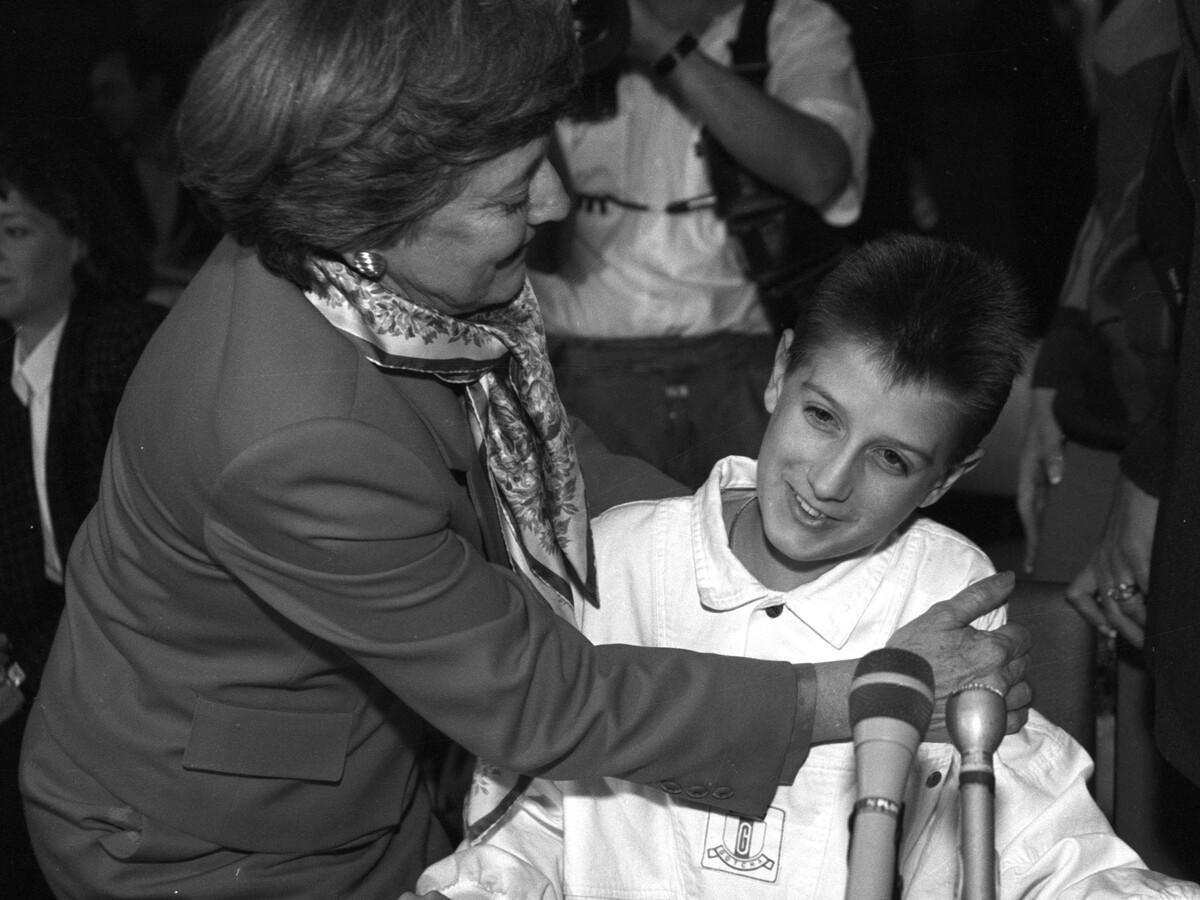 Ryan White gets a hug from Dr. Cory SerVaas after testifying to a presidential commission on AIDS in 1988. He told the panel of his battle with the disease and the taunts and jeers he endured from classmates.

An oral history project that checks in on the Indiana town split in the 1980s by teenager Ryan White's AIDS diagnosis is finding that the topic still hits a raw nerve.

More than 25 years ago, Kokomo, Ind., was reluctantly thrown into the national spotlight when resident White, then 13, was barred from going to school after getting AIDS from a tainted blood transfusion. The decision to keep White out of school sparked national outrage and quickly divided this community.

"I remember it was quite an emotional situation, going in to tell this young man that he had AIDS. [Dr. Martin Kleiman, White's physician] was such a gifted and qualified man and did it in such a wonderful and caring way," says Harold Williams, White's pastor who was there the day the boy was diagnosed.

Williams was interviewed along with 21 others including doctors, teachers and school administrators involved in the Ryan White case.

The historical society conducting the project wanted to get a first-hand look at how Kokomo dealt with the controversy, but what it found was that the controversy itself isn't over. Howard County Historical Society curator Stew Lauterbach says the project was divisive even before it began.

"One gentleman just came up and he said, 'You can't do this. You just can't. The community's not ready for it. It will just tear up our community if you do this project,' " Lauterbach says.

In an interview for the project, Beth Ashcraft, who was a nurse at White's school, recalls going to Florida for spring break and telling someone she was from Kokomo.

"They said, 'Where are you from?' And I said, 'Kokomo, Indiana.' And she said, 'You're from that horrible town where they're mistreating this child with AIDS' and just went on and on and on," Ashcraft says. "Well, I certainly wasn't going to tell her I was the school nurse."

Ashcraft says her memories are still hauntingly vivid even so many years later, and it's a part of her life she would rather forget.

A number of those interviewed say those from outside Kokomo demonized residents here.

One gentleman just came up and he said, You can't do this. You just can't. The community's not ready for it. It will just tear up our community if you do this project.

"So little was known about AIDS at that time that I think now, with what people know, they don't really want to talk about it because I don't think he was probably treated in a way that they would treat somebody now," Parry says. "There are a lot of things about the community that we like to talk about, and some things you just don't talk about, maybe because you're not proud of how it all went down."

This oral history project certainly has people here talking. Some comments on the local newspaper's website urge residents who kept Ryan from going to school to own up to their actions.

"Kokomo showed hatred, intolerance and IGNORANCE. You can't educate grown adults on a disease they wished to learn nothing about even from doctors."

In a red brick Victorian building that houses the historical society, Lauterbach is looking at cardboard boxes stuffed with hours of audio interviews. He says he wants to put them on display if he can get the resources to do so. He knows that will likely stir up the controversy once again.

"I think there's still a lot of people that are very upset with it. I don't know that the community is really ready to deal with it. I guess we hope that by doing the project and getting some publicity on the project we can open some doors for some communication, some healing and some reconciliation," Lauterbach says.

He says he can only guess how long that will take but says the first step toward healing is for Kokomo residents to talk about Ryan White, who died five years after his diagnosis, and the lasting mark his case left on their town.