Accessibility links
In First Of 2 Gay-Marriage Cases, Court Turns To Proposition 8 The justices on Tuesday hear a case that stems from a constitutional challenge to the California ban on same-sex marriage that was enacted by voter initiative in 2008. And on Wednesday, the court hears a challenge to the federal law that bars the U.S. government from recognizing gay marriages.

In First Of 2 Gay-Marriage Cases, Court Turns To Proposition 8 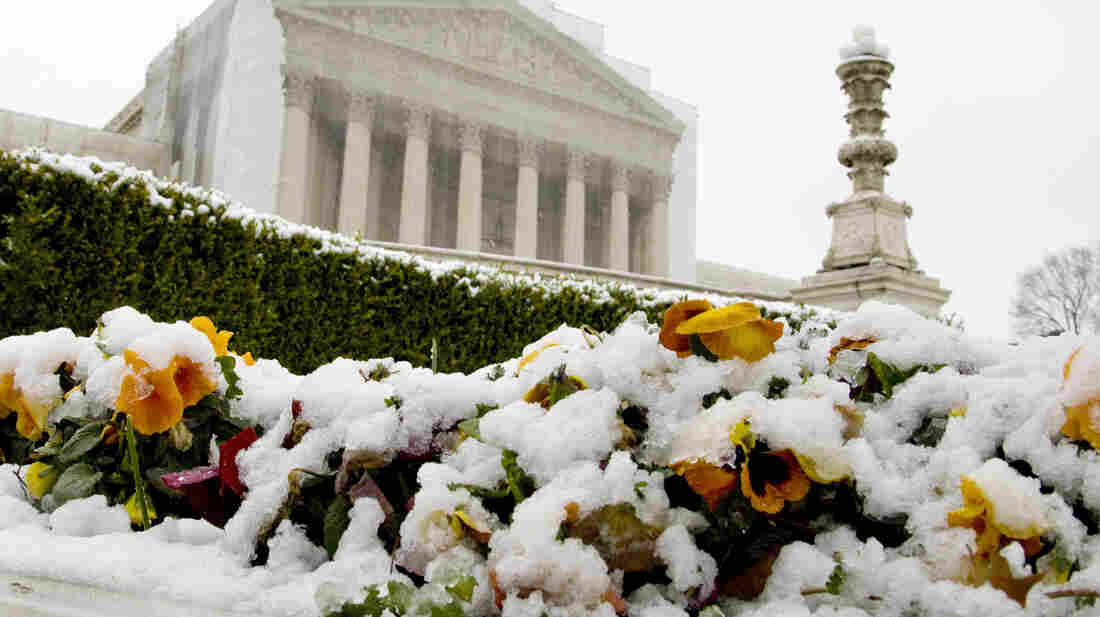 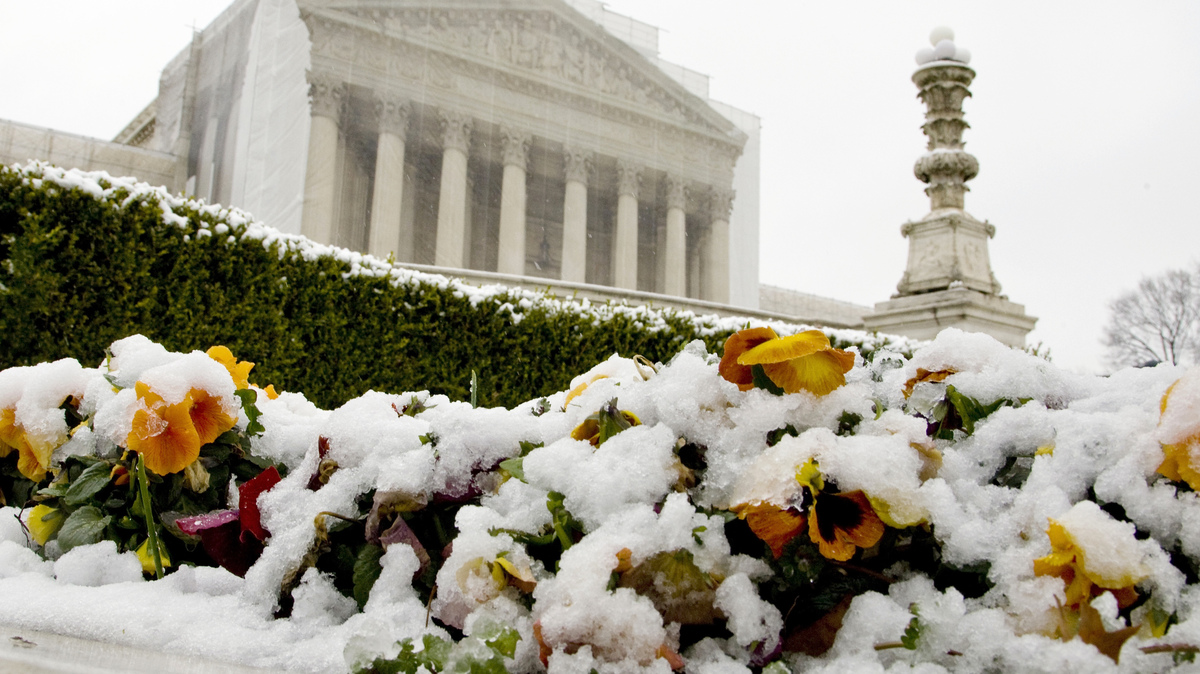 Snow covers flowers in front of the Supreme Court building on Monday in Washington, D.C. On Tuesday, the justices hear oral arguments on the constitutionality of California's Proposition 8, which banned gay marriage.

Outside the Supreme Court, lines began forming nearly a week ago. By Monday, the line had snaked down the court steps and to the corner, with people braving freezing temperatures and snow in anticipation of the historic arguments on same-sex marriage on Tuesday and Wednesday.

The justices are first hearing a constitutional challenge to California's ban on same-sex marriage. A second day is devoted to the federal Defense of Marriage Act, which denies federal benefits to same-sex couples married in the nine states where such unions are legal.

The two cases fall into the category of the truly momentous. So much so that Supreme Court advocate Tom Goldstein literally pounded the table when speaking to law students last month. "This is special," he declared, observing that there were no cases like it when he was in law school." This will be a "foundational decision" that "is going to be decided for centuries."

On one side of the argument in these cases is the idea of equality. On the other, traditional notions of how society has ordered itself.

The same-sex-marriage cases come in the face of a shift in public opinion that even opponents of same-sex marriage admit is unprecedented. Polls show that support for gay marriage has jumped from percentages in the low 40s just four years ago to majorities now as high as 58 percent. And 13 other countries, from Canada to Argentina, have legalized same-sex marriage.

California's Proposition 8, known simply as Prop 8, was enacted by voter initiative in 2008 to ban same-sex marriage. Challenging the constitutionality of the ban are Kristin Perry and Sandy Stier. They have been together 13 years and raised four boys — Perry's twins, and Stier's two sons from a heterosexual marriage many years ago.

Perry, a children's advocate, and Stier, a technical systems expert, got married in 2004, when same-sex marriage was briefly legalized in San Francisco, but the marriage was later voided by the state courts.

They contend that California's ban on same-sex marriage amounts to a badge of inferiority, a stigmatizing mark on all gay couples. "There is no more important decision as an adult than who you choose to love and build a family with," Perry says. "And I'm not allowed to enter into that institution simply because of the gender of who I love — not because I've done anything illegal, not because I'm not contributing, not because I've done anything other than end up this way."

Perry says that Proposition 8 not only hurts her; it hurts her parents, her kids and her community.

The sponsors of the proposition declined to be interviewed for this piece, as did their lead lawyer, Charles Cooper. But in briefs filed in the case, Cooper defends the constitutionality of Proposition 8 this way: "Marriage owes its existence to the undeniable biological reality that opposite-sex unions — and only such unions — can produce children."

Society, he says, has no interest in regulating other relationships, no matter how close. Cooper told a federal appeals court during oral arguments that "the name of marriage is effectively the institution, and the issue here is whether it will be redefined, essentially to be genderless in that it bears little or no ... relationship to the traditional historic purpose of marriage."

Rebutting that argument in the Supreme Court Tuesday, lawyer Ted Olson will tell the justices that "the ability or willingness to procreate or the interest in having children sexually has never, ever been a condition for entry into marriage anywhere in this country."

Olson, who represents Perry and the other challengers to Proposition 8, notes that people too old to have children, or who don't want to have children, have a constitutional right to marry. Even people in prison have a right to marry. And yet, as he puts it, "The state of California is saying you can marry whoever you want, provided it must be a person of the opposite sex."

Those defending Proposition 8 point out that the citizens of California have twice, since 2000, voted to ban same-sex marriage. "We are claiming that the Supreme Court should not try to remove the decision on the future of marriage from the hands of the people, that the people are sovereign, that they do have a right to maintain marriage as one man and one woman," says Austin Nimocks, counsel for the Alliance Defending Freedom, one of the groups involved in defending Proposition 8.

Olson replies that the 14th Amendment of the Constitution stands in the way of that argument because it guarantees all citizens equal protection of the law. It was "specifically enacted as a check on the power of the states," Olson observes, "whether exercised by the people directly, as in Proposition 8, or by a state legislature."

Nimocks sees no denial of equal protection because same-sex couples have all the same legal rights as married couples under California's domestic partnership law. But Olson dismisses that argument, asserting that it is analogous to telling African-Americans they should use separate drinking fountains or go to separate schools. Marriage, he says, "occupies a special place in American society." Couples don't "invite their friends and throw rice and flowers and scream with joy" when they are joined in domestic partnership.

For Proposition 8 proponents, the real heart of the argument is the notion of marriage as a mechanism to ensure that those who create children are responsible for them. As Nimocks puts it, "The government doesn't care if you love your spouse," but, "It's in society's best interest to provide a vehicle to attach those children to the mother and father that are responsible for their creation."

"Same-sex relationships historically, as compared to opposite-sex relationships, are not as stable," he adds. "It's one thing for a kid to not have a dad or not have a mom through the circumstances of life," but it's quite another "to intentionally deprive a child of a mom and a dad, and that's the debate that's going on, whether that's a good and healthy thing that we as a society should embrace."

Olson disputes every aspect of that argument, contending that the Supreme Court has never ruled that procreation is the fundamental basis for marriage. He also points to the testimony of the principal expert witness for Proposition 8, who "conceded at trial" that children in gay and lesbian families "would be better off if their parents were allowed to get married."

The legal case to be argued Tuesday, however, is focused on what justifications, if any, the state of California has for banning same-sex marriage.

Olson argues that even under the most lenient standard — what is known as the rational basis test — the state cannot justify the ban.

Under the rational basis test, a law is upheld if there is a rational reason for it. Proposition 8 lawyer Cooper told the lower court that under the rational basis test, the ban on same-sex marriage should be upheld unless "this court concludes that there is nothing to say in favor of the definition of marriage that has prevailed in this country and in all places" essentially since "time immemorial."

Olson replies that none of the offered justifications for Proposition 8 hold water — not family, not kids, not the institution of marriage. No one, he says, has come up with any reason why same-sex marriage "damages heterosexual marriages in any way."

Ultimately, he says, it is no justification to say the country has been doing something for hundreds of years, if it flies in the face of the constitutional guarantee of equal protection of the law.

The threshold question for the justices, however, is whether there should be any case at all, whether there is any dispute between the state and those challenging the law. California not only refuses to defend Proposition 8 in court but has filed a brief contending that the sponsors of the law have no legal standing to appeal the lower court decisions that invalidated the law. And if the Supreme Court were to agree, the lower court decision would stand, and Proposition 8 would exist no longer.

The court has many other options to choose from in deciding this case. Among the choices: It could uphold Proposition 8 as a valid exercise of the democratic process. It could strike down Proposition 8 in a way that could invalidate similar bans in 31 other states. Or it could rule in a manner that invalidates only California's law.

A decision is expected by the end of June.