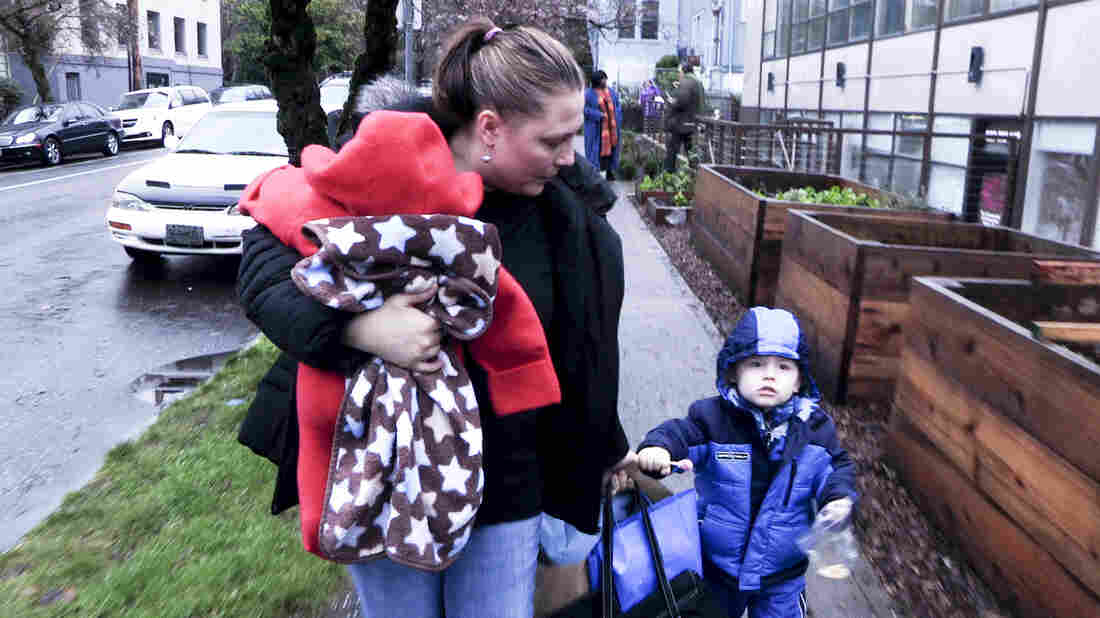 It's a visual no parent wants to picture: a child describing what it's like to live in a house with no power for lights, heat or cooking. For many middle-class American parents, it's hard to imagine their family ever facing a situation like that. But a new HBO documentary suggests that many seemingly prosperous parents are only a few misfortunes away from dark houses and empty refrigerators.

The film, American Winter, follows the personal stories of eight middle-class families in Portland, Ore., who were hit hard during the Great Recession. Once financially stable, they now find themselves struggling. Emmy Award-winning filmmakers Joe and Harry Gantz — known for their tell-all series Taxicab Confessions — show these families desperately trying to make ends meet during the winter of 2011, even as headlines everywhere indicate a recovery for America.

More On Poverty In America

Diedre Melson, John Cox and Pam Thatcher are three of the parents featured in the film. All three are college-educated and at one point considered themselves middle class, a group the film refers to as the most endangered species in America.

Melson, Cox and Thatcher live in different neighborhoods, mingle in different circles and have different backgrounds. But in 2011 they all had one thing in common: Their financial struggle brought them to Portland's 211info emergency hotline.

"My husband, Brandon, went out to look for work, and I was stressing because I had very little diapers; I was worried about formula," Thatcher tells NPR. She is married with two young boys, and it was the first time she had found herself in need of assistance. "I went ahead and called [211info] and I was actually looking for help with rent or utilities."

For Cox, a housing crisis is what led him to seek help. American Winter shows him struggling to control his emotions when he has to ask his father for help paying the bills. Before he was laid off three years ago, Cox was an accountant who earned a nearly $60,000 salary. He had never really thought about social services or public assistance.

"I had a little bit of compassion for the folks [who rely on social services], but I never thought it would happen to me," he says. "In fact I was so oblivious to it, I didn't know how to go about getting the assistance."

As for Melson, she sometimes donated her plasma and often spent weekends picking up scrap metal to make ends meet.

In American Winter, all three of these parents express a sense of shame at ending up in their current situation. "There's a stigma attached to people who ask for assistance," Melson explains. "People have the tendency to believe that there was something that you did to make yourself get in that situation and now you're begging, when in all actuality I don't think any of us here did anything particular to get into our situations. I think all of it was based on each of us basically losing our source of income."

More On The American Middle Class

How The Poor, The Middle Class And The Rich Spend Their Money

Stuck In The Middle (Class) With You

Thatcher describes a different kind of stigma she felt during a trip to a church assistance center. She says people were talking about her wedding ring and her kids' clothing, suggesting that she was doing fine and didn't really need any help. "They sat right next to me and they were saying it as a normal conversation, as you and I are," she says. "And it killed me. It's already hard; it is already degrading. And for someone to sit there in a casual conversation and talk bad about you, it hurt me so much more."

But public shame wasn't the only source of pain for these unexpectedly impoverished parents. The sting of being unable to afford things for their children was particularly harsh: At one point in the film, Melson is shown talking with her son about a wrestling tournament he was invited to. It's a national competition in Nevada — and it costs $500.

"Unfortunately, he was not able to make it," Melson tells NPR. "And that has to be one of the hardest things as a parent, is to not to be able to provide those things for your child. A once-in-a-lifetime opportunity has gone by because you can't afford it. You feel like a failure."

Thatcher felt a similar sense of shortcoming around the holidays. "I know that we didn't have a Christmas," she says. "I know that I couldn't buy one gift. That was one Christmas that you can't buy your children anything, and that hurts so bad."

With so much shame surrounding their situations, some might wonder why American Winter's families agreed to be filmed.

"This is hard," Cox says, "but we're not doing this just for us. This is not happening just in Portland or just in Houston or just in Philadelphia. This is happening nationwide. And a lot of people think it's just them."

Melson adds that she wants people to talk about their struggles "especially if it's happening to them. We want them to become a community and to feel OK looking for help. Nobody asked to have this happen to them."

Some of the parents are in better financial situations now than they were when the film was shot, but that doesn't mean they have regained their spot in the middle class. Cox, for instance, has managed not to lose his home to foreclosure — yet.

"We're still in the house," he says. "But right now I'm in limbo. I don't know where I'm going to be in 30 days. I've never considered it my house; I've always considered it my kid's house. Geral has Down syndrome, and I know I have to do something for him for when I'm not around, you know, when he gets older. And I gotta do things to make his life more comfortable. And I sit and worry about my kid. What's going to happen to him in 30 years when I'm not around? That is an absolute scary thought for me."

Melson and Thatcher murmur their agreement.

"It's really demoralizing," Cox says, "even though I still have the ability to, more or less, you know, keep my head up and think, 'Well, tomorrow's another day.' "