Accessibility links
Knox Or Not: Plenty Of Cases Are Tried Without A Defendant Amanda Knox may face a retrial for murder in Italy, but it would very likely be conducted without her. The legal mechanisms that allow for in absentia trials are common practice in courts around the world. 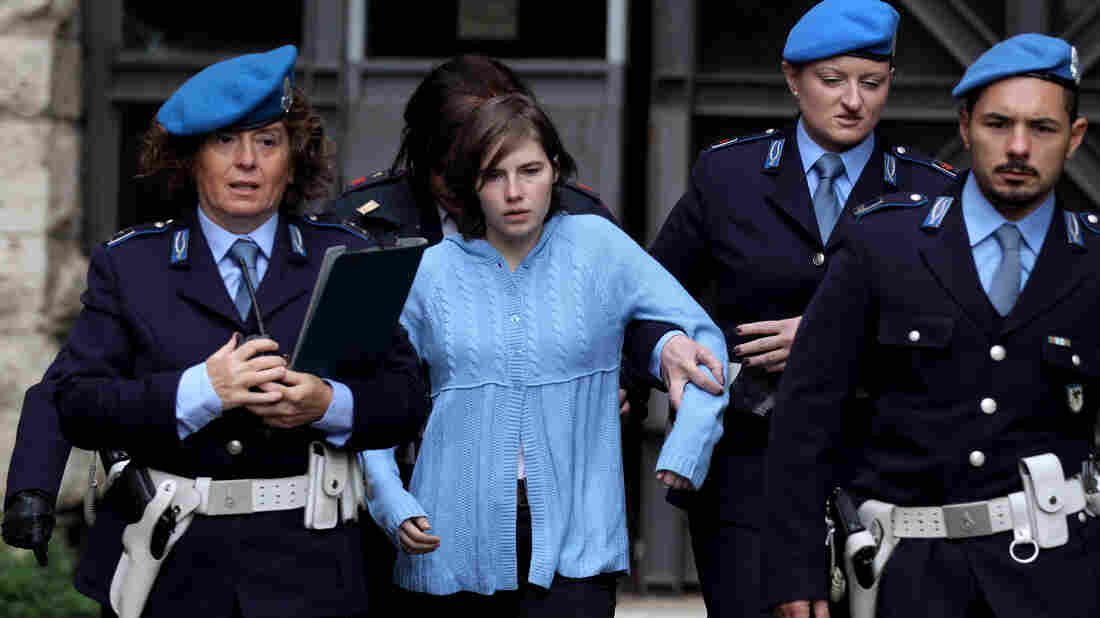 Amanda Knox is led away from an appeals court in Perugia, Italy, in November 2010. Her murder conviction in the death of a flatmate was ultimately overturned, but now, Italy's highest court has ruled she must be retried. Oli Scarff/Getty Images hide caption 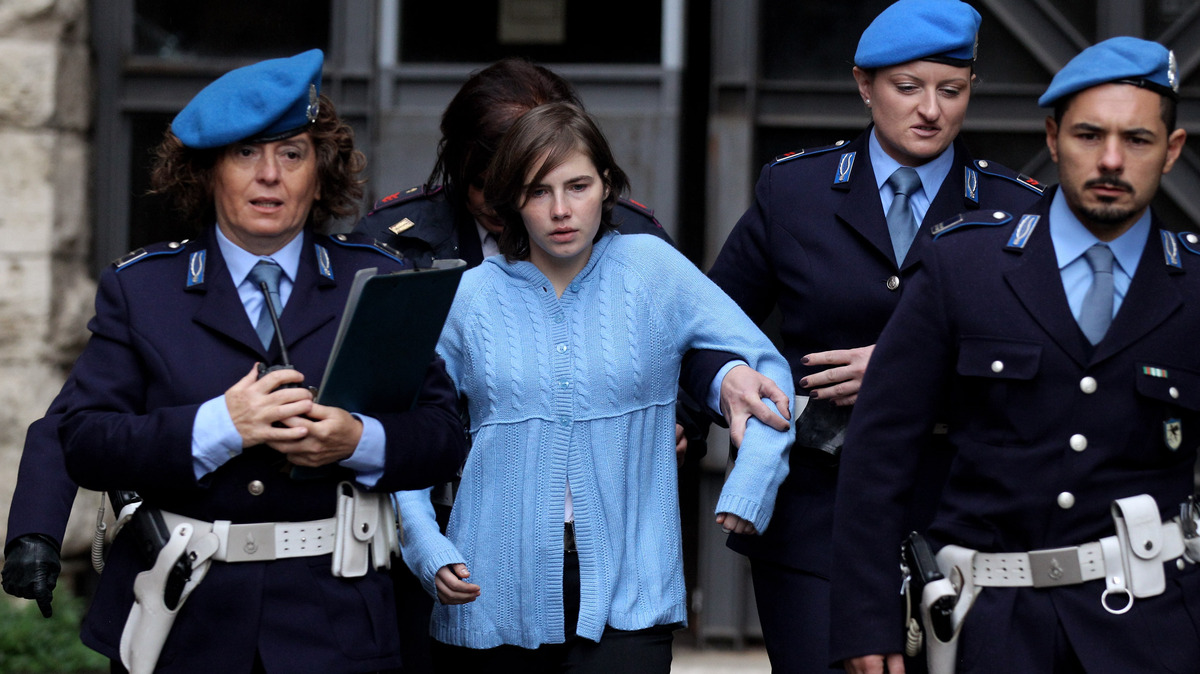 Amanda Knox is led away from an appeals court in Perugia, Italy, in November 2010. Her murder conviction in the death of a flatmate was ultimately overturned, but now, Italy's highest court has ruled she must be retried.

Amanda Knox may never again set foot in Italy. But that doesn't mean she won't face another trial there.

Courts around the world — particularly in Italy — have shown themselves willing to try people in absentia.

On Tuesday, Italy's top court ordered that Knox be retried on murder charges. Last month, an appeals court in Milan convicted a former CIA station chief and two other Americans of kidnapping an Egyptian cleric during an extraordinary rendition. Twenty-three other Americans involved in the case were convicted in absentia in 2009.

"It's common practice, not only in Europe," says Kurt Volker, a former U.S. ambassador to NATO who now runs an institute on international leadership at Arizona State University. "It's done when the defendant is not physically at hand, yet the legal outcome can be pursued."

The Trial Of George W. Bush

Trials or even convictions in absentia don't mean the accused will ever serve time. In fact, one reason prosecutors might seek charges against defendants who don't appear is the difficulty involved in extraditing them, says Michelle Martinez Campbell, a former federal prosecutor.

"In my experience in extraditing people from other countries, it would take years — literally, years — just to go through the extradition proceedings," says Martinez Campbell, who now teaches law at the University of Vermont.

Prosecutors may be worried that delays could mean witnesses might die before a trial could be held or that evidence would be lost, she says. Better to have a conviction in hand than simply wait.

Trials held in absentia also may be conducted for political reasons, says Christopher Jenks, a former attorney with the Pentagon and State Department. Last year, for example, President George W. Bush and several members of his administration were convicted of war crimes in absentia in the Malaysian capital of Kuala Lumpur.

In January, a tribunal in Bangladesh sentenced cleric Abul Kalam Azad to death in absentia for crimes against humanity during that country's 1971 war for independence.

Such proceedings are illegal in the U.S. The Supreme Court declared 20 years ago that defendants could not be prosecuted unless they were present at the beginning of their trials. There are rules in federal criminal procedure that allow trials to proceed without the defendant remaining present, but the practice is seldom employed.

And the treaty that created the International Criminal Court states that "the accused shall be present during the trial."

But a U.N.-backed court charged with prosecuting the killers of former Lebanese Prime Minister Rafik Hariri and more than 20 others in 2005 has determined it can try people in absentia, citing as precedent the Nuremberg trial of Nazi leader Martin Bormann.

Some European countries, such as Germany, have largely stopped conducting trials in absentia, Jenks says, because of the difficulty in proving that the accused was aware and chose not to be present.

"While allowed, they're in essence more trouble than they're worth," says Jenks, now a law professor at Southern Methodist University. "In the vast majority of cases, you'd have to retry the person, if and when you find them."

In parts of Europe, in absentia trials essentially give defendants the ability to appeal twice — asking for a retrial at which they would be present and then potentially appealing the second verdict, says Pieter Cleppe, who heads the Brussels office of the think tank Open Europe.

"There are some guarantees in the legal system that make sure that it's fair, that the rights of the defense are not being violated, while still making sure that justice is being done," Cleppe says.

He notes that European Union rules have been changed in recent years to make it easier to force extradition of serious criminals, even those who have been tried in absentia.

"In absentia judgments are common," Cleppe says. "You can criticize that, but it's quite common."

It Cuts Both Ways

Italy has a treaty with the U.S. that calls for extradition in cases where criminal penalties of at least one year would apply in both countries — which clearly pertains in a murder case. If Italy requests a provisional arrest warrant in the Knox case, a prosecutor from the Justice Department's Office of International Affairs would be assigned to the matter.

That doesn't mean someone will be showing up at Knox's door with a warrant anytime soon, though.

"By letting her go back to the U.S., it almost seemed at the time like a declaration that they didn't think this was going to happen, because it becomes so hard to extradite someone back," Martinez Campbell says.

But Italian officials may not like it when their own citizens are sent to other countries to face trial.