Accessibility links
DOMA Challenge Tests Federal Definition Of Marriage The Supreme Court hears arguments Wednesday on the constitutionality of the Defense of Marriage Act, which denies federal recognition and benefits for same-sex couples. The case involves a woman charged a hefty estate tax when her spouse died, which she would not have owed if her spouse had been a man. 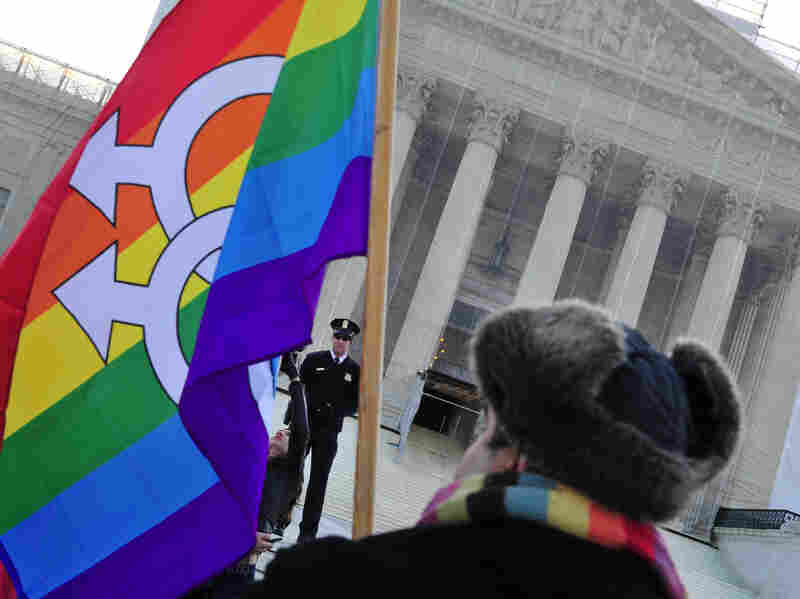 A pro-gay-marriage protester stands in front of the Supreme Court on Tuesday, the first of two days of oral arguments on challenges to laws that limit the definition of marriage to unions of a man and a woman. Karen Bleier/AFP/Getty Images hide caption 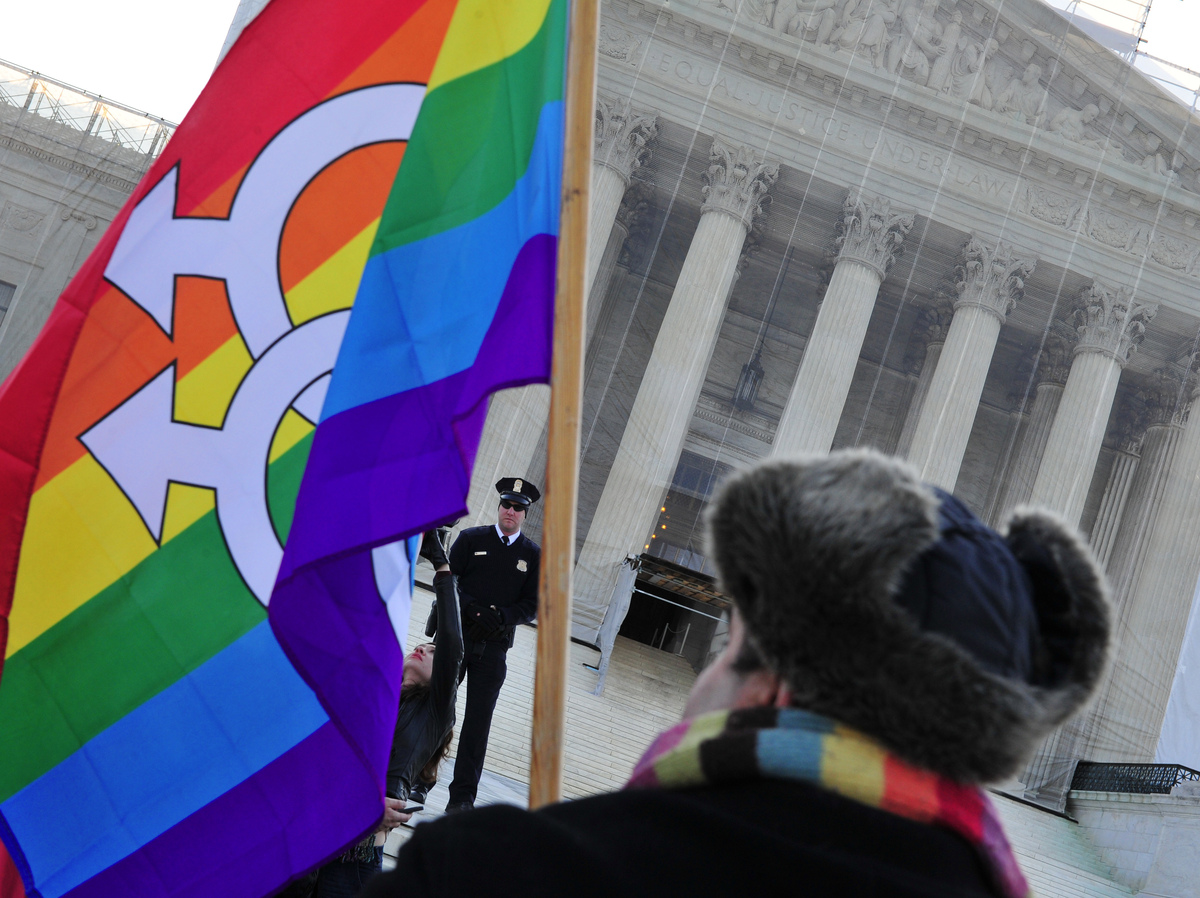 A pro-gay-marriage protester stands in front of the Supreme Court on Tuesday, the first of two days of oral arguments on challenges to laws that limit the definition of marriage to unions of a man and a woman.

After weeks and months of public debate and speculation about the legal fate of same-sex marriage, the second round of arguments takes place at the U.S. Supreme Court on Wednesday.

After hearing a challenge on Tuesday to California's ban on same-sex marriage, the justices move Wednesday to the 1996 Defense of Marriage Act, known as DOMA. The law bars federal recognition and benefits for same-sex couples married in any of the states — and there are nine currently — where such unions are legal.

There are more than 1,000 federal laws that confer benefits of one sort or another on married couples — everything from tax savings to Social Security benefits, but DOMA excludes those benefits for legally married same-sex couples.

The test case involves a couple from New York, Edith Windsor and Thea Spyer, who had been together for 42 years prior to their marriage in 2007. When Spyer died, however, the federal government, acting under DOMA, required Windsor to pay $363,000 in estate taxes that she would not have owed if her spouse had been of the opposite sex.

"If Thea had been Theo, I would not have had to pay those taxes," says Windsor. "It's just a terrible injustice and I don't expect that from my country. I think it's a mistake that has to get corrected."

At the Supreme Court on Wednesday, Windsor's lawyer, Roberta Kaplan, will tell the justices that the federal government, throughout the nation's history, has always deferred to state definitions of marriage, because regulating marriage is a state function. But because of DOMA, that traditional deference to the states doesn't exist for same-sex couples. Edie Windsor's marriage, recognized as legally valid by the state of New York, is not recognized by the federal government.

And that, Kaplan argues, creates a "second-class citizenship, or at least second-class marriages, that the Equal Protection Clause of the Constitution forbids."

The 14th Amendment guarantees all citizens equal protection of the law, and Kaplan will argue that the government has to have "a good reason" for distinguishing between gay and straight couples. Contending that DOMA supporters have been unable to justify treating legally married gay couples differently, she argues that it is unconstitutional to "allow straight married couples to have all the benefits of federal law and gay couples to have none."

Votes May Be There To Strike Down DOMA, But There's A Big 'If'

Normally, the federal government defends all acts of Congress, but the Obama administration, in a rare move, has declined to defend DOMA in court and instead is siding with those challenging the law.

The House Republican leadership has stepped in to defend the statute, hiring former Bush administration Solicitor General Paul Clement to do the job. About half of the oral argument will focus on whether Congress has legal standing to defend the law in court. And because the administration agrees with Congress that it does have standing, the Supreme Court has appointed a private lawyer to argue that Congress does not.

Those defending DOMA have been strangely unwilling to make their arguments outside of the court. House Speaker John Boehner, R-Ohio, declined to be interviewed for this article, as did Clement and leading House members who voted for the law. Even Sen. Orrin Hatch, R-Utah, who filed a friend of the court brief supporting DOMA, was unavailable for an interview. The primary sponsor of the bill, former Rep. Bob Barr, R-Ga., now retired, has changed his mind and now opposes the law. President Clinton, who signed DOMA into law, has also reversed course.

Rep. Steve King, R-Iowa, however, is an outspoken DOMA supporter. Equal protection, he says, means "equal protection for a man and woman to be able to get married to each other," because "that's been the definition of marriage for thousands of years."

And as for Edie Windsor: She simply "wasn't married in the eyes of the United States Congress, according to DOMA." Under our system of federal and state shared power, King says, states are free to recognize same-sex marriages, and the federal government is free to not to recognize those marriages.

Brigham Young University Law School professor Lynn Wardle puts it this way: "Since the Constitution was drafted in 1787, it's been the federal government that has had the authority to define who is eligible for federal programs and benefits."

Wardle, who testified in support of DOMA in 1996, notes that at the time, Hawaii seemed poised to become the first state to legalize same-sex marriage, "and Congress said nope, there's a very clear consensus on what marriage is. ... It's the union of a man and a woman."

The House leadership, in its legal brief, makes similar arguments in support of DOMA. In the face of state and public debate over same-sex marriage rights, the brief says, the federal government had good reason to "retain the traditional definition" of marriage as "the uniform rule for federal-law purposes."

Like proponents of California's ban on same-sex marriage, the brief also highlights the reproductive ability of opposite-sex couples, arguing that "the core purpose and defining characteristic of the institution of marriage always has been the creation of a social structure to deal with the inherently procreative nature of the male-female relationship." This inherent difference between same-sex and opposite-sex couples is just one of the rational justifications for their unequal treatment under federal law, according to the brief.