Accessibility links
Chris Hayes: From 'Up' In The Morning To 'All In' At Night After hosting his Sunday morning show on MSNBC for the past year and a half, Hayes is making the move to a weeknight news show that premieres April 1. At 34, Hayes will be the youngest prime-time anchor on any of the major cable news channels. 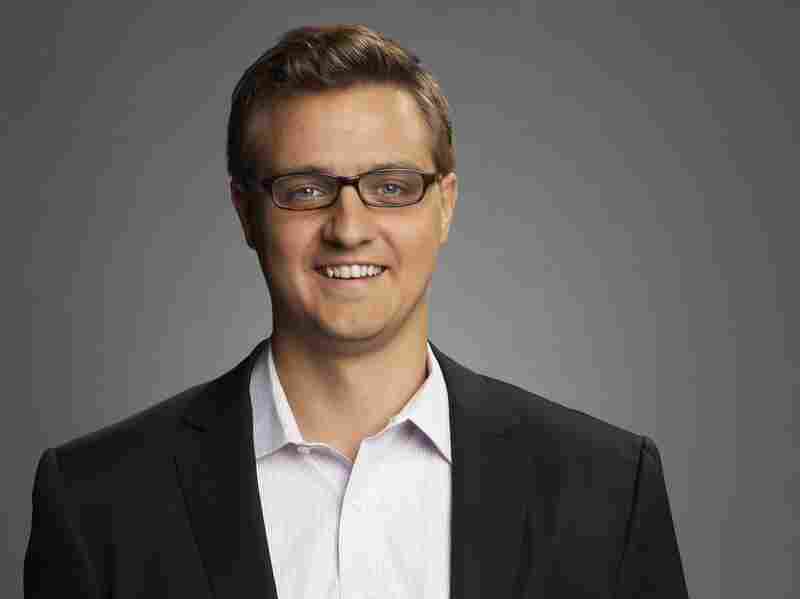 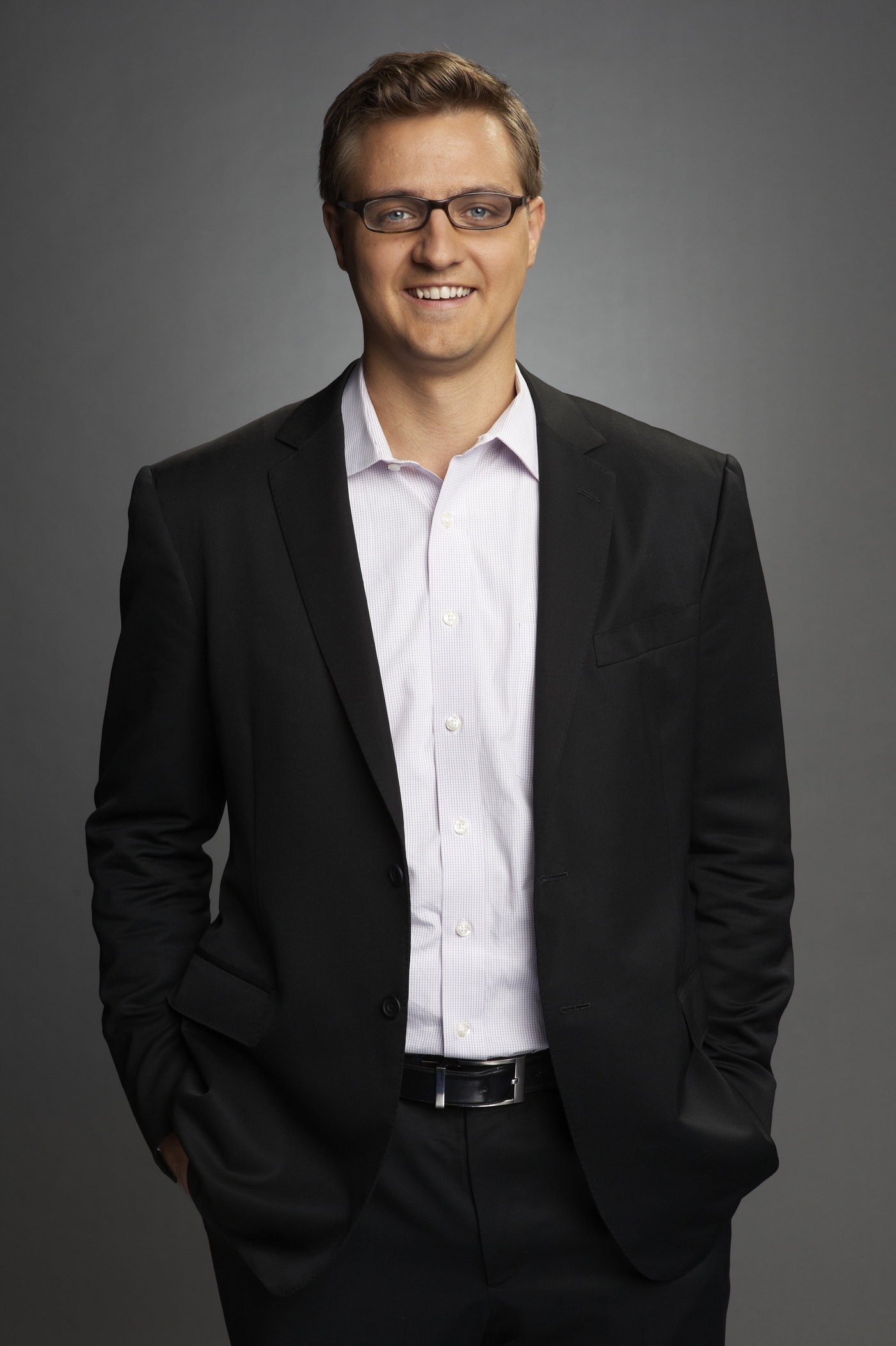 On Monday evening on MSNBC, All In with Chris Hayes will premiere, making the 34-year-old the youngest prime-time anchor on any of the major cable news channels. For the past 18 months, he has hosted an early morning weekend show — Up with Chris Hayes — on MSNBC, but he's already a familiar face to MSNBC evening viewers: He has frequently filled in for Rachel Maddow and has been a popular guest on her show.

Hayes says he expects the format of his new show to be similar to that of Up — long-form panel discussions in which the participants talk through several issues. Yet while Up was a two-hour program, All In will be one hour.

"Those discussions will be shorter by necessity," he tells Fresh Air's Terry Gross. "I think we might have fewer people at the table, but [All In] will be curious and it will be social and it will be about exchange and back and forth."

The animated conversation and equal exchange of ideas among peers that he strives to foster on live TV is an attitude he learned at the dinner table growing up.

"I grew up in a household where we talked politics a lot and argued politics a lot," he says. "[Politics] was a pastime for me. It was enjoyable. I have always viewed thinking about arguing, about questioning, pushing back with, joking, about sharing and discovering the world and the news as enjoyable, the same way that I view watching basketball."

Hayes, who is known for his liberal politics, is the author of the 2012 book Twilight of the Elites: America After Meritocracy. He started his career as a print journalist, writing for The Nation and The New Republic.

On how the past decade affected his politics

"My disposition as a human being is kind of a go-along-to-get-along person. I tend to trust authority. I tend to think people in charge broadly know what they're doing, don't lie to you, aren't going to start wars for no reason, and, you know, watching Iraq happen and then watching the financial crisis happen and then Katrina in the middle of that, you know, you turn around and you think, 'Wait a second: No one is on top of anything. Who the heck is in charge here? These people who say that they know what they're doing don't know what they're doing. I'm not going to trust them the next time they tell me they know what they're doing.' It's a radically unmooring feeling to recognize that people that you just figured kind of had it under control don't have it under control and might be totally incompetent or completely corrupt or totally self-dealing."

On encouraging guests to ask questions on the air

"I tell them they can ask questions, which is something people rarely do on television because people feel the need to present themselves as experts. But none of us know everything about everything, and, in fact, normal human conversation does not consist of a succession of declamations by individuals but, in fact, people ask each other questions."

I felt that kind of feeling you might feel sometimes, occasionally on live television, where it's like you see in your head the image of the astronaut who's been untethered from the space shuttle, floating out into the empty universe.

"I will mention this moment, although I am reticent because the subject of this moment is someone who I deeply, deeply love and admire. Wallace Shawn was on the show — the amazing playwright, also actor — and Wallace Shawn is an incredible person and I have absolutely loved his work, but he speaks at a very slow pace and he told me that going in. I met him, I think, at a party and said, 'Oh, God, I have to get you on my show. You're one of my heroes. You're Wallace Shawn,' and he sort of looked at me like, 'I don't know if you want me on television,' and I was like, 'I want you on television.' And then he came out and he started talking and he talked at the pace he talks, which is a deliberate pace, and I felt that kind of feeling you might feel sometimes, occasionally on live television, where it's like you see in your head the image of the astronaut who's been untethered from the space shuttle, floating out into the empty universe."

"Gibbs gave this incredible, spontaneous, honest answer. He said: 'One of the first things I was told when I was training to become press secretary, during the transition, was, "Don't say anything about drones. Pretend you don't know it exists. Don't even touch it." ... As soon as I heard the word "drones" coming out of the mouth of the reporter, I went into an internal place of, "I don't know what you're talking about." ' And that was a pretty startling admission."

"You start noticing that people are noticing how you look, and it is a profoundly alienating experience when it first happens, where you go on TV and you say something about some topic of the day, and on the Internet people are like, 'What was up with that shirt?' 'What was up with your hair?' And you think, 'Oh, that's kind of a bummer.' I think, actually, as a man it was a really useful, tiny sliver — a tiny, empathetic window — into what navigating the world as a woman often is, in which looks are so foregrounded and so scrutinized and so discussed."

On whether MSNBC is contributing to the polarization of audiences

"I think it's much more a symptom of it than a cause. My large sense is [that] there is an audience that is polarized already that we are speaking to. I think it's not quite as neat as that because there is a relationship between the two, so I think sometimes our network is part of the polarization machine, but I also think that there's things that are good about polarization. I think people that believe that the Voting Rights Act is absolutely important and shouldn't be overruled by the Supreme Court should have a place to go where other people feel the same way and are pretty ticked off about the specter of the Supreme Court striking down this act of Congress."