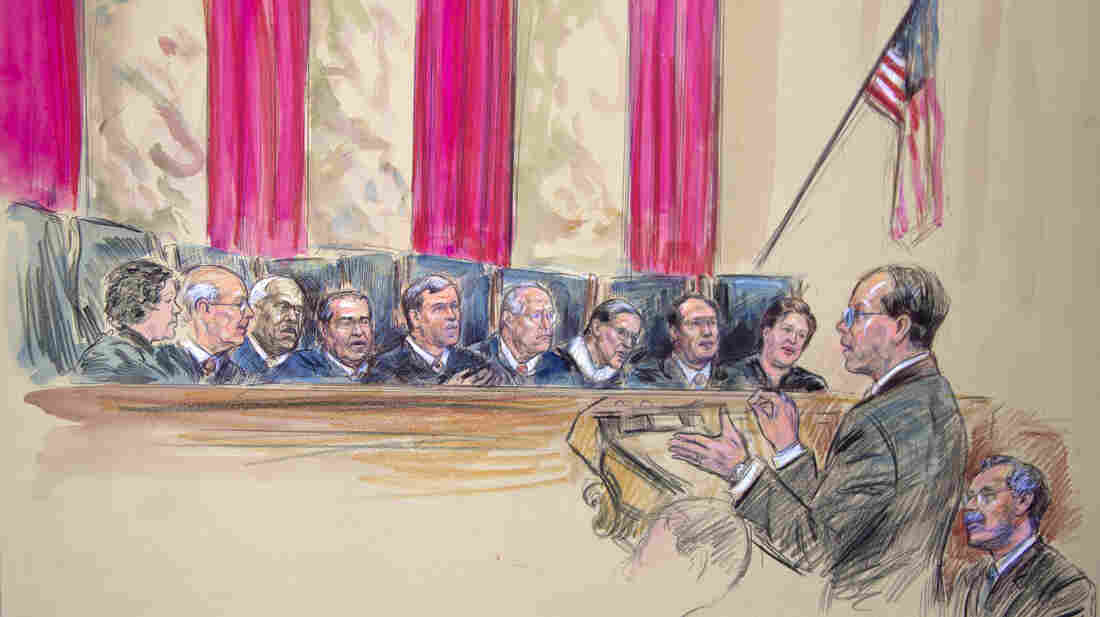 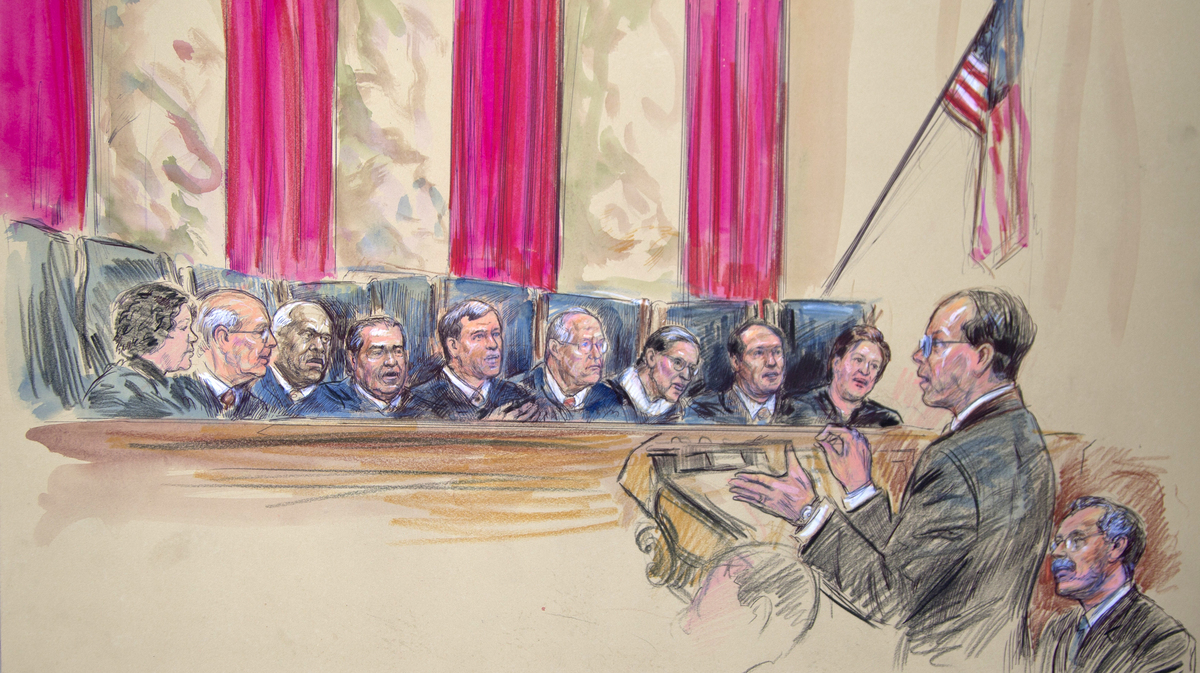 In the wake of the Supreme Court arguments Wednesday on the Defense of Marriage Act, same-sex marriage supporters have reason to be optimistic. Known as DOMA, the law bars federal benefits for legally married same-sex couples, even though those same benefits are automatically given to heterosexual married couples.

The second same-sex marriage case to be argued in as many days, the DOMA challenge was brought by Edith Windsor, whose marriage to Thea Spyer was legal in New York. But when Spyer died, Windsor had to pay $363,000 in federal estate taxes that she would not have had to pay if she had been married to a man. Windsor challenged the federal law and won in the lower courts.

The case, however, came to the Supreme Court with a procedural twist.

The Obama administration, in a rare move, declined to defend the federal law and sided with Windsor on the question of constitutionality. But the administration continued to enforce the law and appealed to the Supreme Court to rule on the issue.

At the same time, the House Republican leadership intervened in the case to defend the law. All of this produced a dilemma for the Supreme Court. In the first hour of arguments Wednesday, the question was whether the House had any right to defend the law, and if not, was there an actual disagreement between two parties that the court could resolve.

Chief Justice John Roberts harrumphed at President Obama's decision to enforce the law while at the same time refusing to defend it in court.

"I don't see why he doesn't have the courage of his convictions and execute not only the statute, but do it consistent with his view of the Constitution, rather than saying, 'Oh, we'll wait till the Supreme Court tells us we have no choice,' " remarked Roberts.

But Justice Elena Kagan suggested that having to pay $363,000 in taxes is "a classic injury."

Several justices asked what authority there was for the House to take over the function of defending the law.

Justice Anthony Kennedy wondered whether the Senate would have the right "to take the other side of this case, so we have the House on one side and the Senate on the other?"

Justice Samuel Alito asked why it's OK for only one house to defend the law when it takes both houses to pass a law.

The procedural back and forth finally prompted Kennedy to observe that the procedural case "does give you intellectual whiplash."

But when the court moved on to the question of DOMA's constitutionality, Kennedy repeatedly expressed the view that the law, by not deferring to the state definition of marriage, inappropriately steps on the states' toes.

When Congress enacted DOMA in 1996, it was reacting to the possibility that Hawaii would become the first state to legalize same-sex marriage, he noted.

In short, Clement said, Congress was saying, "Wait a minute. Let's take a timeout here. This is a redefinition of an age-old institution. Let's take a more cautious approach where every sovereign gets to do this for themselves."

Justice Sonia Sotomayor didn't seem to buy that argument. "So they can create a class they don't like — here, homosexuals," and treat them differently under federal law when it is state law that deals with marriage, she asked.

By refusing to acknowledge the state definition of marriage for homosexual couples, she said, the federal law creates "two kinds of marriage; the full marriage, and then this sort of skim-milk marriage."

'Never Been Done Before'

If the federal government can do that for marriage, she wondered, could it also do it for divorce?

Kagan noted that historically, the federal government has always deferred to states in their definition of marriage. DOMA, she said, does something that's really "never been done before." 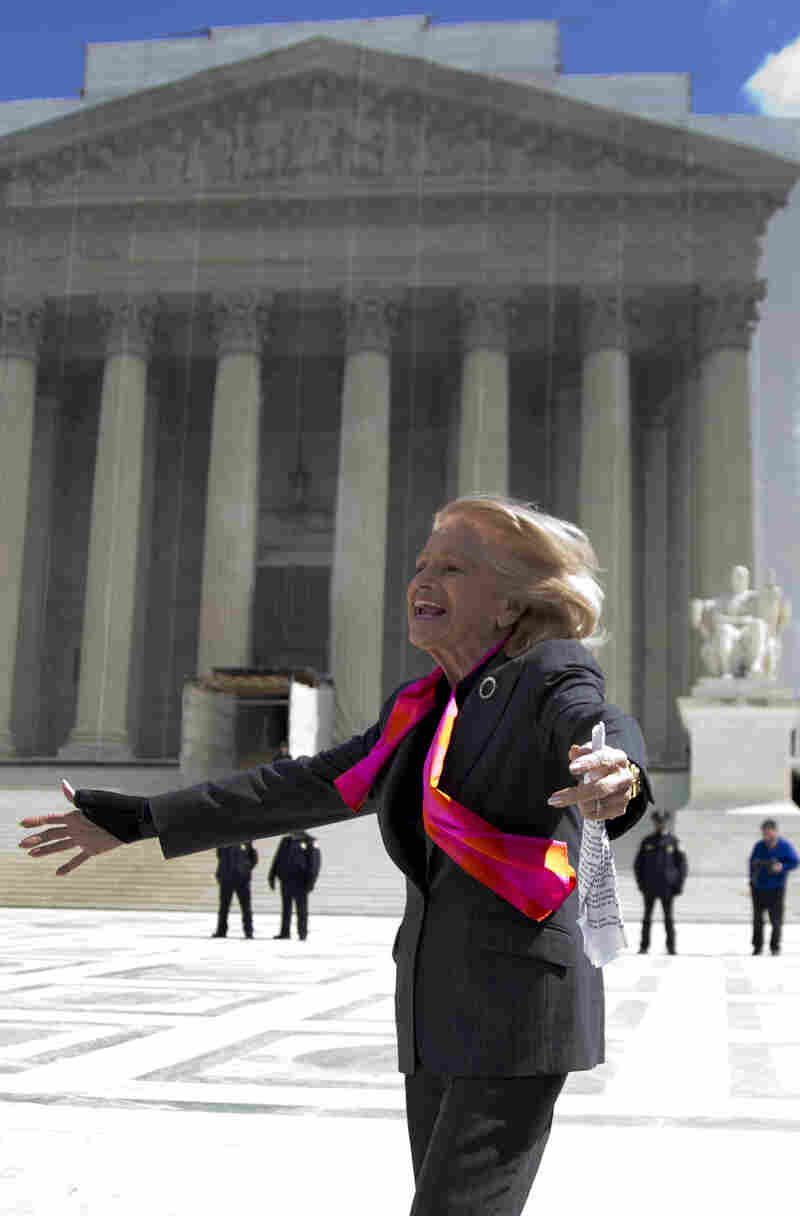 Plaintiff Edith Windsor, who challenged the federal Defense of Marriage Act, looks toward supporters in front of the Supreme Court on Wednesday. Carolyn Kaster/AP hide caption

Clement maintained that the federal government has gotten involved in defining marriage — for example, insisting on the prohibition of polygamy in the states.

Kagan shot back, "Well, is [that] what happened in 1996?" Quoting from the House report issued at the time DOMA was enacted, Kagan read out loud, "Congress decided to reflect and honor a collective moral judgment and to express moral disapproval of homosexuality?"

The quotation drew audible groans and whispers throughout the courtroom.

After lawyer Clement sat down, Solicitor General Donald Verrilli told the justices that DOMA is quite simply discrimination.

What it does is withhold an array of federal benefits from lawfully married same-sex couples, he said. "That means that the spouse of a soldier killed in the line of duty cannot receive the dignity and solace of an official notification of next of kin."

Kennedy, however, seemed relatively uninterested in the discrimination argument and more interested in the question of whether the federal government can interfere with states' rights to regulate marriage.

"You think Congress can use its powers to supersede the traditional authority and prerogative of the states to regulate marriage in all respects?" asked Kennedy.

Verrilli said no, it can't, but the government's position in this case is that DOMA is an unconstitutional denial of the equal protection of the law.

"It's time for the court to recognize that this discrimination, excluding lawfully married gay and lesbian couples from federal benefits, cannot be reconciled with our fundamental commitment to equal treatment under law," said Verrilli.

But the solicitor general dodged the question of whether similar laws in most states would be unconstitutional.

Following Verrilli to the lectern was lawyer Roberta Kaplan, representing Windsor, the New York widow who brought the lawsuit. Justice Stephen Breyer questioned Kaplan about the argument that Congress enacted DOMA to have a uniform rule.

"There has been this uniform, one man, one woman rule for several hundred years, and there's a revolution going on in the states," he said. "We either adopt the revolution or push it along a little, or we stay out of it." Breyer noted that those defending DOMA contend that in passing the law in 1996, Congress simply decided to stay out of the controversy.

"Congress did not stay out of it," Kaplan replied. She argued that DOMA is not neutral when it stops federal recognition of couples who are legally married solely because of their sexual orientation. "It's undermining the policy decisions made by those states that have permitted gay couples to marry," she said.

Roberts repeatedly questioned the notion that Congress was acting with a hostile, discriminatory motive.

"Eighty-four senators based their vote on moral disapproval of gay people?" he asked Kaplan.

Some did, she said, most probably didn't, but "times can blind," she declared, and back in 1996, "people did not have the understanding that they have today, that there is no distinction" between homosexual and heterosexual couples.

Since 1996, Kaplan said, there has been a sea change in public understanding.

In view of that, Roberts seemed to suggest, there is no reason for the court to step in.

"You don't doubt that the lobby supporting the enactment of same-sex marriage laws in different states is politically powerful, do you?" he asked.

Kaplan said she did in fact disagree, prompting the chief justice to remark in disbelief: "Really. ... As far as I can tell, political figures are falling over themselves to endorse your side of the case."

A decision in this case is expected at the end of June.