Accessibility links
On India's Trains, Seeking Safety In The Women's Compartment Like some other big cities around the world, New Delhi has train cars reserved for women only. The female riders say it offers them a secure way to commute, but they argue that the larger problem is male attitudes. 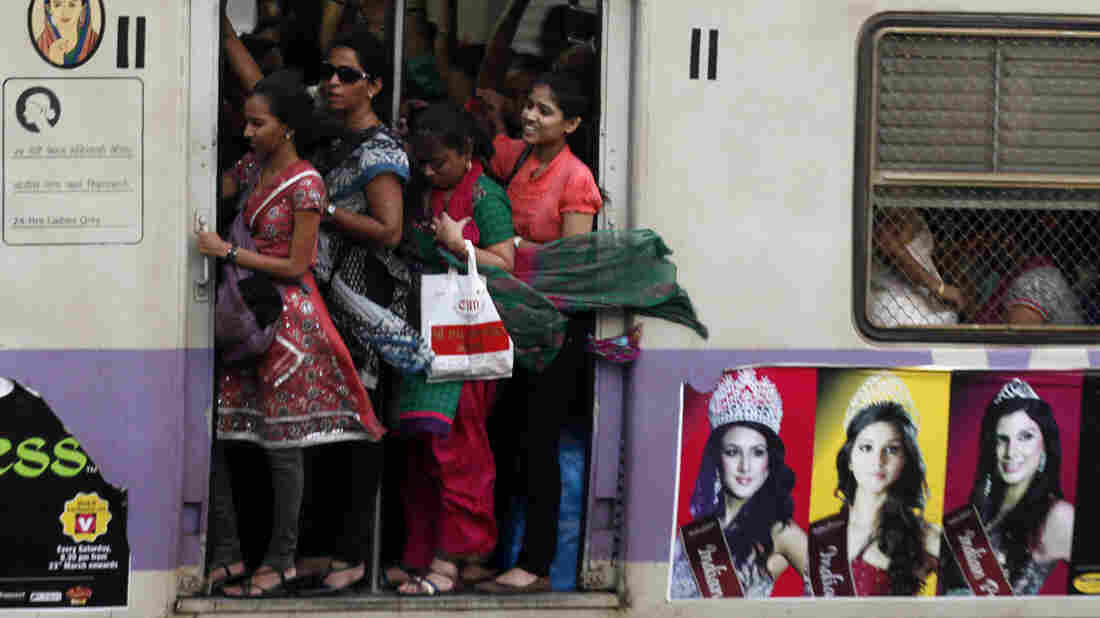 Passengers travel in a train car reserved for woman in Mumbai on March 8. The cars are offered in New Delhi and other places as well. Women say they like the security that the cars offer, but say men's attitudes need to change. Rajanish Kakade/AP hide caption 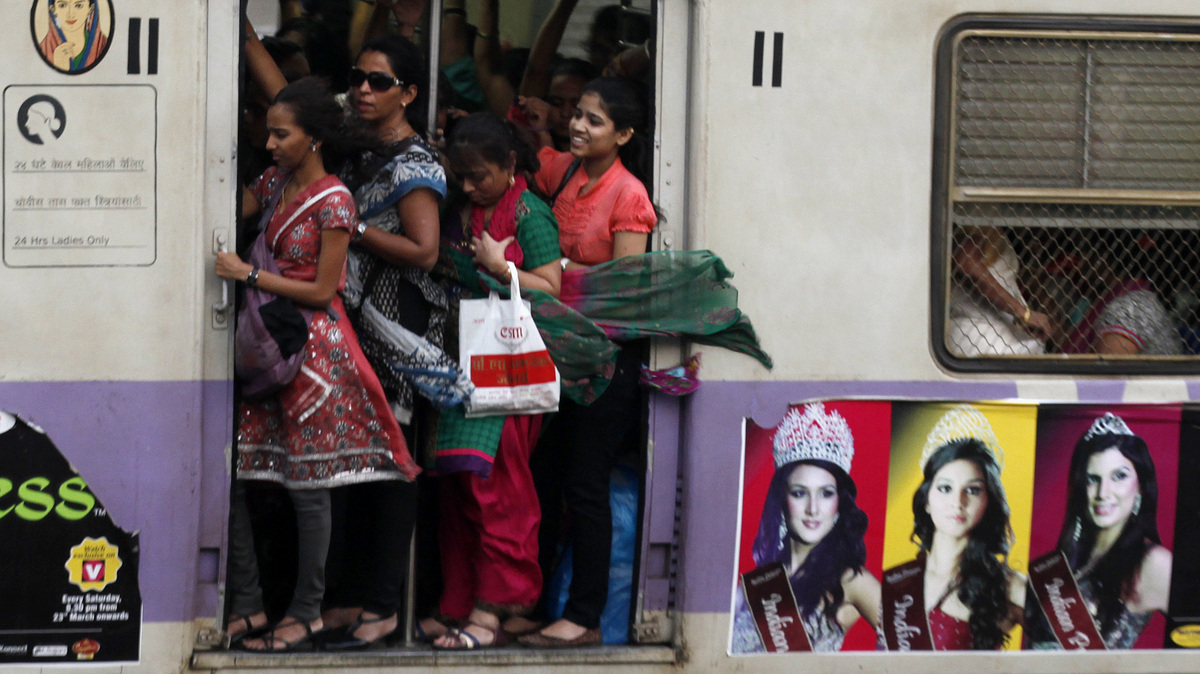 Passengers travel in a train car reserved for woman in Mumbai on March 8. The cars are offered in New Delhi and other places as well. Women say they like the security that the cars offer, but say men's attitudes need to change.

Headlines in India's national newspapers tell the story of the state of women in the country. A sampling of what readers in New Delhi encounter makes for sober reading:

India's media have been zealous about exposing the pervasive sexual violence in the country since the gruesome gang rape and subsequent death of a 23-year-old woman in December ignited an international outcry.

Mass anger at home galvanized the Indian public to demand better policing, swifter justice and safer streets in the Indian capital. Parliament last week approved a new sexual assault law that strengthens penalties for rape and for the first time makes offenses such as stalking and acid attacks a crime.

Still, navigating New Delhi can be treacherous for women. Taxis are expensive, and public transportation can be unreliable, overcrowded and unsafe.

All of this helps explain the popularity of the women-only compartment on New Delhi's metro system.

For female passengers worried about safety, a separate carriage for women eases the mind, says lawyer Saloni Chowdhry, who climbs aboard twice a day. 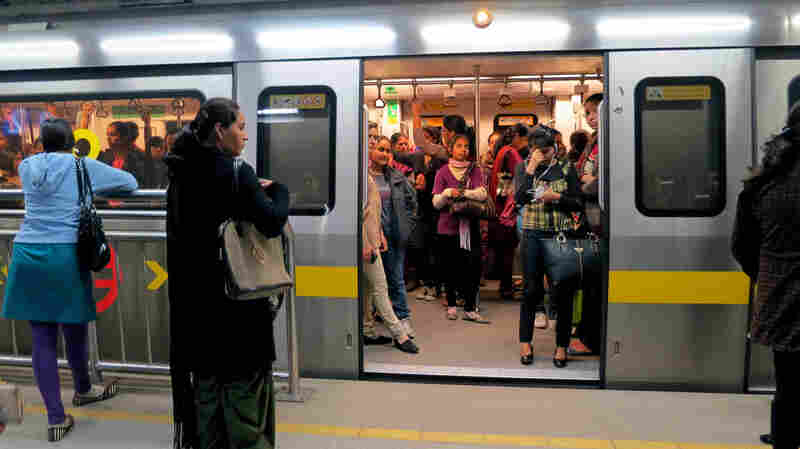 The women-only carriage on New Delhi's metro has gained great popularity since it was inaugurated in 2010. Yirmiyan Arthur/AP hide caption 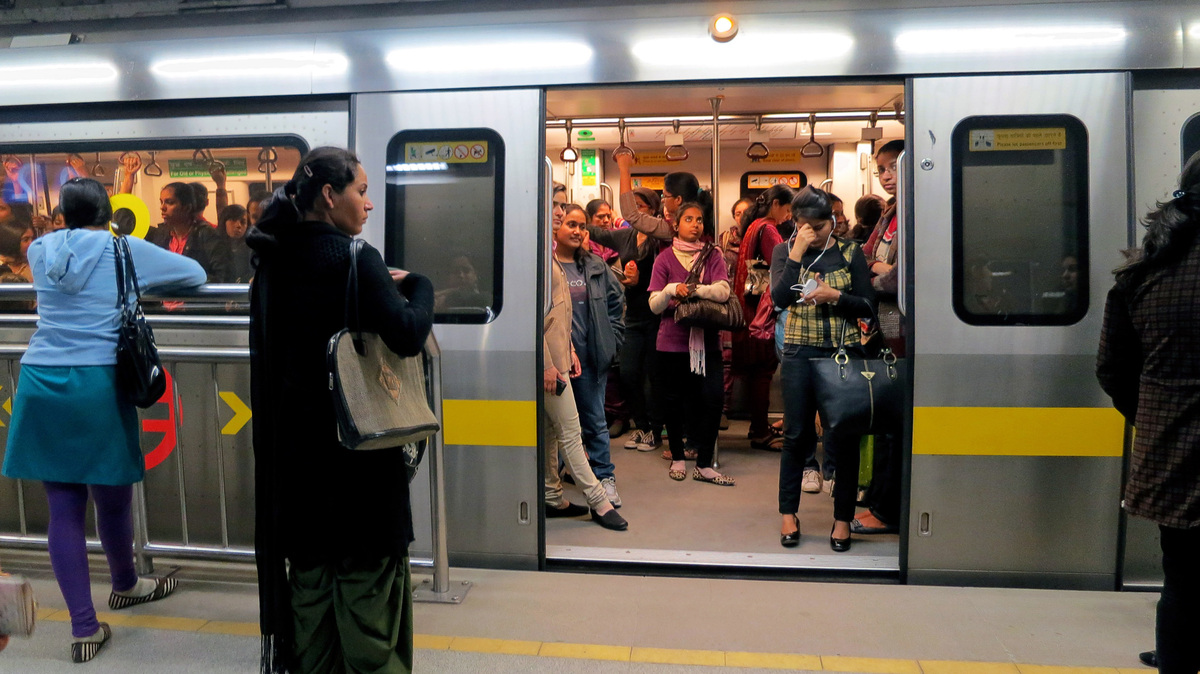 The women-only carriage on New Delhi's metro has gained great popularity since it was inaugurated in 2010.

"I prefer it from the general compartment because it's safer, less of Eve-teasing, so I prefer the ladies compartment any day," she says.

"Eve-teasing" is an Indian euphemism for the way men harass women, pass sexually charged remarks their way or intentionally brush up against them to make physical contact. It's everyday sexist abuse of India's everywoman, or "Eve" as the Biblical name denotes.

Saloni has been on the receiving end of sexual harassment on the subway.

"They want to feel you," she says uncomfortably. "It's a little sick. So for the past three years since the ladies compartment started, we are much safer now. You feel better, and even if it's a little crowded, there are all ladies around you and you feel more secure."

Other major cities, including Cairo, Tokyo, Beijing and Rio de Janeiro, all reserve subway cars for women to spare them from being groped or harassed. India's commercial capital Mumbai also provides sex-segregated cars for women's safety.

Pritpal Kaur, a radio jockey, says New Delhi's women-only compartment is a refuge especially at night, when she says men have leered at her and deployed Hindi slang that refers to women, delicately translated, as "hot stuff."

"Once or twice I slapped them back, but it does not work every time because sometimes I got reactions back," she says.

Over time, the general compartments have become the domain of men, who outnumber the women by 4 or 5 to 1. The ratio reflects what is happening more generally in Indian society. While women are increasingly enrolled in higher education, data from the Central Statistics Office show that just 12.8 percent of women in the urban sectors participated in the workforce in 2010, compared with 55.6 of men.

A Place For Gossip

When the ladies carriage fills, there is a dormlike camaraderie as young women survey fashion trends among fellow passengers and swap gossip.

"It's complete entertainment," says Sonal Sinha, who confides that she and her friends also eavesdrop on girls who are themselves gossiping about others. "That's the most fantastic thing" about the compartment, she says, eliciting laughter from her group.

Akanksha Gupta says women can get plenty pushy in the lone female carriage, but at least she can relax and not worry about men staring at her.

A recent Times of India survey said 96 percent of women in Delhi feel unsafe after sunset. The sense of vulnerability is deepened by a steady stream of stories in the mass media about fathers raping daughters, uncles molesting nieces and headmasters preying on young schoolgirls.

Male and female perceptions of the problem can differ widely.

Rajesh Kumar travels in the general compartment with his female colleague Manisha Murli. He says out of 100 men, "perhaps two or three" engage in Eve-teasing or unwanted touching.

But Murli disagrees. "It's not that little," she protests, putting it around 50 or 60 percent of the men.

Some religious and political leaders say the answer is to hide women away — to tell them not to go out after dark and to dress modestly.

Parinita Chaudhary, an 18-year-old science student, steps into the women-only carriage and says the prevailing attitude, especially among the older generations, is that she is asking for trouble if she doesn't avoid men and keep to herself.

Outside The Big City, A Harrowing Sexual Assault In Rural India

"They think that girls initiate the problems — the clothing sense of the girls' initiates the problems," she says. "That's why the girls prefer that we should go into the ladies carriage and we avoid ... guys. It's not that they tell the male[s] to change their mind or tendency. They tell the girls and they blame the girls."

In the recent debate over the new sexual assault law, some male members of Parliament expressed utter incomprehension at terms such as "stalking" and "voyeurism."

"If a boy doesn't follow a girl," one said, "how can romance happen?"

Activist and author Kamla Bhasin says India's challenge is to work "on changing men, on changing their mindsets."

For every time they tell women not to do something, Bhasin says, they should tell men and boys "100 times" not to abuse or misbehave with women.

India fares very poorly when it comes to gender equality, according to a new U.N. report on human development. The report ranks India 132 out of 187 countries, and says with the exception of Afghanistan, all nations in South Asia were a better place for women than India.

Eighteen-year-old Chaudhary says her country must resolve the disconnect between the dazzling rise of modern India and its outmoded treatment of women.

"They say that India is developing, but the mind also has to be developed," she says. "It's not only the infrastructure that we should change. It's the mind that has to be changed."