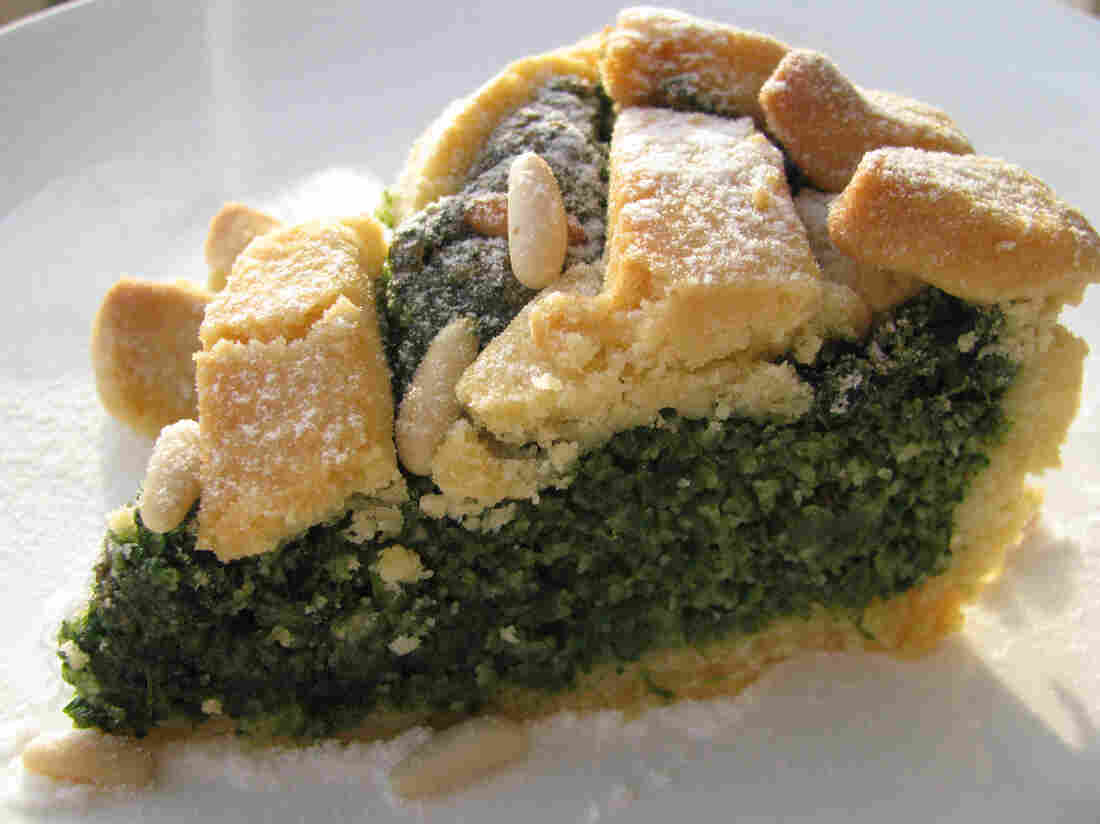 Easter brings with it many predictable foods: chocolate bunnies, jelly beans, ham, and hard-boiled eggs. But some Italians use the season to feature a surprisingly sweet vegetable dish on their tables.

It's called torta co'bischeri agli spinaci. Francine Segan calls it "Tuscany's sweet spinach pie." Segan is a food historian and author of Dolci: Italy's Sweets. She shared a recipe for the pie for All Things Considered's Found Recipe series.

Segan says she stumbled across the dessert while visiting Tuscany. One day while exploring, she came across a side street where people were lined up outside of a bakery.

"When I got to the window [and] looked in, I noticed something bright green," she says. "It was so surprising because the Italians don't generally use food coloring."

The green was from spinach, which is boiled and chopped, then mixed with finely ground almonds, sugar and eggs. Unlike a quiche, the dish is sweet. Segan says during the Middle Ages and Renaissance, Italians didn't divide courses the way we do now. It wasn't unusual to have something sweet at the beginning of the meal.

"They thought balance with every course [would] keep the appetite interested throughout the feast," she says.

The spinach pie is baked in a distinctive pie crust, where the dough isn't pinched at the edge, but shaped into chubby round points that mimic bischeri — the tuning pegs of a violin or guitar.

"It's so simple to make and it's so rewarding because the flavors are so unique and surprising — and it's even healthy," Segan says. "You get some of your vegetable servings in dessert." 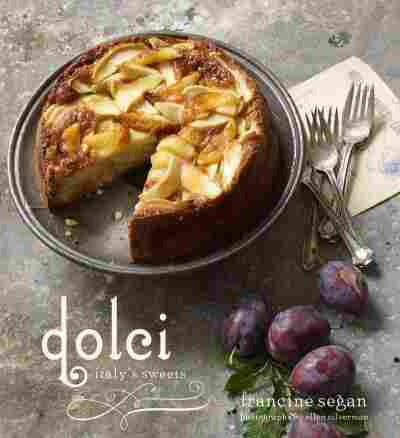 by Francine Segan and Ellen Silverman

The ground almond-spinach filling is light and satisfyingly spongy — almost soufflé-like. As with zucchini bread and carrot cake, the spinach contributes an earthy undertone, moistness and an unusually brilliant color.

For the crust: In a large bowl, in a food processor or on a clean work surface, mix the flour, butter and sugar until the mixture resembles coarse sand.

Roll the dough into a disc, cover with plastic wrap and refrigerate for at least 30 minutes before rolling out.

Roll out 2/3 of the dough, making it large enough to hang well over the sides. If you like, make a series of "peg" shapes along the outer edge of the dough. To do that, fold the edges of dough over and cut into the edges, and gently press "fret" shapes by pinching the dough between thumb and forefinger at a distance of about 1/2 inch apart.

Using a fork, poke holes throughout the entire bottom and sides of the crust.

Roll out the remaining dough to form lattices over the top of the filling. Refrigerate all the dough, covered in plastic wrap, until ready to use.

For the filling: Cook the spinach in a few ounces of salted water until tender. Allow to cool. Squeeze out all the cooking liquids and finely chop in a mini food processor. Reserve.

In a food processor, grind the almonds until they resemble coarse sand. Reserve.

In a separate bowl, beat the whites until soft peaks form, then add in the remaining 1/3 cup of sugar and beat until it forms a glossy meringue.

Slowly fold the meringue into the yolk mixture. Pour into the prepared pie crust. Sprinkle with the pine nuts and top with the remaining dough in a lattice pattern.

Bake at 350 degrees for about 1 hour, until golden.

Allow to cool to room temperature, then serve sprinkled with confectioners' sugar.