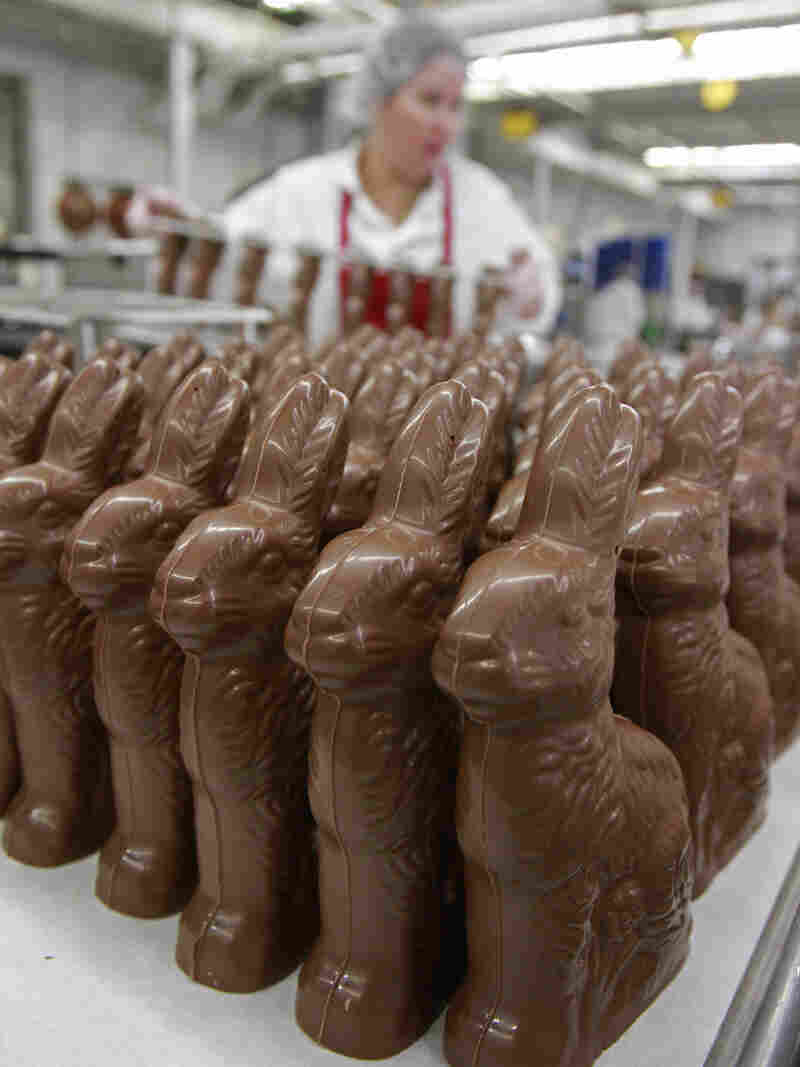 While many people enjoy sweet treats — like these chocolate bunnies — the price of a key ingredient has some people bitter. A government subsidy program is criticized for keeping sugar prices too high. But as prices fall, the government may buy sugar to help processors. Toby Talbot/AP hide caption 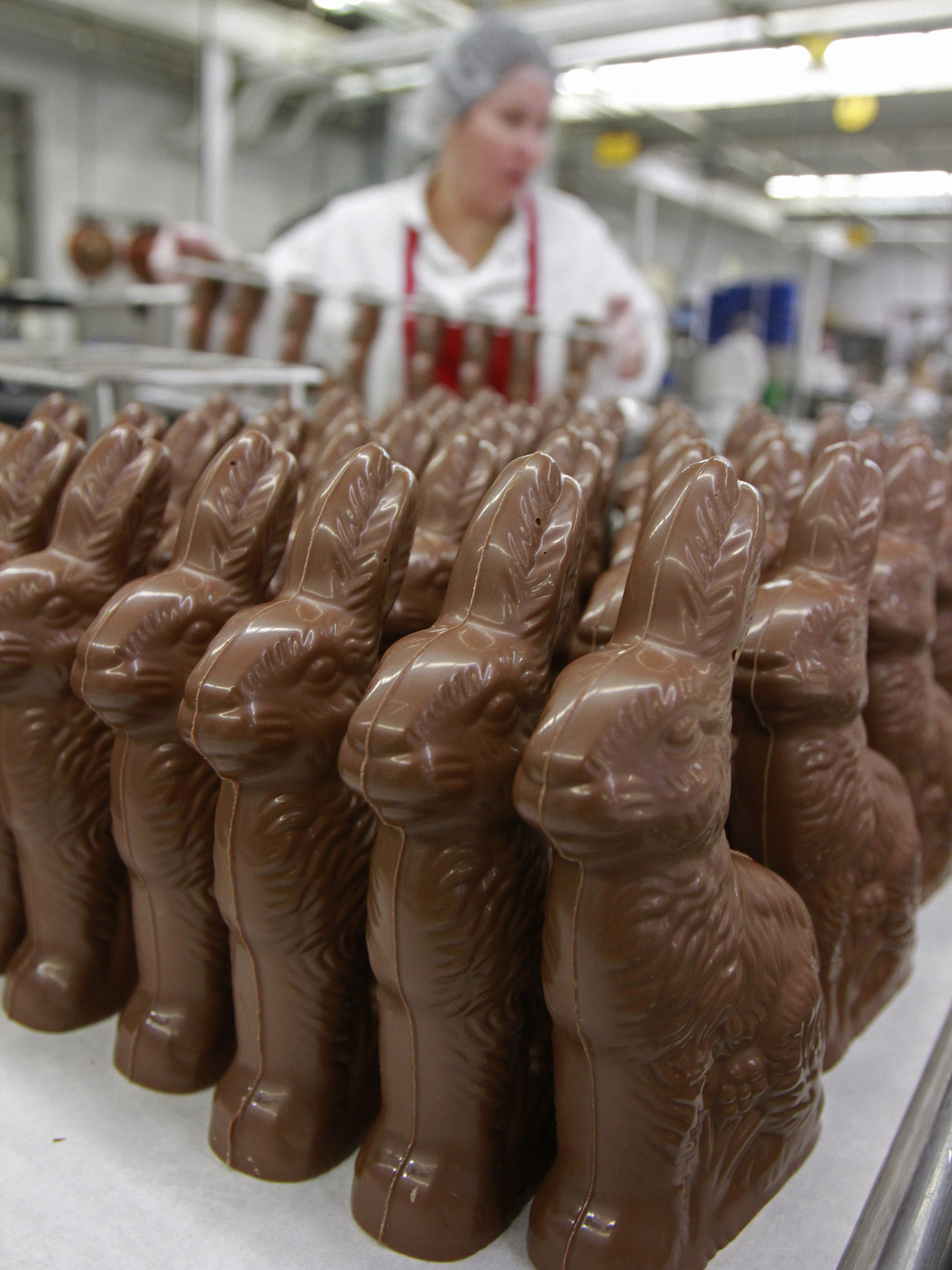 While many people enjoy sweet treats — like these chocolate bunnies — the price of a key ingredient has some people bitter. A government subsidy program is criticized for keeping sugar prices too high. But as prices fall, the government may buy sugar to help processors.

While you indulge in some Easter Peeps and chocolates this weekend, you might want to think about all that sugar. No, this isn't a calorie warning. In the U.S., raw sugar can cost twice the world average.

Critics say U.S. sugar policy artificially inflates sugar prices to benefit an exclusive group of processors — even though it leads to higher food prices. But this year, prices fell anyway. Now, the government could be poised to use taxpayer dollars to buy up the excess sugar.

"It's just something in the culture of South Louisiana," Gravois says. "If you're a farmer, that's pretty much what you do."

And in the end, that sugar might end up in a jelly bean. Bob Simpson, president of Jelly Belly in California, says it's 40 percent of the product and the "most expensive ingredient."

Sugar costs are a complicated combination of import restrictions, production quotas and a kind of guaranteed price.

"The U.S. sugar system is essentially a Soviet-style control on production," says Chris Edwards, an economist at the Cato Institute.

The effect of these policies, he says, is that U.S. sugar prices normally remain artificially high — sometimes twice the world price. (Last year, the price of sugar around the world averaged 26.5 cents per pound, compared with 43.4 cents in the U.S.) That hurts food companies and leads to higher prices at the grocery store.

"The core goal of policymakers has been to push up U.S. sugar prices to the benefit of U.S. sugar growers," Edwards says.

A big part of this policy is a sweet loan program for the processors that refine sugar. To pay growers like Gravois right away, processors can take out government loans. The sugar itself is the collateral.

This leads to an interesting choice: If sugar prices go up, processors sell it on the open market and make a profit. If prices fall, they can just hand over their sugar to the government and keep the loan money.

The program is supposed to run at no cost to taxpayers.

"The loans are typically repaid in most years," says Joe Glauber, chief economist at the U.S. Department of Agriculture.

But that could change this year. Even with all those import restrictions and price supports, sugar prices fell. Farmers like Gravois produced a lot more than expected.

"Last year was the best crop we ever made," Gravois says.

That's why processors might now be tempted to forfeit their sugar to the government instead of selling it. This is where your tax dollars come in.

The government is considering buying that surplus sugar directly from processors and then selling it at a loss to companies that make ethanol. That would take some of the surplus off the market, boosting processors' profits, but taxpayers could be on the hook for millions of dollars.

The USDA says it's not to blame. The agency just administers what Congress sets in the farm bill.

"It is what it is. It's been a program that supports a lot of sugar producers and has had a lot of support in Congress over the years," Glauber says.

The Consequences Of A Short-Term Farm Bill Fix

In fact, import tariffs on sugar date back to 1789. Other provisions originated during the Great Depression.

Sugar policy has been so contentious for so long that the two sides have derisive nicknames for each other — it's "Big Sugar" versus "Big Candy."

Representing Big Candy is Bob Simpson from Jelly Belly, who also chairs the National Confectioners Association. "We'd just like them to compete on a fair, open market without the intrusion of the federal government," he says.

He says Jelly Belly opened a plant in Thailand, partly to get cheaper sugar for markets overseas.

"There's really no reason for contention about U.S. sugar policy. It's the most successful of any U.S. commodity policy," says Roney, who adds that in most years this program costs taxpayers nothing — unlike other farm supports.

He blames falling prices on Mexican imports which, under the North American Free Trade Agreement, are not controlled by tariffs.

What To Do With Excess

Roney says the argument over higher food prices is really about food companies lobbying to get sugar prices down. "Is that out of some altruistic desire to help consumers? Well, no. It's so they can increase profits," he says.

He says ditching the sugar supports would put thousands of jobs at risk.

But opposition to the sugar policy has brought together an unusual alliance of libertarian conservatives, environmentalists, food companies and lawmakers from both parties.

In the meantime, the government has about six months to decide whether to buy excess sugar using our dollars.