Accessibility links
From The Stone Age To The Digital Age In One Big Leap Deep in the Amazon, an isolated Brazilian tribe almost vanished when it first had contact with the modern world. Now the Surui tribe is working with Google to do things like report on illegal logging in the forest. 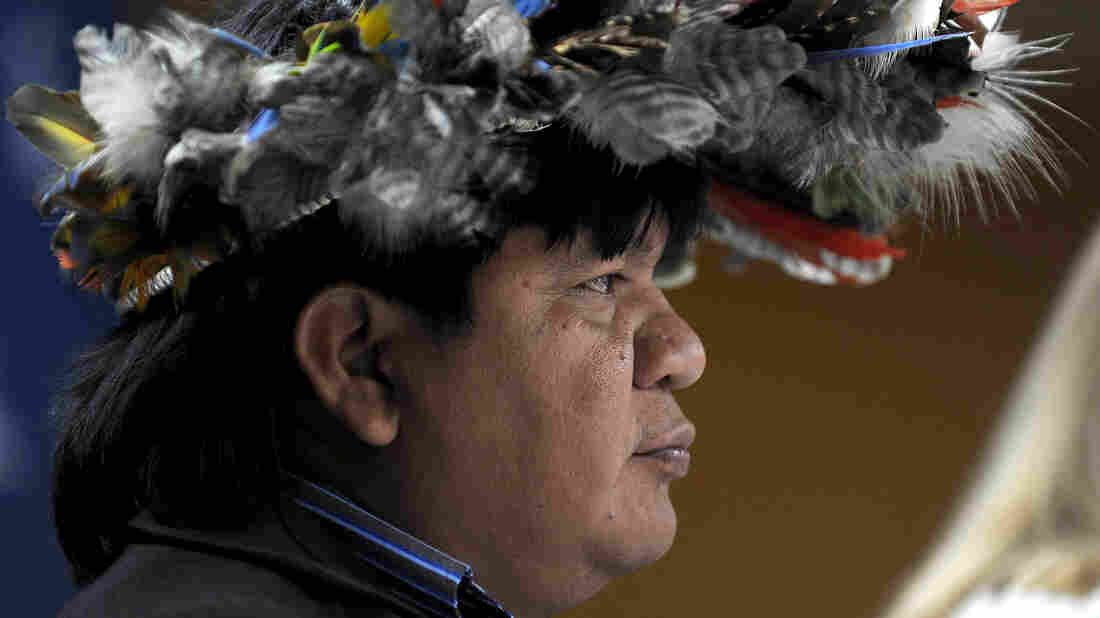 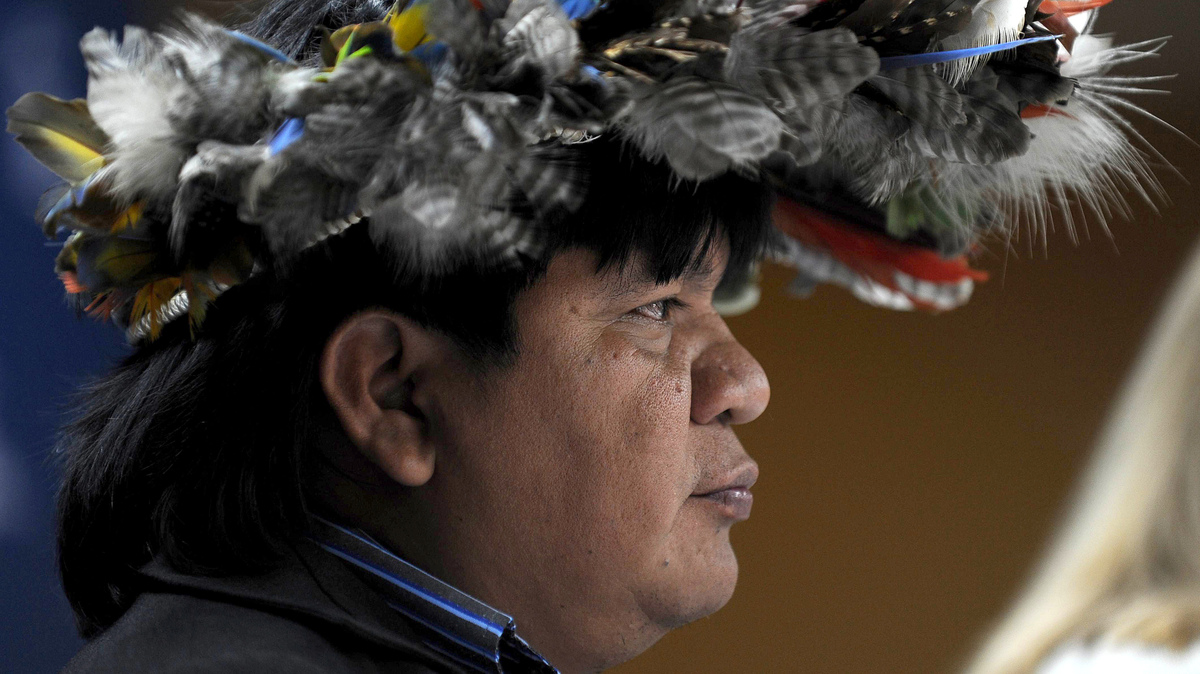 Chief Almir of Brazil's Surui tribe attends a press conference with Google representatives in Rio de Janeiro last year. Chief Almir has brought technology to his previously isolated people, who now use smartphones to send photos of illegal logging in the Amazon.

In the heart of the Amazon in western Brazil, an Indian tribe called the Surui lived in the Stone Age as recently as the late 1960s. They wore loincloths, hunted monkeys with bows and arrows, and knew little of the increasingly modernized country in which they lived.

These days, the Surui are perhaps the most technology-savvy tribe in the Amazon. Their chief is among the most traveled of Indian leaders, one who has journeyed as far away as Dubai and Indonesia to lobby for international partnerships to save the rainforest in the Surui's reserve.

Chief Almir Surui, 38, has built alliances with American technology companies, environmental groups and lawmakers in the capital, Brasilia, and in cities far beyond Brazil. And the Surui reserve, called Seventh of September for the date in 1969 when the outside world made its first sustained contact with the tribe, has become a hotbed of technology designed to protect the jungle.

The Indians use smartphones to monitor illegal logging and Google Earth Outreach to show the world what their reserve is like.

"Our model calls for saving the forest and fighting for sustainable development," says Chief Almir, as he stands in the middle of the forest surrounded by chirping birds and many species of trees. "It's a challenge because it's very important to do all this. But other countries do not always pursue responsible policies."

On a recent day, Chief Almir and two other Indians, an uncle and nephew, use machetes to hack through the brush at the reserve, which is about the size of Rhode Island and mostly covered by trees.

It's a bewilderingly diverse stretch of jungle — a land rich in animal life, like tapirs and monkeys. There are many different trees and lots of bird life, from woodpeckers to parrots to eagles.

"The forest has much to offer," Chief Almir says, as he stares up into the trees. "Products like nuts. Wood, if the logging is well regulated. And the forest pumps and protects water."

And without that, Chief Almir asks, what would we drink? 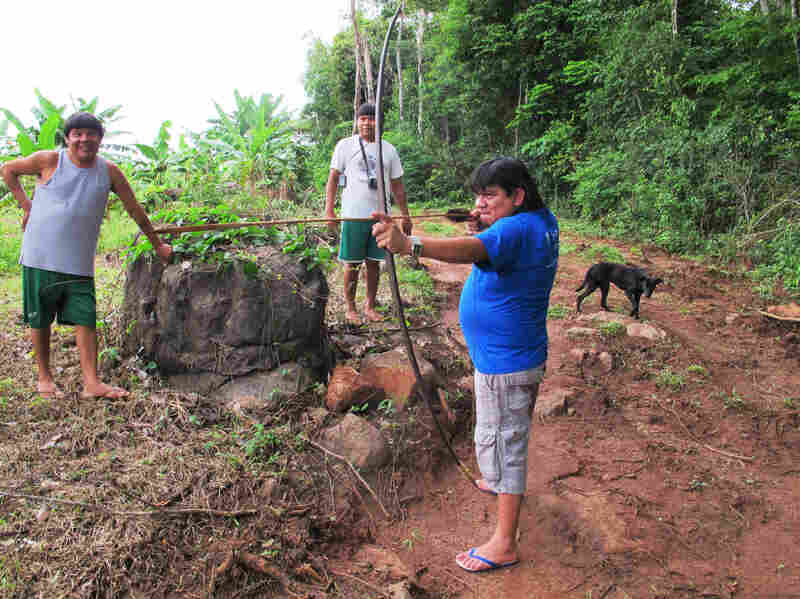 Chief Almir still knows how to handle a bow and arrow, the traditional weapon of choice of the Surui people. Juan Forero for NPR hide caption 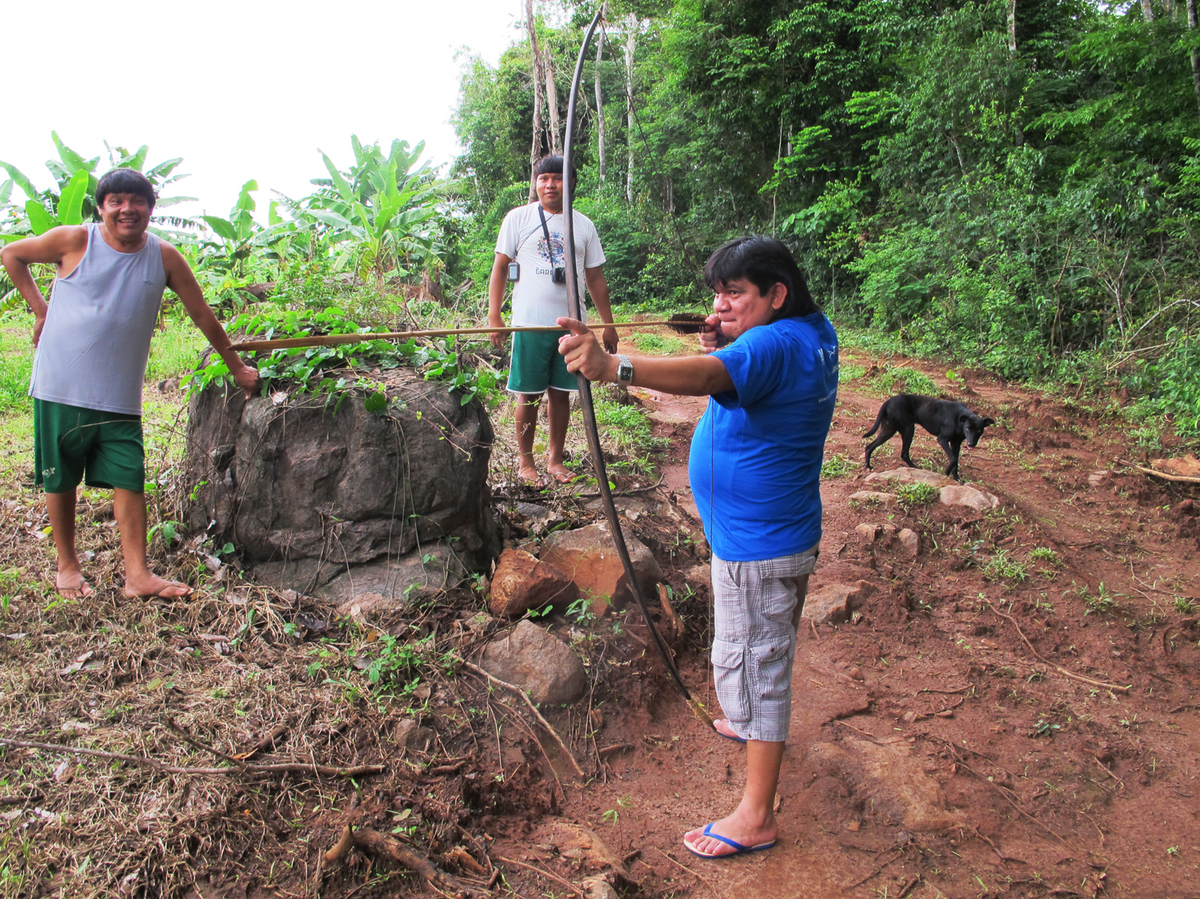 Chief Almir still knows how to handle a bow and arrow, the traditional weapon of choice of the Surui people.

The chief doesn't just pose those kinds of questions to visitors; rather, he travels to tell it to statesmen and Wall Street financiers, tech-company executives and environmental activists.

"I wouldn't have gone to 33 countries to talk about our culture, our health care, our education and the way things are if it wouldn't work," says Chief Almir, who has made 16 forays to the United States.

The Surui's first sustained contact with modern Brazil came a little over 40 years ago with the arrival of road-building crews and settlers, loggers and Brazil's government. The federal Indian affairs agency laid out trinkets, as well as machetes, for the Surui, who wandered out of the forest and, in essence, into a new world.

Indeed, it changed their lives forever, says Jose Itabira Surui, Chief Almir's uncle, who, who like all in the tribe, uses Surui as a last name.

"It was very sad because they almost finished off the Surui people," he says.

Hungry For Energy, Brazil Builds Monster Dams In The Amazon

The settlers killed Indians, he recalls, and so did a range of diseases, from small pox to tuberculosis. A tribe with 5,000 members bottomed out at 300.

But the tribe still had some elders, and they fostered a younger generation of leaders. The first to go to college was Almir, in the early 1990s.

He returned knowledgeable about technology and also convinced that the Surui had to find partners to save themselves.

Rebecca Moore of Google was among the first to come on board, back in 2007. She describes Chief Almir as "very savvy. I've never seen anyone who could say 'no' to him."

She recalled how Chief Almir told Google executives that his father's way of defending the Surui was obsolete.

"He realized that the time had come, he says, to put down the bow and arrow and pick up the laptop, that that was the future for defending their territory and strengthening their tribe," she says. "How could you say 'no'?"

Beto Borges, a Brazilian-born environmentalist who works at Forest Trends based in Washington, D.C.,, says Chief Almir knows how to get people's attention, whether it's in Rio de Janeiro or New York.

But what wins over converts to the Surui cause, says Borges, is Chief Almir's ability to lay out a cogent argument and persuade.

"All of a sudden, they're facing an indigenous person who can speak at the same level that they can, who can talk about strategic vision, for the companies as well as for his people," says Borges. He says it often leaves listeners astonished.

"I think that really shocks people to the point that they fall in love with him," Borges says. " 'Oh, this guy is fantastic, so we want to do something with him.' "

Those partnerships have led to tangible projects with the Surui.

Rhiza, a Pittsburgh company, worked with the Surui to design the interfaces on the smartphones the Surui would use to collect data about the forest for some of their projects.

Other projects include a slick film, made by the Surui with Google's help, which appears on Google Earth Outreach.

Surui rangers film illegal logging with Android phones and then upload it to the Web. And they use global-positioning devices to map territory, Chief Almir says.

"We want to generate information," he says, "show who are the Surui people and what are the difficulties that we face, to educate people around the world about that."

The tribe's main goal now is a carbon-credit program in which developing countries would pay the Surui to keep the forest intact.

This has been a yearslong process that entailed the difficult task of auditing the forest to determine how much carbon its trees contain. By calculating how much carbon is not released if the trees on Surui lands are left standing, the tribe hopes to sell so-called carbon credits internationally to polluters or governments that want to burnish a green image.

The long-range goal is for industries around the world that spew big amounts of carbon to buy credits and thus ensure that forests from Brazil to the Congo to Indonesia are left standing.

If an environmental governance system is created — the great hope of environmentalists and some governments — then polluters would meet environmental standards by paying others, like the Surui, to ensure carbon is not released into the atmosphere.

For now, the Surui hope to collect up to $1 million annually. It's not a big amount, but Chief Almir considers it an important first step.

The Surui still face threats and problems of all kinds, from those who sneak onto their territory to illegally cut down trees to Indians within their ranks who are open to being bribed by loggers.

Still, it's hard not to see how the tribe has made great advances. The Surui have maintained their language and customs. The population has risen to 1,200 and Surui hamlets, like the one where Chief Almir lives, bustle with activity.

Girls carve jewelry to sell in the towns outside the reserve, and men enjoy a game of dominoes on a sleepy afternoon. The tribe also has three computer centers where people can surf the Web.

And then there are the bows and arrows. In a field, Chief Almir fires an arrow and hits his target — a banana tree — from 30 feet away.

The chief celebrates with a whoop, noting that a foreign reporter was there to see it.

And then he says he has to get back to work. He's been developing a 50-year master plan for the Surui, which includes harvesting nuts in the forest and cultivating fruits in small groves.

"This is the great economic potential that the forest has," Chief Almir says.