Accessibility links
In Honduras, Fighting HIV/AIDS Through Music And Theater The Afro-Caribbean people known as the Garifuna have a rich tradition of music, dance and storytelling much like their forebears. They also have another parallel to Africa: a severe HIV and AIDS epidemic. The Garifuna are using their culture as a weapon to fight the spread of the virus. 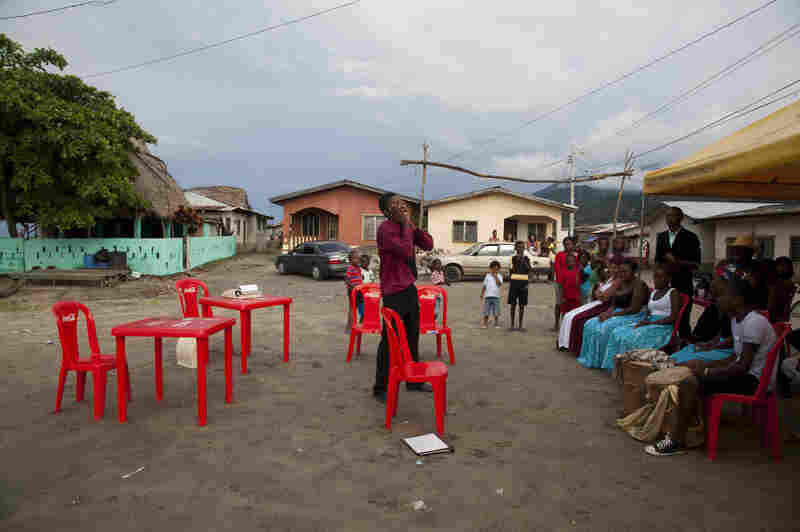 A community theater group performs at a festival Jan. 25 in Corozal. The theater group uses traditional Garifuna music and culture in its productions to help teach about HIV prevention and stigma. David Rochkind/Pulitzer Center hide caption 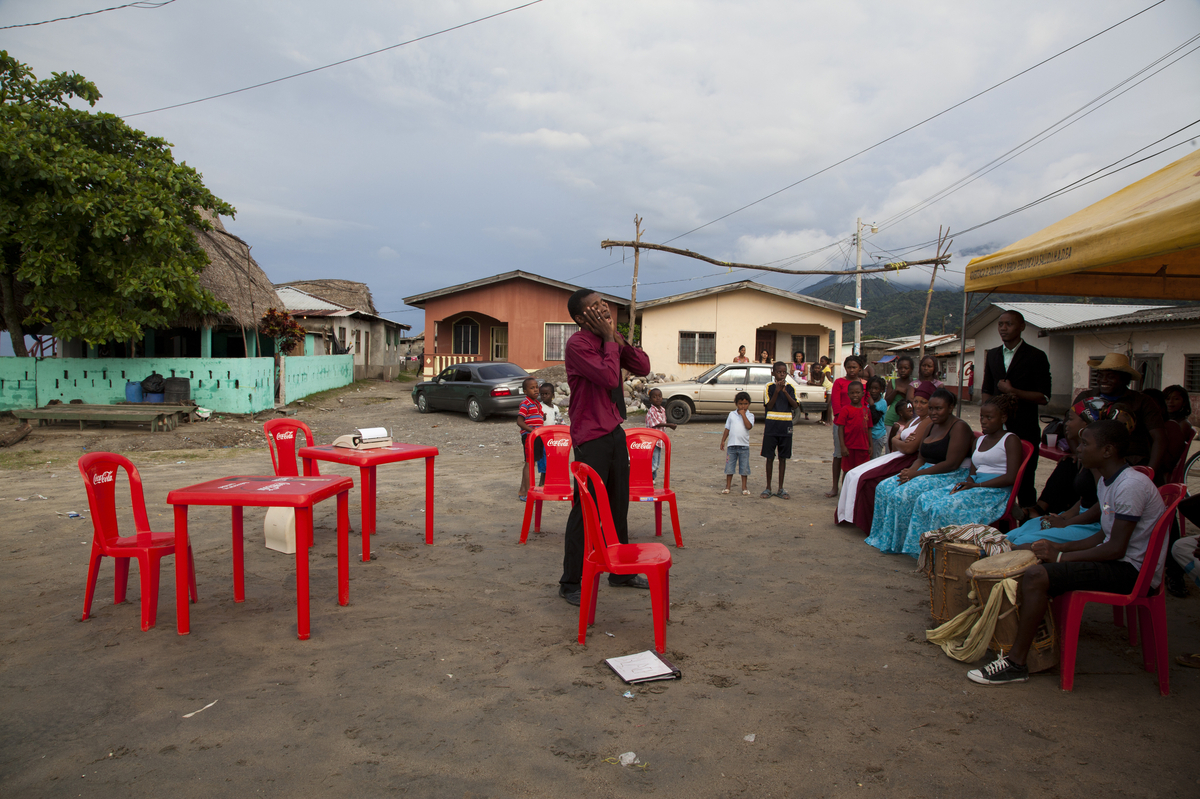 A community theater group performs at a festival Jan. 25 in Corozal. The theater group uses traditional Garifuna music and culture in its productions to help teach about HIV prevention and stigma. 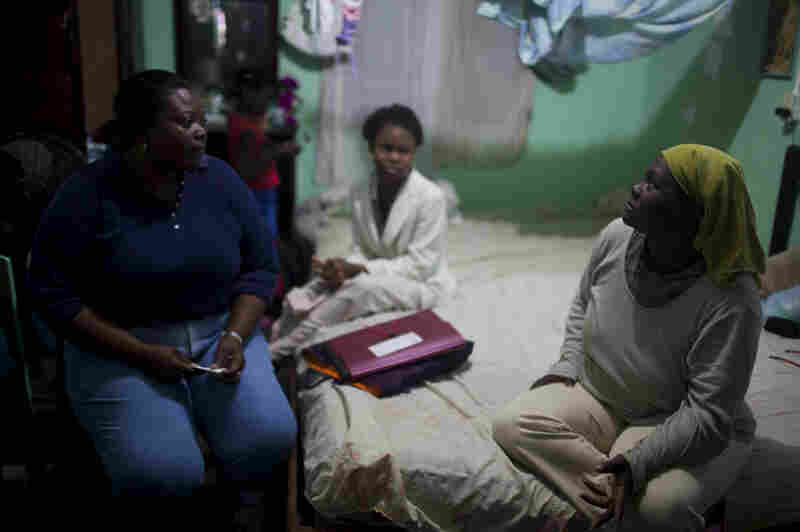 Carmen Suyapa (right) receives a visit from Anatolia Ramirez on Jan. 21 in La Ceiba, Honduras. Carmen felt so rejected by her family after she was diagnosed with HIV that she briefly considered committing suicide. David Rochkind/Pulitzer Center hide caption 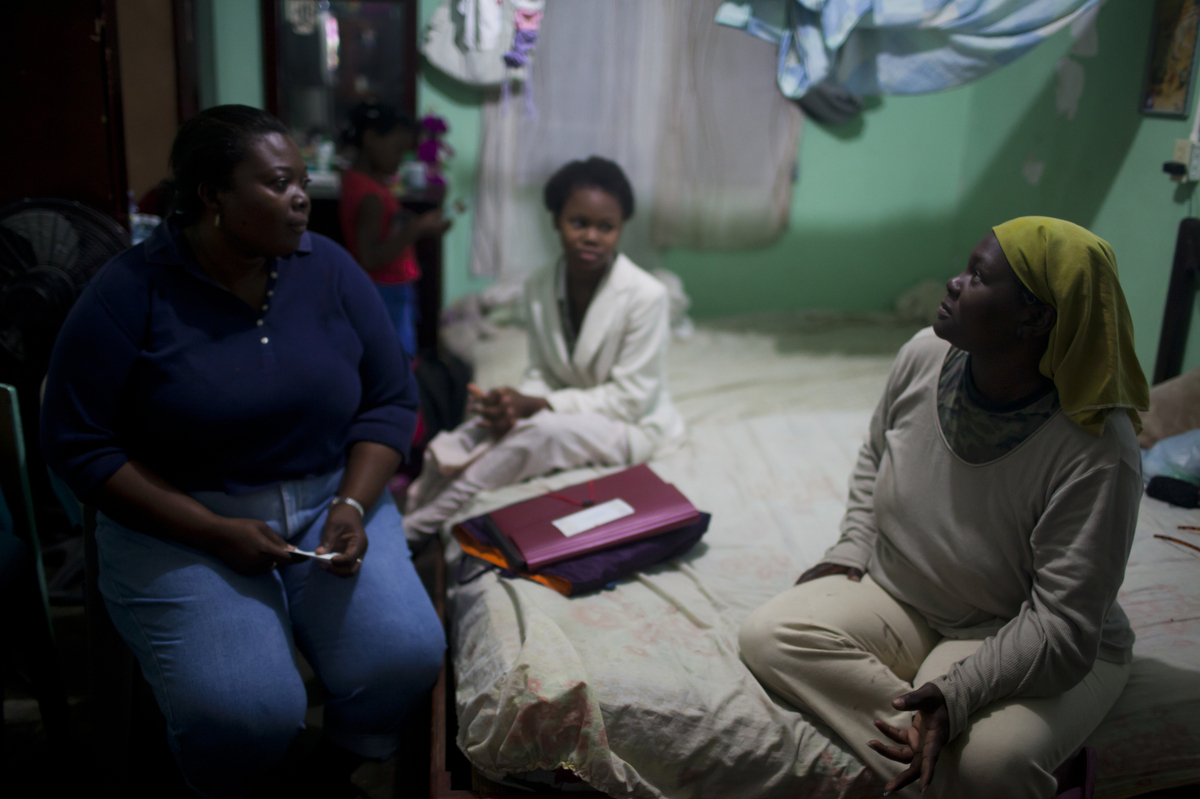 Carmen Suyapa (right) receives a visit from Anatolia Ramirez on Jan. 21 in La Ceiba, Honduras. Carmen felt so rejected by her family after she was diagnosed with HIV that she briefly considered committing suicide.

In the village of Corozal in Honduras, men ready boats for fishing excursions and boys play soccer on a beach lined with thatched huts.

On a sandy lot next to the town's main street, two teenage boys begin playing drums while women sing. For centuries, this has been the signature sound of celebration for the Garifuna, an Afro-Caribbean people on the Atlantic coast of Central America. Now this music has an additional purpose: to prevent HIV.

As people arrive to hear the drumming, the musicians become actors in a play. The plot centers on a court case: The Garifuna are putting HIV itself on trial.

"The virus is orphaning children and tearing apart families," Eduardo Marcial Garcia, who plays the prosecutor, says in Spanish.

According to the U.S. Centers for Disease Control and Prevention, 4.5 percent of the Honduran Garifuna population has HIV — a proportion that is five times as high as in the country as a whole, according to the government. No nation in the Western Hemisphere has a rate that high.

Local Garifuna woman Carmen Suyapa contracted the virus from the father of her two daughters. He hadn't told her he was HIV-positive. She didn't know medicine existed and thought she was destined to die. Family members stayed away from her because she was sick, and she says she couldn't get a job because she had the virus.

Suyapa, who is now 37, was so distraught, she says she almost killed herself and her baby. Instead she left the father, and luckily her daughters didn't contract HIV. But she waited years to seek medical treatment.

Suyapa hid away, she says, because she couldn't bear other people laughing at her.

Not far away, a state-funded HIV clinic provides access to doctors and anti-AIDS medicine at almost no cost.

Factors contributing to the high HIV rate include a lack of education, widespread poverty and heavy migration, as men tend to find work on cruise ships and fishing boats that frequent ports rife with the virus. Locals also say HIV spreads because it can be culturally acceptable to have sex with multiple partners.

Dr. Mercy Garcia says people deny having the problem because they are afraid of being judged. The key, he says, is to provide education that helps change behavior.

Ana Vilma Silva is a 37-year-old Garifuna woman who participates in theater groups. She and one of her three daughters were both diagnosed with the virus 11 years ago.

"HIV is a major problem because some people don't understand it," she says. "Some young people think HIV doesn't even exist."

She says theater and other community groups help address this because they engage people more than pamphlets or books do. Garcia, the actor portraying the prosecutor, says there's proof of that. He says his performances have inspired more young people to join the theater group, which has 30 members. He says they now lead safer lives.

About 220 miles away, in the capital of Tegucigalpa, health ministry officials are eager for data on the effectiveness of this approach. They are completing a new study with the CDC on HIV prevalence among the Garifuna. If the rate falls from 4.5 percent, it could indicate that educational programs like theater groups are working. The U.S. Agency for International Development and the Honduran government have both funded theater groups including the one in Corozal.

Kellie Stewart, director of the Honduras health office for USAID, says though she can't speak for the CDC study, she has seen an improvement.

"We have observed a substantial decline in the number of positive HIV tests among beneficiaries of USAID's program in the community," she says.

Back in Corozal, the theater troupe is finishing its play. The prosecutor and defense attorney have given their arguments in the court case against HIV. But narrator Yilian David says the court decides there's no verdict. The reason? HIV is still a major problem, she says. The Garifuna can't declare victory yet.