Accessibility links
Versailles Gets Spiffed-Up On Its Day Off Nearly 7 million people visit the Chateau at Versailles a year. But one day a week, it's closed. That's a spa day of sorts, when conservation work and cleaning takes place at the Grande Dame of France royal residences. The hardwood floors alone require nearly 1,000 gallons of wax a year. 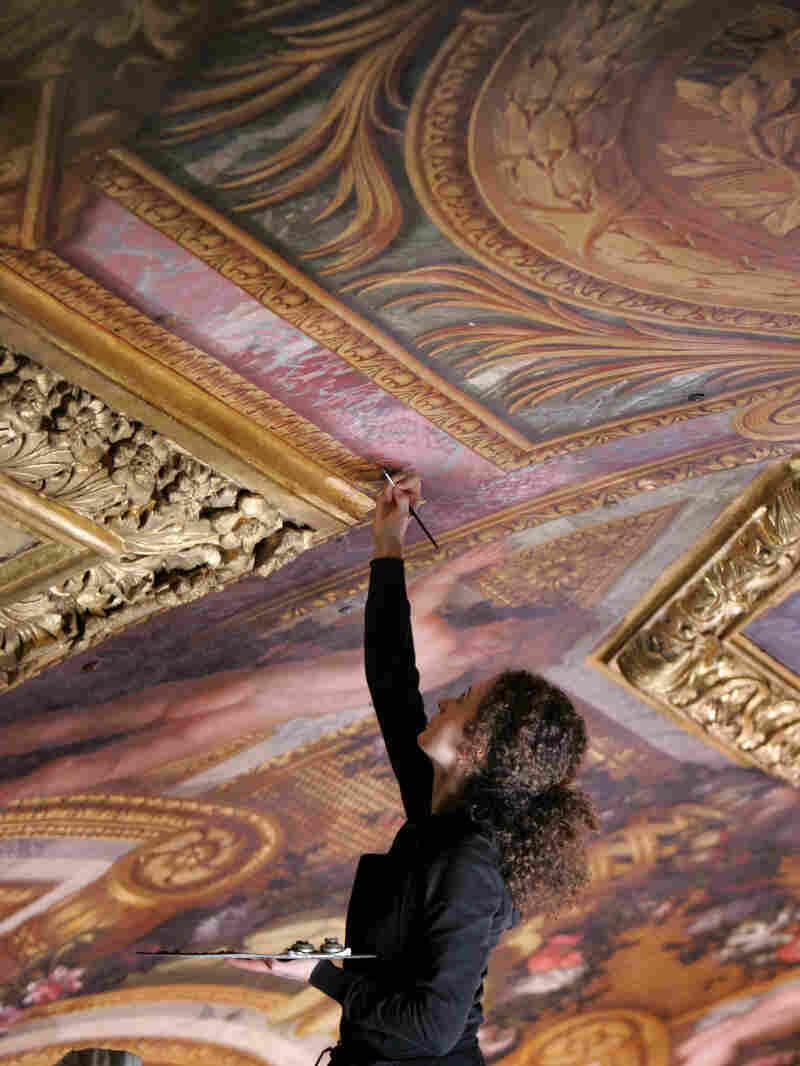 Restorer Nicoletta Rinaldi works on the ceiling of the Hall of Mirrors at the Versailles Palace, west of Paris, in 2007. Remy de la Mauviniere/AP hide caption 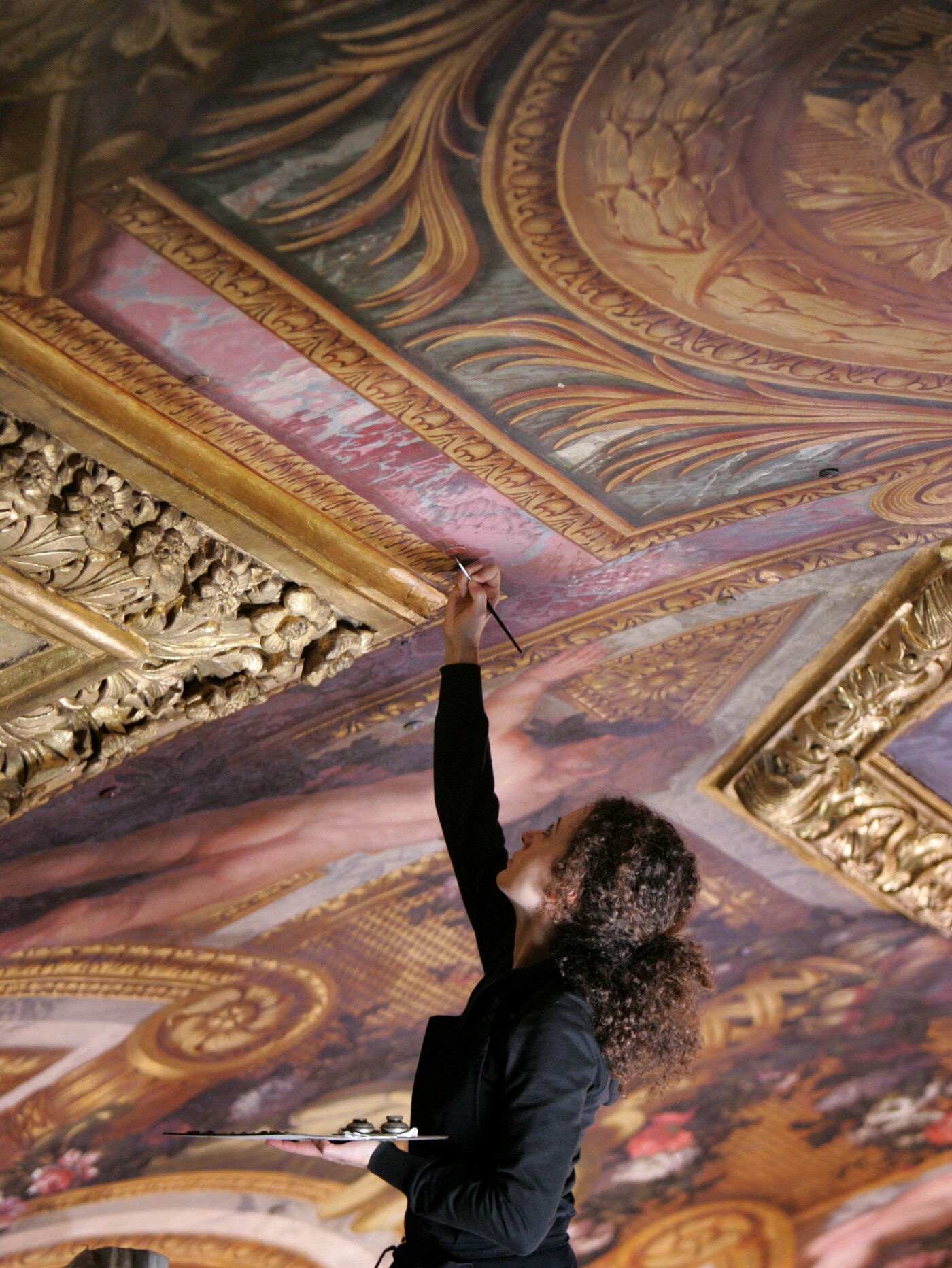 Restorer Nicoletta Rinaldi works on the ceiling of the Hall of Mirrors at the Versailles Palace, west of Paris, in 2007.

With nearly 7 million visitors a year, the Chateau of Versailles in France is one of the most popular tourist attractions in the world. But one day a week, it's closed.

So what happens at Versailles on its day off? A spa day, of sorts — involving cleaning and conservation work.

Catherine Pegard, president of Versailles, says the palace is always caught between history and modernity.

"There's always an equilibrium to be struck between preserving the history of the palace and operating in the 21st century, a constant pull between conservation and creation," she says. "But the better the conservation is, the more creative we can be."

A lot of conservation takes place on Mondays. We get to climb some scaffolding to the top of a room, where artists are dabbing at a magnificent ceiling fresco with tiny paintbrushes.

The team is removing cracks in the ceiling of the Salon d'Abondance. The last restoration of this ceiling took place 65 years ago, and head artisan Xavier Beugnot says the team is having a hard time removing the previous paint job. He says reversibility is a core principal of restoration work these days.

"Our work has to look good but it must be reversible. It must come off easily some day in the future when better methods are available," he explains.

Louis XIII built Versailles as his hunting lodge in 1624. Louis XIV loved spending time there so much that in 1680 he moved his entire court and government to Versailles and continued building. The grandiose chateau became the official residence of French kings and the seat of government until the revolution brought down the monarchy in 1789. 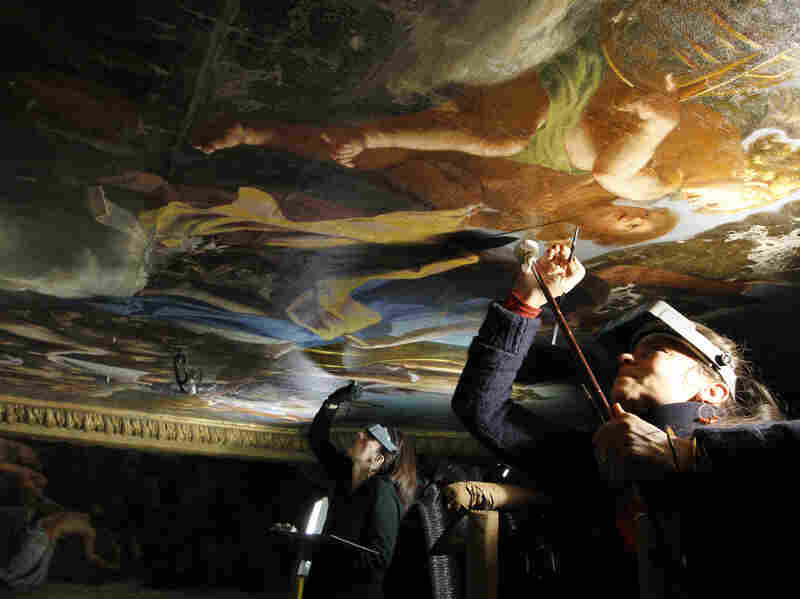 Restorers work on a painting in the Mercury drawing room in 2011. A lot of conservation takes place on Mondays, the only day the palace is closed. Francois Guillot/AFP/Getty Images hide caption 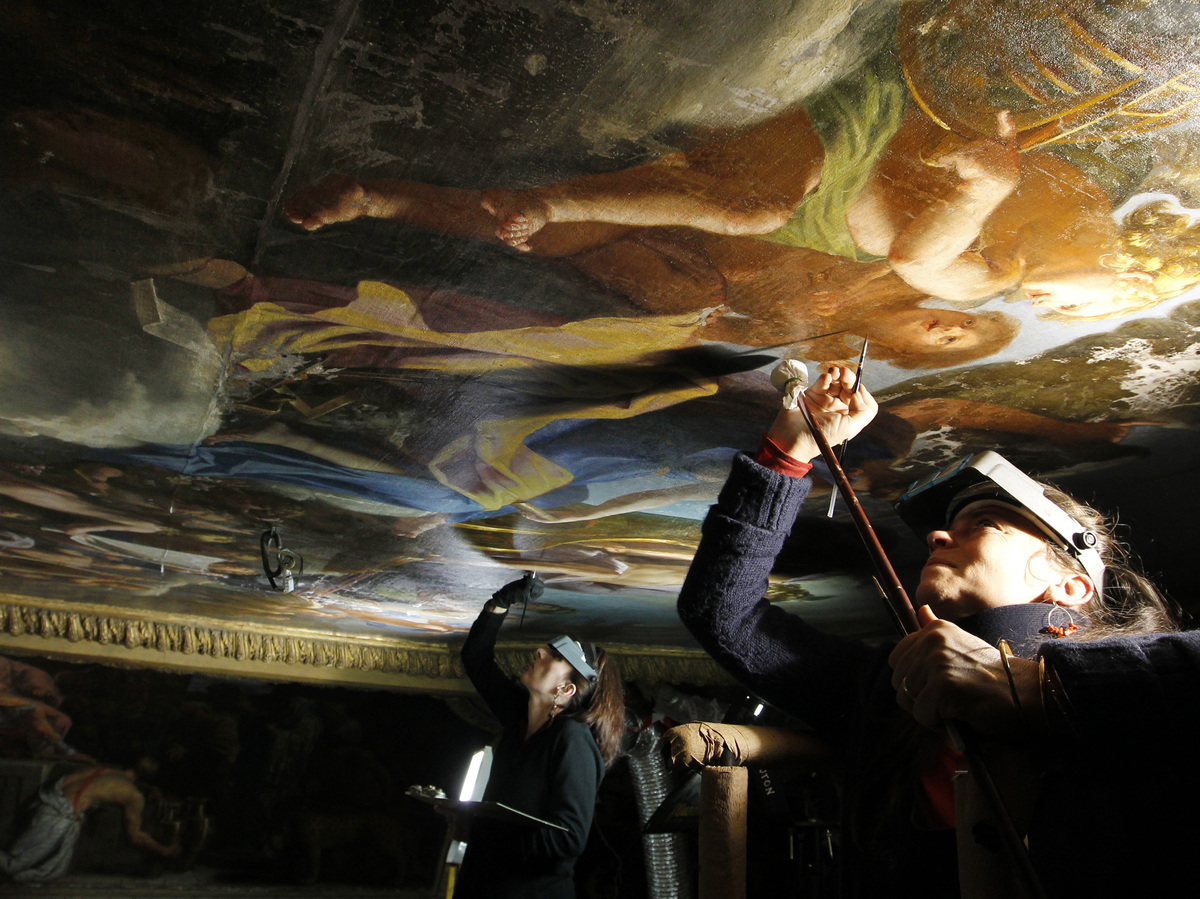 Restorers work on a painting in the Mercury drawing room in 2011. A lot of conservation takes place on Mondays, the only day the palace is closed.

As we climb down from the ceiling, beautiful music wafts through the palace. Someone is practicing on Louis XIV's organ. I stand at a balcony overlooking the Sun King's ornate gold chapel and its massive organ pipes. Versailles curator Olivier Josse says Louis XIV also stood in this spot.

"He came every morning to the Mass here, at 10. As you can see, the music is just in front of him because music was very, very important for the king," Josse says.

As you might imagine, closing day is also housekeeping day at Versailles. And with 2,300 rooms, there is plenty to do. The hardwood floors alone require nearly 1,000 gallons of wax a year.

Palace historian Beatrix Saule's vast knowledge about Versailles is rivaled only by her giant set of keys to the chateau.

Saule leads us into the bedroom of Marie Antoinette, the wife of Louis XVI, the final monarch to live at Versailles. We admire the furnishings, including a bed that comes up to my waist.

And then Saule drops a bombshell.

Marie Antoinette's heavy brocade bedspread was found in New York in the 1960s. As it turns out, tracking down the chateau's furnishings is a major task of every Versailles curator.

On Oct. 5, 1789, a mob chased the court of Louis XVI from the palace, which was then emptied. Saule says Versailles' furnishings are still spread all over the world, so the staff is constantly scouring estate sales and auctions everywhere.

"It's like a police inquiry. We are Sherlock Holmes," she says. "We are obliged to follow the pieces from the sale at the time of the revolution to today and see is there something which is in a place in the world and is it possible for us to buy it."

Marie Antoinette's writing desk was recently discovered. Josse and Saule worked together to get it back.

"It was in a private house, and we have to buy it. So I tried to find some money to buy it. And we found two donors who helped us to have it again in Versailles," Josse says.

Donors are key to such acquisitions — that little writing desk cost $9 million to buy back. Americans are top contributors to Versailles. It began with Nelson Rockefeller, who helped out between the world wars, when France didn't have the means to keep the palace up. The Germans actually protected Versailles during the occupation of France because the palace is a shrine of German history. It was there, in the Hall of Mirrors, where Otto von Bismarck proclaimed the German Empire in 1871.

Google is Versailles' newest corporate star. The Internet company financed and helped build an impressive virtual 3-D exhibit that now kicks off every tourist's visit to the Sun King's chateau.