Accessibility links
Hunting For Secrets In 'The Shining's' Room 237 A new documentary looks at obsessive fans of Stanley Kubrick's 1980 horror film The Shining, starring Jack Nicholson and Shelley Duvall. These fanatics look for hidden meanings in the movie, and while some of their theories sound outrageous, it's too simple to call such thinking deranged. 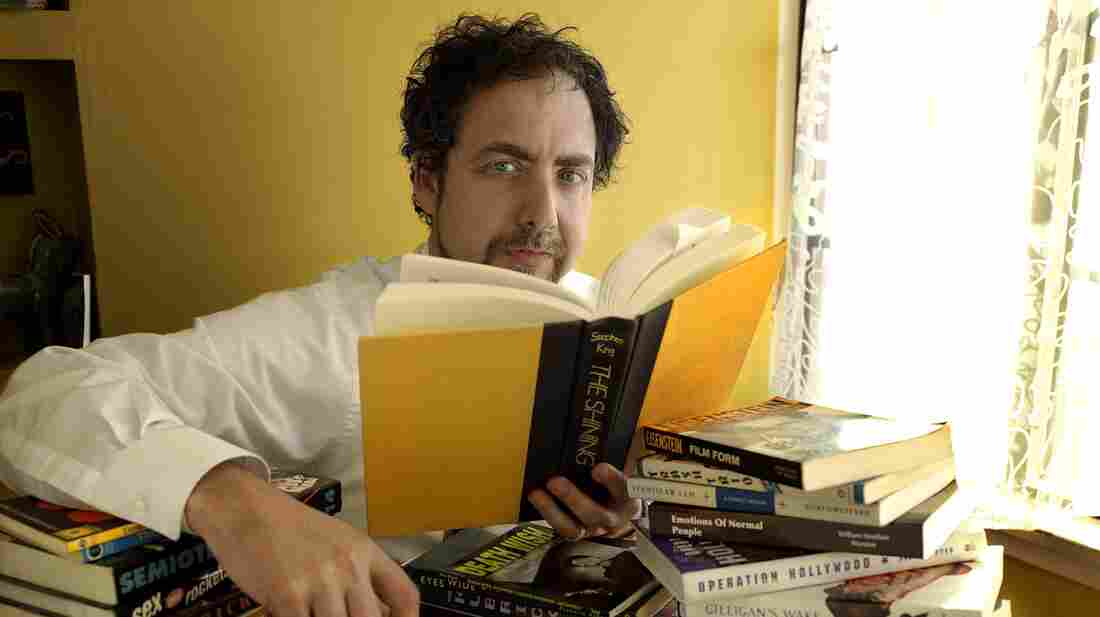 Awhile back, I went to the Los Angeles County Museum of Art to see its show on filmmaker Stanley Kubrick. It was jammed with visitors poring over his letters, eyeing the dresses worn by the spooky twins in The Shining, and posing for photos in front of the sexy-futuristic decor of the Korova Milk Bar from A Clockwork Orange.

Although I was surprised at the crowd, I shouldn't have been. Kubrick is one of the rare dead directors — Hitchcock is another — whose work is still watched by those younger than 40. And he maintains a lofty reputation as a reclusive genius.

When fans talk about his work, you always hear one word: "perfectionism." Here was a director, the story goes, who thought about every single detail in every single frame. Legend had it that Kubrick examined every single print of his movies before he let it be released.

In fact, it's not true that Kubrick always insisted on perfection. He shot his Vietnam movie, Full Metal Jacket, in England, which didn't look remotely like Southeast Asia. Still, his obsessive attention to detail has long made him an idol of cultists who scrutinize his movies for secret messages hidden in the wallpaper.

Such fanatics are the subject of Rodney Ascher's Room 237, a very enjoyable documentary about five Kubrickians obsessed with wildly different hidden meanings in his 1980 film The Shining. Where you may think it's merely a horror story — remember that blood flooding out of the elevator? — these devotees argue that Kubrick's movie is really about more than a writer going homicidally bonkers.

For one, it's about the genocide against Native Americans; for another, it's about the Holocaust; yet another says the film is Kubrick's admission that he helped fake footage of the Apollo 11 moon landing.

It's too simple to call such thinking deranged. Kubrick really was the kind of artist who planted echoes and allusions in his films — he wanted us to pay devout attention.

By way of evidence, these folks point to all sorts of "clues," from the presence in several shots of the Calumet Baking Powder logo — with its distinctive tribal chief in a feathered headdress — to apparent continuity errors involving misplaced chairs that, this being Kubrick, can't possibly be mere errors. They're deliberate.

In one clip, the fake-moon-landing guy discusses an "aha" Moment. Listening to this man talk, it's hard not to think that here are obviously intelligent people with too much time on their hands. The obsessions with sweaters and moving chairs bespeak some sort of interpretive disease in which one ignores most of a movie — the plot, the characters, the setting, etc. — in order to claim that what matters is actually found in a poster hanging in the background. If Stanley Kubrick — a hugely powerful director — wanted to make a movie about the slaughter of Native Americans, why didn't he just make it rather than hide his secret meaning in baking-powder labels that almost nobody would notice?

Still, it's too simple to call such thinking deranged. Kubrick really was the kind of artist who planted echoes and allusions in his films — he wanted us to pay devout attention. Besides, a fixation on small things isn't aberrant. Since Freud and Marx, it's become habitual to look for the symptoms of the true meaning hiding beneath the obvious surface — you know, how a slip of the tongue can reveal far more than what the speaker thinks he's saying.

Of course, this brand of interpretation is an invitation to go off the deep end. In many ways, these Kubrick obsessives share a mindset with paranoiacs and conspiracy theorists, who also find patterns in details that most of us find minor if not irrelevant. Such thinking isn't wholly imaginary. It usually starts with real, teasing facts — the image on Danny's sweater, say, or the conflicting forensic evidence from the Sept. 11 attacks — then weaves them into a grand theory, usually ignoring or bending other facts so that everything clicks together in a satisfying way. A clear meaning is found in what would otherwise be the disturbing disorder of life.

Now, there's obviously far less at stake in Kubrick's film than in the Kennedy assassination. Which is one reason why Room 237 is so much fun to watch. It gives us a safe version of the paranoid search for meaning to which we're all susceptible.

And even as we laugh, some of the commentators notice details that really are quite striking, like the odd make of Nicholson's typewriter — a German model, which serves the Holocaust theory — or the skiing poster in the background that looks like a minotaur — this, in a movie that ends within a maze.

While some of their interpretations strike me as nutty, others are quite plausible. Room 237 shows us that Kubrick really does load up the The Shining with Native American imagery. And surely this has to mean something. Or does it?