Accessibility links
Cyprus' Crisis Frames Eurozone As 'Work In Progress' New restrictions on big depositors are controversial, and there's no consensus on the efficacy of the country's strategy. Besides affecting Cyprus' economy, the new measures could become a template for other eurozone countries. Selective restrictions might create a tiered system within the bloc. 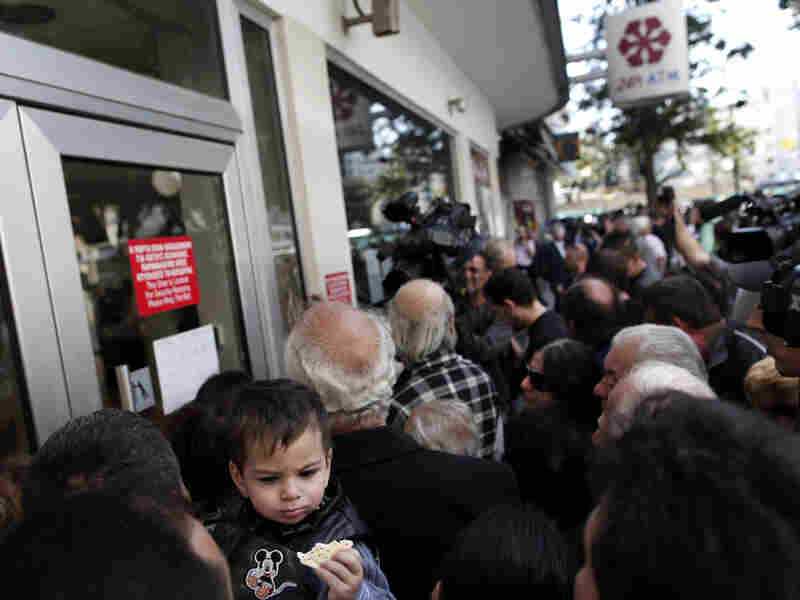 Banks in Cyprus reopened to customers for the first time in nearly two weeks Thursday, albeit with strict restrictions. Petros Giannakouris/AP hide caption 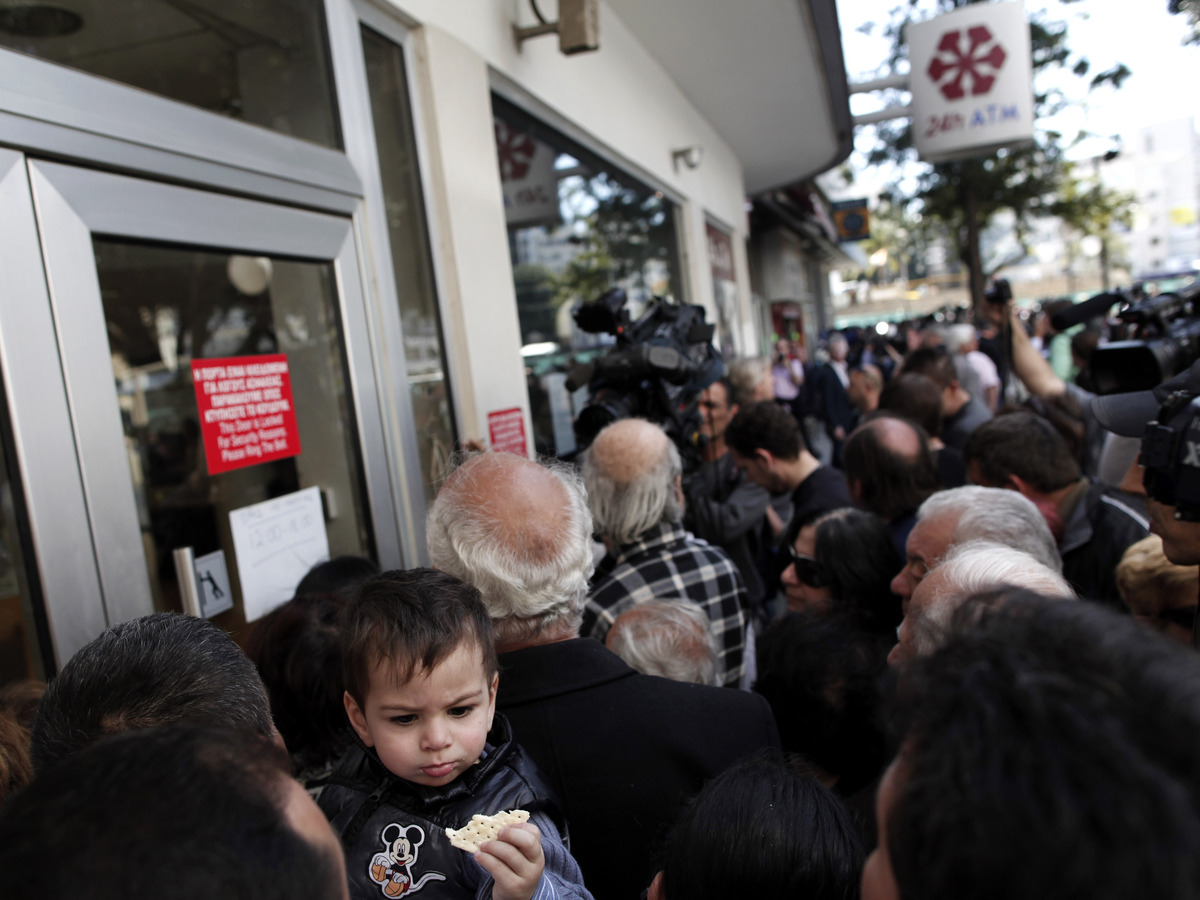 Banks in Cyprus reopened to customers for the first time in nearly two weeks Thursday, albeit with strict restrictions.

On the second day since Cyprus reopened its banks, depositors continue to face restrictions on getting at their money. ATM withdrawals are limited to 300 euros a day, and there are limits on how much cash travelers can take abroad.

The controls are designed to keep worried depositors from draining the banks and moving money out of the country. But those so-called "capital controls" are controversial, as is the new strategy the European Union used to resolve the banking crisis.

The final Cyprus deal protected bank customers with up to 100,000 euros in their accounts. But it's imposing large losses of as much as 40 percent on many big depositors. Jacob Kirkegaard of the Peterson Institute for International Economics says it's bad news for big depositors but a positive precedent for euro-area taxpayers.

"They are no longer on the hook for bailing out bank shareholders and bank bondholders and individual failing banks," he says.

That's what happened early in the EU banking crisis. In countries such as Ireland, the government, and ultimately taxpayers, assumed the losses of the country's failing banks. If the Cyprus deal becomes a template for the future, as some EU officials have suggested it will, it means investors and big depositors beware.

"Uninsured depositors or corporations, typically, are now going to have to pay more attention to the health of the bank that they put their money in, but I think, you know, welcome to capitalism," Kirkegaard says.

He acknowledges that there's a short-term downside: Weaker banks will have a harder time attracting investors and big depositors, undermining them even further.

While Kirkegaard sees the Cyprus outcome overall as hopeful, Harvard economist Ken Rogoff isn't so sure. He says EU officials are doing things they said they'd never do. First, they are inflicting pain on big depositors.

"Second, they're having to put controls on money flowing out of Cyprus. ... It's a big, drastic step," he says.

What If You Couldn't Take Your Money To Another State?

Jens Nordvig, the global head of currency strategy at Nomura Securities, says "something that people thought was impossible has actually happened." He says the Cyprus deal calls into question whether the euro is really a common currency.

"Obviously, for people who have deposits in eurozone banks — if you have to worry about whether you can actually get your money out, whether euros you have in Cyprus and in other countries are the same as the euros they have in Germany and France, that can create a level of uncertainty that's potentially quite disturbing," he says.

Despite the potential uncertainty, world financial markets have reacted quite calmly to the Cyprus event. But Nordvig says because of the crisis, EU banks are paying more to attract funds from investors and depositors. Those higher costs will be passed on to both private and business borrowers.

"That obviously has implications for the economy," he says.

That's unfortunate, since one thing that could ease the situation is economic growth in the EU. But given government austerity and the hits to credit and confidence from the banking crisis, it's hard to see how growth can get traction.

Rogoff, the Harvard economist, says what's clear is that the euro project remains a "work in progress."

"I still think that at the end of this, there'll be a core eurozone, but there may be some breakup, with some periphery countries having some kind of junior relationship with maybe capital controls," he says.

Those capital controls, like the ones in Cyprus, would aim to protect their economies. Rogoff says it could be a long time before they became full members of the eurozone again.