Accessibility links
Thousands Trek To New Mexico Chapel On Good Friday Every year thousands of people make a pilgrimage down the state highway toward the Catholic shrine in Chimayo, N.M. They gather there to pray for forgiveness and healing. 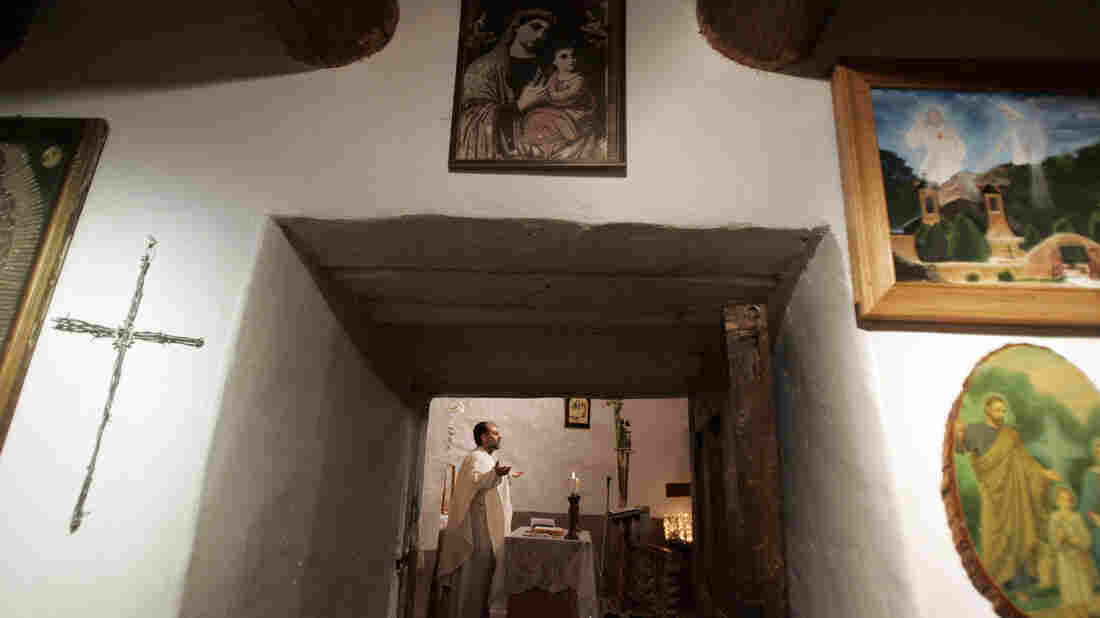 The Rev. Julio Gonzalez leads Easter Mass at El Santuario de Chimayo in 2007. Thousands of visitors make a pilgrimage to visit the small chapel annually every Easter weekend. Many people believe that the dirt inside the chapel has healing powers. Jessica Rinaldi/Reuters/Landov hide caption 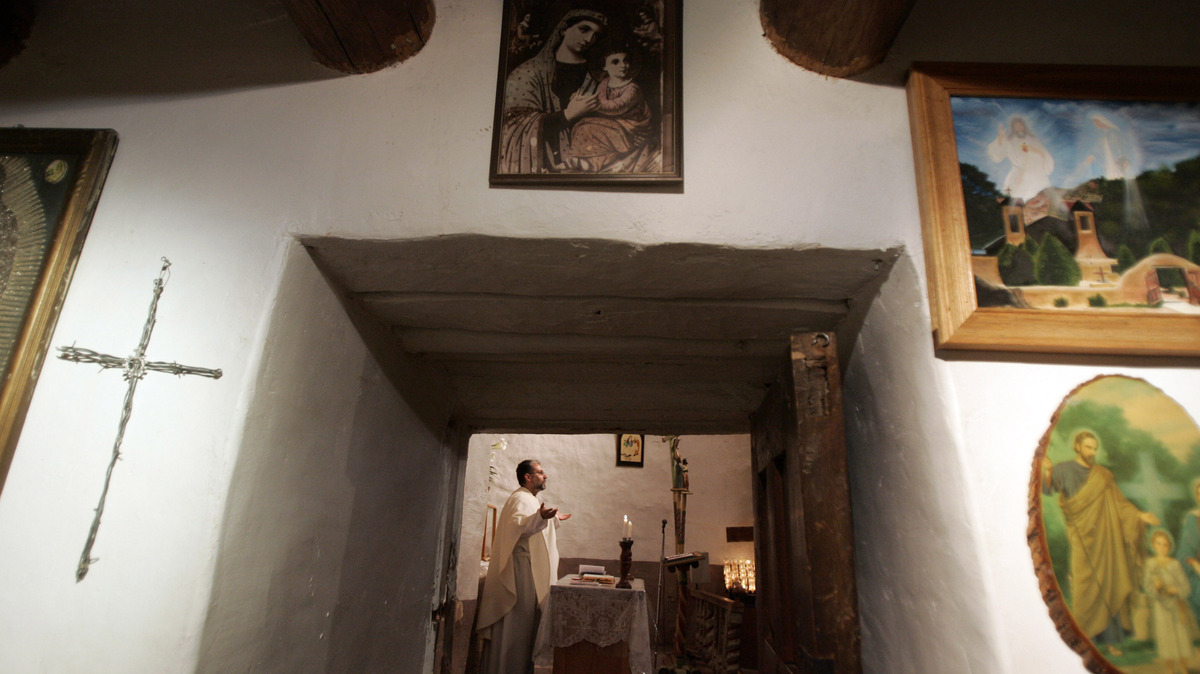 The Rev. Julio Gonzalez leads Easter Mass at El Santuario de Chimayo in 2007. Thousands of visitors make a pilgrimage to visit the small chapel annually every Easter weekend. Many people believe that the dirt inside the chapel has healing powers.

Driving in northern New Mexico requires special caution on Good Friday. Tens of thousands of people — some walking all night — are converging on the village of Chimayo to pray inside a 200-year-old chapel before a carved wooden image of Jesus.

As it does every year, the highway department has put out portable toilets, orange barriers, and signs warning motorists of "Santuario walkers."

The man in the fluorescent orange shirt and striped sneakers, walking determinedly along the shoulder, is Rep. Ben Ray Lujan, a Democrat who represents this area. He started in Santa Fe. "I think all in all it's an 8 1/2- to nine-hour walk," he says.

Lujan is making the pilgrimage this year to honor his father, who died of cancer last year. Others trek to Chimayo to collect so-called sacred dirt beneath the chapel.

"There's been many people that have told stories how they've been healed in miraculous ways. That's why it's an important place to us here in New Mexico," he says.

New Mexico has been deeply, expressively Catholic ever since the conquistador Juan de Onate, accompanied by Franciscan missionaries, made his way along this same route 415 years ago. Today, this pilgrimage looks more like something you'd find in Spain or Latin America.

The faithful — with rucksacks and water bottles — hike beside sand hills freckled with pinyon pine and juniper, with the snowcapped Sangre de Cristos in the distance.

A Navajo woman named Betty Box, a casino worker from Colorado wearing a straw hat and carrying a rosary, takes a break beside the road. She says she's praying for the world and for the people she met on this day.

"People always come up to us, before we start the walk, they know we do it," she says. "So, they say, 'Can you pray for my dad? He's really sick.' Or 'My child's having problems.' "

For the town of Chimayo, the pilgrims who flock here during Holy Week — who buy a tamale and maybe a crucifix — are the biggest business all year.

"We get extremely busy here in this little store," says Raymond Bal, who runs the Vigil Store, right next to the church. The store was opened by his grandparents and sells red chili, souvenirs and Catholic items. 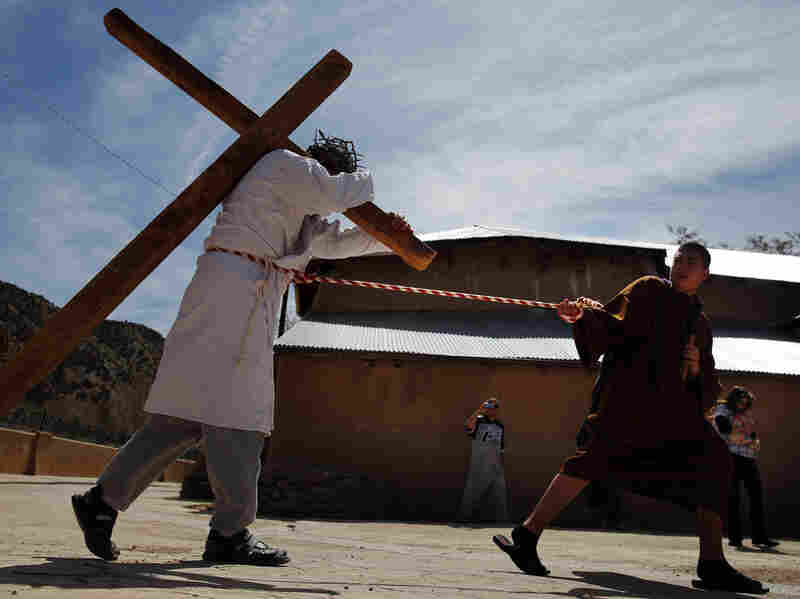 Students playing the roles of Roman soldiers lead a man playing the role of Jesus during a re-enactment of the Stations of the Cross at the Sanctuary of Chimayo in New Mexico on Thursday. Brian Snyder/Reuters/Landov hide caption 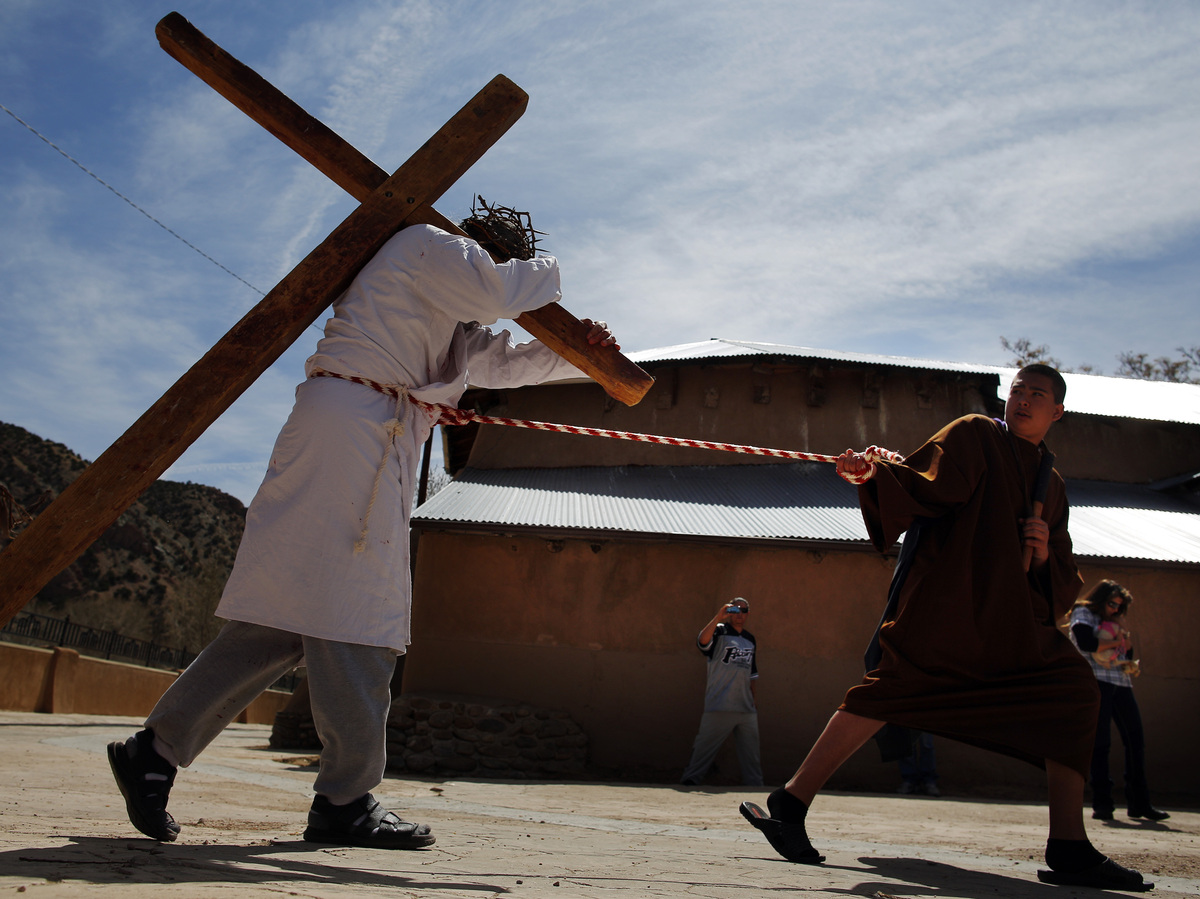 Students playing the roles of Roman soldiers lead a man playing the role of Jesus during a re-enactment of the Stations of the Cross at the Sanctuary of Chimayo in New Mexico on Thursday.

"What's moving for me is driving to work in the morning," Bal says. "I try to get here as early as I can. Because there have been people arriving all through dawn and early morning. They're deep in contemplation."

Then, as if on cue, four heavyset men wearing black T-shirts and black hoods, one of them dragging a cross, slowly make their way down the road.

All day, the plaza of the Santuario fills up with tired pilgrims at the end of their journey. Orlando Romero, a historian and columnist, rests on a bench with a tired but satisfied smile. He thinks he walked a little more than eight miles.

"I'm really amazed that people walk all the way from Albuquerque, from Taos, from Truchas, from Cordova," he says. "They come from everywhere to this sacred place. It's like the Lourdes of the Southwest, aptly named."

Why does Romero do it? "Blessings for my family, the blessings that this place provides," he says, adding that he he has been making this pilgrimage all his life.

Asked his age, he says 66 or 67, he's not sure: "Age means nothing to me as long as I can fly-fish and make this pilgrimage."

The audio of this story, as did a previous Web version, incorrectly identifies historian and columnist Orlando Romero as Rolando Romero.