Accessibility links
Interview: Debbie Reynolds' New Memoir 'Unsinkable' Debbie Reynolds has been a movie star for more than 60 years. Her new memoir, Unsinkable, looks back on her decades in the business, her family and her children — and a naughty story or two about drunken Hollywood greats. 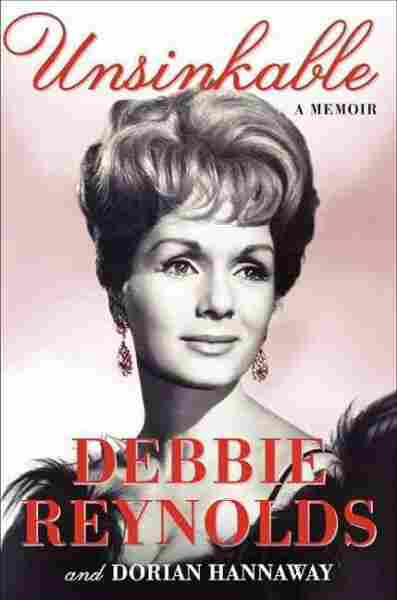 by Debbie Reynolds and Dorian Hannaway

Debbie Reynolds has been in show business for more than 60 years — beginning as an ingenue chirping a novelty tune called "Aba Daba Honeymoon" in one of her first films, a Jane Powell/Ricardo Montalban vehicle called Two Weeks With Love. That was 1950. Today, she's indisputably a grand dame of show business, working with names like Matt Damon and Michael Douglas.

Reynolds has made some legendary films along the way, including Singin' in the Rain, with Gene Kelly and Donald O'Connor, and big hits, like The Unsinkable Molly Brown, for which she was nominated for an Academy Award. Her foot- and handprints are preserved at Grauman's Chinese Theatre.

She's had three marriages that gave her a great son and daughter, but as she says in her new book, she's "kissed a lot of frogs," and she knows what it's like to have your personal life thrown open in the headlines like a cheap suitcase — most famously in 1959, when her husband, crooner Eddie Fisher, left her for her friend Elizabeth Taylor. The book is called Unsinkable, and Reynolds looks back with a laugh when discussing Fisher and Taylor with NPR's Scott Simon. "Elizabeth fell in love with ... Richard Burton, and I warned Eddie that she'd kick him out in a year and a half — and that's exactly what happened, which gave me at least a little comfort."

Reynolds says she knew Taylor's relationship with Fisher would never work out. "He's not a strong enough personality for Elizabeth, who preferred her men to be, well, Richard Burton," she says. Fisher, she says, "lucked out" for the year and a half he spent with Taylor. And she eventually patched up her friendship with Taylor, after the two of them found themselves on the same cruise ship. "We decided, being bright girls ... we would get over the problems that existed, and we sent each other a note saying, let's move on with our life, and let's get onto the happy side. So we did, on that trip."

Moving on to her film work, Reynolds recalls that the shoot for Singin' in the Rain was exceptionally difficult because Kelly and O'Connor were such talented dancers. "And I had to learn all of that in six months, and I had never danced before," she says. "So I had to keep up with the boys, but I learned a great deal from Mr. Kelly." Fred Astaire helped, too — and Reynolds recalls him as "the sweetest man, other than Jimmy Stewart. I was crying under the piano on one of my breaks, my feet were killing me and my back was like it was broken — after all, I was only 17 — and Fred Astaire came by and he reached down, and he said, 'Now, who is that?' " Reynolds recalls that Astaire encouraged her not to quit. "And he invited me in to watch him rehearse — nobody got to watch him dance, and he let me watch him until he was just red in the face, and it showed me, even the greats find it hard to be really excellent, but you have to keep striving." 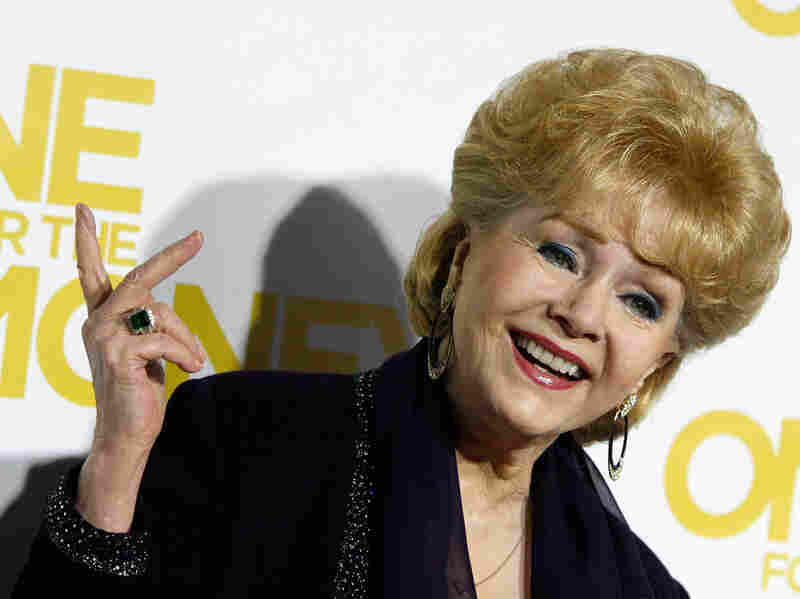 Reynolds first captured the public imagination with "Aba Daba Honeymoon," from Two Weeks With Love; she says the money she made from that movie — $1,500 — seemed like a fortune at the time. Legendary choreographer Busby Berkeley worked on the picture, "and he would drink a little bit, to say the least," Reynolds remembers. "He'd shoot these wonderful shots where they'd put him on a camera and send him 100 feet in the air, and they would tie him on, because he often fell off, and of course almost killed himself. But he'd get back up and have another bottle, and get back up, and so we finally learned to sing, we'd say, 'Somewhere there's Busby, how high the boom!' So it just became a joke, after a while. We didn't pay any attention to him. If he fell off, we'd just run forward and catch him."

A few years later, in 1955, she made a film with Frank Sinatra, called The Tender Trap, and Sinatra gave her some sage advice about her relationship with Fisher. "Frank Sinatra always gave people advice ... and he said, 'Now, I know you're engaged to Eddie, but I don't want you to marry a singer, because none of us are faithful, and he won't be, and I'm not. We're just awful,' he said, 'so don't do it.' And of course I didn't mind him, and I had a lot of problems because I didn't mind him, but Eddie and I were very young and very much in love at the time, but I guess he falls in and out of love."

I feel that I'm very fortunate, I have many good friends in my heart, I have my religion — and you can have whatever kind of religion; as long as you try the best you can, and you're a good person, that's all you can do."

Reynolds was not particularly lucky in love — after Fisher, she was married to two men, both wealthy, who essentially robbed her. She calls them "scoundrels" and says she doesn't really have an explanation for being taken in twice. "I really can't give you an answer, other than to say financially I'm very Victorian, I believe the man is supposed to run the business downtown, and the woman takes care of the family uptown. I always turned my money over to the husband. Shows you how dumb you are, and that's why I don't date or go out, and I would never marry again."

"I don't carry any guilt feelings," she continues. "I feel that I'm very fortunate, I have many good friends in my heart, I have my religion — and you can have whatever kind of religion; as long as you try the best you can, and you're a good person, that's all you can do."

If you want to see more of Debbie Reynolds, she's playing pianist Liberace's mother in a new biopic coming to HBO in May — Michael Douglas stars as the flamboyant musician and Matt Damon as his lover. "I'm working all the time; I've never stopped working," she says. "This is a really good picture. They dwell a lot on sex, which I didn't love, but it is part of any single man's life. But he was a great entertainer, great pianist, good friend and a wonderful person, and I enjoyed playing his mother," complete with Polish accent, "because I knew her in person, in life, and I put a prosthetic nose on so I could look just like her. I think everyone'll enjoy it. Just close your eyes at some scenes that are kinda sexy."

Read an excerpt of Unsinkable