Accessibility links
Gay Marriage And The Evolving Language Of Love During arguments this week at the Supreme Court over gay marriage, Justice Samuel Alito pointed out that the institution is "newer than cellphones or the Internet." That means the language used to describe same-sex relationships is new, too. And even linguists say they're still learning. 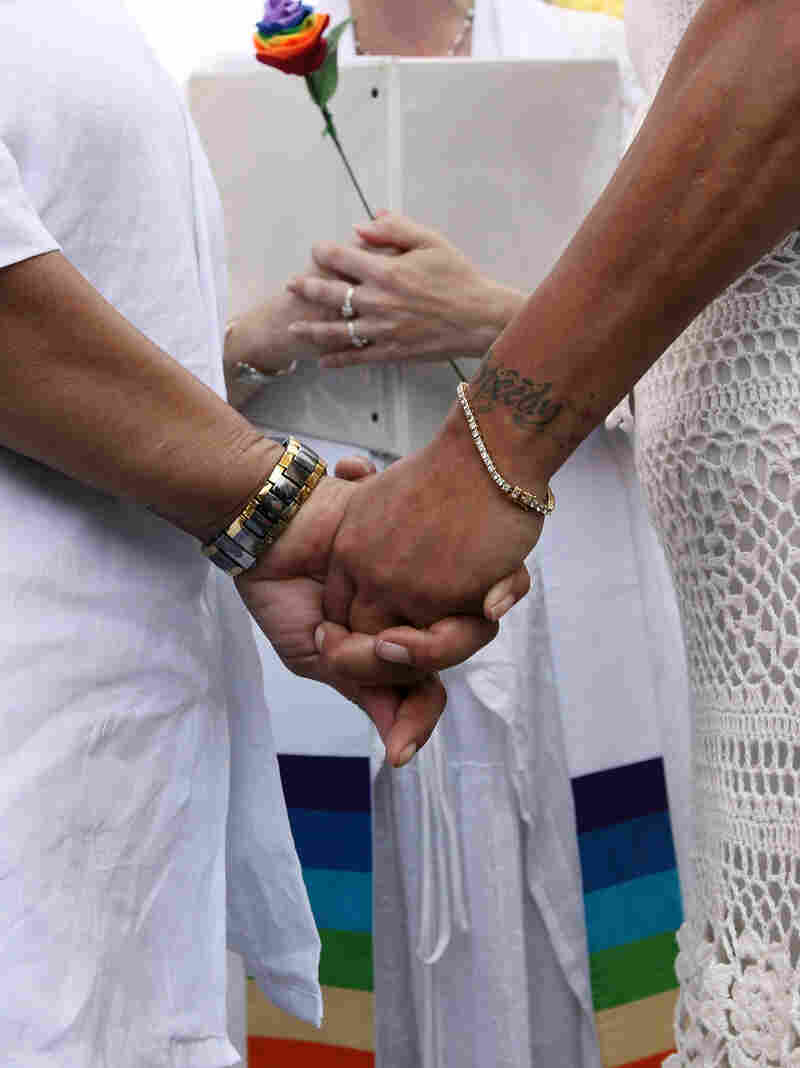 English-language experts say how gay couples refer to themselves, and how others refer to same-sex couples, continues to evolve. Mario Tama/Getty Images hide caption 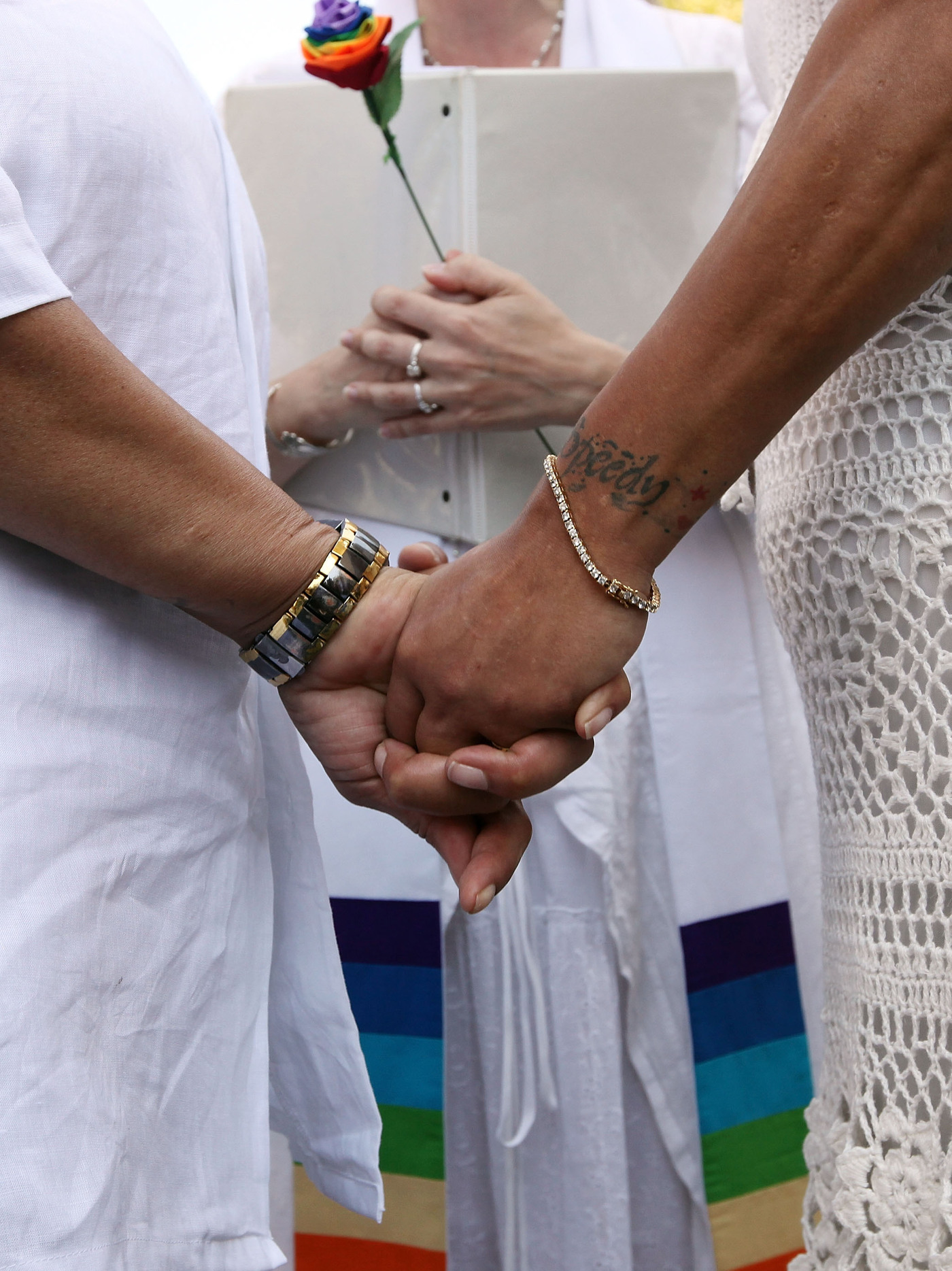 English-language experts say how gay couples refer to themselves, and how others refer to same-sex couples, continues to evolve.

In 1982, advice columnist Dear Abby published a letter from someone who'd just moved from a conservative Midwestern town to bohemian Portland, Ore.

Suddenly the advice seeker was interacting with gay couples and wanted to know: Should a letter be addressed to "Mr. John Doe and Friend?'"

Is it proper to say, "This is so-and-so and his lover"?

The writer went on: "'Would it be proper to introduce a gay couple as, 'Mr. Jones and his live-in friend, companion, or partner?' "

But 30 years later, straight and gay people are still struggling with the same questions.

"Each of these terms has its own problems," says Ben Zimmer, executive producer of the Visual Thesaurus and Vocabulary.com. "For instance, 'partner' sounds very official or contractual. 'Companion' sounds unromantic or even euphemistic. 'Lover' might just be too explicit. 'Boyfriend' and 'girlfriend' are inappropriate for a lot of people, unless they're a teenager."

When the love that dare not speak its name finally opens its mouth, people can get tripped up on the words.

Winnie Stachelberg, executive vice president at the liberal Center for American Progress, has been with the same woman for 25 years. She says she often uses the word "spouse," because it describes a relationship people understand.

"Friends of mine introduced themselves to a senator as 'partners,' and the senator immediately thought that they were business partners and made a comment, and then they had to quickly correct him," she says. "I remember that quite vividly."

'No, We're Both Husbands'

Now that some states allow gay people to marry, the words "husband" and "wife" are part of the lexicon.

The terms are unambiguous, but their usage is novel. And that sometimes catches people off guard.

Steve Kleinedler, executive editor of the American Heritage Dictionary, married his husband in 2004 and then suddenly lost him in a fatal accident five years later.

"The funeral director — very innocently and not meaning to offend at all ... was stymied by the form. She turned to me and says, 'Well, which one of you is the wife?' And you know, I kindly explained, 'No, we're both husbands,' " he says.

A few months earlier, Kleinedler had updated the definitions of "marriage," "husband" and "widower" to encompass same-sex couples. When the new edition of the dictionary came out, Kleinedler saw himself in those words.

Today, people may be taken aback when a man mentions his husband or a woman introduces her wife. But retired Rep. Barney Frank, D-Mass., who married his husband last year, believes the words will sound normal in no time.

"Maybe because I was in politics I've stayed in touch with a lot of younger people, but even among people my own age, I have not found that very widespread," Frank says. "The whole point of this is that we are not subject to the same gender roles. And by the way, these days, even wives aren't wives in that sense."

The Associated Press uses a manual called the AP Stylebook to spell out its rules and standards. Many news organizations, including NPR, turn to the stylebook for guidance.

Just last month, under pressure from outside groups, AP added a stylebook entry to say married same-sex couples should be called husbands or wives.

"Married couples are married couples, and so it's a natural progression," says David Minthorn, one of the stylebook's editors. "Same-sex marriage is much more frequent now than even 10 years ago, and we have to take account of this."

The AP Stylebook also has an entry for "widow" and "widower."

More evidence that the only constant in life is change.