Accessibility links
North Korea's Stepped-Up Rhetoric: Is It More Than Talk? With its missile units on standby and its hotlines cut to South Korea, North Korea continues to stoke tensions on the peninsula. Even China, North Korea's main ally, is now on board with sanctions. 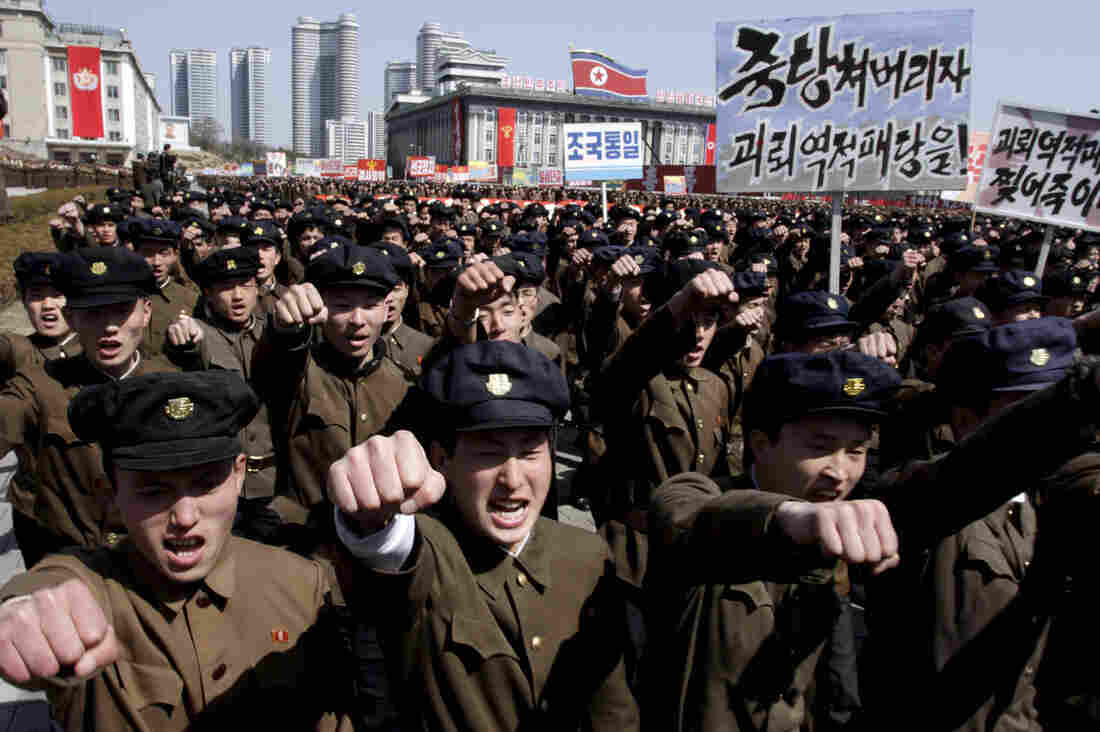 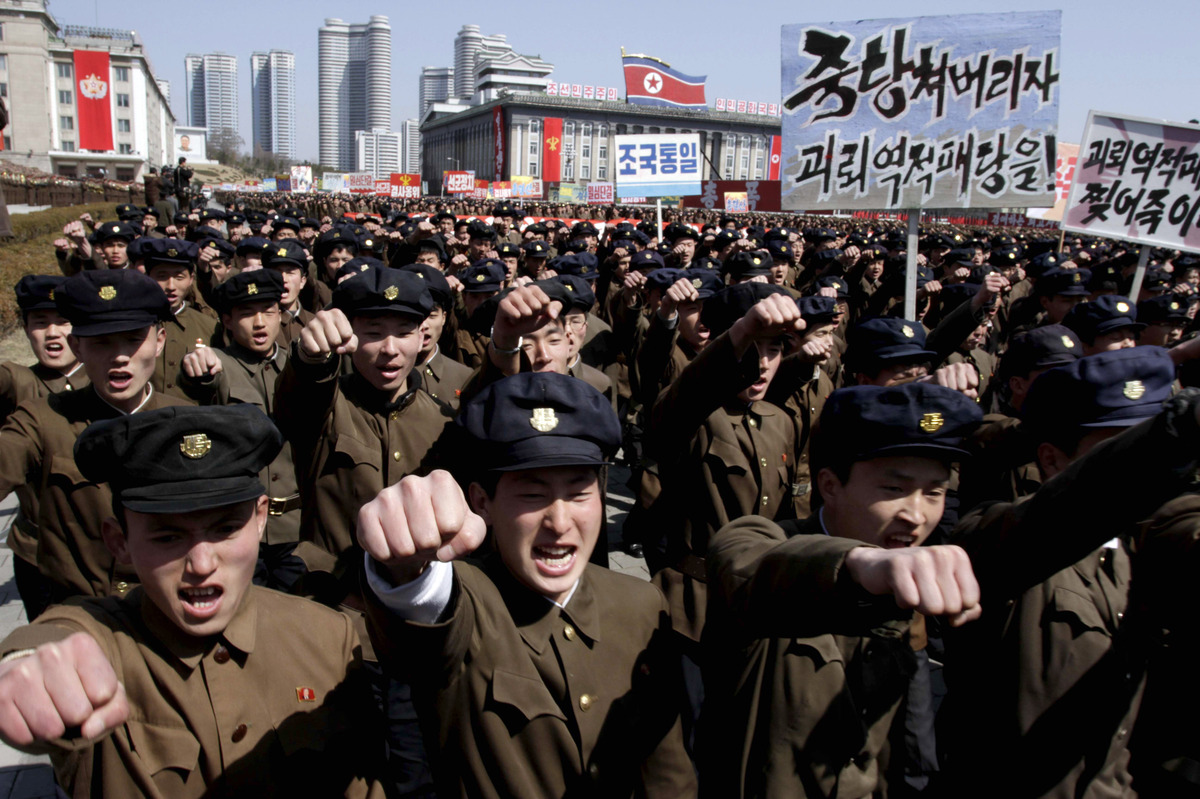 University students march through Kim Il Sung Square in downtown Pyongyang, North Korea, on Friday. Tens of thousands of North Koreans turned out for the mass rally at the main square in Pyongyang in support of leader Kim Jong Un's call to arms.

North Korea has cut its last military hotlines with South Korea and yet again stepped up its rhetoric, rattling nerves in the region.

Thousands of North Koreans rallied in central Pyongyang, chanting "Death to the U.S. imperialists." Their leader, Kim Jong Un, has been calling for "scores to be settled" with the U.S.

This is just the latest phase in a propaganda war. Pyongyang also released a video showing an invasion of Seoul. In the video, North Korean forces fly across the border to destroy American bases in South Korea. Pyongyang also cancelled the armistice agreement that ended the Korean War. But experts are skeptical about North Korea's threats to attack American bases in Guam, Hawaii and the U.S. mainland. 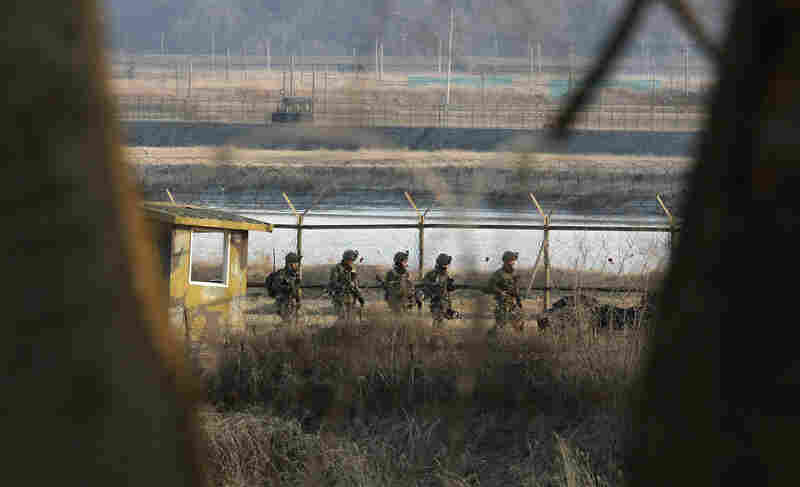 South Korean soldiers patrol along a barbed-wire fence near the border village of Panmunjom on Wednesday. Ahn Young-joon/AP hide caption 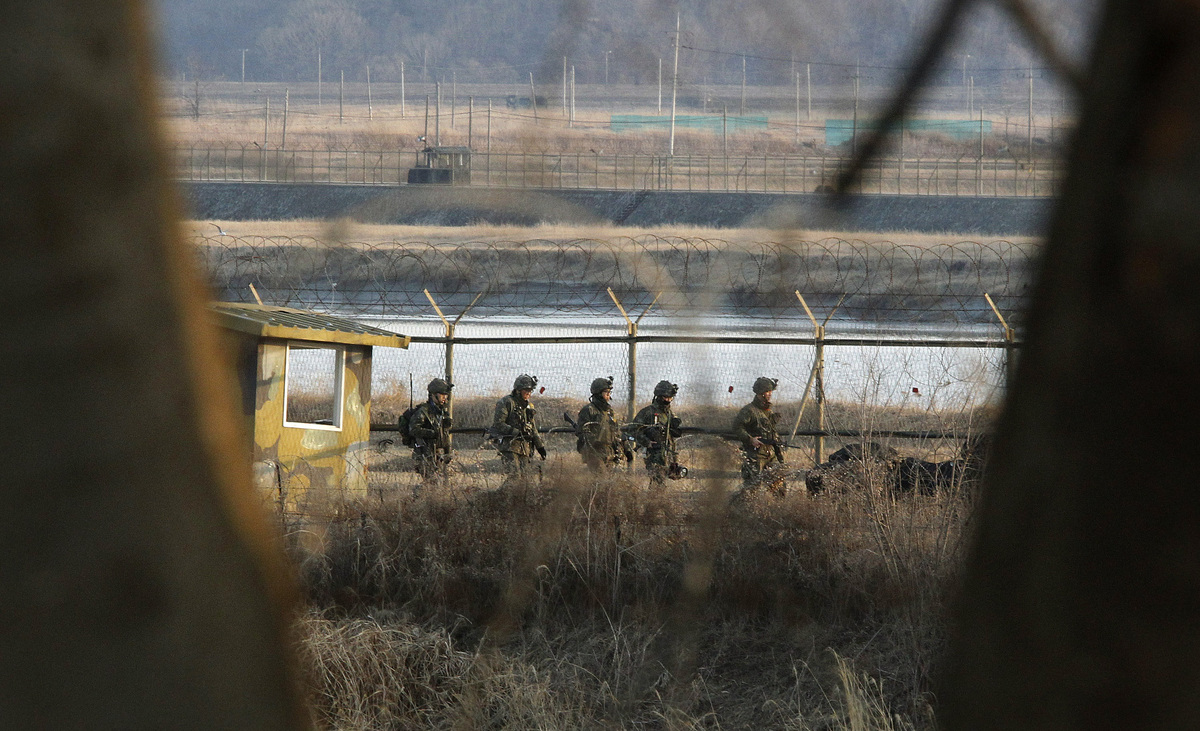 South Korean soldiers patrol along a barbed-wire fence near the border village of Panmunjom on Wednesday.

"I do not think they are capable of launching this type of attack against the United States," says Kim Heung-kyu, a professor at Sungshin Women's University in Seoul and an adviser to South Korea's last president, Lee Myung-bak. Kim says provocations are likely against South Korea, but of a different nature.

"They've conducted cyberwar, which really destabilized Korean network systems, causing lots of trouble," he says. "They will target military areas, or some certain scientific facilities, which will cause tremendous trouble. ... This is what I anticipate."

South Korea's new president, Park Geun-hye, has continued to talk about building what she calls "trustpolitik," re-establishing trust while taking a tough line with the North. Pyongyang is trying to pressure her to soften her policies, while gaining direct talks from Washington.

But now, with communication links severed, the biggest danger is one of miscalculation, according to John Delury of Yonsei University in Seoul.

"Both countries are essentially on a kind of war footing. In the South, certainly there's expectation that some provocation could be coming soon, and there's no one on the end of the [hotline] to answer, to clarify," he says. "South Koreans are finger-on-the-trigger ready to do something. That's why it's so dangerous to have no channel whatsoever between the two countries right now."

North Korea has antagonized China, its traditional ally, with its rocket launch and third nuclear test.

Peking University's Jia Qingguo says Beijing's position is much tougher than before and that China is on board for stiffer U.N. sanctions against its old ally.

"I think this is a turning point. North Korea has decided to pursue what it believes to be its best interests at the expense of the interest of other countries, including China," Jia says. "I think China has put up with it for a long time, and enough is enough."

But Beijing's prime concern is still stability — and so it's unlikely to abandon Pyongyang at the moment.

And so the propaganda war continues. The escalating threats and the massive rallies leave Pyongyang little place to go. One thing is clear: The new young leader, Kim Jong Un, has learned from his father's playbook — and may yet be more unpredictable.