Accessibility links
Why Actor James McAvoy Almost Turned Down 'Trance' McAvoy plays a sketchy art auctioneer in Danny Boyle's new heist thriller, Trance. He almost didn't take the part because he didn't want to play the role of a victim. Then he took a closer look and found something that made him "hungry." 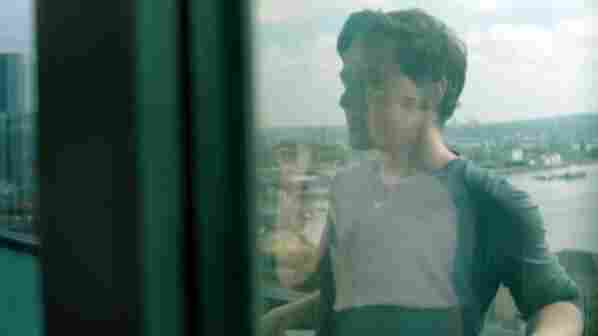 In Trance, McAvoy plays Simon, an art auctioneer with a gambling problem who ends up mixed in with a gang of criminals.

Although the 33-year-old has been dying to work with Boyle for years, he says he almost didn't take the part.

At first glance, Simon seemed to be a victim, McAvoy says; that didn't interest him. As he spent more time with the character, he changed his mind.

McAvoy spoke with weekends on All Things Considered host Laura Sullivan about his latest role, his ongoing performance in Macbeth, and how his grandparents pushed him out the door and into his wildly successful career. 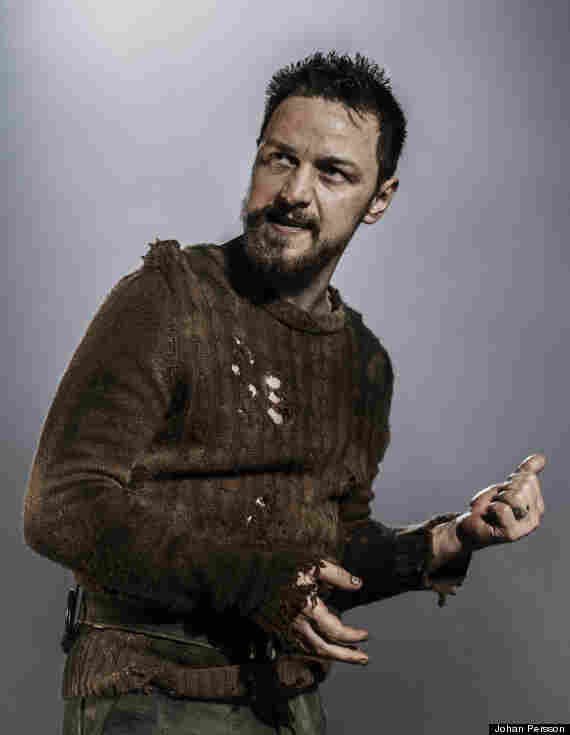 McAvoy as the titular Scottish King in a West End Production of Shakespeare's tragedy, Macbeth. The production is nominated for two Olivier Awards, including one for McAvoy's performance. Johan Persson/Trafalgar Studios hide caption 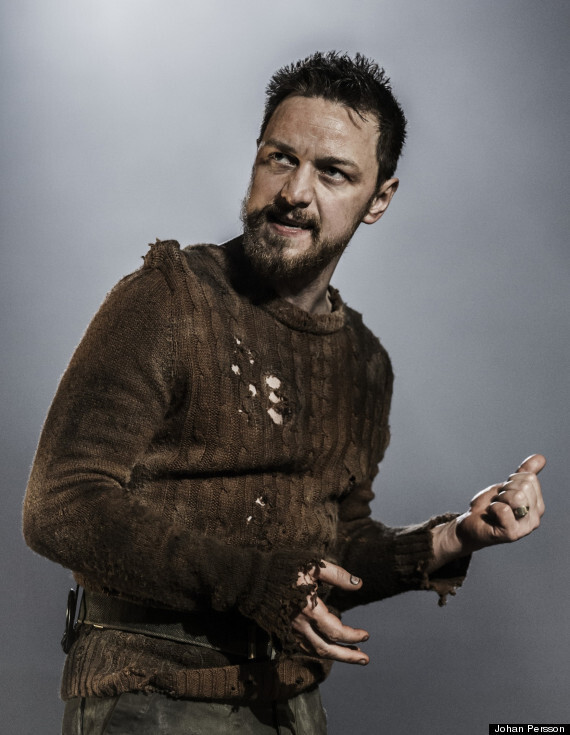 McAvoy as the titular Scottish King in a West End Production of Shakespeare's tragedy, Macbeth. The production is nominated for two Olivier Awards, including one for McAvoy's performance.

On his decision to take a role in Trance

"I got about 15 or 20 pages in, and I started to sense that something else was coming in the character and then something else did come. And then about every 10 pages, something else came. Until at the end, I was hunching at the bit, as we say in Scotland. ... It just means I was desperate ... I was hungry to play this part."

"Yeah, the Olivier Awards! We also got nominated for best revival. Go team! And we are over the moon, we are so proud.

"When I kick a door and I run on the stage, it's easy from that moment, but right now I'm sitting here going, 'How am I gonna do this tonight?' I feel like that quite a lot. But I probably find it more difficult doing this Macbeth than any of the action movies I've ever done.

"I've never been injured on an action movie. I've been injured playing this guy so much more than any action movie I've been on. ... Different things [happen] every night. Just as soon as I make myself safe by going, 'I won't do that again cause then I get a sword in my face,' something else happens and I put my shoulder out.

"We've all suffered in the cast. There's 15 of us in the cast, and we're all down to physio like twice a week having to get sports massages and all that, but that's kind of the joy of it. We've got a really brave, bold, violent, in-your-face scary production, and it's the kind of Macbeth I've always wanted to be in."

On his childhood in Glasgow

"I was brought up by my grandparents, so people go, 'Oh what was that like? That must have been hard!' And you go, 'No. It was just completely normal' because the new norm seems to be whatever you make of it, doesn't it? I grew up in a council estate called Drumchapel. I think you guys call them projects? ... I lived there until I was about 19.

"It's not like, I'm not doing it down; I love Drumchapel and I go back all the time but, yeah, it's not posh, do you know what I mean? And there are certainly rough aspects to it.

"I got my first professional acting gig when I was about 19. I went south during the summer vacation from college, and I did this production of Romeo and Juliet and West Side Story, but when I came back to my grandparents' house, they'd completely thrown out all of my stuff and redecorated my bedroom. So I moved out five days later. ... They maintain that they were gonna try and make me move out, but I took it that it was time to go."

On how he almost became a Catholic missionary

"About the age of 15 or so I did consider it, and specifically not just any old priest, I considered being a missionary, 'cause I thought the whole great romantic idea of going off to far-flung regions, and helping people and trying to do all that was not only a good thing to do and romantic thing to do, but quite an adventurous thing to do.

"So I thought about that, but then I did start getting more luck with girls about that time, and that sort of put the kibosh on wedding myself to God."

"Girls and adventure, and then acting kind of came along right at that moment as well, and so I am so, so thankful, especially since I turned my back on God, he has not punished me, thank you very much."

On what his grandparents think about his career

"They're proud as punch. They're besides themselves at times, and I love that, I really do love that.

"Because I do remember, they were amazing when I was growing up. They would support me in anything I would do. They wouldn't perhaps do it with the conviction and enthusiasm that would make me believe that I thought that they thought that I had any talent, or that I deserved my place in the world as an actor.

"And that was really actually empowering because from a very early age I knew that, you know, that life was risky but you gotta take those risks."

On his remarkably successful career

"I don't know what I thought it was gonna be. Honest to God, I did a movie and a couple of little TV shows when I was 16, didn't do anything again, got into drama school. Then I started working pretty much immediately after drama school. I wasn't really aware of what was going on, and I still hadn't really decided that I was an actor. I hadn't sort of said to myself 'Right, this is the rest of my life,' because you can't, because they is still a big massive part of me saying, 'What if the work dries up tomorrow? Then I'm not an actor anymore,' you know?

So it wasn't really until probably making The Last King of Scotland in Uganda, going to one of those exotic places, going to one of those incredible other places, and really getting in — that was probably the moment when I thought, 'Oh my God, I'm actually doing this. I'm actually doing what it is that I was keen to do when I was 15 or 16, not necessarily being an actor, but I'm having the life that I kind of hoped I might have at one time. ... I thought, right, I better start treating this more seriously, not that I didn't treat the work seriously but I didn't really regard myself as someone who deserved my place in the industry.

Also that whole thing of people going, 'Your background doesn't suggest that you would make it here.' You look around and every single person, nearly every single person, anyway, is from a similar background. They're all from places, unlikely sources. Do you know what I mean? And that gave me great comfort, and I do feel like I have a place here, and at least I deserve it as much as anybody else, hopefully."