Accessibility links
Why Not Apologizing Makes You Feel Better Expressing regret may grease the social wheels, but not doing so boosts your sense of power, control and self-worth. Try explaining that to your boss. 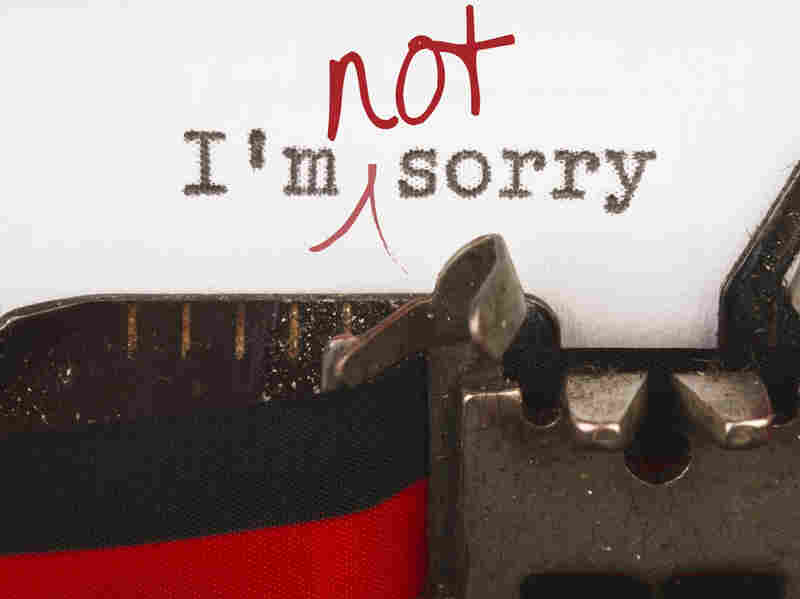 To err is human.

So is refusing to apologize for those errors.

From toddlers and talk show hosts to preteens and presidents, we all know people who have done stupid, silly and evil things, then squared their jaws and told the world they've done nothing wrong.

In a recent paper, researchers Tyler G. Okimoto, Michael Wenzel and Kyli Hedrick reported on what they've found happens in people's minds when they refuse to apologize. They find that parents who tell their kids that saying sorry will make them feel better have been telling kids the truth — but not the whole truth.

"We do find that apologies do make apologizers feel better, but the interesting thing is that refusals to apologize also make people feel better and, in fact, in some cases it makes them feel better than an apology would have," Okimoto said in an interview.

Okimoto surveyed 228 Americans and asked them to remember a time they had done something wrong. Most people remembered relatively trivial offenses, but some remembered serious offenses, including crimes such as theft.

In both cases, Okimoto said, refusing to apologize provided psychological benefits — which explains why people are so often reluctant to apologize.

The same thing happened when people were asked to imagine doing something wrong, and then imagine apologizing or refusing to apologize.

When you refuse to apologize, it actually makes you feel more empowered. That power and control seems to translate into greater feelings of self-worth.

Tyler G. Okimoto, researcher at the University of Queensland

"When you refuse to apologize, it actually makes you feel more empowered," he said. "That power and control seems to translate into greater feelings of self-worth."

Ironically, Okimoto said, people who refused to apologize ended up with boosted feelings of integrity.

The researchers are not suggesting that refusing to apologize is a useful life strategy: Okimoto himself said he has little trouble apologizing. The interpersonal benefits of apologizing are huge, and an apology can renew bonds not only between people but also between countries.

Okimoto believes the research, in fact, may provide a clue on how best to get people to apologize. Our conventional approach, especially with kids, is to force people to apologize. But if people are reluctant to apologize because apologies make them feel threatened, coercion is unlikely to help — that is, if a sincere apology is hoped for.

Support and love, by contrast, may be a more effective way to counter the feelings of threat involved in an apology.

The next time junior — or your partner — does something wrong, pass on the stare and try a hug.