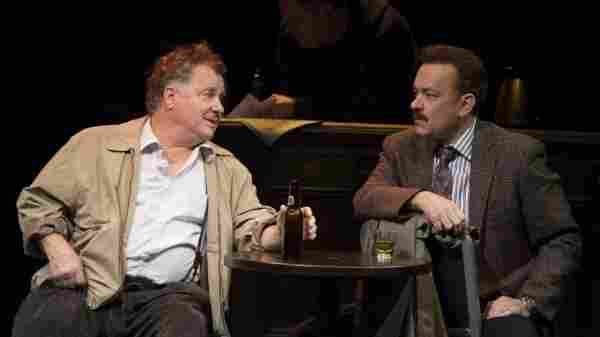 Several years ago, when Nora Ephron handed Tom Hanks an early draft of Lucky Guy, her play about tabloid journalist Mike McAlary, he had a pretty strong reaction.

"I said, 'Well, that guy's sure a jerk!' I used another word besides jerk — I know what you can say on NPR," he says. "And she laughed and she said, 'Well, he kinda was. But he was kinda great, too.'"

What appealed to Ephron about the sometimes ethically challenged, hard-driving, hard-drinking McAlary was that he came from a world that was dear to her heart — she moved to New York as a young woman and landed a job at the New York Post. Hanks says, in some sense, she never stopped being a reporter.

'A Love Poem To Journalism'

Lucky Guy, which opens Monday for a limited run at New York's Broadhurst Theatre, is one of the Broadway season's most highly anticipated plays. It stars Hanks, in his Broadway debut, and it's the last play written by his late friend and collaborator.

'He Was Dancing With Another Girl'

Watch A Clip From 'Lucky Guy' - 'Count The Bodies'

Watch A Clip From 'Lucky Guy' - 'You Owe Me An Apology'

'You Owe Me An Apology'

The play is set in the tabloid newsrooms, streets and bars of New York during the '80s and '90s, when the city was facing a crack epidemic and pockets of police corruption. But more than anything else, says director George Wolfe, it's a play about newspapers.

Lucky Guy features an ensemble cast of 12 men and two women. Wolfe says audiences who know Ephron from her romantic comedies may be surprised to encounter such a testosterone-fueled work, with more profanity in the dialogue than a lot of David Mamet plays. After all, she once told him, "What's more fun than hanging out in the bar with the guys?"

"And they all change. And the sort of intimate knowledge that she brings about all of that is really fun. And it's been fun to play with."

'I Did This To Hang Out With Nora'

Many of the play's characters are based on their real-life counterparts, some of whom are very much alive. And some, like McAlary, who passed away from cancer at the age of 41, are no longer with us. Hap Hairston, who died of a heart attack in 2002, was one of McAlary's editors and best friends. He's played by Courtney B. Vance.

"Their work was much better because of [Hairston's] deft hand and it's a bit like a marriage — that editor and writer relationship, as you know," Vance says. "And so he was very, very good at what he did and when they separated, it was hard on both of them."

The play follows McAlary through the ups and downs of his life and career — his rise to the best paid columnist in New York tabloids, his near-fatal car crash caused by his own drunken driving, his reporting missteps and his rehabilitation.

His last major story, which exposed a horrible episode of police abuse in 1997, earned McAlary the Pulitzer Prize, but he died of colon cancer just months later. Hanks says there's a kind of poignancy, working on a play about a man who died of cancer, written by a woman who died of cancer before she could see it staged.

"Well, selfishly, I did this to hang out with Nora," Hanks says. "The original part of this was: Well, how bad can that be? Go off and, you know, be on Broadway finally and do it with Nora and she'd be there every day and we'd be batting around ideas."

Ephron's son Jacob Bernstein, who's a journalist himself, says he's proud of her work on Lucky Guy, but Monday's opening will be bittersweet.