Accessibility links
Stockton Bankruptcy Case Defers Decision On Pensions A federal judge's ruling means the California city will become the largest ever to enter into bankruptcy. But the bankruptcy judge did not decide on the question of whether Stockton has to rethink its pension obligations. 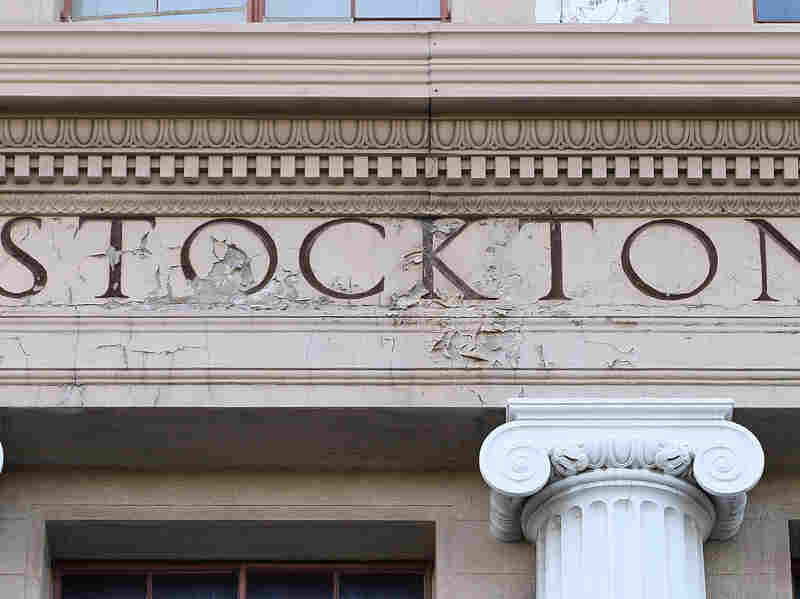 An aging sign at City Hall in Stockton, Calif. A judge has ruled that the city is eligible for federal bankruptcy protection. Justin Sullivan/Getty Images hide caption 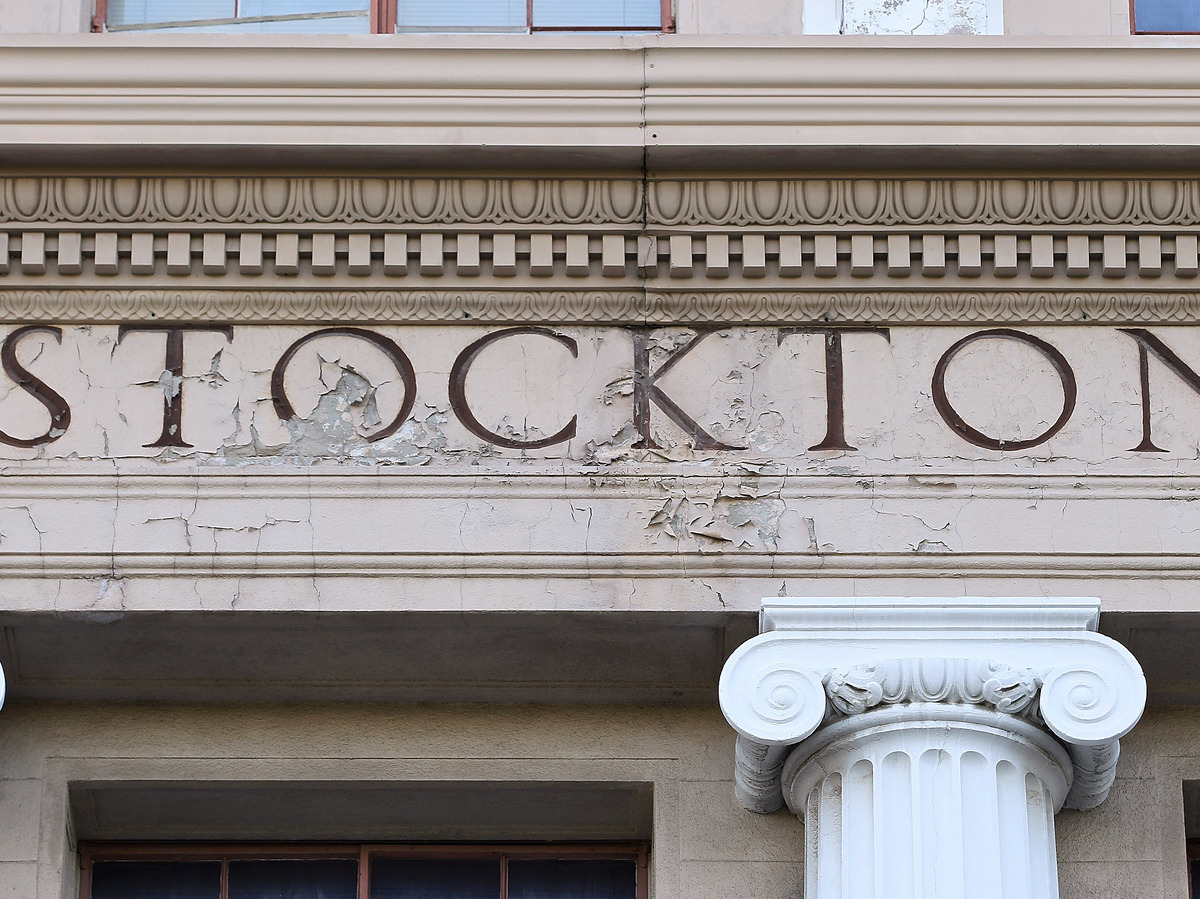 An aging sign at City Hall in Stockton, Calif. A judge has ruled that the city is eligible for federal bankruptcy protection.

U.S. Bankruptcy Judge Christopher Klein ruled Monday on the most important question facing Stockton, Calif. — whether it could enter into federal bankruptcy protection.

Klein agreed that the city is, in fact, broke.

But he didn't decide the question of whether the city must renegotiate its pension obligations, as some of its creditors had hoped.

"He did put off for another day the question of whether the pension holders would have to be part of any debt reduction solution," says Robert G. Flanders Jr., who was the state receiver appointed to oversee the troubled finances of Central Falls, R.I.

It's possible that, as Stockton draws up its plans for getting its financial house back in order, it will revisit its pension obligations, though the city has been reluctant to do so.

Klein did not force the city's hand in this regard, though he made it clear this could remain an issue going forward.

"The pension question may be presented in a number of different ways," says James Spiotto, a municipal bankruptcy attorney in Chicago. "Why rule on something you don't absolutely have to rule on?"

Like many other cities, counties and states, Stockton's pension fund is millions of dollars in the hole. Typically, pension obligations have been held sacrosanct, even as bondholders and other creditors lose money in bankruptcy proceedings.

As is the case with most other California localities, Stockton's pensions are managed by the California Public Employees' Retirement System, or CalPERS, the largest pension fund in the country.

The biggest municipal Chapter 9 bankruptcies in the U.S., and the approximate debt.

Stockton owes CalPERS as much as $900 million to cover its pension obligation, which is the city's single-biggest liability. Stockton officials argued before Klein that, due to protections for pensions in the state constitution, it has to pay CalPERS the full amount.

That's been the typical reasoning in such cases. Promised pension benefits are protected under both state and federal law.

Many governments have been changing their rules for new employees and benefits to be accrued in the future, but they've felt legally bound to honor all pension debt that's already been incurred.

Stockton's position was challenged by bond insurers who guaranteed $165 million in loans the city used to make contributions to CalPERS several years ago.

Why should they get back only 17 cents on the dollar, they asked, while CalPERS expects to get every penny?

"Naturally, the bondholders and others who will be taking a big haircut in the debt adjustment process are saying that's not fair — there's a big class of creditors who are being given a free pass here," says Flanders, a former associate justice of the Rhode Island Supreme Court.

"The issue is a very important one, not just in Stockton and not just in California, but across the country," he says.

Stockton was one of three California cities to seek bankruptcy protection last year, along with San Bernardino and Mammoth Lakes. Mammoth Lakes has already been denied such protection.

They were the only three cities in the country to file for bankruptcy last year. Not all states allow cities to go bankrupt. Even so, the actual number of bankruptcies is fairly low — an average of nine per year over the past five years, including local government units such as hospital and utility districts, according to Spiotto, who practices with Chapman and Cutler LLC.

"Since 1954, there have only been 62 cities, towns, village or counties that have filed for Chapter 9," he says. "Of those, 29 were dismissed. They found some other way of adjusting their debt."

It's possible that more cities will declare bankruptcy in the future — or threaten to, in their negotiations with creditors — if it becomes a way to get out from under crippling pension debt.

"It's really unfortunate that it's come to bankruptcy proceedings as a way to negotiate pension promises and contracts," says Jean-Pierre Aubry, assistant director of state and local research at the Boston College Center for Retirement Research.

Who Ends Up Paying?

The whole point of bankruptcy law is that it tears up contracts and erases financial obligations that under normal circumstances would have to be paid, Flanders says.

If Stockton continues to hold its pensions obligations sacrosanct — in essence, not addressing the largest single source of its debt — it will have to convince Klein that such an approach won't harm the city's return to solvency.

"The underlying question here is whether a city can pick and choose which debts it wants to adjust and leave other obligations intact," says Flanders, the former Rhode Island judge.

"In the end, a federal judge is going to be loath to question a city's decision to favor one creditor over another," he says.

The question of who is forced to make future sacrifices because of the inability to fund past pension promises has been an important political topic in recent years. Pension obligations never seem to go away.

Recently, there have been reports that two descendants of Civil War veterans are continuing to receive pension payments from the Department of Veterans Administration.

"All of us baby boomers are heading into our retirement years, so the obligation is an enormous one," Flanders says. "The problem is only going to get worse and put more stress on cities and towns."