Accessibility links
In Missouri, Days Of Drought Send Caretakers To One 'Big Tree' Before the American Revolution, a huge tree has been standing in central Missouri, growing to 90 feet tall. The beloved bur oak, which everybody calls "The Big Tree," has survived all kinds of punishments during 350 years on the prairie. But last year's record drought was rough on the tree, causing it to wilt and alarming two locals who nursed it back to health. 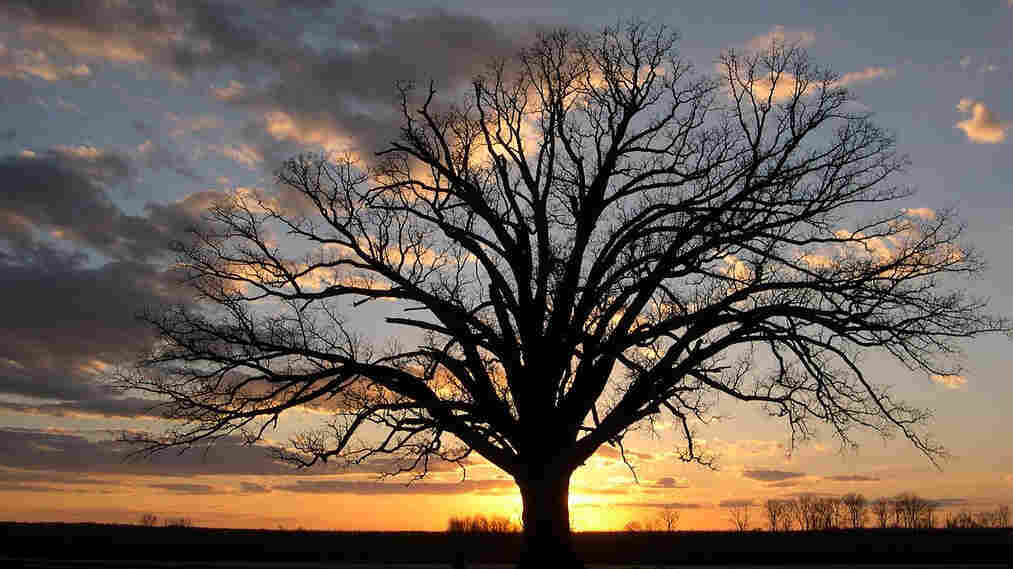 This bur oak, called "The Big Tree" by Missouri locals, has been around for centuries. When a drought hit the state last year, the community came together to offer help and water for the iconic tree. Courtesy of Christopher Starbuck hide caption 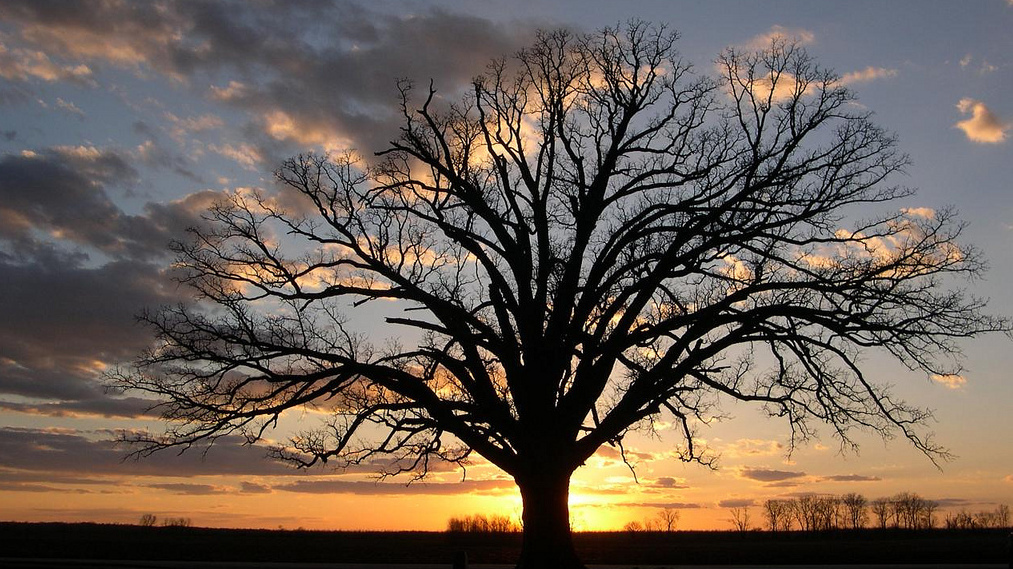 This bur oak, called "The Big Tree" by Missouri locals, has been around for centuries. When a drought hit the state last year, the community came together to offer help and water for the iconic tree.

The devastating drought in the Midwest last summer is a story often told by the numbers, with statistics on large crop failures, days without rain and thousands of parched acres.

This story is also about a tree — a bur oak in rural Columbia, Mo., that everyone calls "The Big Tree." Although it's survived all kinds of punishments during its 350 years on the prairie, last year's record drought was especially tough.

It doesn't feel like spring as John Sam Williamson meets up with Chris Starbuck, a retired plant science professor, at The Big Tree. It's below freezing and the cold wind makes Williamson pull the bill down on his John Deere cap. He's the sixth generation to farm this land along the Missouri River and the Big Tree has always helped the Williamson men tell time.

"My dad used to tell the story that his dad — who died before I was born — said that it was time to plant corn on our farm when the leaves on the bur oak tree were the size of a squirrel's ear. And so that would be April," Williamson says.

Williamson and Starbuck come every once in a while to check on The Big Tree.

Feeling 'Connected' To The Tree

Growing on a lonely stretch of curvy county road, the 90-foot-tall tree appears like a stately sentry, guarding the flat farmland that lies around it. People have partied here, proposed marriage here, launched political campaigns here. It has been photographed more times than a beauty queen and the Web is littered with her pictures — many of them found on the tree's Facebook page.

"The Big Tree is a place that we have felt connected to since the time that we've been living in Missouri," says Katie LaJeaunesse Connette, who took engagement photos dancing with her fiancé, Grant Connette, under The Big Tree last August.

The couple moved to Missouri a few years ago for a job and graduate school, and Grant Connette says they fell in love with The Big Tree.

"I think there's just something majestic about how it stands alone out in the middle of a corn field," he says. "It's just so big and wide and sprawling. I think it just has a special aura to it."

But the iconic tree really suffered during last year's record-breaking drought. Even with roots 10 feet into the ground, water was scarce. Starbuck says he grew alarmed.

"The leaves were kind of off-color and a lot of wilting. It takes quite a bit of drought stress for a bur oak to wilt," he says.

So Starbuck called Williamson last August and told him that he was going to have to do something for the first time in the 177 years the family has owned this land. The next day, Williamson hauled an 850-gallon tank down the road from his home and watered The Big Tree.

"By the time the water all ran out, it had all soaked in the ground," Williamson says. "There was no standing water anywhere. There were cracks in the ground and it's pretty absorbent. It just soaked it up like a sponge."

All told, Williamson figures he gave The Big Tree about 3,000 gallons of water.

It Takes A Village

When word got out — via the local paper — that The Big Tree was hurting, others brought more. People across the country offered their help, too.

"To me, that tree is no different than a beached whale. You have a beached whale, what does the community do? They all come to its rescue," says Eric Krueger, who lives outside Houston. He joined others who volunteered to send money to help The Big Tree.

Williamson turned them all down and used his own well water.

Though it's still dry around the area, both Williamson and Starbuck think this beloved tree will outlive us all. That's good news because there's already at least one wedding booked at The Big Tree this fall.