Accessibility links
A Renaissance For 'Pigsticking' In Spain Hunting wild boar while riding horses and using only spears is a practice that dates back at least 2,000 years — and now it's making a comeback in Spain. 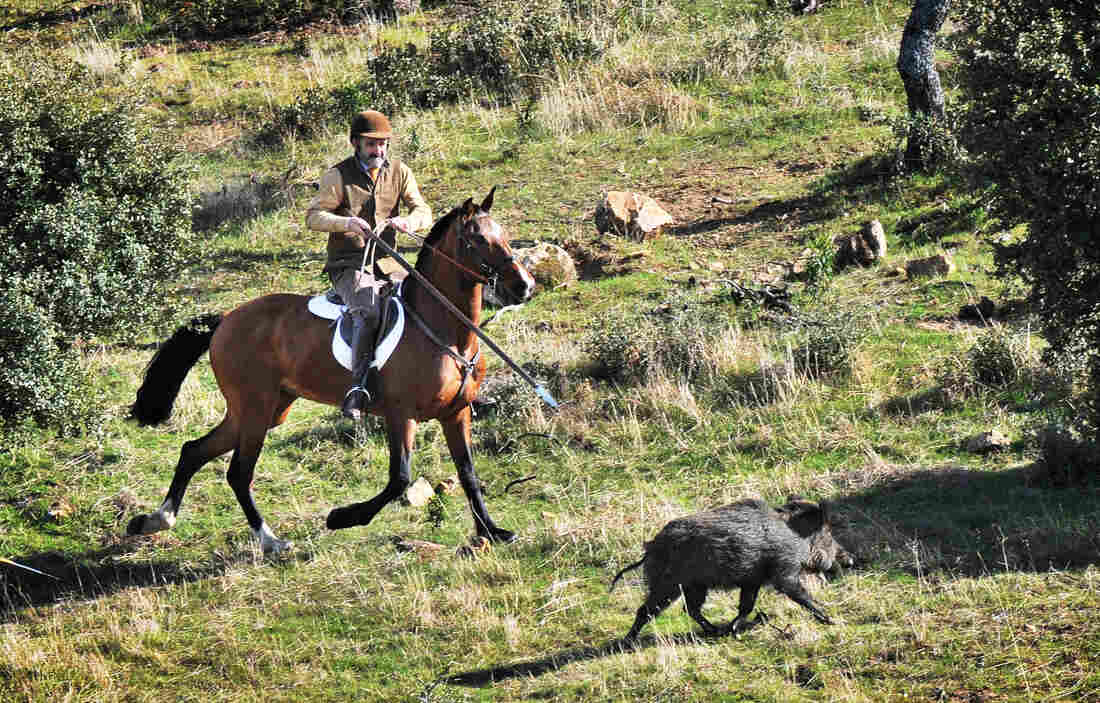 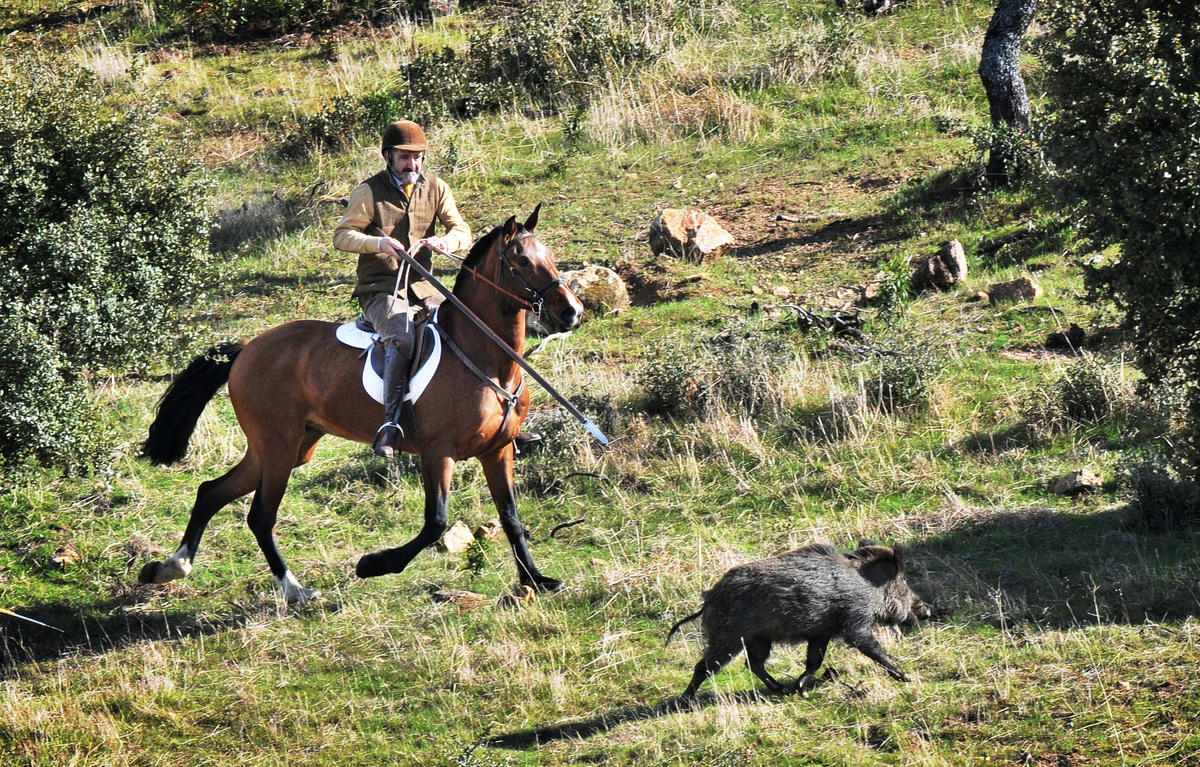 Ramiro Maura hunts wild boar at his ranch near Madrid in February.

An ancient hunting ritual is making a comeback in modern Spain: the practice of hunting wild boar on horseback with spears — and no guns. The sport dates to Roman times, and was recently approved and added to Spanish hunting regulations.

Just a 20-minute drive from Spain's capital, you're in the dehesa — oak woodlands, where wild boar, deer and mountain goats roam. Madrid's skyscrapers are on the horizon, but in the forest, ancient traditions still reign.

On a recent day, a hunting party prayed in unison before mounting horses and riding off in search of wild boar. This landscape, parts of which are a United Nations biosphere reserve, has gradually emptied of people as Spaniards migrate to cities in search of jobs. 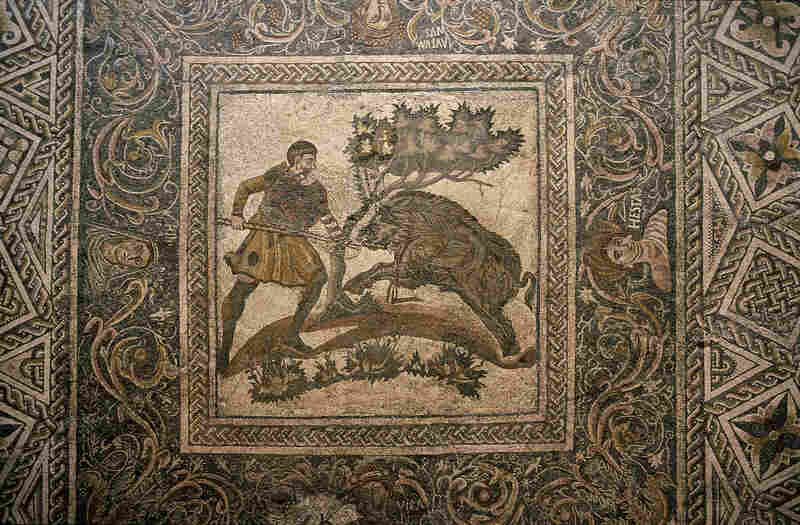 A fourth-century mosaic floor from a Roman villa — now on display at a museum in Merida, Spain — includes depictions of boar hunting. JMN/Cover/Getty Images hide caption

Among those left is Ramiro Maura, whose family established its ranch in the area centuries ago.

"For thousands of years, the only way to get a boar was to chase it with a horse. There was no other weapon," he says. "This has been taking place for 2,000 years."

Perhaps even longer than that: Prehistoric cave paintings in Spain depict primitive man on horseback, chasing wild boar, with spears. It was also popular in colonial India.

Often hunters chase a single boar all day. And often the animal gets away. It isn't an efficient way to hunt, but Maura says guns — whatever you think of them — make it just too easy.

"From the shotguns to the rifles, and from the rifles to the automatic rifles — and where will we keep going?" Maura asks. "How are you going to protect the ancient ways of hunting, when there's no limit to the capability of mankind to make more sophisticated weapons?"

It takes expert riders to maneuver and finally corner a wild boar, then stab it with the long spears they've managed to lug along while galloping across steep terrain. In this case, the boar uses its tusks to try to attack one the horses and then cries out as a spear pierces its heart.

The animal is then hauled away to be cooked for dinner or exported to Germany — the No. 1 destination for wild boar meat from Spain.

Despite a growing animal rights movement in Spain and the recent ban on bullfighting in Catalonia, there's been no uproar over this sport, which is officially known as "pigsticking."

"It's something that hasn't gotten a lot of publicity, and it's something I think most Spanish citizens are not aware of," says Sharon Nunez, a spokeswoman for the group Animal Equality. "If they were, I'm sure that a great percentage of them would be against this kind of cruel sport."

Nunez hadn't heard of pigsticking either until it was recently added to hunting regulations. And while she says every effort should be made to uphold traditions, there's a limit.

"It's the same case with bullfighting," Nunez says. "A tradition shouldn't stay or shouldn't remain if it's cruel and it means suffering and death to an innocent creature."

But where some see cruelty, others see beauty. The hunting party this day includes a poet, a novelist and a painter. They exalt in the adrenaline and the emotion. They say "stalking behind an animal" is "beautiful" and "poetic," and compare it to "touching heaven."

The sport's resurgence poses a dilemma for modern Spain — balancing rural traditions against the modern, progressive society it has quickly become. 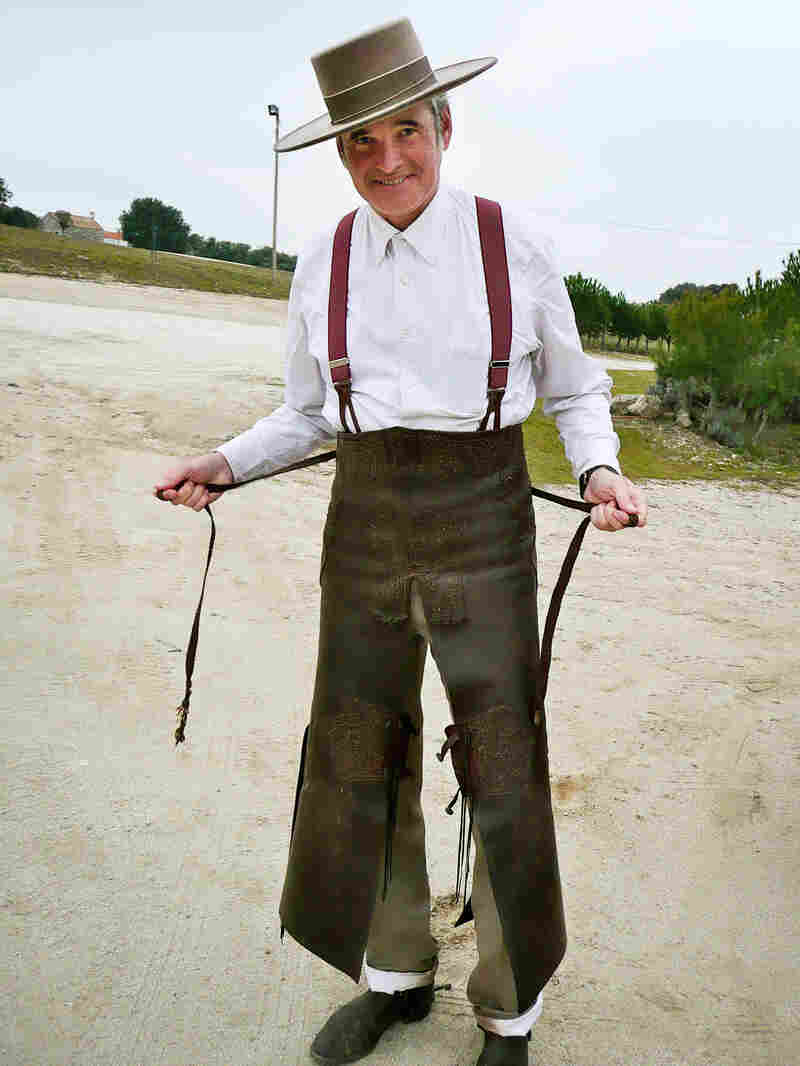 Jaime Patino shows off the leather chaps and 19th-century-style suit he wears while riding horses and hunting wild boar. Parts of his outfit belonged to his grandfather, who also loved hunting. Lauren Frayer/NPR hide caption 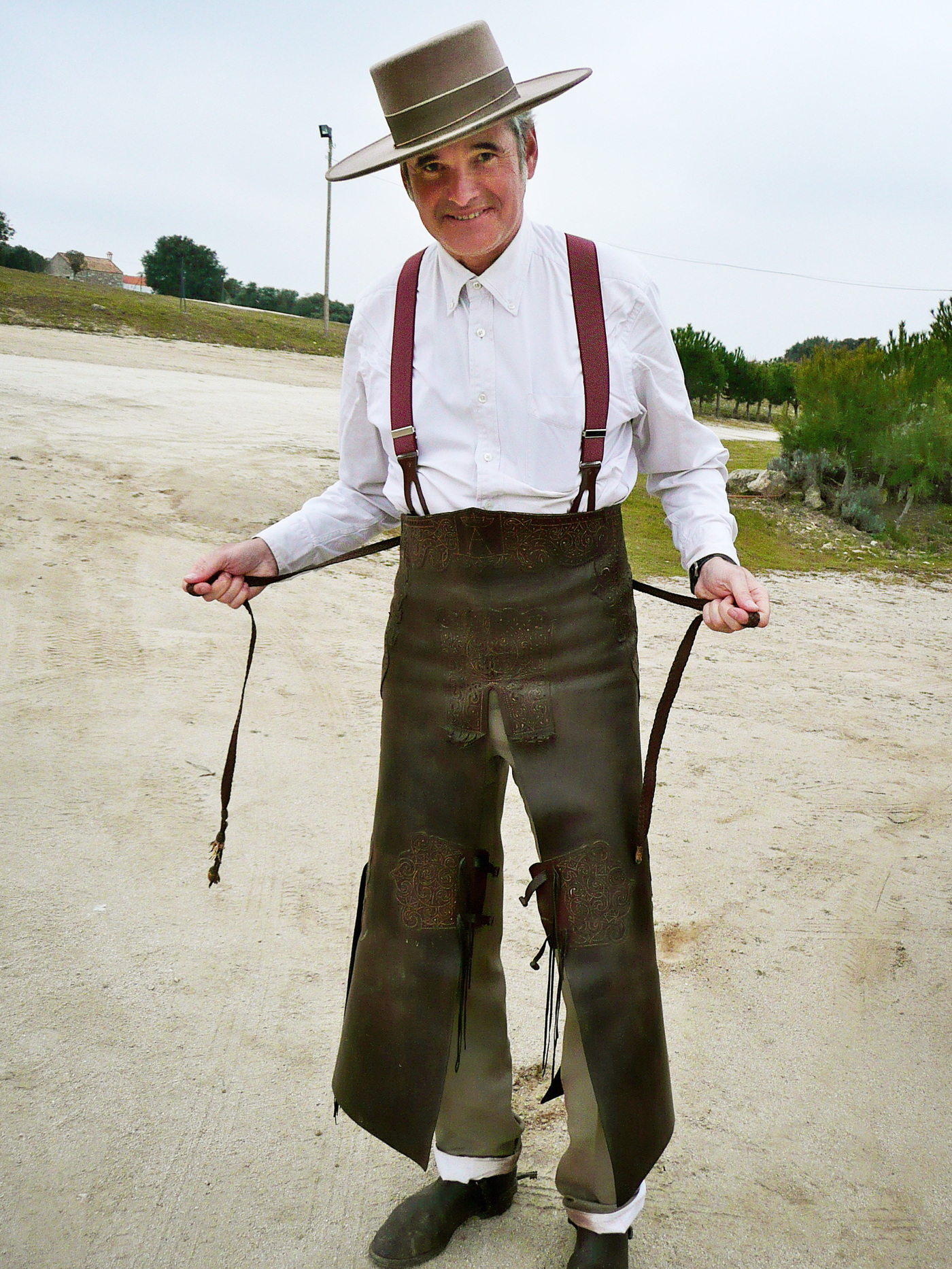 Jaime Patino shows off the leather chaps and 19th-century-style suit he wears while riding horses and hunting wild boar. Parts of his outfit belonged to his grandfather, who also loved hunting.

"We try to make a distinction between the roots of a culture and customs in the rural world, and the brutality, and things that we in the 21st century can't let go on," he says.

Spain is still trying to negotiate its new identity. In the past 40 years, the country changed from a military dictatorship to a democracy. Millions have abandoned rural life for cities. Wildfires ravage abandoned land each summer. Now less than 20 percent of Spaniards live in rural areas.

To hunter Jaime Patino, it's the thing that makes him the saddest.

"It's my biggest battle," he says. "We are the people that really protect nature, and we are passionate for the countryside — and after that we are hunters and all that. But first of all, we are country people. We've been doing this for centuries. The properties have been a long time in our families, and we intend to continue in this way."

He'll likely be able to do so. Spain's cash-strapped government is selling off some public land to be converted into private hunting reserves.