Accessibility links
Colo. Gun Laws Offer Inspiration, Cautionary Tale For Obama The president is trying to regain traction for federal gun control measures by visiting states that are moving forward on their own. Today he speaks in Colorado, where public outrage in the wake of mass shootings helped propel new legislation — and where opponents are promising political payback. 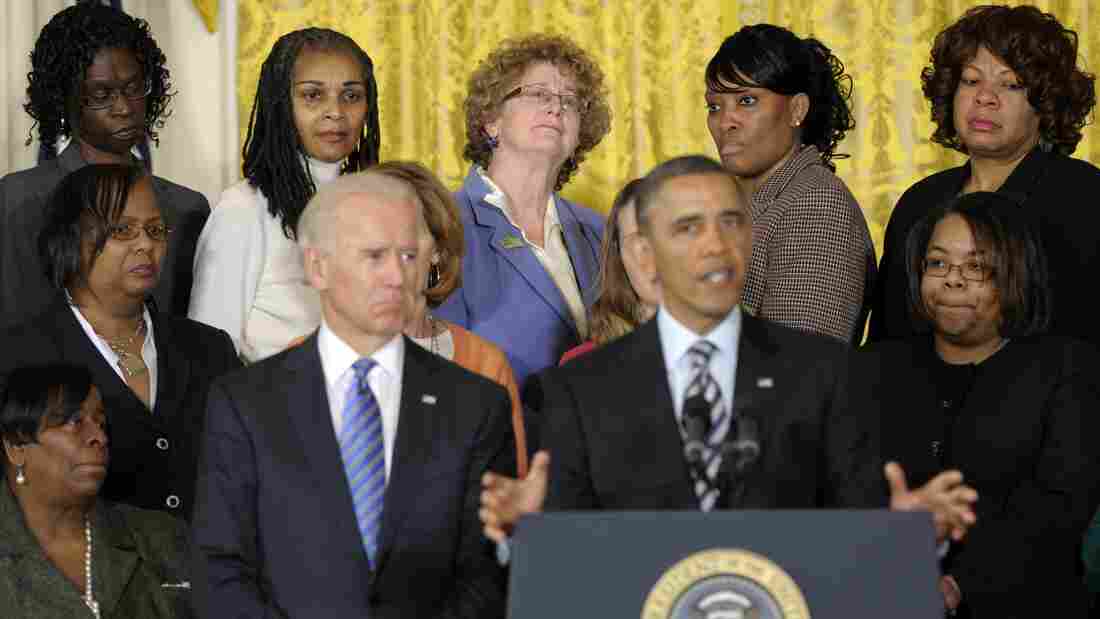 President Obama urged Congress to take action on measures to protect children from gun violence while speaking in the East Room of the White House last week. Standing with Obama are Vice President Joe Biden and, according to the White House, law enforcement officials, victims of gun violence and others, whom the White House did not want to name. Susan Walsh/AP hide caption 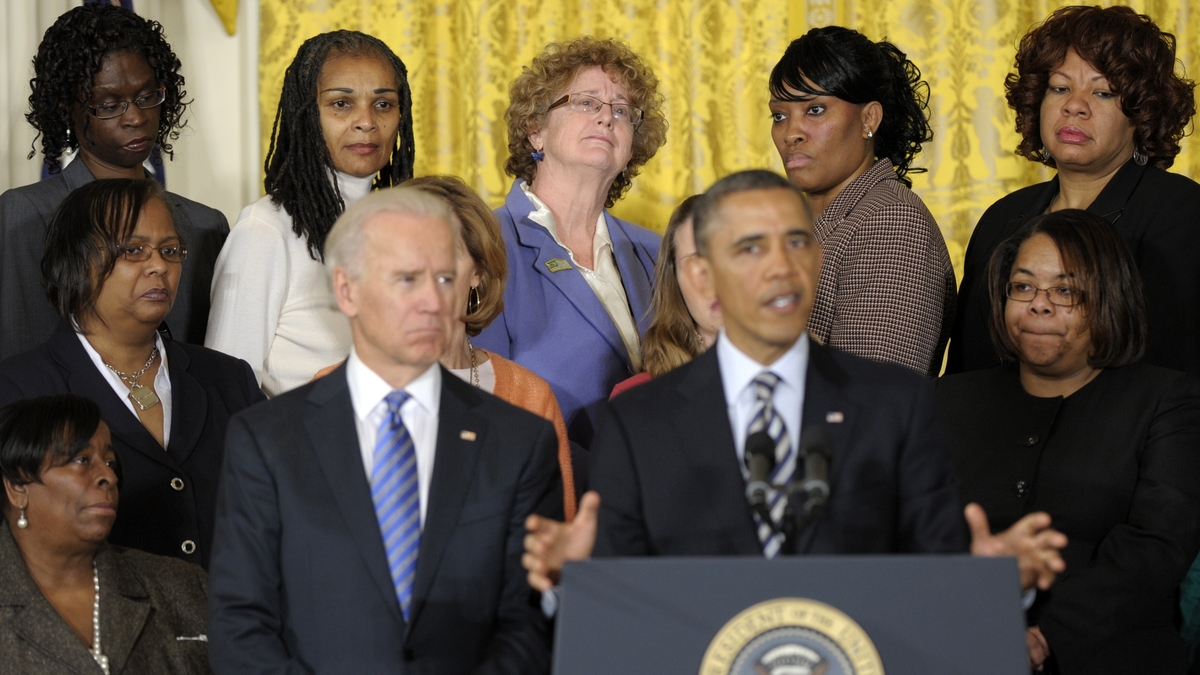 President Obama is trying to regain some traction for federal gun control measures by visiting states that are moving forward on their own.

On Wednesday, the president speaks in Colorado, where lawmakers recently passed a series of bills requiring background checks for all gun purchases and limiting the size of ammunition magazines.

Obama would like to see similar measures adopted nationwide. But if Colorado serves as an inspiration for the president, it also provides a cautionary tale.

The Century 16 movie theater in Aurora, Colo., has reopened with a new name and a new supply of action flicks. But residents here haven't forgotten last summer's massacre, in which a gunman opened fire during a late-night screening of a Batman movie, killing 12 and wounding nearly 60 others.

"I could only imagine what it was like sitting in that theater, about ready to see something that you were anticipating, and then, you know, it's just a life-changing event," says state Rep. Rhonda Fields, who represents the Aurora neighborhood where the movie shooting took place.

The Aurora shooting also reopened personal wounds for Fields. Seven years earlier, her son was shot to death shortly after he graduated from Colorado State University.

"His car and him and his fiancee were riddled with an assault rifle. So I understand the violence and how murder is just a horrible thing, when someone is suddenly taken away from you," she says.

Fields became an advocate for gun control. And this year she found plenty of company in Colorado's Democratic House and Senate. The Senate president says lawmakers were "forced" to act after the mass shootings in Aurora and later at a Connecticut elementary school.

Obama has been counting on that same public outrage to advance gun control bills nationwide.

"This is our best chance in more than a decade to take common-sense steps that will save lives," he said at the White House last week.

Obama warned that even though polls show strong support for universal background checks and other gun control measures, there is powerful opposition from the gun lobby.

That's also true here in Colorado, where Dudley Brown runs an organization called Rocky Mountain Gun Owners. His office in the small town of Windsor is near a river named for the gunpowder French trappers once stored there.

"This is a very Western state with traditional Western values," he says. "And citizens had to have firearms for self-defense, and right now that's still the case."

Brown complains that universal background checks are just a step toward identifying gun owners so the government can seize their weapons, and he calls the 15-round limit on ammunition magazines arbitrary. He's promising political payback in next year's election that could cost Colorado Democrats their majorities.

"I liken it to the proverbial hunting season," Brown says. "We tell gun owners, 'There's a time to hunt deer. And the next election is the time to hunt Democrats.' "

Similar threats have had a powerful effect in Washington, where universal background checks now face an uphill battle. Here in Colorado, state Rep. Fields says she has no regrets.

Fields says she has a message for the president and Congress: Don't give up.