Accessibility links
When Players Step Off The Court, Should Colleges Step Up? Basketball player Kevin Ware was released from the hospital after a gruesome injury in an NCAA tournament game on Sunday. In her Can I Just Tell You essay, host Michel Martin questions how fans and colleges treat players on and off the court. 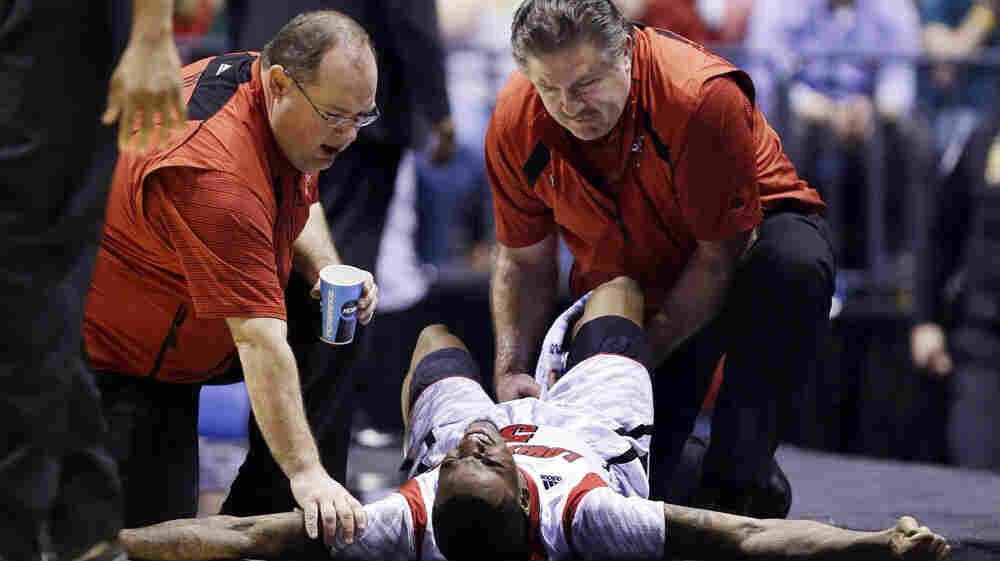 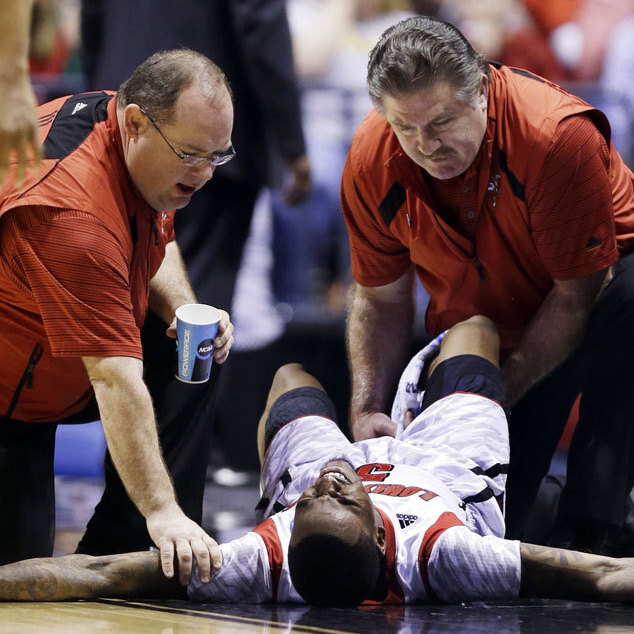 Trainers check on Louisville guard Kevin Ware after he injured his lower right leg during the Midwest Regional final against Duke in the NCAA college basketball tournament.

Finally today, I have to say something about Kevin Ware — the Louisville basketball player who suffered a gruesome injury during an NCAA tournament win against Duke last Sunday.

You don't need to have seen the injury itself — a compound fracture of the right tibia — to know that it was awful. All you have to do is look at the faces of the young men on both teams, many of them tearful and filled with shock. Thankfully Kevin Ware seems to have gotten appropriate medical attention then; he's getting a lot of emotional support now. He seems to be both positive and tough, which is something you need in a situation like this. And it seems entirely possible that he will play again, and at a high level.

But as we wish him well, let's take a moment to ponder what happens if he does NOT play again, either because he can't or because he doesn't want to. What happens to all the love from fellow students, University officials, and the basketball program?

Can I Just Tell You, that is why it is as good a time as any to revisit the question of how colleges treat so-called student athletes, and what exactly many of the players get out of the whole deal. And we're not talking about the shocking video of the Rutgers University coach cursing and physically abusing his team. That's a whole other conversation.

No, we're focusing on the ongoing scandal in big time college sports that the players who power these teams and who bring people not only to games but to their campuses too often get too little out of the experience.

Now many say that these kids are getting a college education. But, come on, we know too many are not. This year's annual survey of college graduation rates — conducted by the University of Central Florida's Institute for Diversity and Ethics In Sport — DID show improvement from years past, especially for African American male basketball players. The graduation rate for them was 65% on average --which is actually BETTER than for black male college students over all. But that still compares to 90% among white players...and for some colleges, the actuall number is a miserable 25 or 30%. And let's not forget how many kids are tripped up over NCAA violations for things like selling autographs to get pizza money.

Let's also talk about what it takes to graduate. For example, the team Louisville defeated Sunday after Ware's terrible injury, the Duke Blue Devils, regularly manages to graduate most and often ALL of its elite athletes — black and white and male and female. But we don't often think about what those athletes endure to get there

In an interview with the Blue Zone, a blog that follows Blue Devil Sports, former Blue Devil Brian Zoubek talked about that. Zoubek, a member of the 2010 national championship team and a history major, had tweeted to question why the previous Sunday's game against Creighton — another school with a strong graduation record — had to start at 9:40 pm.

Why does that matter? It matters, he said, because it meant the game ended at midnight, followed by 30 minutes of mandatory media availability. And that meant that the team would not leave Philadelphia until around 1:30 am, and would not arrive back on campus until after 4:00 am.

Zoubek said that those who think the Duke students would just forget about class have it exactly wrong. He said they WOULD go to class on Monday and Tuesday, because those are the only days they would be able to go. And that's why — he said — students often end the season exhausted, stressed and physically spent. He added in a tweet: "It's not about money at all right? What a joke."

This is not a brief for paying student athletes — there are in fact other ideas. One Florida professor suggested allowing them to major in their sport in the same way student actors and musicians can major in their professional interests. But it is simply to say that if we REALLY care about the kids who provide us with so many exciting moments, and examples of courage, character and strength, our support can't end when they leave the court, whether on a stretcher or their own two feet.