Accessibility links
Amid Threats, N. Korea's Neighbors Rethink Defense Policies As North Korean leader Kim Jong Un threatens nuclear strikes on South Korea, Japan and the U.S., there is a new determination across the region to adopt a tougher line. There's talk now in Japan and South Korea that they should have nuclear weapons of their own — a position the U.S. opposes. 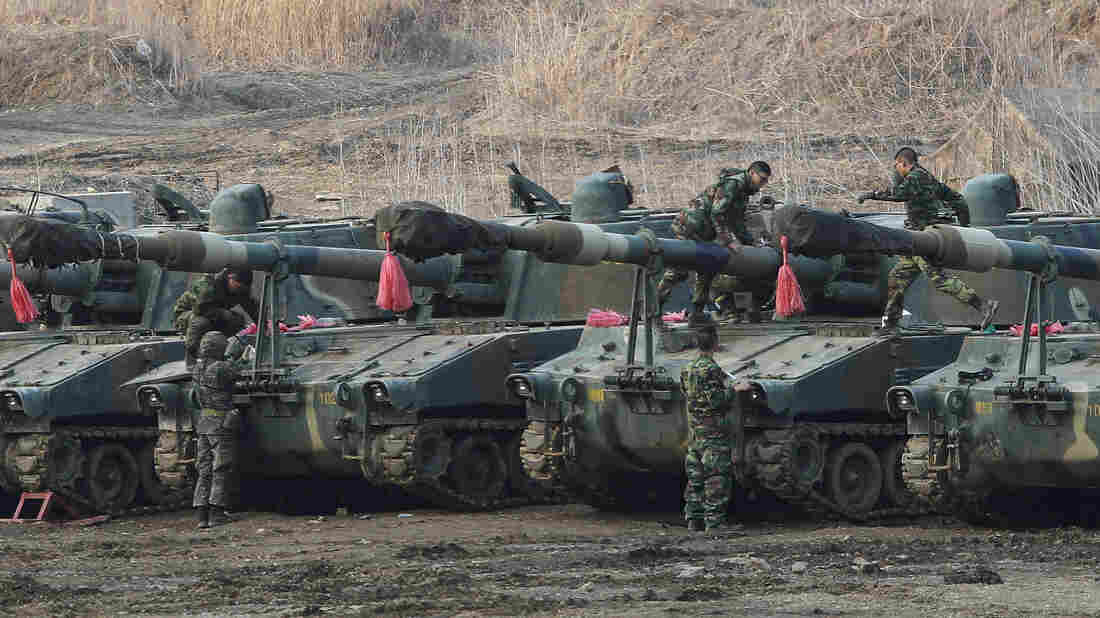 South Korean marines work on their K-55 self-propelled howitzers during an exercise against possible attacks by North Korea near the border village of Panmunjom in Paju, South Korea, Wednesday. Ahn Young-joon/AP hide caption 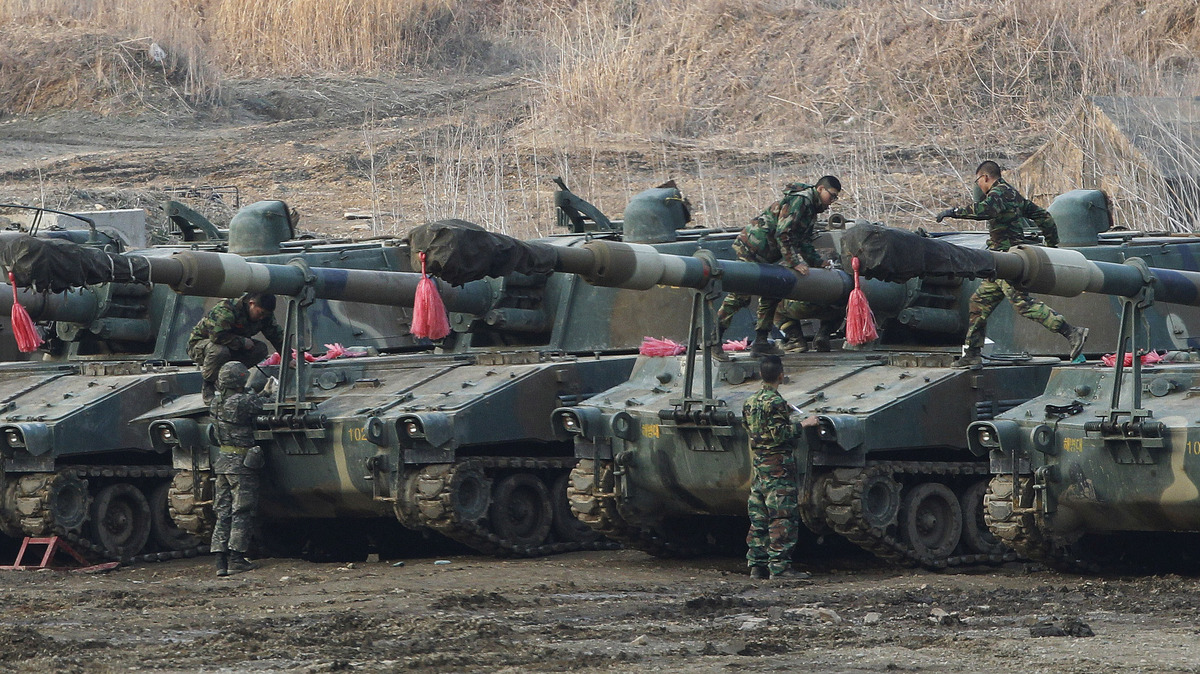 South Korean marines work on their K-55 self-propelled howitzers during an exercise against possible attacks by North Korea near the border village of Panmunjom in Paju, South Korea, Wednesday.

North Korea has been a big headache for the United States, with the new leader there saying almost daily that his country is ready to go to war.

Speaking in Washington on Wednesday, Defense Secretary Chuck Hagel said the U.S. can't afford to dismiss that talk as bluster.

"It only takes being wrong once, and I don't want to be the secretary of defense who was wrong once, so we will continue to take these threats seriously," he said.

It's not just the developments in North Korea that have the Obama administration's attention these days. South Korea and Japan may be rethinking their defense policies as a result of the North Korean threats.

North Korea's Brinksmanship: Same As Before, More Dangerous Or Both?

A Change In Attitude

South Korea's capital, Seoul, with a population of more than 10 million people, has for years been within easy shot of North Korea's vast artillery. For much of that time, the South Korean attitude has been: Do whatever is necessary to maintain peaceful relations.

Gen. Walter Sharp, who commanded U.S. forces in Korea until 2011, recalls the prevailing sentiment when he arrived.

"You talk to a South Korean, when I got over there in 2008, 'We just got to keep this calm. We don't want to challenge them too much.' And it was all because of where Seoul is, and the damage that could come with where North Korea has their artillery and all that."

Now, with the new North Korean leader, Kim Jong Un, threatening nuclear strikes on South Korea, Japan, and the U.S., there is a new determination across the region to adopt a tougher line.

Sen. Bob Corker, R-Tenn., noticed that change in attitude last week on a visit to Japan and South Korea.

"When you see this kind of activity, it puts pressure on other countries in the region as their populations themselves become concerned about an immature leader, 30 years old, being bellicose in this way and threatening that part of the world," he said.

There's talk now in Japan and South Korea that they should have nuclear weapons of their own, to match North Korea's threat. The U.S. opposes that. But now U.S. officials have another challenge to deal with: The South Korean government wants to renegotiate a civil nuclear accord with the U.S. to be able to reprocess spent nuclear fuel. Theoretically, it could set South Korea up to make nuclear weapons of its own.

Corker said every leader he met with in Seoul pressed him on the reprocessing issue.

"They say it's for civilian purposes only, that there's a technique that they'll be using that would not allow these to be turned into nuclear weapons, but in the backdrop of this, again the president is not in any way pushing for this, but the population is becoming more oriented that way," he said.

U.S. officials have long resisted South Korea's request for reprocessing permission. Some U.S. analysts say they suspect the South Koreans may actually want to be positioned to build nuclear weapons.

William Tobey, who worked on nonproliferation issues in the George W. Bush administration, says he's not convinced by the South Koreans' arguments — that reprocessing nuclear fuel makes sense for economic and energy reasons.

"I wouldn't question South Korean motives," he said. "On the other hand, as you go through the arguments that have been advanced in favor of reprocessing, it's really possible to knock them down one by one."

U.S. officials have been reassuring the South Koreans that the United States will protect them and have pointed out that allowing South Korea to reprocess spent nuclear fuel might prompt less reliable countries to demand the same rights. But with North Korea's leader swearing each day that he's ready to launch a nuclear war, those U.S assurances don't carry as much weight as they otherwise might.