Accessibility links
Movie Review - 'The Company You Keep' - Robert Redford And Friends Remember The Revolutionary '70s Lesser talents could lose track of the high-wattage cast that joins the actor-director in The Company You Keep. But this modern-day journalistic revisit to the revolutionary turmoil of the 1970s succeeds because Redford knows how to keep his marquee-name ensemble on the same page. 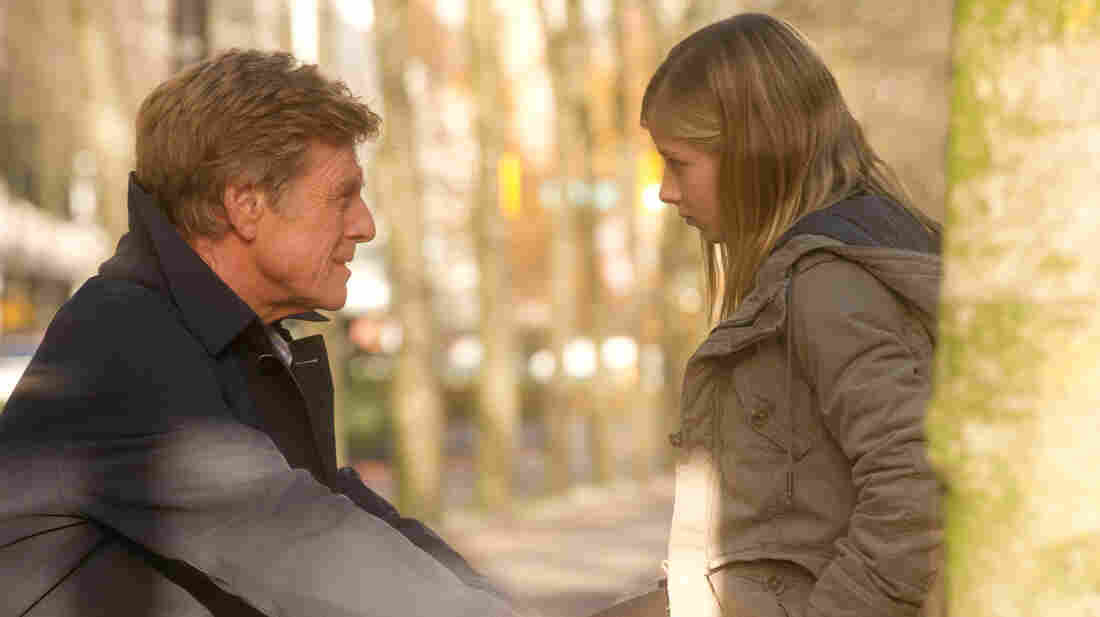 Jim (Robert Redford) must flee with his daughter, Isabel (Jackie Evancho), to the scene of a past crime in order to avoid a probing amateur reporter. Doane Gregory/Sony Pictures Classics hide caption

The Company You Keep

Watch A Clip From 'The Company You Keep' - 'Would You Do It Again?'

'Would You Do It Again?'

'Clearly You Have Some Kind Of An Agenda'

Watch A Clip From 'The Company You Keep' - 'Who Do You Think You Are, The New York Times?'

'Who Do You Think You Are, The New York Times?'

Crisp in execution and classic in ambiance, The Company You Keep is star Robert Redford's most persuasive directorial work since 1994's Quiz Show. It's a pleasure to watch, even if the payoff is rather less substantial than the backstory.

The latter is established by an opening flurry of real and simulated TV news clips about the Weather Underground, the early-1970s leftist group. In this fictionalization, three former members are still wanted for a Michigan bank robbery. (The movie's reference to events of "30 years ago" suggests that this invented crime was inspired by a bloody 1981 armored-truck heist that's been called the Weather Underground's final act.)

One of the fugitives, now living quietly with her family in Vermont, is ready to turn herself in. After Sharon Solarz (Susan Sarandon) is booked by an FBI agent (Terrence Howard), upstate New York lawyer Jim Grant (Redford) is asked to represent her.

He says no, but a link has been implied. Unshaven and inexperienced Albany newspaper reporter Ben Shepard (Shia LaBeouf) begins to investigate Jim, and comes to believe he's actually Nick Sloan, who is also wanted in the robbery.

Belligerent Ben clashes with his editor (Stanley Tucci), as well as an ex-girlfriend (Anna Kendrick) who is now an FBI agent, and with Sharon herself, whose revolutionary instincts he mocks as "groovy." Yet the reporter comes to have grudging respect for Jim, and intuits that the runaway is seeking something other than sanctuary.

On his quest, Jim reconnects with onetime zealots who are wary but friendly, such as a maverick lumberyard owner (Nick Nolte), and others who are less welcoming, notably a paranoid college professor (Richard Jenkins). Eventually, word gets to the person Jim seeks to contact: his former lover (Julie Christie), now engaged in a different sort of underground operation with her current beau (Sam Elliott). 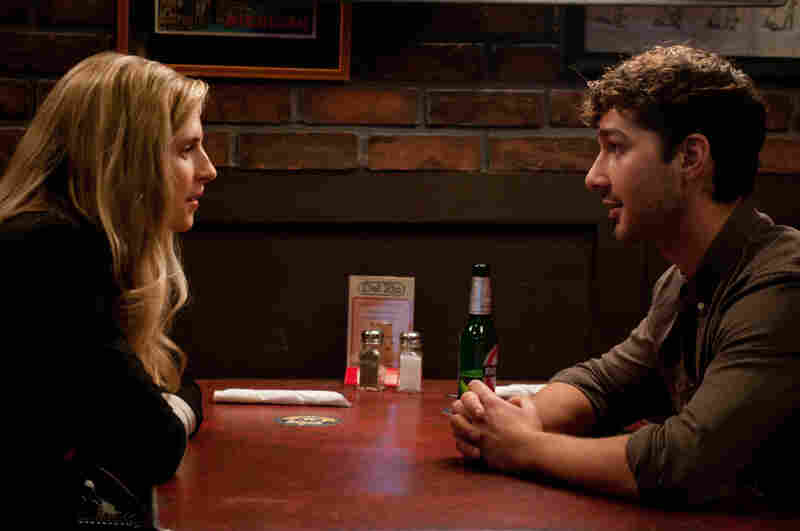 Rebecca (Brit Marling) is an unwilling and confused source for a brash young reporter (Shia LaBeouf) as he digs for the truth behind a violent unsolved 1970s bank heist in Michigan. Doane Gregory/Sony Pictures Classics hide caption 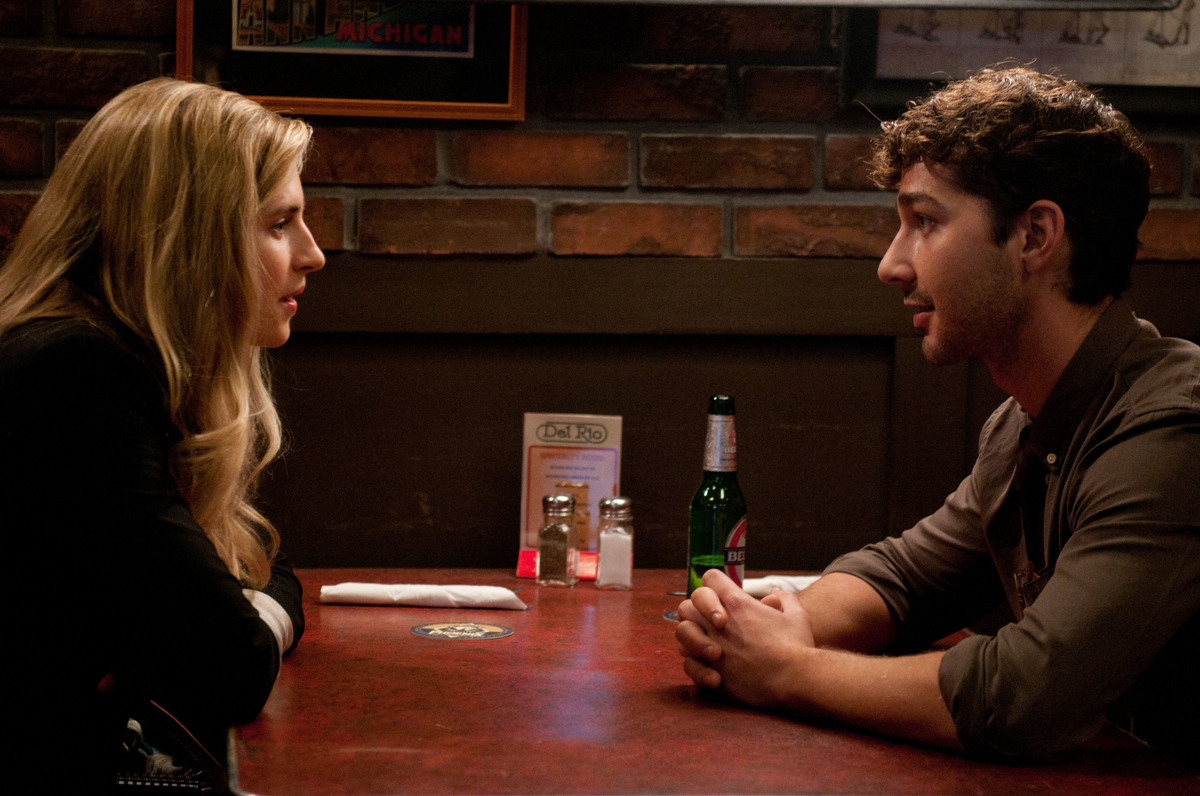 Rebecca (Brit Marling) is an unwilling and confused source for a brash young reporter (Shia LaBeouf) as he digs for the truth behind a violent unsolved 1970s bank heist in Michigan.

Ben also travels to Michigan, tracking the story from a different direction. He interviews a retired police officer (Brendan Gleeson) who worked on the bank-robbery case. Ben also pursues the ex-cop's daughter (Brit Marling), a law student who initially thinks the reporter has a romantic interest in her — perhaps because he sort of does.

A high-profile cast like this one can be a distraction, but Redford neatly uses the familiar faces to conjure the '70s. Old photos of some of them, including Redford with a mustache that can only be called groovy, instantly evoke the era. The technique recalls The Limey, a '90s film that used '60s footage of star Terence Stamp — and was scripted by Lem Dobbs, who also wrote this movie.

Films that take '70s revolutionaries seriously, common in Europe, are rare in the U.S. So it's no surprise when the personal ultimately trumps the political. The movie doesn't entirely dodge New Left views: Sarandon does a fine job with a speech in which Sharon expresses her willingness to do it all again, but "smarter."

But Sharon abandoned the clandestine life because of her kids, and Redford's '70s flashback ultimately becomes — like such predecessors as Running on Empty and German director Christian Petzold's The State I Am In — a parenting parable. There's even a hint of the stolen-kid thriller Gone Baby Gone in a fairly predictable plot twist.

Before settling into such comfortable territory, however, the movie is propulsive and involving. If The Company You Keep is far from radical, it's pretty audacious by the standards of counterrevolutionary Hollywood.