Past Pains, Buried Deep 'Down The Shore'

Past Pains, Buried Deep 'Down The Shore' 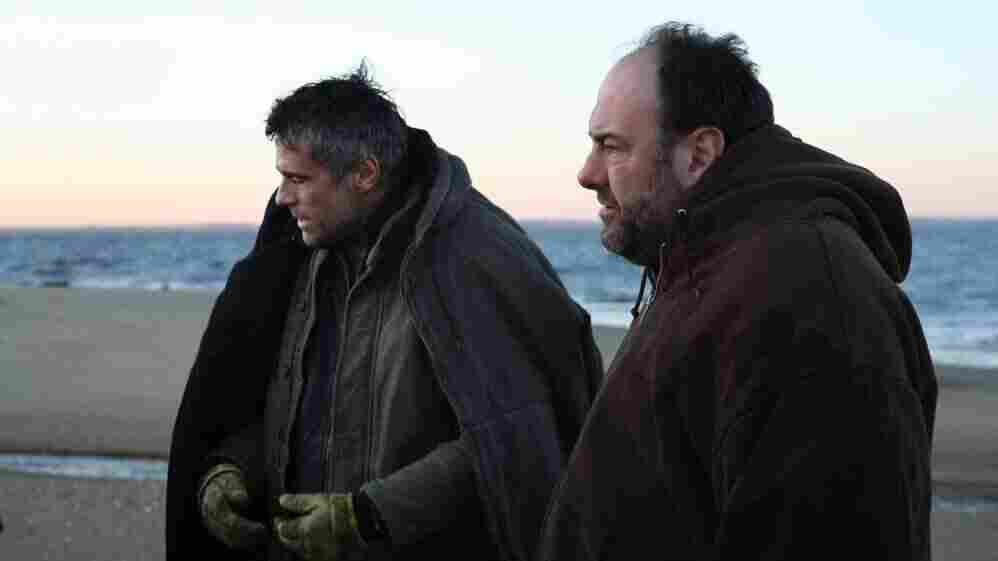 Rated R, language and some drug use

If you want to tell a story, the professional tale-spinners say, make something happen.

That's true, but a happening can be defined as elastically as the teller needs it to be. Sometimes it's a shift in a character's inner landscape — a change in her responses to the common hurts and losses that she's lugged around from childhood — that moves us more than a third-act gunshot ever could.

Down the Shore, a modestly scaled independent film set on the Jersey Shore, is billed as a thriller. That's a stretch: The happenings tucked away in its folds are formative, it's true, and far from trivial, but they're pretty run-of-the-mill — and nowhere near as compelling as the everyday heartache endured by three childhood friends who, as adults, are spinning their wheels in a small New Jersey seaside town.

Two have grown into stoic working people who, accustomed to making do with the familiar hands that they've been dealt, don't talk much. The third is a mess, and someone must be brought in to clean up.

One day a stranger from France knocks on the door of a taciturn carnival-ride operator named Bailey (James Gandolfini), who's been coasting miserably since the disappearance of his beloved sister Susan (Maria Dizzia). The visitor, Jacques (Edoardo Costa), arrives bearing Susan's ashes, the deed to half of Bailey's house and a sack full of money. This doesn't go down well, and for a while, Jacques, who like Bailey works as a merry-go-round operator, seems like a predator muscling in.

With his easy charm and rumpled leading-man looks, Jacques soon makes a go of Bailey's moribund business, drawing in children like the Pied Piper. He wins over Bailey's young helper Martin (John Magaro), the developmentally disabled son of Bailey's childhood sweetheart Mary (Famke Janssen), who's now married to his best friend, Wiley (Joe Pope), a rich wastrel who's frittering away his fortune on crack and venting his frustration on his family.

Intuitively or because he's been primed, Jacques alone sees how trapped these three are by their shared past. Whether Jacques will turn out to be a bounty hunter, an avenging angel or just a friendly pussycat isn't much of a question because Down the Shore isn't much of a thriller. Then again, you might call this resolutely realist drama a fairy tale set in the magical space of an amusement park. There's even some buried treasure.

Shot on location by cinematographer Richard Rutkowski, Down the Shore has a loving sense of place: the clapboard working-class houses huddled together; the tawdry rides — a battered children's train, a roller coaster seat transformed at night into a shining globe — offering nostalgia for happier days and brighter moods than the low-key sufferings endured by Bailey and Mary now.

In due course we'll find out why, but it's less the wait for that revelation than the faint crackle of an all but extinguished charge between this exhausted pair that drives the film. Imaginatively cast against type (director Harold Guskin is a respected acting coach), Gandolfini and Janssen dance a delicate minuet around one another, pacing out a slow, quiet revelation of the shared past that has paralyzed their wills to happiness and change.

Illness, death, bad fathers and bad marriages, suppressed old loves — there's nothing new here, yet we are held by the way ordinary suffering has hardened into an emotional prison for three old friends.

One way or another they will be sprung, as fairy tale prisoners always are. But I liked how the granter of wishes remains an ambiguous prince to the end.

"I can't tell if you're a good man or a f - - - -n' con artist," Bailey tells Jacques, shaking his head in wonder. Isn't that true of most knights in armor?