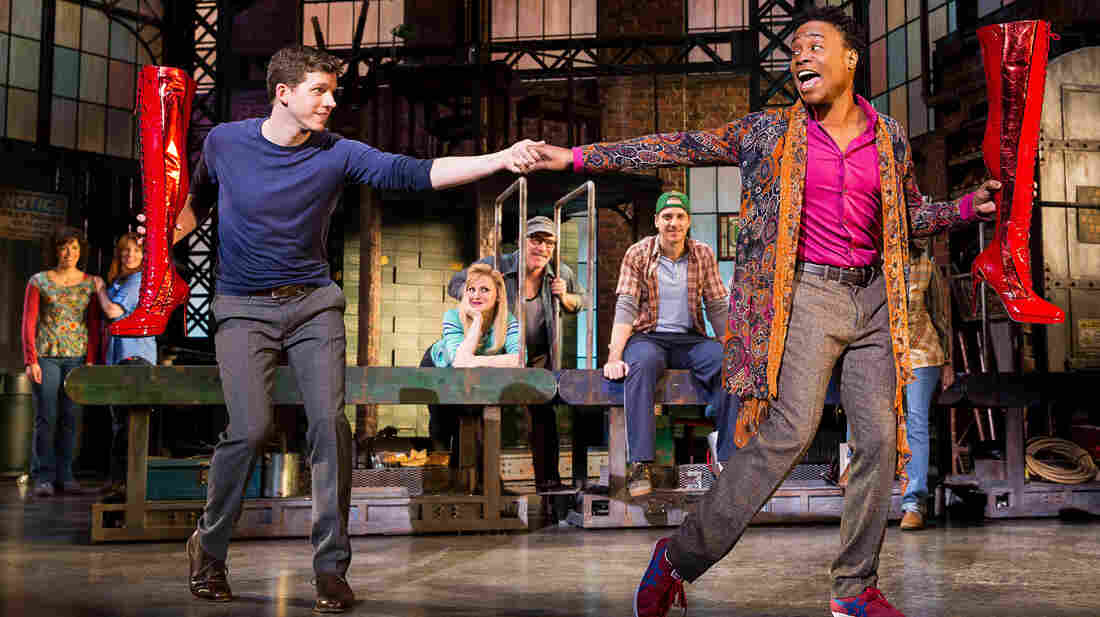 Watch A Clip From 'Kinky Boots' - 'Everybody Say Yeah'

Watch A Clip From 'Kinky Boots' - 'Raise You Up'

Watch A Clip From 'Kinky Boots' - 'Sex Is In The Heel'

'Sex Is In The Heel'

If you ask Billy Porter, one of the lead actors in the Broadway musical Kinky Boots, what the show's about, he's got a succinct answer:

"It's about two people who have daddy issues," Porter says. "And one of them just happens to wear a dress."

Porter would be that guy: He plays Lola, a fabulous drag queen who inadvertently helps save a failing shoe factory in the English Midlands. And he gets to sing fabulous songs — by Cyndi Lauper.

More than four years ago, Lauper was asked by her good friend Harvey Fierstein if she'd like to write a musical with him. Although she'd never written one before, she was intrigued by Kinky Boots, a 2006 indie film based on the real story of a shoe-factory owner who teamed up with a drag artist to create sturdy but sexy drag boots for men. She says Fierstein was full of song titles, right from the start.

Fierstein, who also wrote the script for the musical version of La Cage aux Folles, took Lauper under his wing — he affectionately refers to her as "my daughter" — and taught her about writing songs for the stage.

"You know, her lessons were a lot of fun for me," Fierstein says. "Frustrating sometimes, but fun on the other hand. Like the first time I took a song of hers and I stopped the song and put the scene in the middle of it and then they kept singing and then more scene. And she said, 'What the hell are you doing? What are you doing to my song? Let them sing the g- - - - -n song!'

"I said, 'It's not the way it works,' " Fierstein says. " 'You wouldn't do that to Rodgers and Hammerstein!' [she said]. And I said, 'Well, you actually would.' And I showed her some examples — I think, 'Some Enchanted Evening,' which has a scene in the middle of it. And she said, 'Oh, I didn't notice.' And I said, 'Exactly. When it's done right, you will never notice.' "

Lauper says she realized that writing theater songs and writing pop songs had a lot in common.

"You need to be economical; you have to say something simply," Lauper says. "I believe you still can have poetry. Now, Harvey believes it has to be in the most stupid, simple terms, but I think he believes in poetry!" 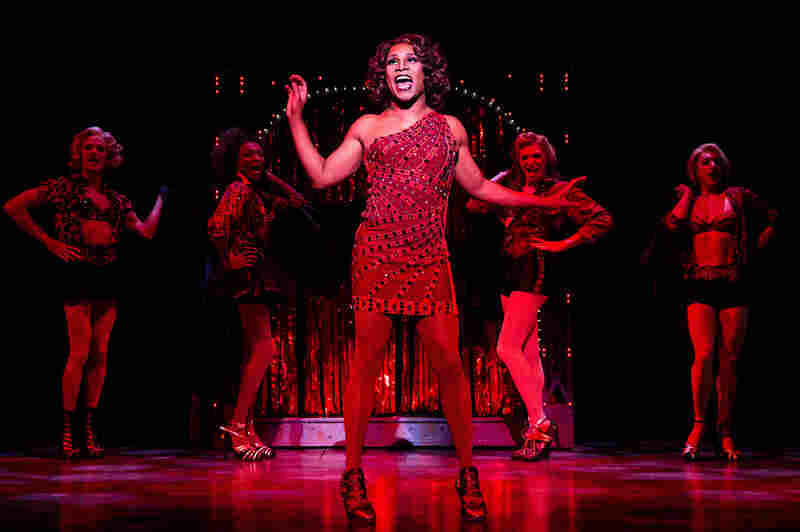 His character may be a flashy dresser, but Porter says Kinky Boots is just a simple story about two men trying to understand themselves — and each other — a little better. O and M Co. hide caption 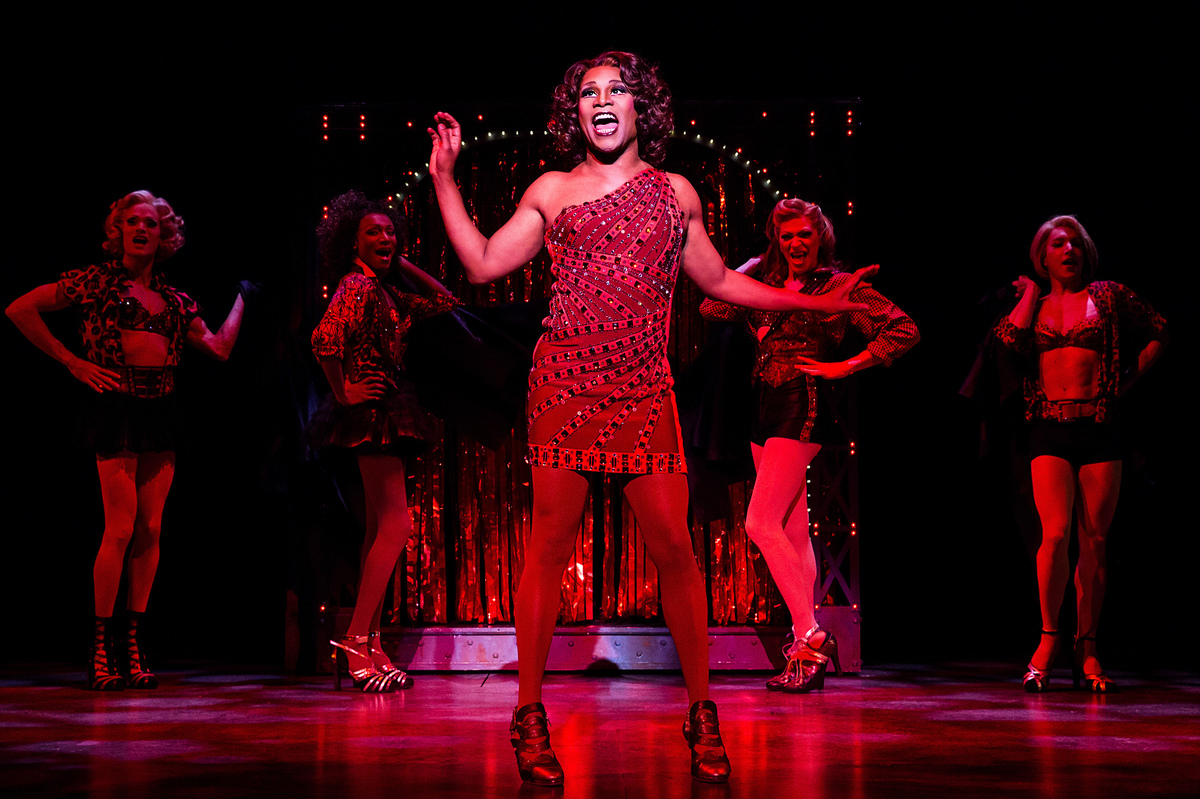 His character may be a flashy dresser, but Porter says Kinky Boots is just a simple story about two men trying to understand themselves — and each other — a little better.

At its heart, Kinky Boots, which opens April 4 at the Al Hirschfeld Theatre, is a bromance between the strait-laced factory owner Charlie and the flamboyant drag queen Lola. They learn to accept each other — and themselves — through their friendship.

"You know, it's really about these two guys who at first glance are completely different, but underneath have so much in common," says Stark Sands, who plays Charlie.

Director Jerry Mitchell says the experiences of Charlie and Lola — while very specific — are universal, too.

"I don't think there's anyone who doesn't go through some sort of realization, in their life, as [they're] becoming an adult, how you measured up in your father's eyes, for better or for worse," Mitchell says. "And that has real resonance."

Lauper tapped into that feeling with the first-act ballad "I'm Not My Father's Son." She says she wrote it while walking on the track in her gym one morning.

Porter, who as Lola gets to wear 6-inch heels and gorgeous frocks and dance with a chorus of drag queens, says Kinky Boots may surprise some people.

"It masquerades as a big, splashy musical," Porter says. "But, actually, it's a really small, intimate story that just happens to have these fabulous numbers."