Accessibility links
Lawyers Join Doctors To Ease Patients' Legal Anxieties A compatible medical-legal partnership may sound like an oxymoron. But in hospitals and clinics across the country, doctors are welcoming lawyers into their practices. They say a lawyer may be just the prescription for some patients with intractable legal needs. 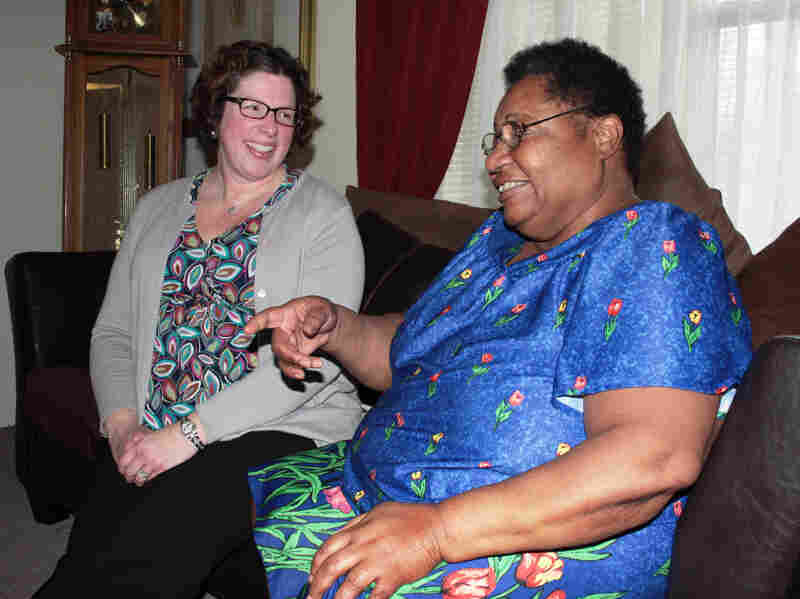 Lawyer Meredith Watts (left) visits client/patient Shirley Kimbrough at her apartment in north Akron, Ohio. Kimbrough is being helped by a program under which lawyers partner up with health providers to supply patients with legal advice. Jeff St. Clair/WKSU hide caption 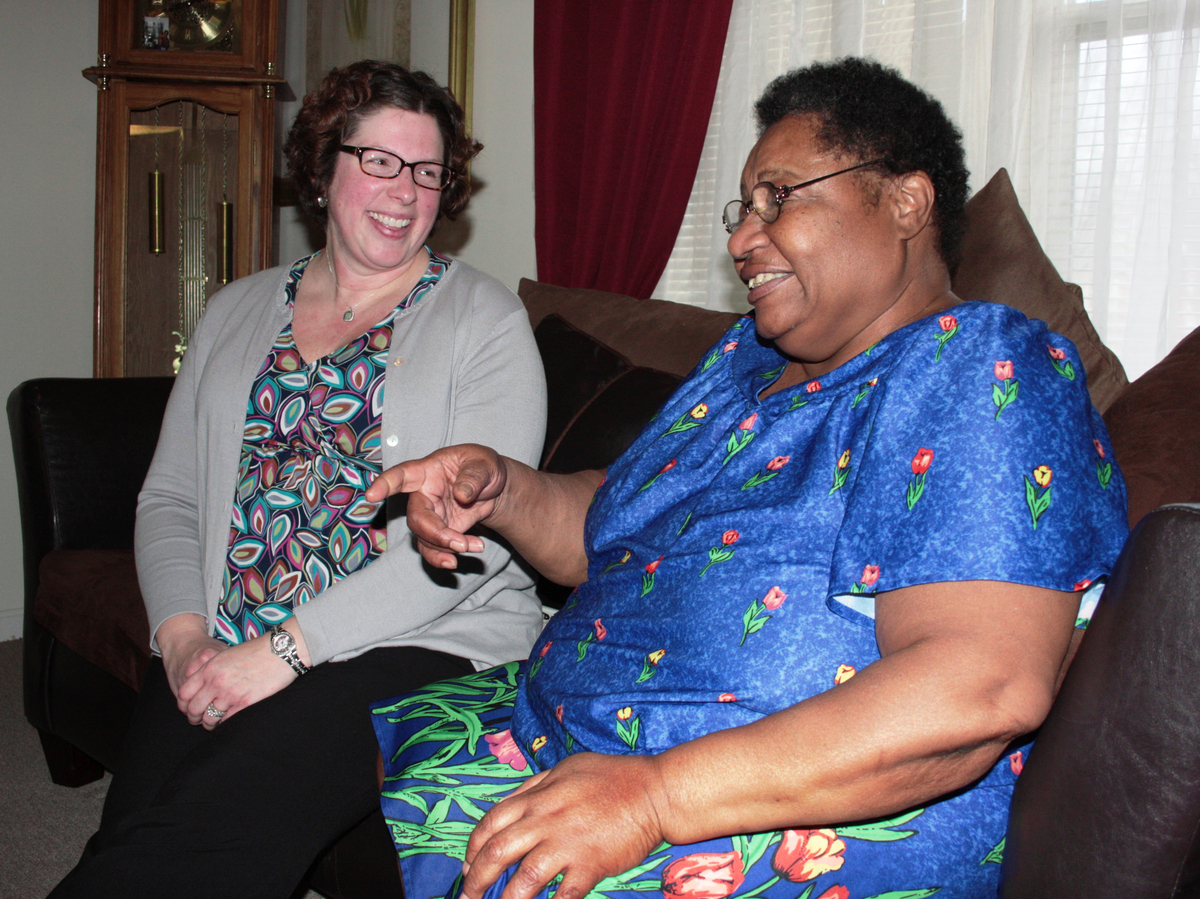 Lawyer Meredith Watts (left) visits client/patient Shirley Kimbrough at her apartment in north Akron, Ohio. Kimbrough is being helped by a program under which lawyers partner up with health providers to supply patients with legal advice.

Two professions that have traditionally had a rocky relationship — doctors and lawyers — are finding some common ground in clinics and hospitals across the country.

In Akron, Ohio, for instance, doctors are studying how adding a lawyer to the health care team can help improve a patient's health.

As a TV drones in the background, about a dozen women and children wait for their names to be called at the Summa women's clinic in Akron.

In the clinic's conference room, Meredith Watts is awaiting her next case. She's not a doctor or a nurse. She's a lawyer who specializes in housing and consumer work.

Watts works for Community Legal Aid, a nonprofit that gives free legal help to low-income people in eight Ohio counties. Her firm is housed in a downtown office tower. But Watts prefers working out of the clinic.

"So if somebody comes in to the clinic and they get sent to me and it's a housing problem and I'm here, I can give them advice directly on site," she says.

Watts' role on the team is to help solve issues that might affect a patient's health but are outside a doctor's control.

"Let's say you're under threat of eviction because of something that happened," she says. "That's going to cause a significant amount of anxiety, potentially, and then you're suffering from these anxiety problems that wouldn't have happened if we had been able to intervene and perhaps help with the eviction problem," she says.

A Type Of Preventative Law

And, as a lawyer, Watts makes house calls. One of her clients, Shirley Kimbrough, lives in a subsidized housing unit in a north Akron neighborhood.

The clinic referred Kimbrough to Watts, who last year helped her move into this handicapped-accessible apartment to care for her disabled granddaughter.

"If I hadn't had her to help me I would have lost my granddaughter because I had already lost my daughter, and I don't think I could have stood that," Kimbrough says.

"It's exciting to be able to do what we think of as preventative law, rather than always being crisis intervention because you can help something not happen, before it becomes a crisis," Curry says.

'It Doesn't Make Any Sense'

But not all lawyers are quick to embrace a cozy new relationship with their old adversaries.

"I don't understand how a medical clinic needs an attorney to be a part of its team. It doesn't any make sense to me," says Allen Schulman, a malpractice attorney in nearby Canton who takes a more traditional view of the two professions.

But back at the Akron women's clinic, researcher Michele McCarroll says doctors here like having a lawyer down the hall from the examination room.

"We are trying to meet the needs of the patients right here on site in kind of a one-stop shop where we know things ... such as social issues, can make a difference in health issues," she says.

McCarroll and Akron's Community Legal Aid lawyers have enrolled 100 women in the first randomized study to determine whether having a lawyer on-site really does improve health outcomes.

They're measuring conditions like blood pressure, stress and other health factors in two groups of women who had legal issues. One group was introduced to a clinic lawyer; the other group was given a number for the legal help line.

They plan to present their results next week at the national Medical-Legal Partnership Summit in Washington.

The audio of this story, as did a previous Web version, incorrectly identifies Michele McCarroll as a physician. McCarroll is a researcher and holds a Ph.D.