Accessibility links
Even Dictionaries Grapple With Getting 'Marriage' Right Lexicographers know they're in the hot seat as they confront the changing use of the word "marriage." Linguist Geoff Nunberg says the key to getting the new definition right is to crisply describe everything that's in the category and nothing that isn't. 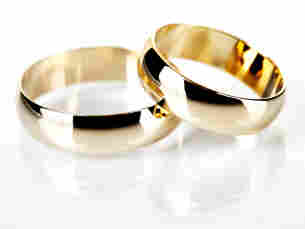 It's a funny thing about dictionaries. First we're taught to revere them, then we have to learn to set them aside. Nobody ever went wrong starting a middle-school composition with, "According to Webster's ..." but that's not how you start an op-ed commentary about terrorism or racism. When it comes to the words that do the cultural heavy lifting, we're not about to defer to some lexicographer hunched over a dusty keyboard.

Except, of course, if the word is "marriage." Now that even a lot of Republicans are accepting civil unions as a fallback position, what opponents of same-sex marriage object to most strenuously seems to be just its name. As a tactical move, thumping the dictionary has replaced thumping the Bible. As Rush Limbaugh recently put it, "By definition, same-sex people cannot be married." You had the feeling that that "by definition" was really a stand-in for "by God."

Merriam's insisted that it had no political agenda; it was just describing the language as it was actually being used. But the entry is a train wreck, which is what's apt to happen when you try to move forward while looking over both shoulders at the same time. That second definition doesn't describe the way anybody uses the word. Gays and lesbians aren't claiming the right to a recognized relationship "like traditional marriage." They're talking about marriage without an asterisk, which is one reason why public opinion has shifted so rapidly in their favor. And the cultural right isn't about to sanction any use of the M-word for same-sex couples. The one thing both sides agree on is that whatever definition you give to "marriage," there had better be just one of them.

That's how the most recent edition of the Encarta dictionary deals with the word, with a single definition that eliminates any reference to gender: "a legally recognized relationship ... between two people who intend to live together as sexual and domestic partners." That's a redefinition of marriage, all right. But redefining a word isn't always the same as giving it a new meaning. Sometimes you're just trying to pare it down to the core concept that people missed the first time around. Dictionary definitions of "camera" used to mention film and plates; now they just refer to a photosensitive surface. But the meaning of "camera" isn't different; it's just that now technology lets us see what its essence has been all along.

Changes in social attitudes can prompt those re-evaluations, too. Until just a couple of years ago, the Oxford English Dictionary defined the romantic sense of "love" as "[a] feeling of attachment ... based upon difference of sex." But the English language has never precluded describing a romantic attachment between two men or two women as love. It's just that those relationships were officially invisible to the OED's Victorian compilers. And other definitions would have led you to conclude that only men could have girlfriends or pay court to someone. In fact, the OED still defines a "couple" as "a man and a woman united by love or marriage." No doubt they'll get around to replacing "a man and a woman" with "two persons" — not because "couple" has a new meaning, but because we can finally see what was really basic to the old one.

You can read Encarta's de-gendered definition of "marriage" in the same way. "A legally recognized relationship ... between two people ... " does what a good definition should: It crisply describes everything that's in the category and nothing that isn't. And like the redefinition of "camera," it extends to the past as well as the present. That's not just what "marriage" has come to mean; it's all the word has ever meant, even when not everybody had the right to it.

It can take people awhile to get used to that. "Marriage" is more than a label to both sides. Words tend to pick up the flavors of the broth they've been steeping in: They're surrounded by customs and prescriptions that seem to infuse their very meanings. When I hear somebody using a word in a new way, it can sound more like a usage error than a challenge to my unexamined notions. I had to do a little mental stutter-step the first couple of times I heard a gay friend talking about his husband. Until I realized, "Oh, I see — it's just the guy in a marriage, the same as it ever was."

But there has never been an age that was so quick or adept at making these adjustments. We spent the 1990s tacking "virtual" and "cyber" onto the names of what seemed like new kinds of things. Then we spent the next one taking the prefixes off again, as we realized that the new things were fundamentally the same as the old ones. "I have to get some e-money from my virtual bank so I can play cyber-poker" — that sounds so 1997. How long before "gay marriage" sounds equally quaint?